Heavy equipment producer Caterpillar (CAT) has returned to the Green Favored Zone of the SIA S&P 100 Index Report for the first time since June of 2021. Continuing a climb back up the rankings that started in the red zone back in October, the shares finished in 22nd place yesterday up 3 spots on the day and up 28 positions in the last month.

Back in October, a downward trend in Caterpillar (CAT) bottomed out with a series of successful support tests near $190.00. The shares then spent a few weeks base-building and in the last month or so, have come under renewed accumulation. In recent weeks, the shares have snapped out of a downtrend, regained and held above their 50-day moving average, launched up off of the 50-day average and blasted through $220.00 to complete a bullish Ascending triangle pattern and have continued to climb. Since the start of this month, bullish signals have occurred on increased volumes, a sign of renewed accumulation.

With the $220.00 breakout point reversing polarity to become new support, initial upside resistance appears at the June peak just above $240.00. A breakout there would confirm the start of a new advance with next potential resistance near $250.00, $280.00 and $290.00 based on measured moves from recent and current trading ranges.

Since peaking back in June, Caterpillar (CAT) came under distribution staging a series of bearish pattern breakdowns as that corrected part of a previous advance before stabilizing over November and December. This month, accumulation has resumed with the shares snapping a downtrend line and completing bullish Double Top and Spread Double Top patters to signal and then confirm the start of a new upswing.

Initial resistance appears at the June peak near $242.20, where a breakout would signal that the previous upward trend has resumed. Horizontal and vertical counts suggest next potential resistance after that may appear near $257.00, $278.20 and $295.25. A failure would suggest the current consolidation trend continues with initial support possible near $210.85 based on a 3-box reversal and a retest of a recent breakout point. . With a bullish SMAX score of 9, CAT is exhibiting strength against the asset classes. 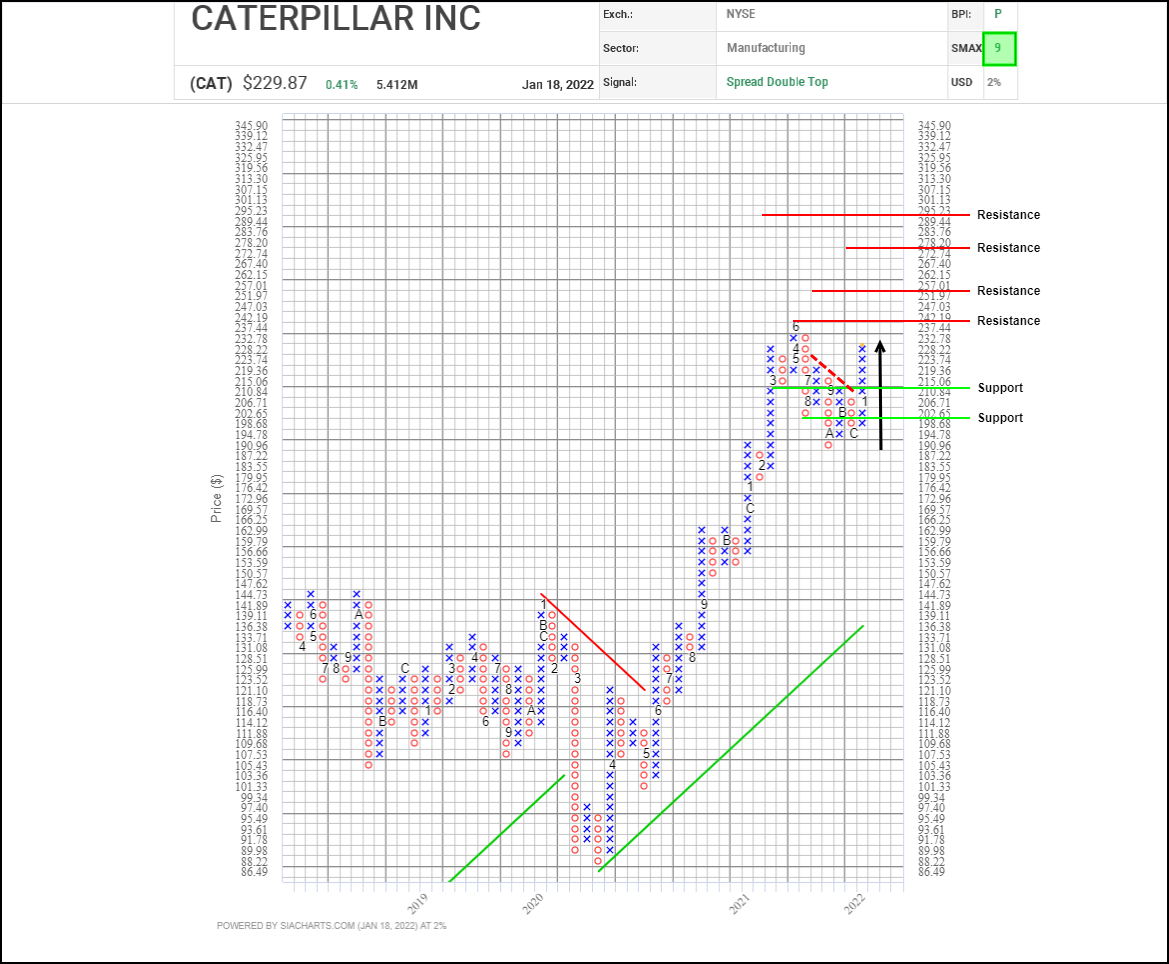