This holiday-shortened week has found major North American indices including the S&P 500, S&P 100, NASDAQ Composite, S&P/TSX Composite and Dow Jones Industrial Average in a holding pattern at or near the all-time highs. The Dow Transports have slipped a bit while the Russell 2000 rallied to another new high.

Trading action across sectors continues to reflect broad based positive sentiment toward stocks with a wide variety of groups posting gains including several Financials (Banks, Insurance and Consumer Credit), Technology, Homebuilders, and Retailers.

News flow has also been positive with US politicians close to signing off on deals to keep their government operating and to continue COVID-related financial support for individuals. Meanwhile the vaccine rollout continues to accelerate with Moderna’s vaccine reaching or nearing approval in several countries.

The coming week between the Christmas and New Years holidays is commonly one of the quietest of the year with many market participants set to take a break, particularly after such a tumultuous year for markets. Several month-end economic announcements, like the US GDP update, came out this week, so the main events for next week are the US Chicago PMI and Chinese PMI reports scheduled for Wednesday-Thursday.

The following week, January 2021 kicks off with the usual flurry of monthly PMI, employment, auto sales and construction reports.

In this week’s issue of Equity Leaders Weekly, we take a look at what a breakout by the Russell 2000 Index and a breakdown by the Dow Jones Utilities Average are telling us about the current state of investor sentiment. 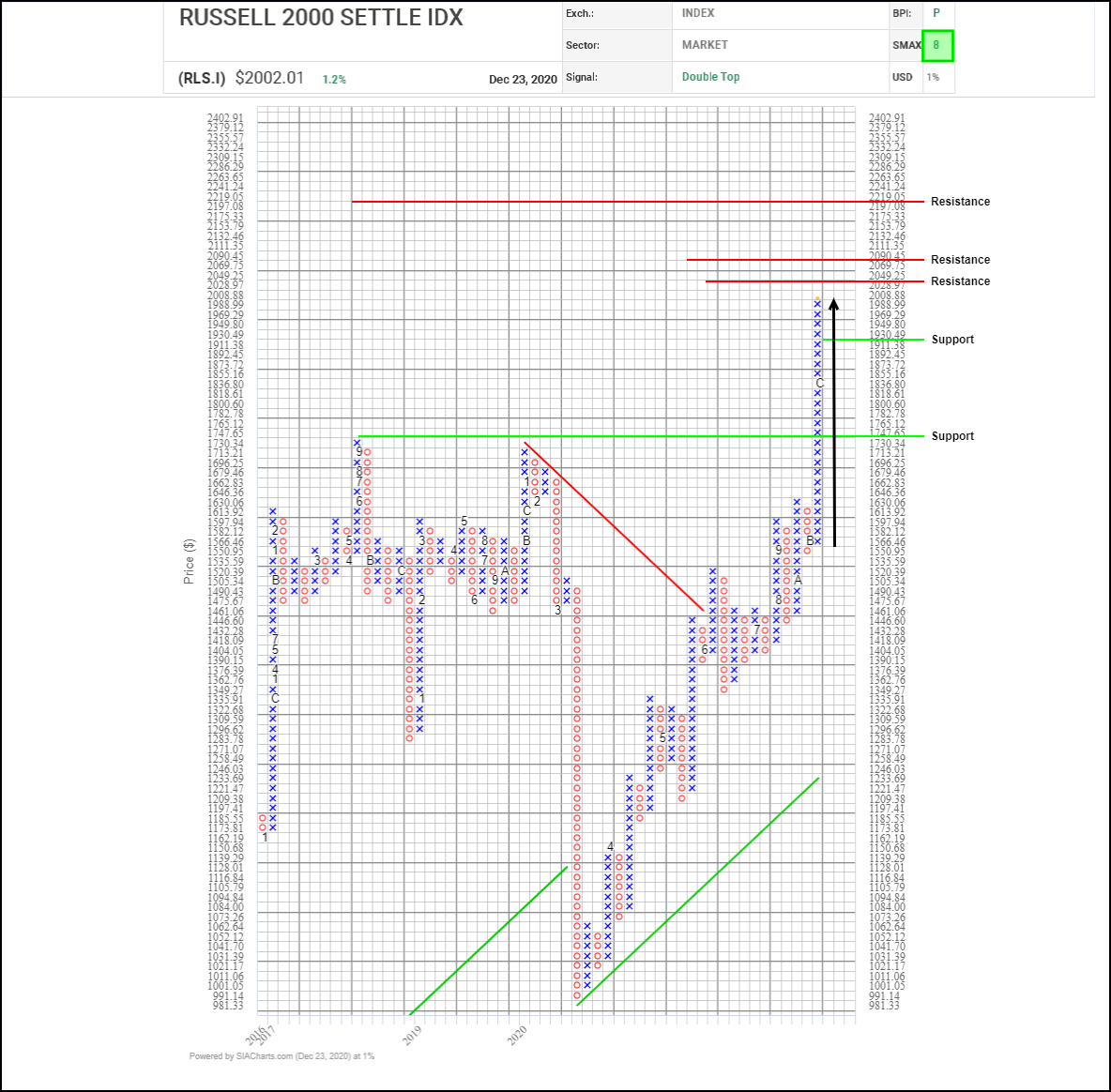 Moves by the Russell 2000 (RLS.I) index of small cap US companies is commonly seen by investors as an indicator of market breadth and for confirming/rejecting moves made by large cap indices (are the troops following the generals?)The Russell 2000 Index spent the 2018 to 2020 period stuck in a trading range between about 1350 and 1750. Earlier this year, the Russell 2000 failed to confirm new highs made by large cap indices which turned out to be a bearish sign as world markets collapsed a few weeks later. Since the market bottom in March, the Russell 2000 has been trending upward along with other indices, but at a slower pace than some of its peers.

Gains for the RLS.I have accelerated since November with the broad small cap index breaking out to a new all-time high last month which confirmed highs made by other indices, and continuing to climb, reaching the 2000 round number this week. Gains and confirmations made by the Russell 2000 indicate that we are in a broad-based bull market with wide participation, not the narrow big cap rally we saw at the peak back in January/February. 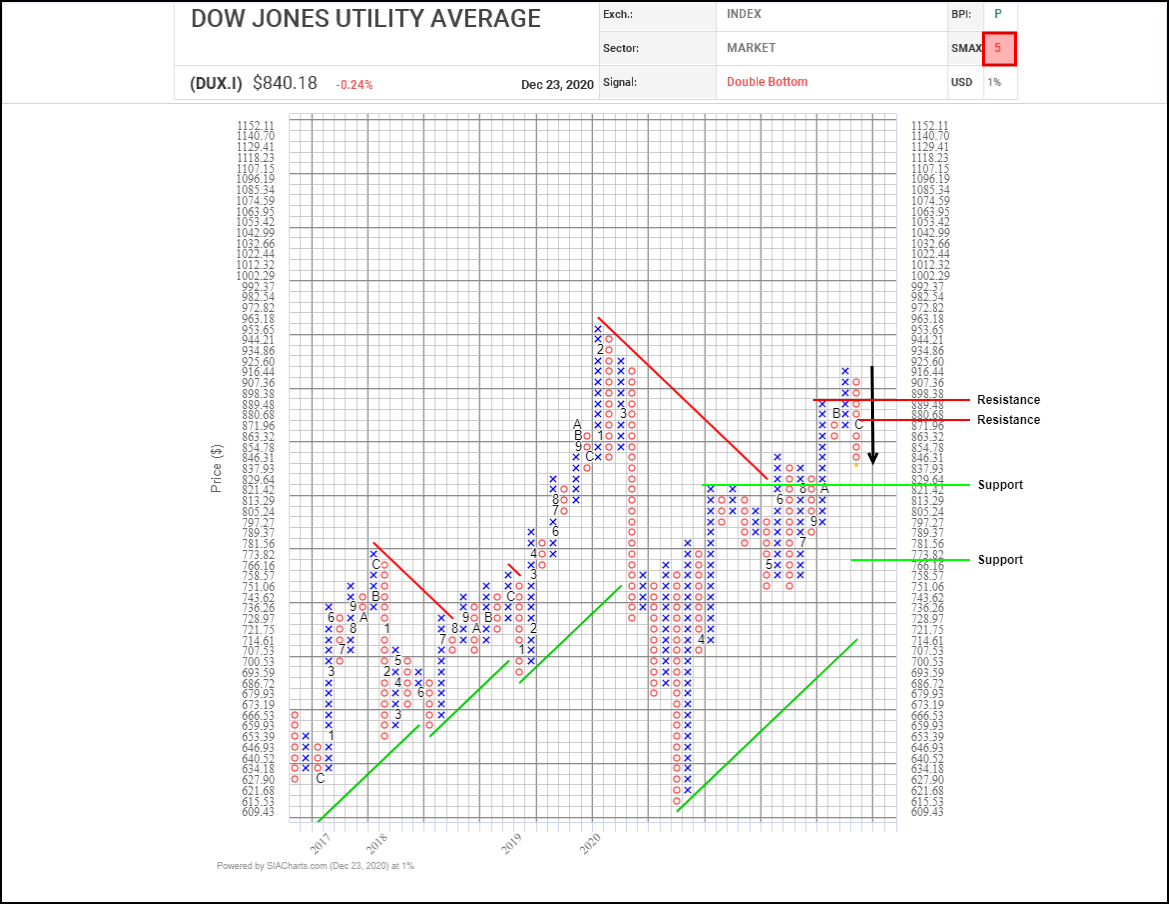 One sign market participants look to for an indication of investor confidence and the willingness to take on risk is capital flows between defensive and aggressive stances. One example of this dichotomy has been the downward trend in gold and silver and the upward trend in emerging markets that has developed since the summer.

Another clear example of capital leaving defensive areas of the market has emerged this month is the downturn in the Dow Jones Utilities Average (DUX.I), particularly when contrasted by the recent catchup rally and then move to new highs staged by the Dow Jones Transportation Average, a part of the market which had previously been hit hard by COVID lockdowns.

The Dow Utilities recently faltered at a lower high near 925 and this week they have turned decisively downward, breaking below 850 to complete a bearish Double Bottom pattern to signal the start of a new downtrend. A bearish SMAX score of 5 also reflects weaker performance relative to the asset classes. This downturn confirms that capital continues to move out of defensive havens as confident investors seek higher potential returns in other sectors.

Initial downside support for DUX.I appears at a previous breakout point near 820, followed by 765 based on a horizontal count. Initial upside resistance appears near 880 based on a 3-box reversal.