Trading action across equity markets has been choppy this week as investors grapple with the implications of increased speculation that the easy money party of the last year could start to wind down, and what a potentially reopening economy over the next 6-9 months could mean for the relative outlook of varying sectors.

With vaccines rolling out and US economic prospects improving, the US 10-year treasury note yield pushed up above 1.50%, spooking some traders and sparking a round of profit taking in high growth, richly priced momentum sectors, such as technology and health care, leading to a sharp correction in the NASDAQ Composite which is dominated by those groups. Capital leaving those groups appears to be rotating into economically sensitive groups such as industrials and construction, and sectors which had been heavily impacted by COVID lockdowns but now have the potential to catch up such as energy, airlines, real estate, and others.

Some of the concerns about rising rates appears to have eased in the last 24 hours. The US 10-year treasury note yield has levelled off between 1.50% and 1.60% as the US monthly consumer price report indicated that inflation remains subdued, while the Bank of Canada indicated that even though recent economic conditions have been stronger than expected, there remains significant slack in the system and because of this, it intends to continue asset purchases at current levels for the foreseeable future.

News flow over the coming week is dominated by several more central bank meetings which investors may look to for insights into economic conditions and monetary policy trends. The European Central Bank meets today, followed by the US Federal Reserve Board next Wednesday and the Bank of England plus the Bank of Japan a week from today. Other economic announcements of note include Canadian employment on Friday and US retail sales on Tuesday.

In this issue of Equity Leaders Weekly, we look at energy and technology ETFs as indicators of changing relative strength and tactical capital rotation between sectors as leadership changes. 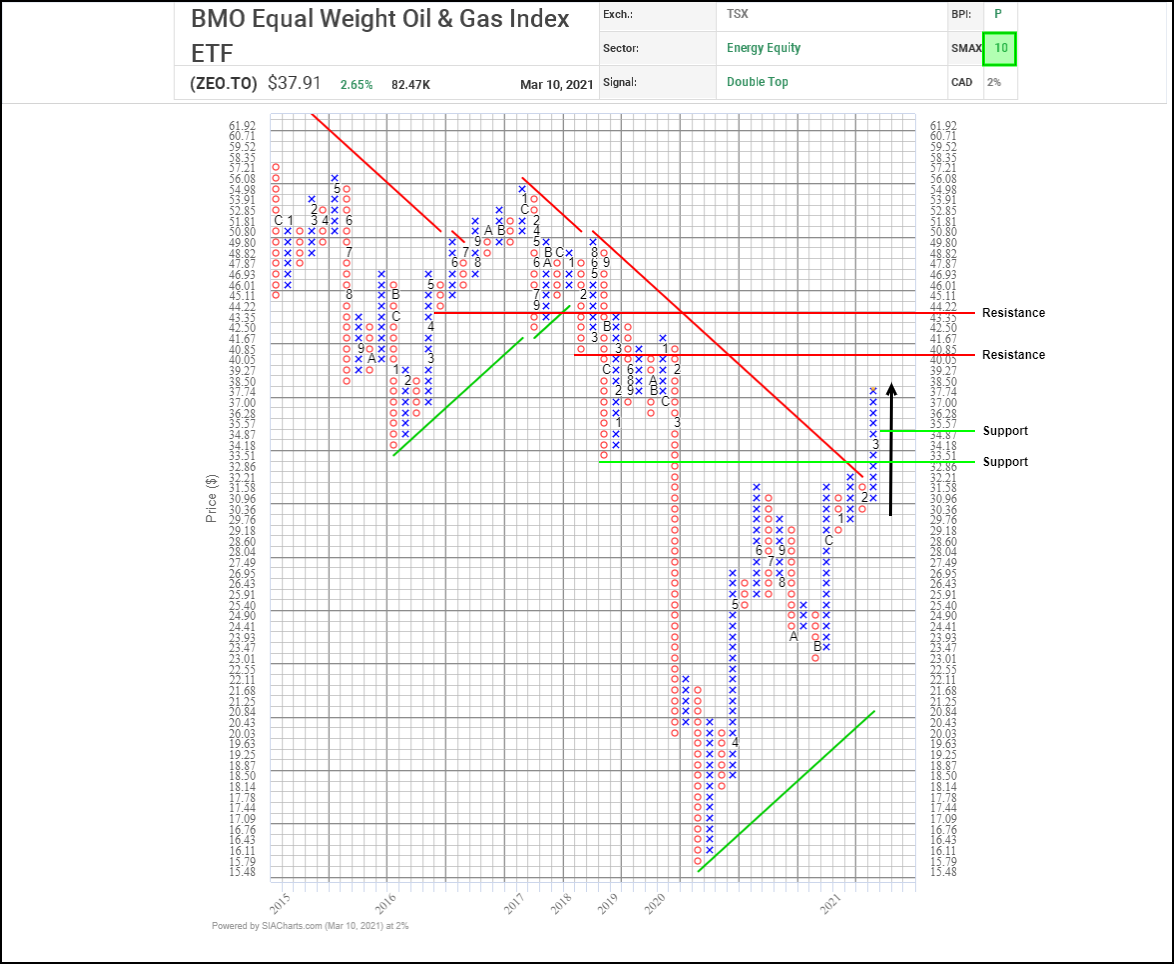 Energy stocks had already been under distribution for several years when last year’s stock market selloff and concurrent oil price plunge cratered the sector. After staging an initial bounce last spring, energy stocks and energy commodities levelled off for several months. Since October energy stocks have come under renewed accumulation, catching a tailwind from a number of factors primarily continued gains for oil and gas prices.

Sentiment toward the energy sector has improved in recent months as previous headwinds have reversed and become tailwinds. Fiscal and monetary stimulus and a smaller impact of Wave 2 lockdowns on economic activity and energy demand compared with Wave 1 has helped to shore up demand. Meanwhile, OPEC+ has continued to manage supply through the large demand swings of the last year, and recent winter weather events in North America and Europe have reminded investors that alternative energy competition has limitations.

The BMO Equal Weight Oil & Gas ETF (ZEO.TO) completed a bullish Spread Triple Top breakout in January, then snapped a downtrend line in February to confirm the start of a new advance which has continued into March. Next potential upside resistance tests on trend appear near $40.85 and $44.25 based on a combination of previous column lows and vertical/horizontal counts. 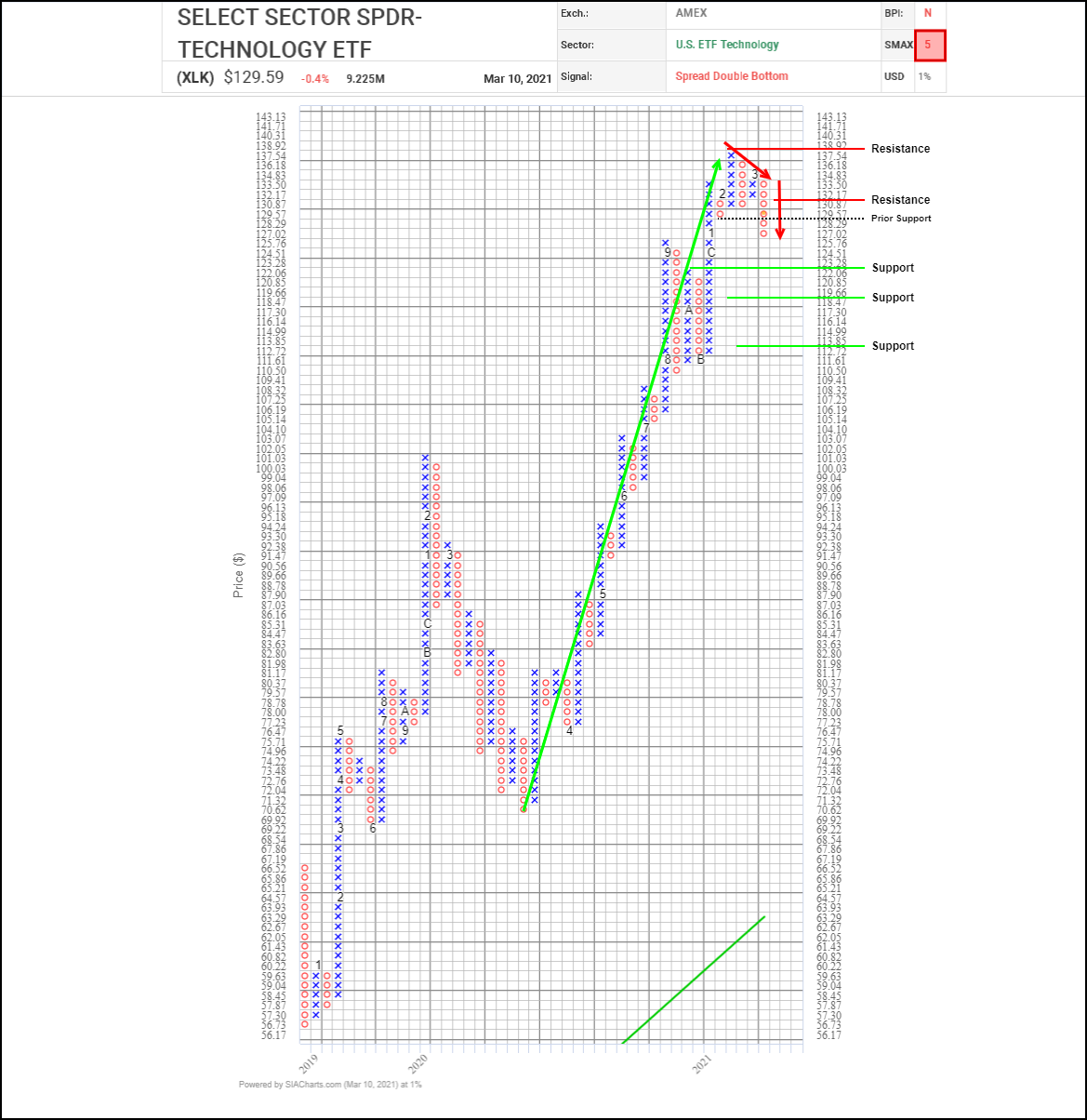 In the recovery from the March 2020 market bottom, Technology was one of the sectors which had led the charge as many technology companies benefitted from the shift to a stay-at-home economy. In recent weeks, however, interest in tech has started to recede. There are a number of factors for this including speculation that growth momentum for some technology stocks could slow as the economy reopens and investors taking profits in richly valued growth stocks and rotating into cheaper, lagging and value stocks looking for catchup situations.

The Select Sector SPDR Technology ETF (XLK) regained all of its winter 2020 losses and broke out to a new high in June of 2020 and continued to steadily climb through to February 2021, shrugging off a September 2020 correction along the way. In recent weeks, signs of distribution have emerged with a downtrend of lower X column highs emerging in XLK, followed by two bearish breakdowns, a Double Bottom, followed and confirmed by a Spread Double Bottom. In addition, XLK’s SMAX score has dropped to 5 indicating weakness relative to the asset classes.