With the Canadian Federal election in full swing, the Liberal party made the news yesterday with an announcement

targeting the profitable Canadian financial sector to help pay the enormous and growing national debt. This announcement has come during a week where the major Canadian Banks have posted earnings with Royal Bank, National Bank, Bank of Montreal, and Bank of Nova Scotia all beating their earning estimates. With Trudeau's government overseeing the largest increase in federal debt per person of any prime minister, their party is looking at some ways to curb this spending with these increases of taxes on Canada's largest banks and insurance companies by 3% (on earnings over $1B) could generate $2.5 billion per year over the next four years (starting in 22-23).

stimulus and potential timing for interest rate hikes. The main U.S. indices have hit new highs earlier this week, but most likely the markets will be relatively flat until after this important summit. The S&P 500 Index did close at a record yesterday crossing the 4,500 threshold for the first time ever for an intraday high but closing on the day just below this level. Unexpected commentary from the Fed could bring additional volatility to the stock and bond markets.

In this issue of Equity Leaders Weekly, we look at how the strength of the US economy does not seem to be coming from the small cap stocks, while in Canada, the Big Banks continue to post exceptional earnings which has drawn the eye of new potential taxes against the Canadian Financial sector announced by Trudeau as part of his parties' campaign. 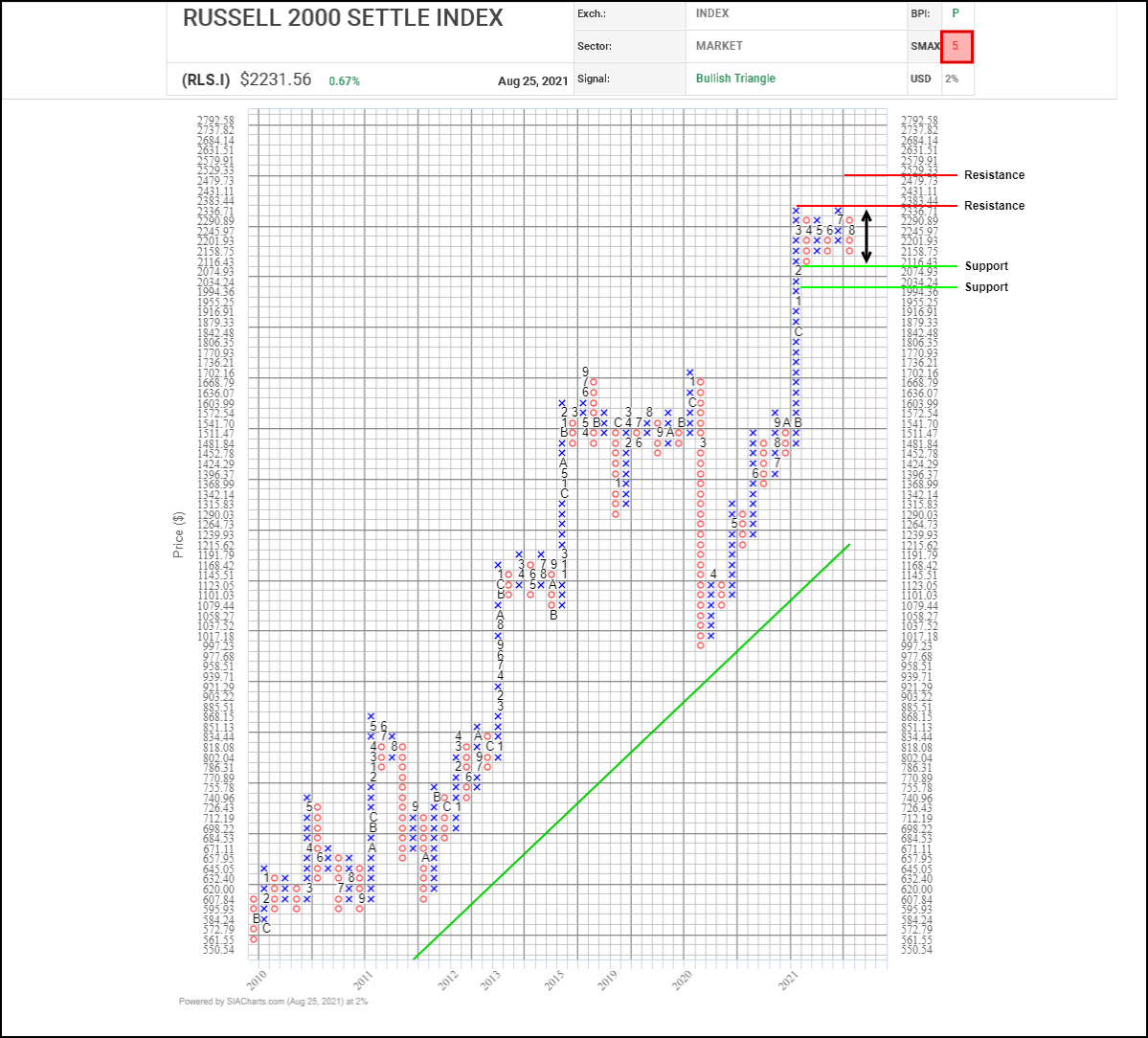 The Russell 2000 Index (RLS.I) represents the US small-cap stocks and is relatively used to represent the broader US market outside of the largest 1,000 companies (the Russell 1000 Index). In recent days, we have seen the US indices like the Nasdaq and S&P 500 Index hit new all-time highs while the small-cap stocks haven't been able to quite break through and have been stuck in a range.

Resistance is found at the top of the range at 2,383 with further resistance found at 2,529 if it does break out of this channel. Support is found to the downside near the bottom of the range at 2,074-2,116 and again around the 2,000 level should price break down. While the other indices have moved to new highs, the RLS.I has been trading sideways since March in this range. Potential reasons for this could include investor enthusiasm for small cap stocks fading as margin lending was reeled back in, retail investors redeploying capital elsewhere, and potentially some sector rotation as Health Care and Information Technology sectors (which RLS.I has around a 30% exposure to) not outperforming as much as they did last year.

With a SMAX of 5 out of 10, the RLS.I is not showing near-term strength versus other asset classes in its recent pull-back. We would expect this to change potentially if it moves into a column of X's above the 2,291 level. 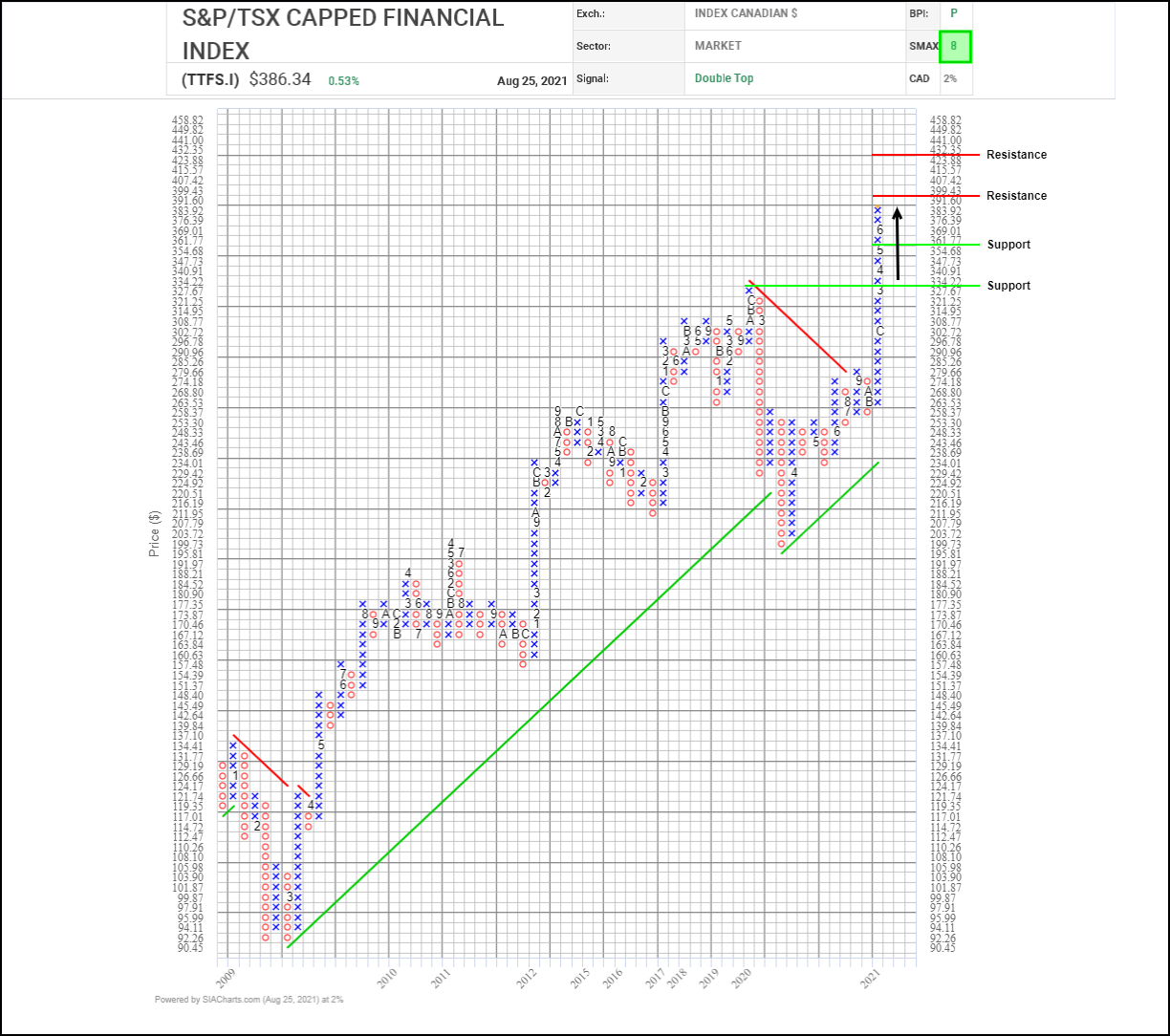 The S&P/TSX Capped Financial Index (TTFS.I) and the Canadian Banks made the news yesterday when Prime Minister Trudeau announced he would increase the corporate tax rate on big banks and insurance companies by 3% from 15% to 18% on all earnings over $1 Billion.

Trudeau said these measures would generate around $2.5 billion per year over the next four years starting in 2022-23.

Opposition to this pledge, from the Canadian Bankers Association and others, stated that singling out a specific economic sector for special taxation is a proven detriment to economic growth and there could be the unintended consequences of the big banks just passing along these higher costs to the consumers through higher fees.

This announcement from Trudeau comes while Canadian banks are posting exceptional earning results. On Tuesday, both the Bank of Montreal ($3.44 vs street $2.94) and Bank of Nova Scotia ($2.01 vs street $1.90) posted stronger than expected results. Bank of Montreal reduced its loan loss provisions by $70M, while Bank of Nova Scotia continued to reduce the pace of loan loss provision increases. Both banks indicated strength from core North American banking operations, but capital markets results were mixed with Bank of Montreal reporting a profit but Bank of Nova Scotia reporting a loss from their respective divisions. On Wednesday, Royal Bank ($3.00 vs street $2.71) and National Bank ($2.36 vs. street $2.13) both comfortably beat analysts' expectations as well driven primarily by the release of provisions set aside to cover bad loans. Strong investment banking performance also compensated for weaker trading divisions. Royal Bank posted a 34% jump in net income compared to a year ago.

Looking at the TTFS.I chart, it doesn't look to be impacted by this news quite yet as the strong earnings of the major banks continue to lead this index higher to new all-time highs as it approaches resistance around the 400 level. Further resistance can be found above at 432. To the downside, support can be found at 354.68 and at 327.67. With a SMAX score of 8 out of 10, the TTFS.I is showing near-term strength against the other asset classes.