After spending most of this year stuck in the red zone of the SIA S&P 100 Index Report, Salesforce.com (CRM) started to rise back up the rankings in the last couple of months and has finally returned to the Green Favored Zone for the first time since November of 2020. Yesterday, the shares finished in 25th place, up 1 spot on the day and up 22 positions in the last month. Since we last mentioned Salesforce.com in the June 23rd issue of the Daily Stock Report, the shares are up nearly $100.00 per share, or 51.3%.

For the first time in over a year, Salesforce.com (CRM) has broken out to a new all-time high, ending a long-term period of consolidation and signaling the start of a new advance. Following the September 2020 peak, the shares fell under distribution for six months until the bears were contained by support near the $200.00 round number, a previous resistance level.

The shares came under renewed accumulation since June and since then, the shares have established an upward trend of higher lows, snapped out of a downtrend, and completed two bullish Ascending Triangle breakouts.

From here, next potential upside resistance appears near $300.00, where a measured move and a round number converge, followed by a measured $360.00. Initial support appears near $260.00 near uptrend support and the 50-day moving average. 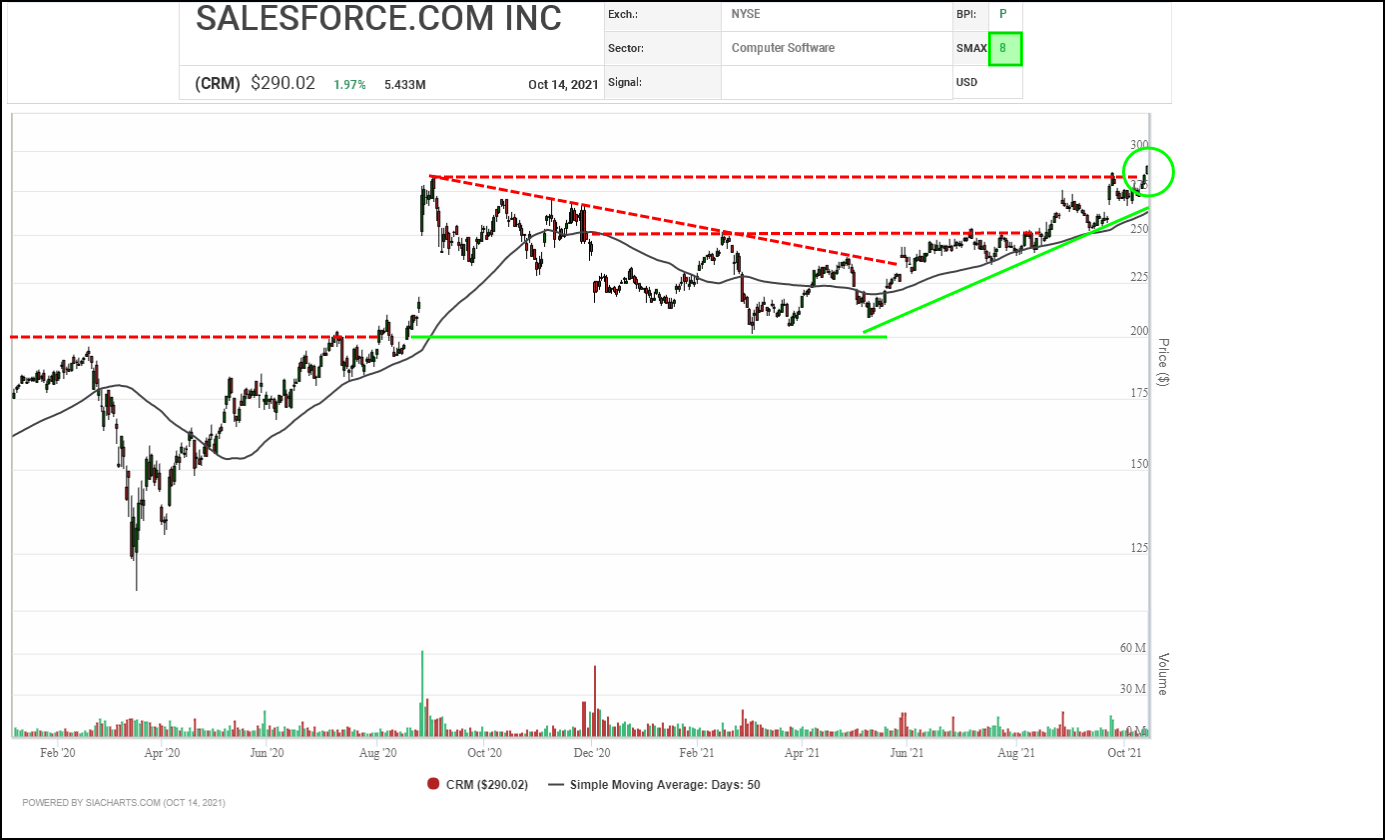 A major breakout is underway in Salesforce.com (CRM) shares. For the better part of a year, the shares drifted downward, giving back much of a previous high pole advance. The selloff was contained above $200.00 and a previous breakout point in March, and then in the summer, the shares started to resume their longer-term uptrend.

Over the last few months, the shares have generated a number of positive technical signals including snapping a downtrend line and then completing a series of bullish Double Top, Spread Double Top and Spread Triple Top breakouts. This week, the shares have broken through their September 2020 peak to new all-time highs, confirming that a new advance is underway.

Initial upside resistance may appear near the $300.00 round number, then the $355.90 to $377.65 zone where several vertical and horizontal counts converge. Initial support appears near $264.45 based on a 3-box reversal and a retest of a recent breakout point.

With a bullish SMAX score of 8, CRM is exhibiting strength against the asset classes.