Equities are coming off of a better week which saw major indices in the US and Canada bounce back. The first round of earnings reports, which were mainly from senior US Financials, have come in better than expected. Although managements have noted a number of worrisome issues including supply chain disruptions and inflation pressures starting to bite in raw materials, wages, and fuel costs, investors have shrugged those off so far suggesting recent weakness may have already priced in concerns enough that some are now looking to step in on the dip.

In particular, the S&P 500 and the Russell 2000 have turned upward within their current sideways trading ranges with initial resistance in place at previous highs near 4,570 and 2,355 respectively. Picking up from our Dow Theory comments in last week’s ELW, the Dow Transports have turned back upward, completing a bullish Double Top breakout and closing yesterday at 1,546. While this appears encouraging, the Transports remain within their wider range and need to break through 1,606 in order to confirm recent new highs made by the Dow Industrials.

We are now moving into the heart of earnings season which runs for the next two weeks or so. The coming week in particular brings a lot of results from large companies across a wide variety of sectors including Big Tech, Big Oil, Big Pharma, Big Mining, and Big Telcos, along with restaurants, autos, airlines, the rest of the railroads, the credit card giants, and other groups. 16 of the 30 Dow Industrials stocks are set to report between now and the end of next week, in addition to the 5 Dow stocks which have already reported results. In Canada, the focus for most of next week is on the materials sector (forest products, gold miners, chemicals, base metal miners), with oil stocks starting to report later next week.

Recent economic reports have continued to be dominated by signs of increasing inflation pressures. Next week we may get a better idea of how much pressure this is putting on central banks to take action and reduce stimulus with the Bank of Canada, Bank of Japan and European Central Bank all holding meetings. In Canada, the question with whether the central bank is ready to resume tapering asset purchases with the federal election campaign now done and if it is thinking about accelerating its rate hike timetable again. In Europe, investors may look for hints or news related to whether tapering is going to start by the end of this year or not. Tomorrow’s flash PMI reports, the first peek at economic conditions in October, may also shed additional light on what is happening in different places.

In this issue of Equity Leaders Weekly, we take a look at the forces driving recent gains in the S&P/TSX Composite Index and the price of Platinum, along with the implications of these moves. 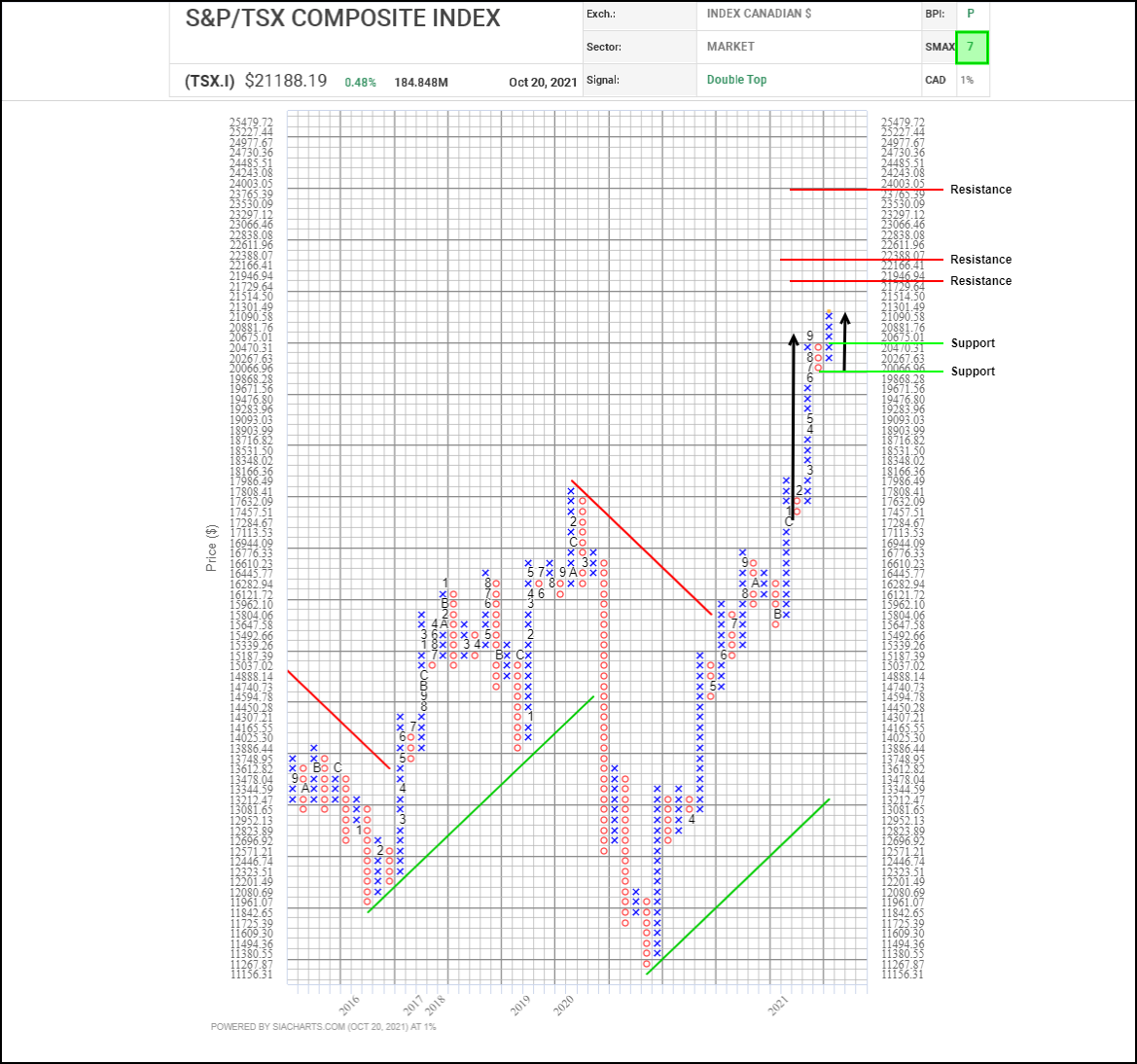 Boosted by its higher sensitivity to the Energy, Financials, and Materials sectors relative to its US peers (but similar to Australia), the S&P/TSX Composite Index (TSX.I) has been steadily advancing for nearly a year. Its last sizeable correction bottomed out in November of 2020 near 15,500 and since then, it has soared up above 21,100 with only two minor 3-box reversals on a 1% chart that would not even show up on a 2% chart.

The most recent correction was contained above the 20,000 round number and in recent weeks, TSX.I has resumed its primary uptrend, breaking out to more new all-time highs as soaring oil and gas prices attract capital to energy stocks, rallies in copper and uranium attract interest to base metal miners, and Canadian financials trend upward alongside their US counterparts.

Based on horizontal counts, next potential upside resistance for TSX.I appears near 21,945 and then 22,390. Initial support appears near 20,470 based on a 3-box reversal. 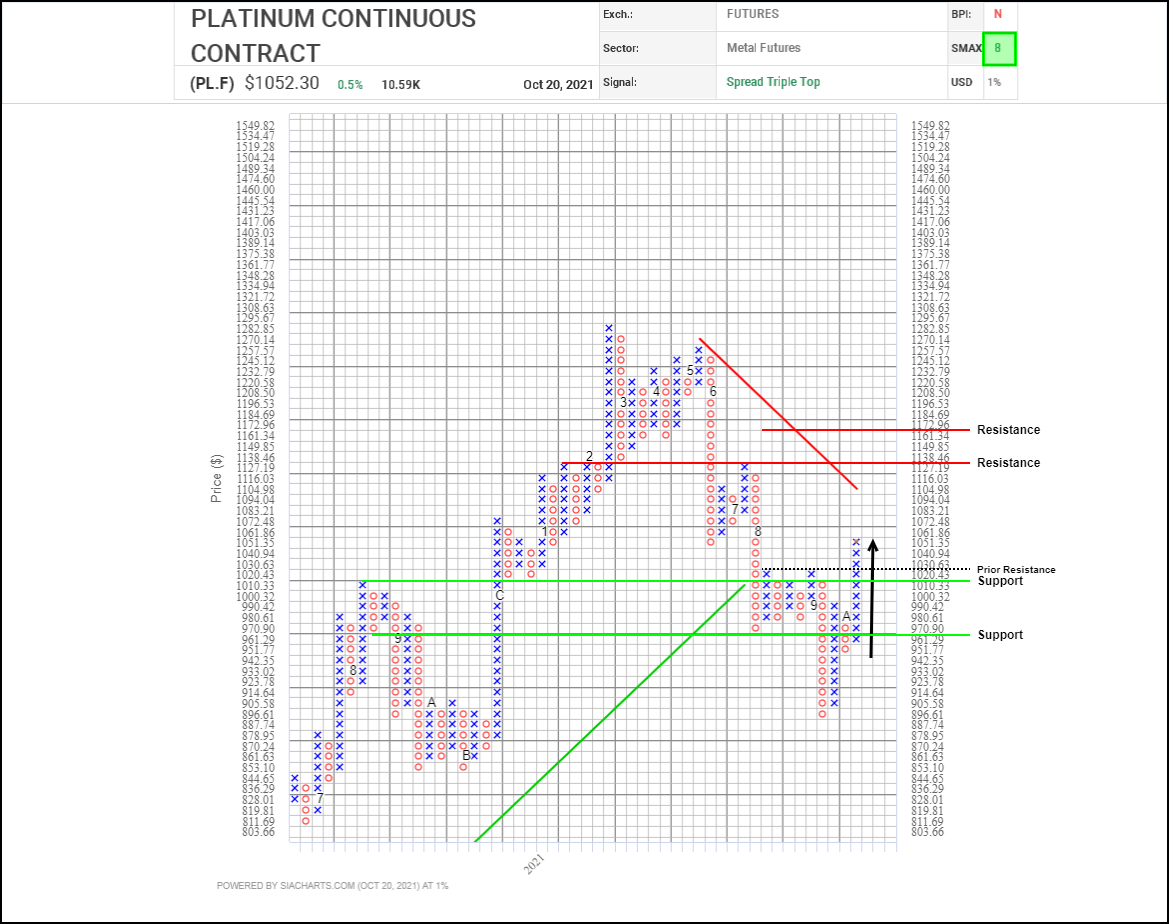 Platinum trended downward through the summer as it felt double the pressure from a combination of a lack of interest in precious metals as alternative currency demand shifted over to cryptos like Bitcoin, and a slowdown in demand from the auto sector as a chip shortage curtailed production. Platinum bottomed out through August and September and this month, it has decisively turned upward.

Building on an initial bullish Double Top breakout, Platinum has regained $1,000/oz and continued to climb, recently staging a bullish Spread Triple Top breakout which completed a base and has signaled the start of a new recovery trend.

With gold continuing to struggle, while industrial metals like copper, lithium, and uranium have been recovering, it would appear that the current rebound in platinum is being driven by the industrial side and may be an indication that investors are expecting the chip logjam to break and auto production to return to normal in the future. Senior US automakers are scheduled to report results in the coming week, which could influence trading in platinum in the coming days. Initial upside resistance appears at a downtrend line near $1,105, followed by previous column highs near $1,140 and then $1,175 based on a horizontal count. Initial support appears near $1,010 based on a 3-box reversal, just above the $1,000 round number.