The tone of equity market trading over the last week or so has shifted from enthusiasm to caution. Part of this may be due to the usual US Thanksgiving week slowdown in trading activity but other factors appear to be at work as well.

Retailers have particularly been impacted by this shift in sentiment as several middle tier companies sold off dramatically (one day losses of 15%-25%) after reporting earnings amid complaints of rising transport costs, rising wage costs, and supply chain problems impacting their ability to bring in inventory. We are now in the busiest shopping week of the year in the US (Black Friday/Cyber Monday) where reports on traffic could keep the sector front and centre. At the same time that the risk of economic disruption from transportation issues and a new apparently seasonal wave of COVID arriving has increased, impacting overseas markets in particular, the end of the easy money party also continues to loom. This week, the Reserve Bank of New Zealand raised its benchmark rate for the second meeting in a row, leading the hawkish charge. Meanwhile in the US, Fed Chair Powell was reappointed for another term, indicating a preference to stay the course and continue normalizing monetary policy. Yesterday’s Fed minutes indicated that several members recognized that inflation may force them to move up their timetable for US interest rate increases.

On the other hand, the energy sector has started to show renewed strength encouraged by a bounce back by crude oil and natural gas prices. Crude oil appears to be in a “sell on rumor, buy on news” situation. Oil has retreated on the threat that the US and other countries including China, Japan, India and the UK could flood the market with supply by opening up their strategic reserves. It turns out that the release of 50 mmbbl amounts to approximately ½ of 1 day’s world oil consumption, or 2.5 days of US oil consumption and appears to be significantly less than some investors had feared.

Although today and tomorrow are usually quiet around the US holiday break, next week markets get right back to business. The turn of the month brings the usual economic announcements including PMI and US employment reports.

In this issue of Equity Leaders Weekly, we preview Canadian bank earnings week and what the price of platinum may be telling us about the future of the auto sector. 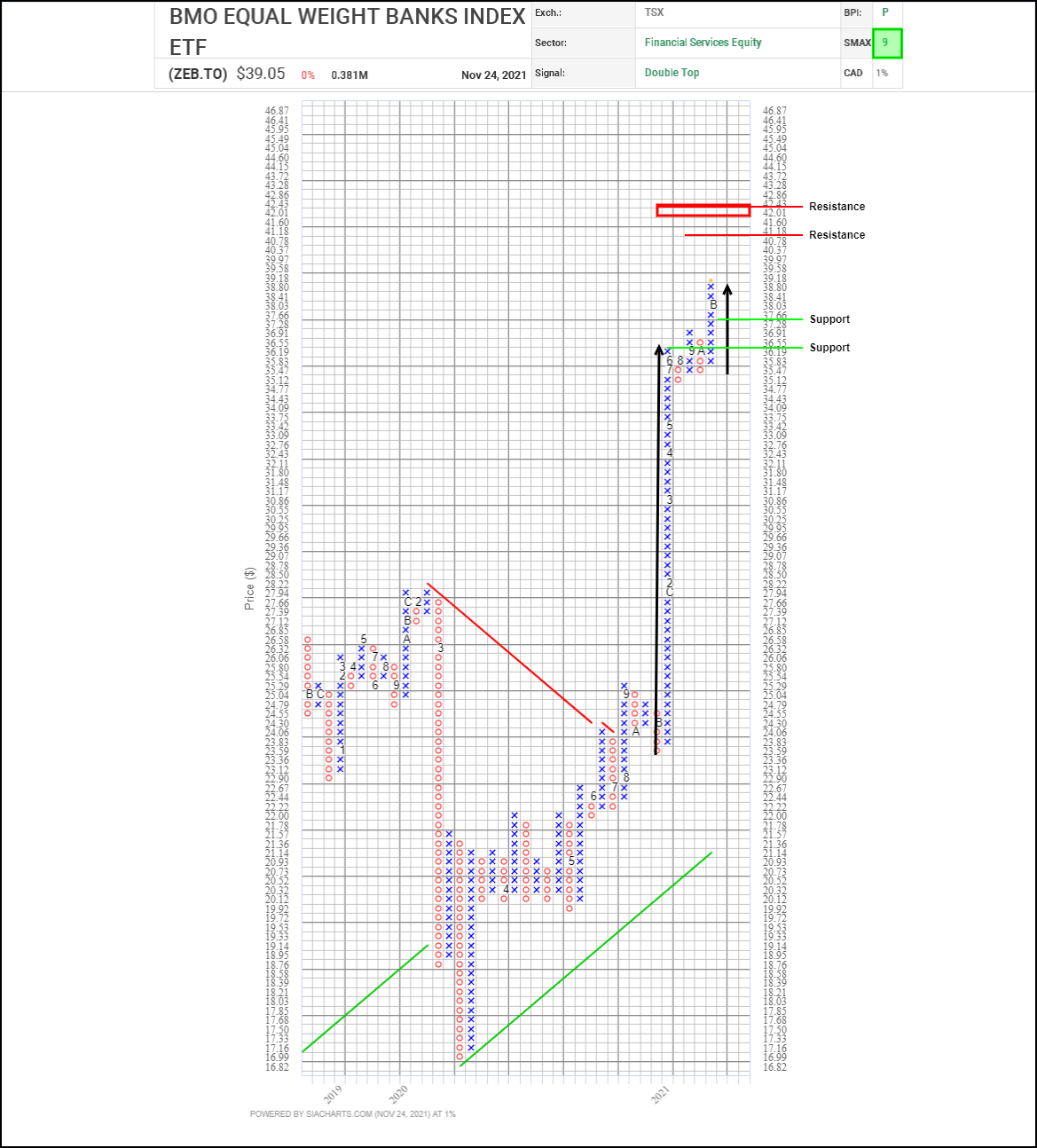 Next week is Canadian bank earnings week, with the Big Six scheduled to report results between Wednesday and Friday. The July to October time frame covered by these reports was generally positive for the North American economy and with US banks having reported positive results last month, investors are likely expecting positive earnings and perhaps more reductions in loan loss provisions from the banks.Investors main focus this time around though, is likely to be on potential returns of capital. It’s the end of the fiscal year for banks, a time when dividends and share buybacks are commonly reviewed anyway. Providing an additional impetus for change, earlier this month, Canadian financial regulators gave the green light for big institutions to resume dividend increases and resume share buybacks. The Big 3 Insurance companies, who had already reported results when the government announcement was made, immediately announced dividend increases of 16% on average and launched new share buyback programs.

The BMO Equal Weight Bank ETF (ZEB.TO) spent the first half of this year under steady accumulation, building a large High Pole, and then spent the latter part of the summer consolidating its gains. In October, the ETF broke out to a new high, completing two bullish Double Top patterns and launching into a new upleg. This advance started with a positive response to US bank results and has continued on anticipation of Canadian bank results and potential dividend increases. 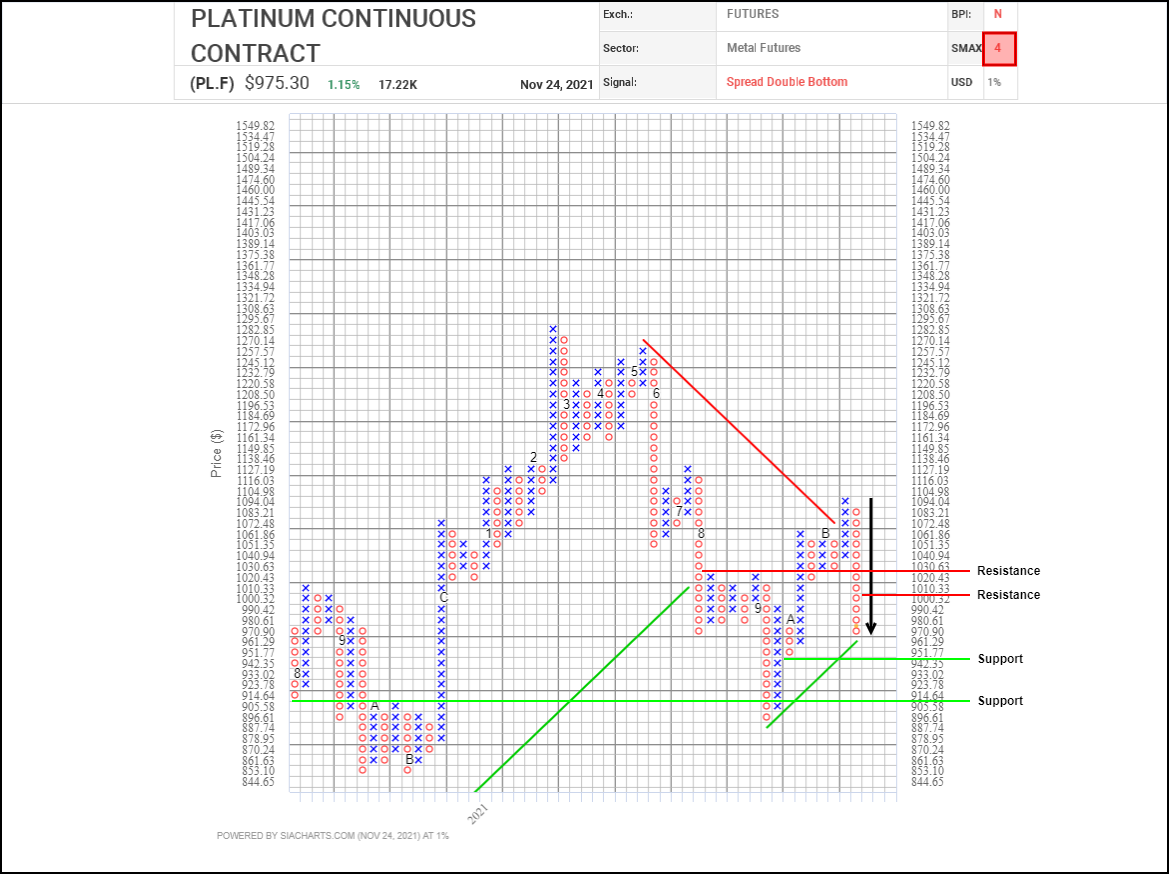 Two weeks ago, we noted that platinum was breaking out to the upside, along with gold and silver as rising inflation sparked renewed interest in precious metals. Since then, gold and silver have staged moderate corrections while the selloff in platinum has been much deeper and more technically devastating.

Trading action in Platinum, battery related metals like lithium and auto stocks suggests that the way investors look at the auto sector may be starting to change significantly. The main application for platinum in cars is in catalytic converters, in other words, in managing the environmental impact of burning fossil fuels.

Although electric vehicle makers like Tesla Motors have received a lot of media attention and lavish market valuations, to date they have remained niche players in the auto sector. Over the course of this year, though, a number of additional electric vehicle makers have gone public and traditional automakers have been announcing new car and truck models. This all suggests that electric vehicles may be moving into the mainstream which could potentially decrease industrial demand for platinum in the future.

Earlier this month, Platinum (PL.F) looked strong completing a bullish Triple Top breakout and snapping a downtrend line. The party turned out to be short-lived as bears quickly regained the upper hand and drive the price back down under $1,000/oz completing a bearish Double Bottom and a bearish Spread Double Bottom on the way down to a retest of uptrend support near $960. Next potential support after that appears near $942 and $905 based on previous column lows. Initial rebound resistance appears between the $1,000 round number and $1,010 based on a 3-box reversal.