Tesla Motors (TSLA) shares soared back up the rankings in the SIA S&P 100 Index Report yesterday, jumping 44 positions to 4th place. The shares had weakened in December as founder Elon Musk sold some of his shares in a planned program, but roared back to life yesterday, popping 13.5% after the electric vehicle producer announced strong Q4 sales numbers.

It has been a roller coaster ride for Tesla Motors (TSLA) shares over the last six months, but through these ups and downs, some very strong technical levels and patterns have emerged. Back in September, the shares completed a bullish Ascending Triangle pattern with a breakout over $75, then confirmed the start of an upleg with a breakaway gap breakout over $900 in late October. Following a high volume advance up toward $1,250, the shares dropped back as volumes dried up. In December, TSLA successfully retested its previous $900 breakout point as new support and since then, have been bouncing back.

First, the shares regained $1,000 and then regained their 50-day average which has reversed polarity to become support near $1,050. Yesterday, the shares snapped a downtrend line with a breakaway gap up through $1,125 (which reverses polarity to become initial support), on a jump in volume that signals renewed investor interest.

Initial upside resistance appears at the November peak near $1,250, where a breakout would confirm the start of a new upleg. Should that occur, measured moves from previous trading ranges suggest potential resistance near $1,300, $1,450 and $1,600. 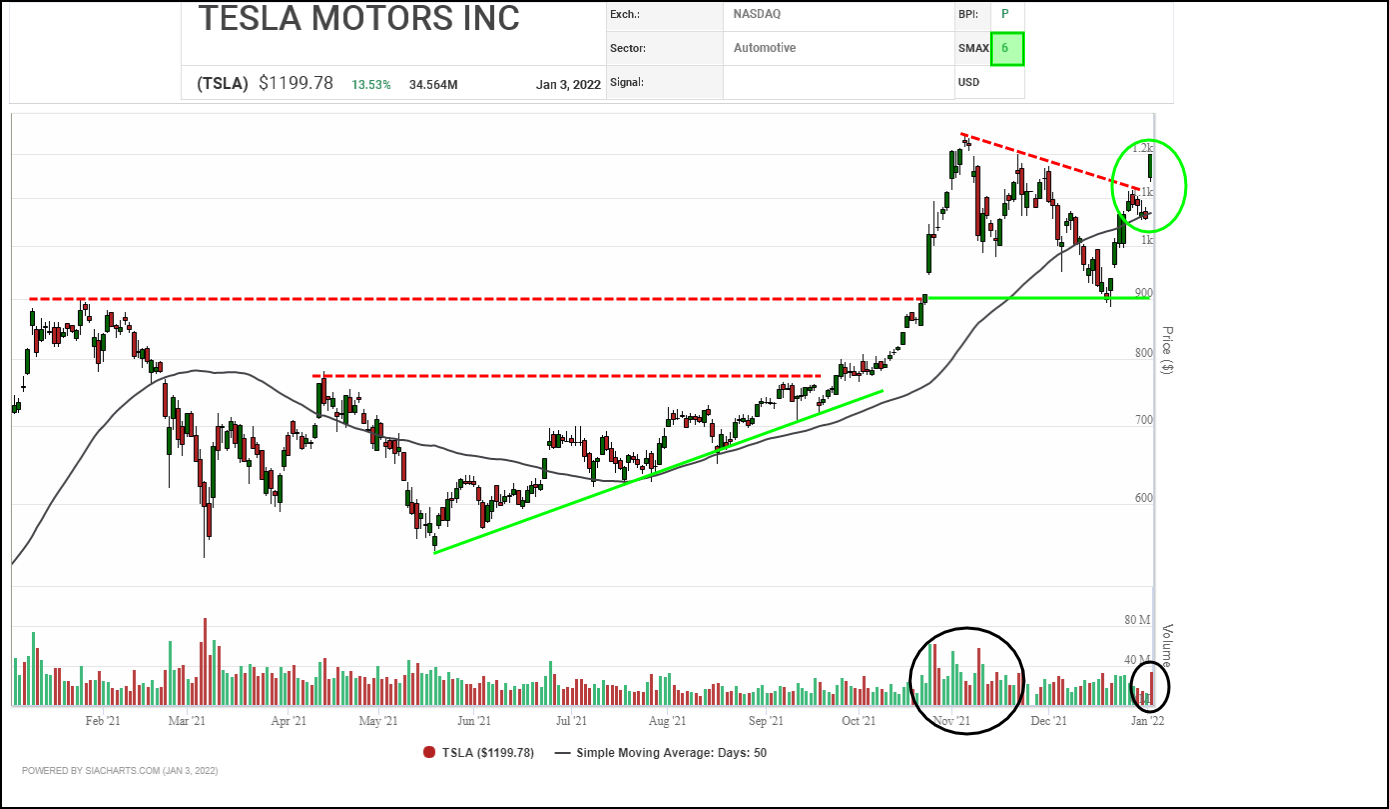 Back in October, Tesla Motors (TSLA) shares, which had started to accelerate upward in August, broke through their February peak near 888 to a new all-time high and then soared up toward $1,250 before staging a significant correction in December. The retreat, however, was contained above 900 and its previous breakout point, which indicated that the underlying long-term uptrend remained intact Yesterday, the shares roared back upward, completing a bullish Double Top breakout, which called off the previous bearish double bottom pattern.

Currently, the shares are approaching their November high near $1,244. A breakout over that level would complete a bullish spread double top pattern and confirm the start of a new advance. Should that occur, horizontal counts suggest next potential resistance may appear near $1,295, then $1,545 on trend. Initial support appears near $1,104 based on a 3-box reversal.

With a bullish SMAX score of 6, TSLA is exhibiting strength against the asset classes.