Coming out of Martin Luther King Day and moving through Inauguration Day, US markets have resumed their upward course. Initial earnings reports have generally been meeting and beating expectations and yesterday’s rally in Netflix shows that investors are still prepared to respond to positive news.

With the change in power in the US completed and the Democrats pushing ahead with their agenda, investors may be anticipating an easier path to more fiscal stimulus in the coming months. This week, we are also scheduled to hear from the Fed on Wednesday who may hint on their monetary support plans for the coming year. The first half of the week is very light for economic news, but the back half brings US GDP on Thursday and Canada GDP plus Chicago PMI on Friday as the end of January approaches.

The Bank of Canada this week raised concern that increased lockdowns could make economic conditions worse in Q1 than previously thought but it was also optimistic that easing restrictions and vaccine rollouts could help the economy to recover more quickly later in the year. The Bank of Canada maintained current levels of emergency support (low rates plus asset purchases) and suggested that the conditions for an increase (inflation returning toward 2%) have been pushed out to 2023. We could see similar commentary from the Fed next week.

The coming week sees earnings season start in Canada with the two big railroads set to report, and accelerate plus broaden out in the US to include senior companies from several sectors including: credit cards, aerospace, consumer products, Big Oil, Big Tech, restaurants, industrials and others. Headliners include: General Electric, Microsoft and CN Rail on Tuesday, CP Rail, Apple, Boeing, Facebook and Tesla on Wednesday, Rogers, Visa, Mastercard and McDonalds on Thursday, wrapping up with Caterpillar and Chevron on Friday the 29th.

In this week’s issue of Equity Leaders Weekly, we look at how the change in power in the US has influenced sentiment toward marijuana stocks and Mexican stocks. 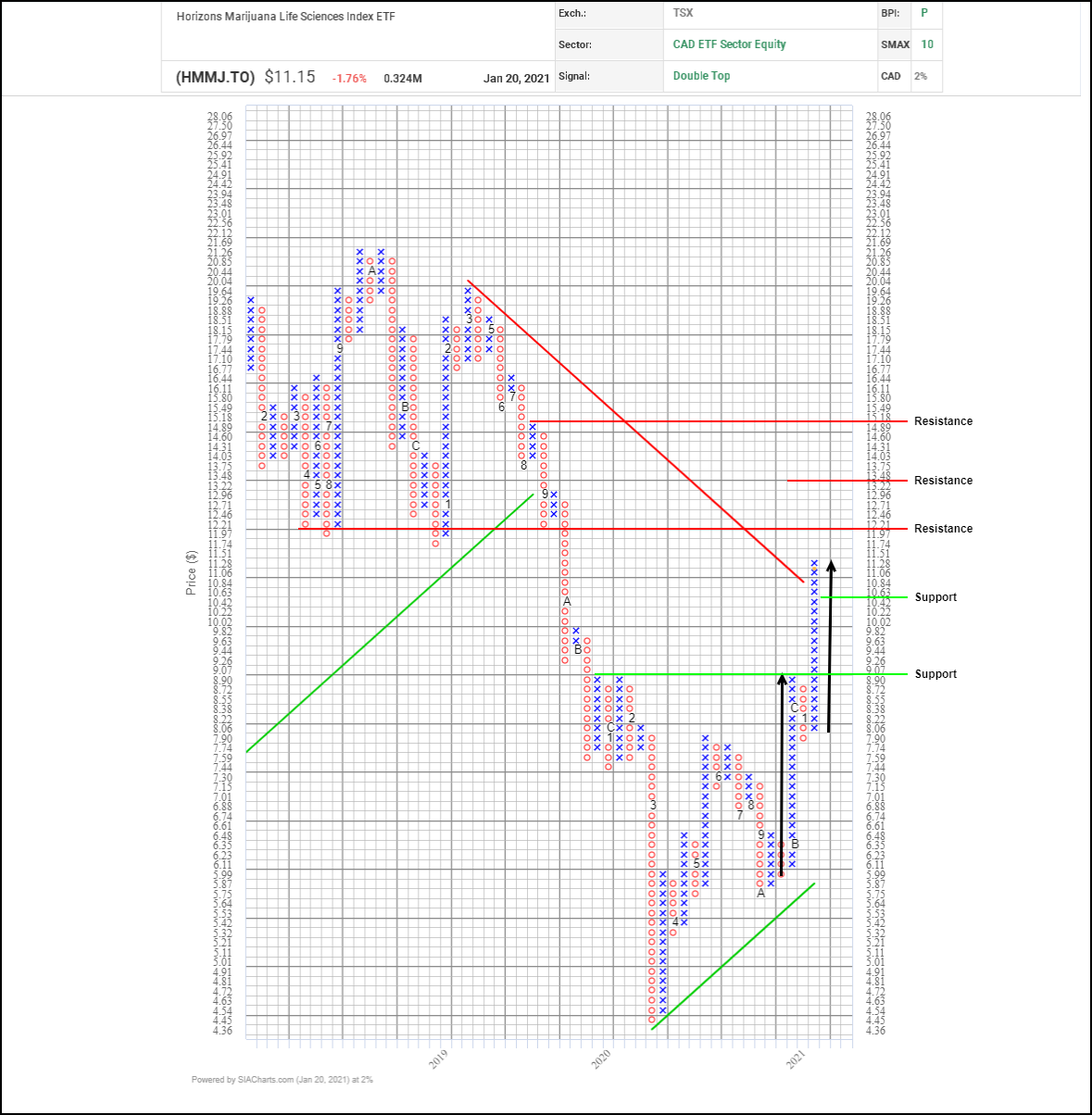 After getting crushed in 2019 and early 2020, Canadian pot stocks regained their footing through the middle of 2020. Since October, the marijuana sector has roared back to life, staging two significant surges, one around the US election that completed a bullish Spread Double Top pattern, and one this month around the change in power in the US Senate and the inauguration that has regained $10.00 and snapped a long-term downtrend line.

It appears that investors have responded positively to Democratic victories, perhaps speculating that although the new administration appears rightly focused on fighting COVID to start, that the Democrats controlling the White House and both houses of Congress could lead to a friendlier stance toward marijuana laws at the federal level.

Next potential upside resistance for the Horizons Marijuana Life Sciences Index ETF (HMMJ.TO) appears at previous column lows near $12.20, then the $13.45 to $13.75 area plus $15.20 based on the convergence of vertical/horizontal counts and previous column highs/lows. 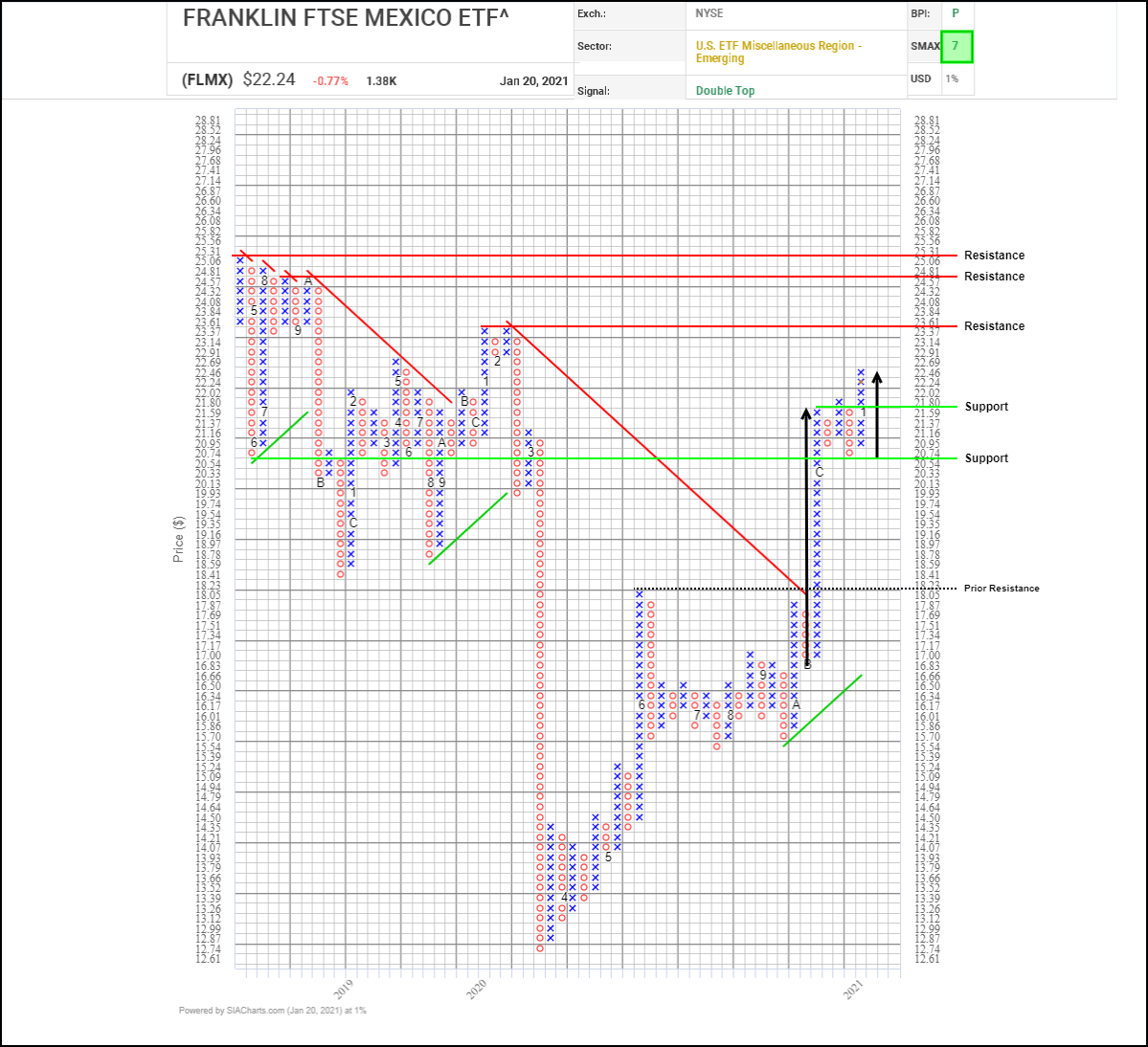 With the change in power in the US, investors have been speculating that incoming Biden Administration may start to rebuild some of the international relations which had become frayed during the Trump Administration. One of the new president’s first executive orders yesterday was cancelling construction on the Mexican Border Wall which had been a political flashpoint under President Trump.

The Franklin FTSE Mexico ETF (FLMX) soared back in October-November around the US election on a combination of speculation on thawing relations along the US southern border and improving energy prices (recall that Mexico is part of the wider OPEC+ group of energy producing countries). At that time, FLMX completed a bullish Spread Double Top pattern and snapped a downtrend line. Following a brief, common period of consolidation in an higher range, FLMX has broken out to the upside again this month, confirming that a new uptrend is underway.

Initial upside resistance for FLMX appears at the February 2020 high near $23.60, followed by the $24.80 to $25.30 range where previous column highs/lows and vertical/horizontal counts cluster around the $25.00 round number. Initial support appears near $21.60 based on a 3-box reversal.