It feels almost strange, in a week that has seen the S&P 500 achieve a new all-time high, to be talking about a growing sense that the market advance which started just after the US election may be near an end with the possibility of a near-term consolidation or correction phase potentially starting.

Three developments this week suggest that investor sentiment has started to change. First, several large cap companies have declined after posting better than expected earnings, which suggests that stocks may have already priced in good results and that some investors may increasingly be looking to take profits against news.

Second, there have been a series of explosive, apparently retail-driven rallies in small-cap laggards, over the last couple of weeks, headlined by Gamestop. This kind of action has historically been associated with the latter stages of bull markets. It appears that having exhausted opportunities what may now be fully valued large and mid cap stocks, fast speculative money has gone deeper down into less liquid small caps with surges in demand, swamping those markets (and apparently short sellers as well).

Finally, the Fed came out this week with a steady as she goes monetary policy decision and statement. While the central bank is maintaining its current support programs, it declined to add new easy money rocket fuel to the fire, which also has helped the US Dollar to stabilize a bit.

It’s the end of the month already, so the coming week brings the usual flurry of early month reports including Manufacturing and Service PMI, plus US and Canadian employment numbers. The heart of earnings season continues in North America with results continuing from Big Oil, Big Pharma, and Big Tech, plus Insurance, Restaurants, and other sectors. 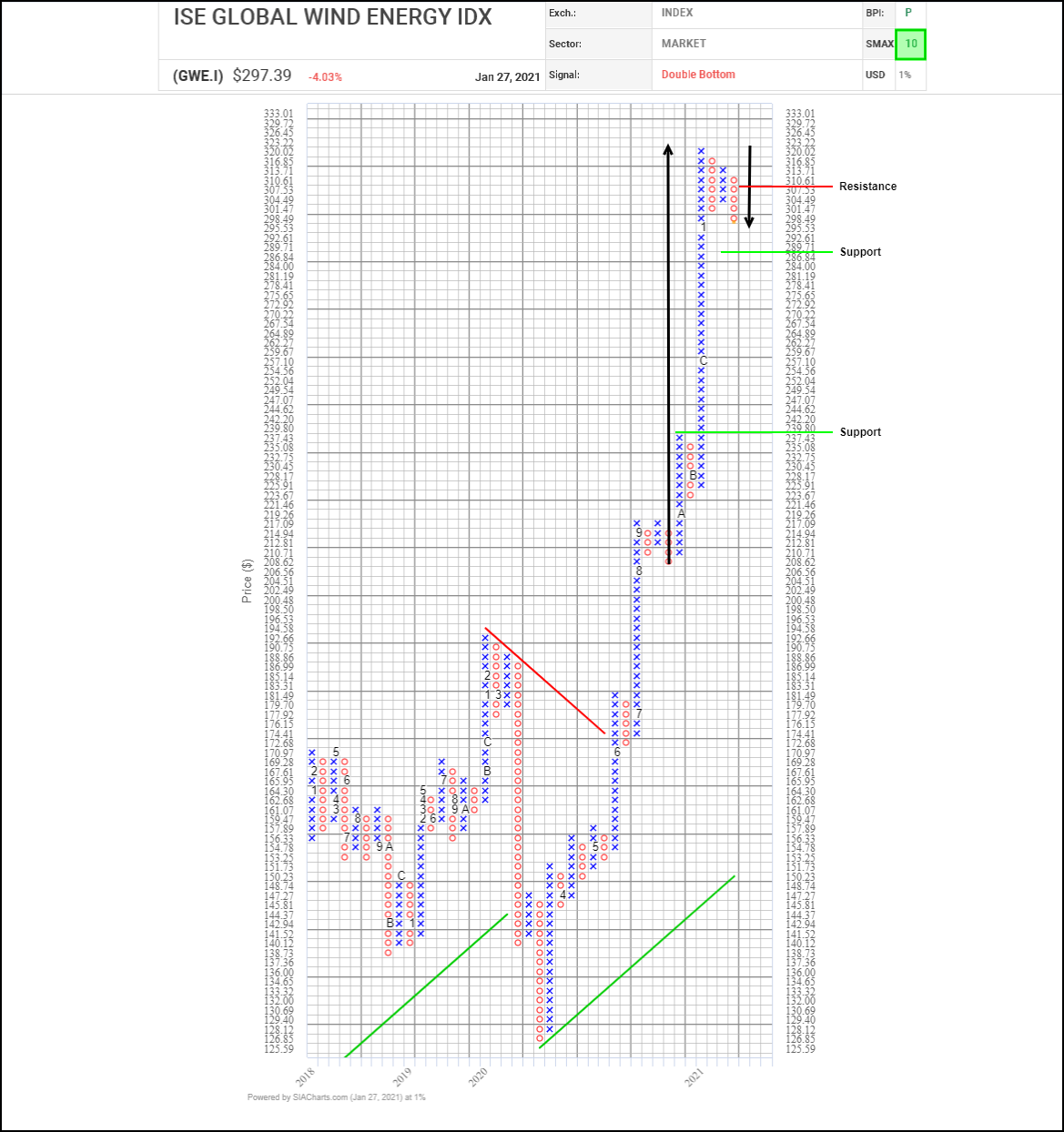 One case in point is the alternative energy sector. Anticipating that the Biden Administration may launch a new series of climate and green energy initiatives, the ISE Global Wind Energy Index (GWE.I) soared after the US election in November. This month, however, with the inauguration complete and the new administration plus congress getting back to work, the index has started to retreat with investors taking profits and waiting to see what form new programs may take and how much new money may actually get allocated.

This week, the sector index has turned downward, falling back under 300.00 (and completing a bearish Double Bottom pattern signalling that a correction has started in earnest. 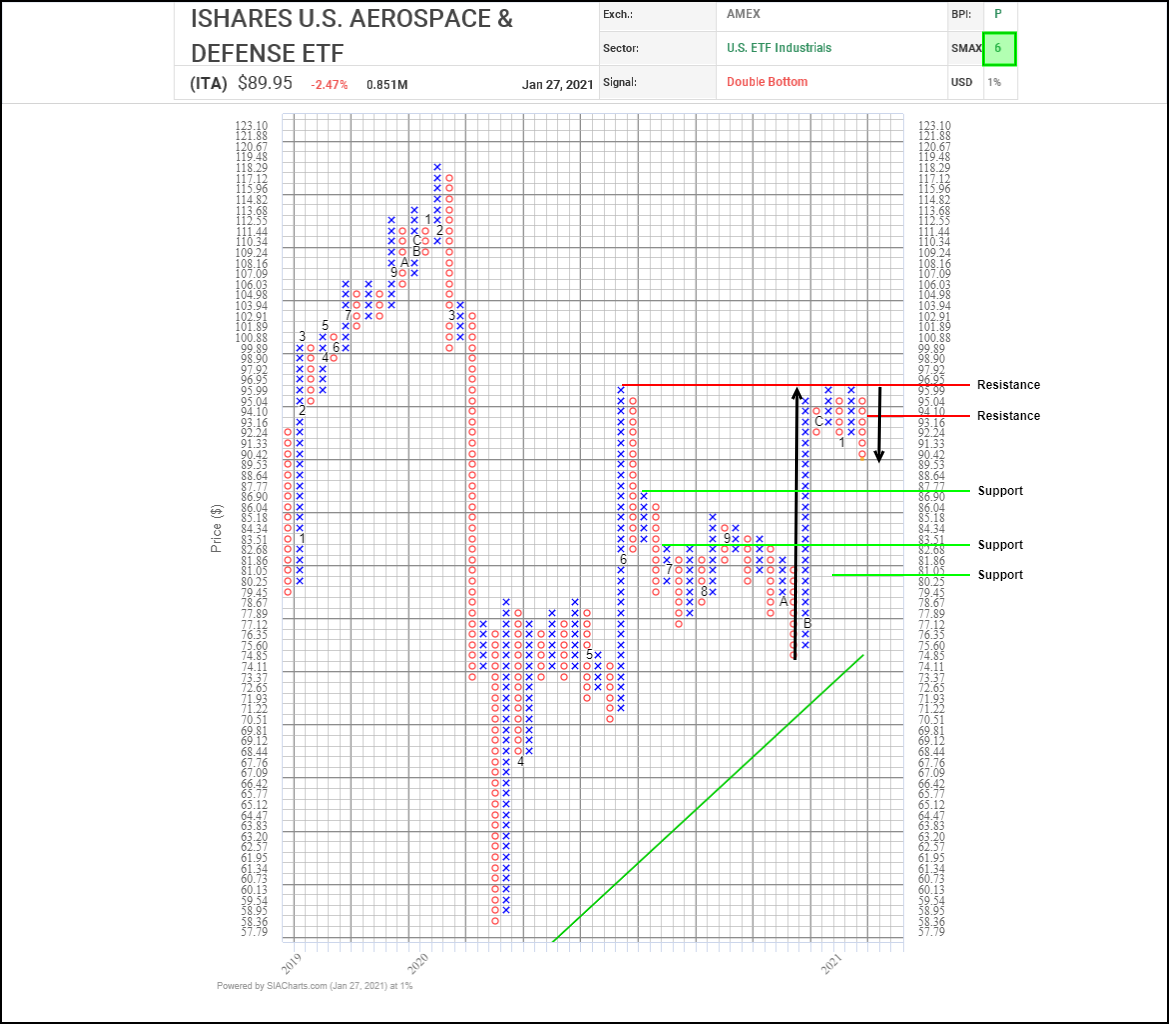 The Aerospace & Defense sector mainly consists of two groups; Boeing, and the defense contractors, both of which have seen investor support erode recently.

In the case of Boeing, the shares had rallied back in the fall which helped to boost the sector, on anticipation of the 737 Max 8 returning to service. Now that re-certification is complete, investors may be taking profit against the news, particularly as new lockdowns and restrictions on international travel have impacted Boeing’s airline customers. The potential that ongoing restrictions on travel could negatively impact the demand for new aircraft led the company to take significant writedowns in its latest quarter and may drag on the shares in the near term.

In the case of the defense contractors, shares have been coming down recently, as it remains unclear what direction defense spending may take in the coming years. At this early stage, the Biden Administration appears to be more focused on increasing direct support to individuals rather than creating big new spending programs for corporations, more interested in investing in medical equipment and vaccines than in military equipment, and more focused on fighting COVID than on fighting political adversaries.

The iShares US Aerospace & Defense ETF (ITA) took off back in October-November, but the rally was contained by previous resistance at the June high near 96.96. The ETF rice levelled off through December but has turned decisively downward this month, completing two bearish Double Bottom breakdowns.