Overall, stock market indices appear to be regaining their footing from a choppy few days. The last week has seen the tech-sensitive NASDAQ struggle relative to broader indices, while commodities and related stocks have continued to do well. In last week’s issue of the Equity Leaders Weekly, we discussed how the rapid rise in cryptocurrencies, led by Bitcoin taking a run at and then trading around $50,000, appears to have peeled away alternative currency demand away from gold. It also appears that at the margins, Bitcoin may also be pulling some of the fast, risk-seeking money away from momentum stocks.

The impact of rising commodity prices has also been reverberating through world markets. While increasing oil and metal prices have helped related equities, gains in grains, soft commodities and livestock prices have stoked expectations that inflation could start to rise in the coming months, pushing up traded interest rates, including the US treasury note yield, and keeping a lid on bond prices. Fed Chair Powell indicated this week that inflation remains soft, which suggested the Fed has no plan to scale back its stimulus programs and has helped to shore up stock prices.

It’s not only the last week of the month, it’s the last big week of earnings season. Positive reports from senior US retailers, particularly in the home improvement sector, and from Canadian Banks, who have significantly cut their loan loss provisions, have helped to boost investor confidence.

The coming week brings the turn of the month, and with it, a flurry of economic reports including Manufacturing and Service PMI surveys, plus employment, trade, retail sales and construction numbers. Earnings season is pretty much over with the calendar for the coming week dominated by smaller retailers and small cap stocks.

In this week’s issue of Equity Leaders Weekly, we look at the causes and implications of the recent rise in the US 10-year treasury note yield, and at action in the price of sugar as an example of renewed interest in commodities. 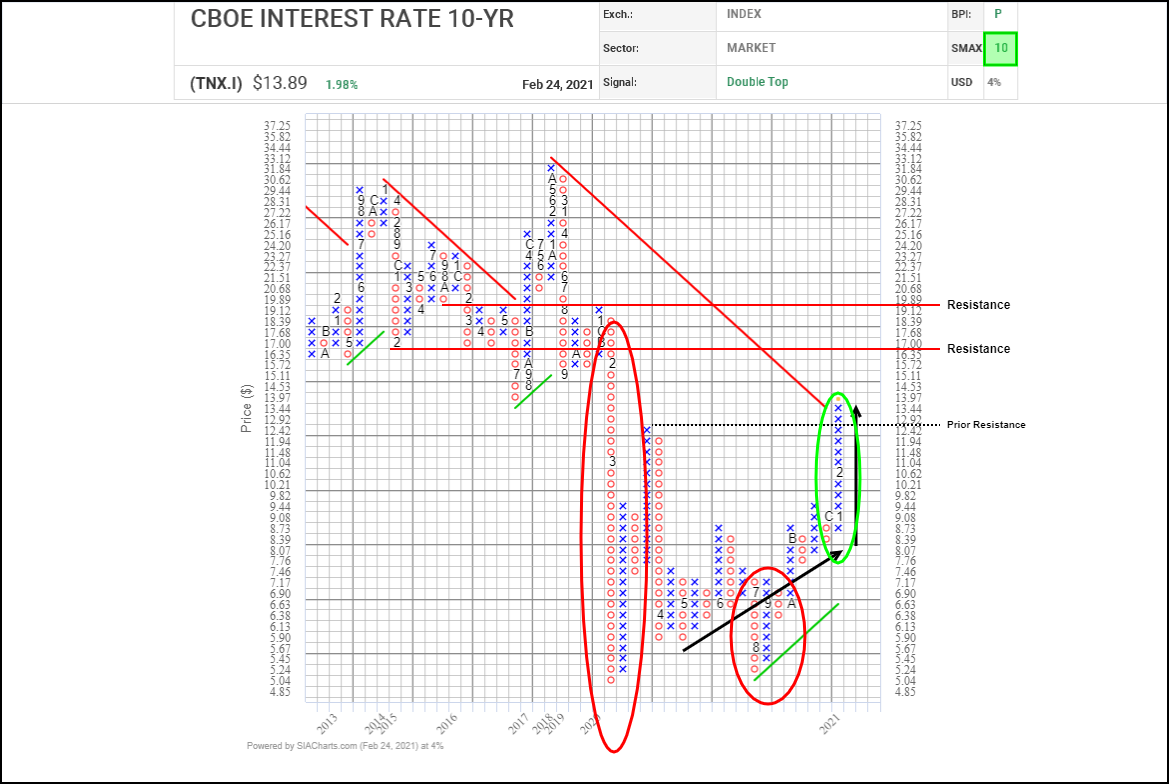 Last year, for example, TNX.I crashed back in February-March as the first wave of Covid shut down the world economy, put tremendous pressure on financial markets, crashed commodity prices and unleashed a massive wave of fiscal and monetary stimulus from governments and central banks around the world. Speculation of a new wave of US stimulus sparked a smaller decline that ended in a successful retest of support near 0.50%.

Since last summer, TNX.I has been steadily climbing. It completed a bullish Spread Triple Top pattern with a breakout over 0.90% in November, and it has really started to climb since the start of this year clearing 1.00%, and recently snapping a downtrend line with a breakout over 1.30%.

This recovery appears to have been driven by a number of factors including: last year’s economic and market panic fading and confidence improving as vaccines arrive and Covid case counts fall, rising commodity prices increasing inflation expectations and growing speculation that even though more fiscal stimulus may be on the way, central banks like the Fed are less likely to add new additional stimulus beyond current programs.

The next potential upside resistance tests for TNX.I appear near 1.70% and 2.00% where measured moves, round numbers and previous column highs/lows cluster. A move toward 2.00% sometime down the road could spark speculation about when central banks may start to slow asset purchases. 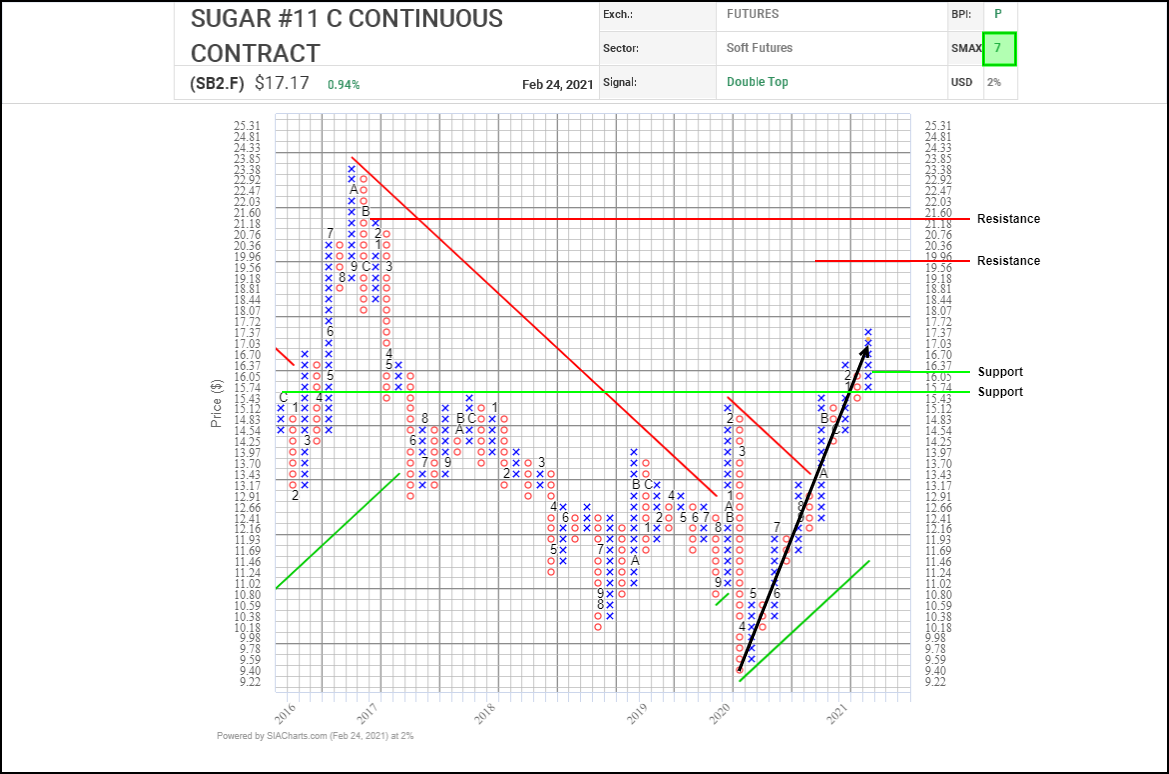 In January, sugar cleared 15,75, which had been a long-term resistance level dating back to 2017, confirming the start of a new uptrend and currently are building on another Bullish Double Top breakout over 16.70.

Next potential upside resistance appears near 20.00 where a round number and a vertical count converge, then the 21.20 to 22.05 zone where previous column X highs and vertical/horizontal counts converge. Initial support appears near 16.05 based on a 3-box reversal and a retest of the latest breakout point.