Some of the fear that gripped certain equity market sectors appears to have eased over the last few days. Although the rise in traded interest rates which rattled some traders earlier this month has continued, statements from central bankers in recent days have indicated that they expect inflation to remain contained, and their current stimulus programs to continue at current levels in North America and to increase in Europe.

Within equity markets, rotation continues with investors taking profits from sectors which had benefitted from the stay-at-home economy and redeploying the proceeds into sectors with the potential to catch up as economies reopen.

Yesterday’s Fed decision and projections can be seen as indicating a goldilocks economy ahead, strong enough to support corporate earnings growth but not strong enough to force the Fed to tighten any time soon. For example, Fed members average GDP forecast for 2021 increased to 6.5% from 4.2%, but the 2022 forecast only increased to 3.3% from 3.2%. Similarly, FOMC members now expect 2.4% inflation for this year, as commodity prices rebound, but for inflation to ease back to 2.0% next year. For interest rates, all 18 members expect no increases in 2021, 14 members expect no increase in 2022 and 11 members expect no increases in 2023.Central bank meetings continue to dominate the economic calendar, headlined by the Bank of England today, the Bank of Japan overnight tonight, and the Peoples Bank of China at the start of next week. Flash PMI numbers are due in the middle of next week. The earnings calendar is also really light following today’s reports from FedEx and Nike.

In this issue of Equity Leaders Weekly, we take a look at what the Sector Scopes feature in SIA Charts is telling us about investor confidence and capital rotation between equity market sectors, and at a recent breakout by the homebuilding sector. 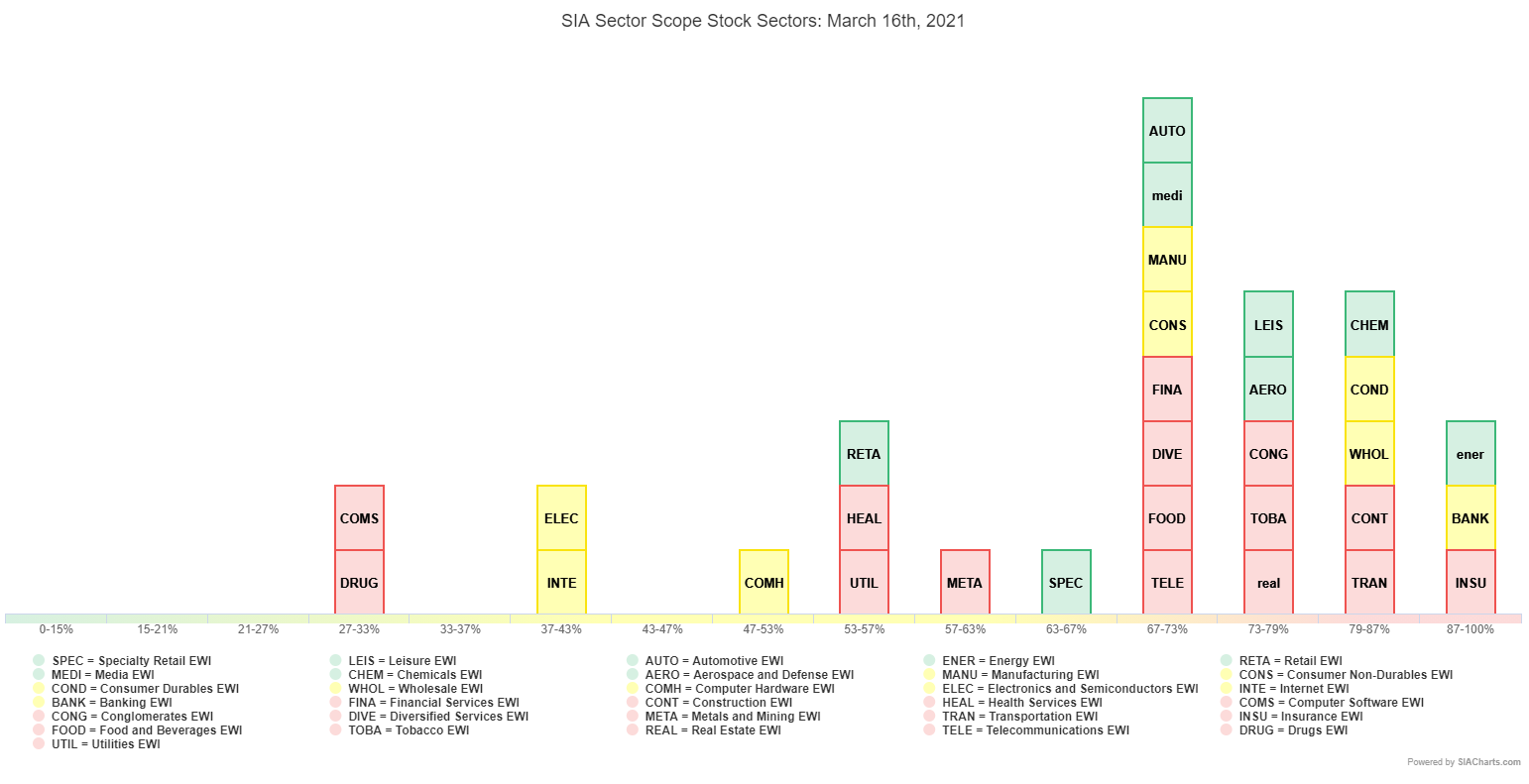 The Sector Scopes feature in SIA Charts, which can be found in the Markets – BPI tab, provides a visual analysis of the bullish percent (percent of stocks within a group on bullish charting signals) for 31 industry groups. In addition to providing a snapshot of which groups are attracting more or less capital at a point in time, they also can provide insight into changing capital flows over time. The bullish percent increases from left to right.

A month ago, the majority of sectors were piled up on the right-hand side of the chart, indicating a bullish market but also one that was becoming overbought with several sectors potentially due for a correction. Some corrections do appear to have occurred over the last month as a more recent sector scopes chart is indicative of a more neutral to bullish market, with the majority of the sectors in the center-right part of the chart with overbought conditions easing as there are fewer sectors in the two rightmost columns.

The BPI charts also indicates that there has been significant rotation between sectors over the last month. Sectors which have underperformed and shifted dramatically leftward in the chart include Internet, Electronics & Semiconductors, and Computer Software. Rightward moving, outperforming sectors over the last month include Energy, Chemicals, Consumer Durables, and Insurance. 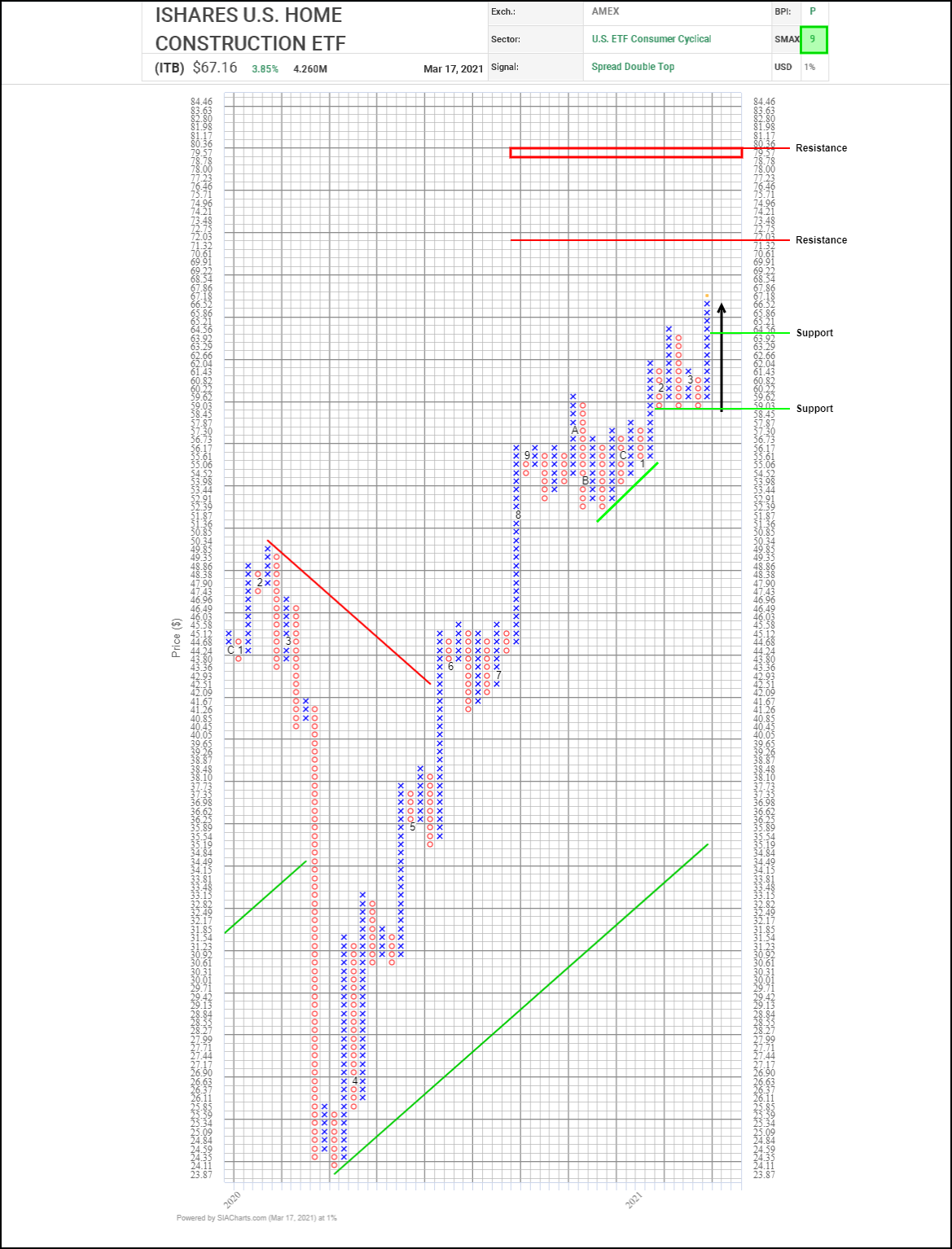 Homebuilding is a sector generally recognized as being particularly sensitive to economic conditions and as a reflection of the health of the consumer economy. Since bottoming out in March, homebuilders have staged a strong recovery with the iShares US Home Construction ETF (ITB) soaring approximately 175% up off its low from a year ago. Accumulation has continued in recent months, as shown by the series of higher column lows between November and January, then steady support above $59.00 through February and into early March.

In recent days, ITB has started to advance once again, completing bullish Double Top and Spread Double Top breakouts, signaling the start of a new upleg. Next potential upside resistance on trend appears near $72.03 based on a vertical count, then the $79.55 to $80.36 area around the $80.00 round number where multiple horizontal counts cluster. Initial support appears near $63.90 based on a 3-box reversal.