Its a relatively quiet week for equity markets in what could be the calm before the storm as investors mark time waiting for the start of earnings season which kicks off next Wednesday-Thursday with results from several big banks and brokerages in the US, plus some of Canada’s media companies.In what looks so far like a case of “no news is good news”, confession season has been extremely quiet suggesting that managements appear confident that they can meet or exceed their guidance and/or street expectations for Q1 results. Economic news remains positive with the US posting spectacular job growth last Friday and European Service PMI reports showing improvement. This Friday brings Canada’s monthly employment report (street 100K vs previous 259K), which could cut through some of the recent noise around the impact of lockdowns on the economy. Yesterday’s Canadian Ivey PMI report for February was particularly strong (72.9 wow vs street 60.5). Overseas, the coming week brings a number of economic reports from the UK which may give an indication of the impact of Brexit three months in, and the country’s lockdowns.

Commodity action remains muted with copper hanging around $4.00/lb and WTI crude oil settling out near $60.00/bbl. Crude oil has seen mixed developments this week with demand improving enough for OPEC+ to allow production to start increasing again between May and July creating a headwind, offset by a tailwind from US weekly inventories showing increasing drawdowns.

In this issue of Equity Leaders Weekly, we take a look at two commodity markets which don’t usually attract attention from investors but have started to recently, steel and uranium. 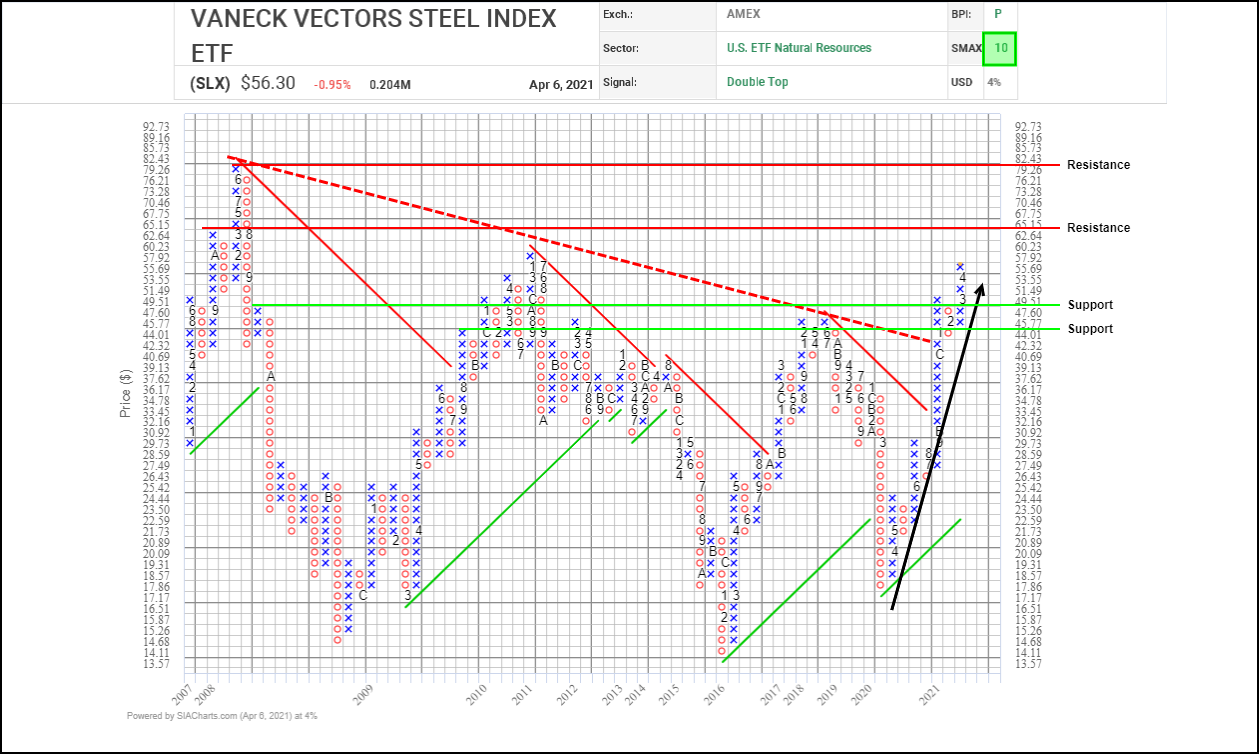 This long-term chart for the VanEck Vectors Steel Index ETF (SLX) shows that from its peak in June 2008, the price of steel trended flat to lower for over twelve years. In the last year, however, the price of steel has roared back to like on anticipation of an economic recovery. Rallying off of a higher low last March, SLX snapped a long-term downtrend line back in January, then broke through its 2017 peak to confirm the start of a new uptrend.

In the last few days, SLX has broken out to the upside once again, completing a bullish Double Top pattern. Investor interest in steel appears to have been stoked even further by the recent announcement of a $2.1 Trillion infrastructure spending plan by US President Biden, which could boost demand for construction related materials.

SLX is currently approaching its 2011 peak near $60.00 with next potential resistance after that possible near $65.15 and $82.45 based on previous highs dating back to 2007-2008. Initial support appears near $47.60 based on a 3-box reversal. With a perfect SMAX score of 10, SLX is exhibiting strength across the asset classes. 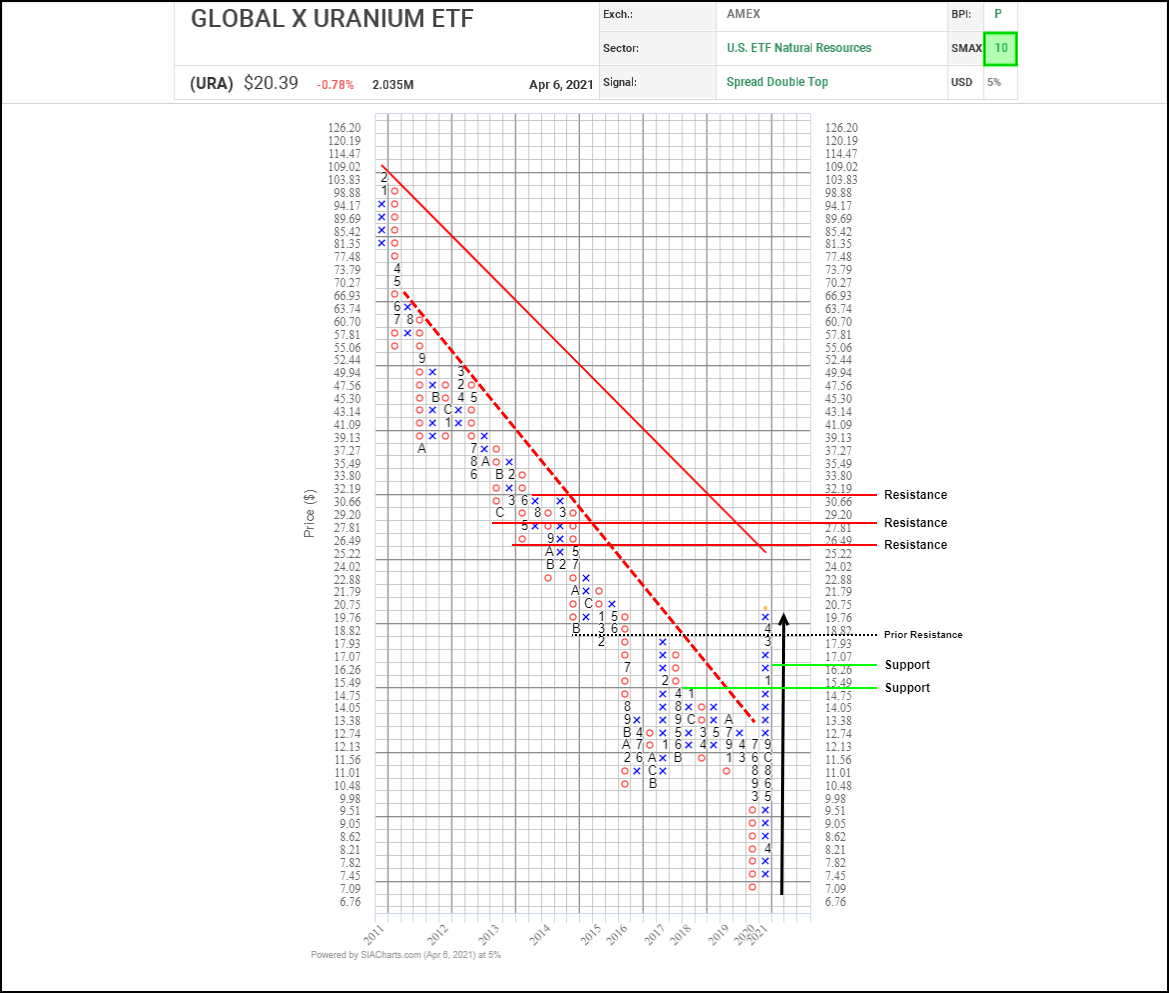 This long-term chart highlights the dramatic turnaround in the price of Uranium over the last year. Even before the Japanese nuclear disaster a decade ago turned many countries off of nuclear power for a time, depressing demand, the price of uranium had already been falling. For a decade, URA continued to steadily decline in an downward trend of lower highs and lower lows.

Last year’s commodity market crash appears to have provided the final flush for the uranium bear market sending URA below $10.00 before it finally bottomed out near $7.00. Since then, the ETF has been on the rebound. Last fall, URA snapped a downtrend line to signal the start of a new uptrend which has been confirmed by a series of bullish Spread Double Top breakouts.

Currently, URA is trading above $20.00 at its highest level since 2016 on speculation that new energy initiatives may help to boost future demand for uranium. Next potential upside resistance appears at a 45-degree downtrend line near $26.50, then the $29.20 to $32.20 zone where previous column highs and lows, a vertical count and a round number cluster. Initial support appears near $17.10 based on a 3-box reversal.