We have now moved into the heart of earnings season. Results have been arriving in droves and in most cases, coming in a lot stronger than expected. Investor reaction to this momentous earnings season, however, remains muted suggesting that in many cases, strong gains in individual stocks over the last year have already priced in strong earnings.

The news with the biggest impact on equities this week, along with commodities, is that the US ended the pause on J&J’s COVID vaccine, and openly talked about sharing its stockpile of tens of millions of doses of the AstraZeneca vaccine with other countries. These developments reignited sectors and markets which have the potential to benefit from economies reopening, demand for resources increasing, and higher infrastructure spending.

The Fed maintained its full-on dovish stance at yesterday’s meeting, maintaining low interest rates and asset purchases and indicating it is willing to let inflation rise above 2% for a period of time to help the economy get back up on its feet. This stands in contrast with the Bank of Canada starting to rein back in its asset purchase program last week. The Canadian Dollar has been climbing relative to the US Dollar this week, and the S&P/TSX has been on the rise as well, catching a tailwind from climbing commodity prices, including rallies for copper, grains, platinum, lumber and others. Last night’s speech from US President Biden indicated that fiscal support continues with no new negative surprises.

The coming week brings another flurry of results from companies on both sides of the border, with a particular focus on the energy, pharmaceutical, insurance, movie theatre, ride-sharing, travel, automotive, and forest products sectors. The turn of the month also brings a number of key economic reports including Manufacturing and Service PMI surveys from around the world and North American employment reports.

In this issue of Equity Leaders Weekly, we look at recent strength in the NASDAQ Composite and in the Canadian Dollar. 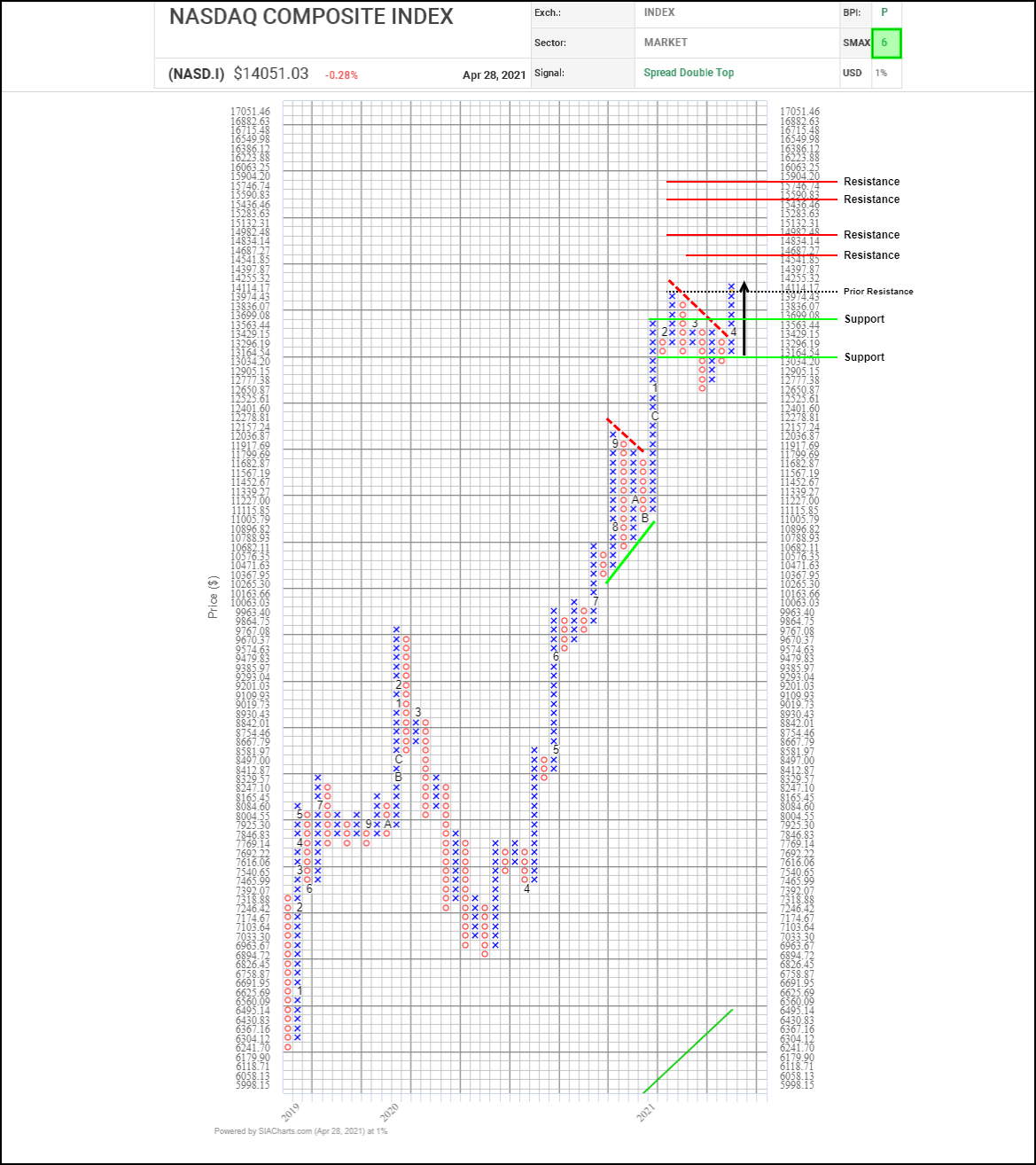 With its higher concentration in Technology, Communications, and Biotechnology stocks relative to the S&P 500, investors tend to look to the NASDAQ Composite as an indicator of investors appetite for growth/momentum stocks and their tolerance for risk.

Since bottoming out just over a year ago, the NASDAQ Composite Index (NASD.I) has been steadily climbing up a staircase pattern of rallies followed by periods of consolidation at higher levels. The shares had peaked back in February and spent six weeks in a consolidation phase as rising treasury yields raised concern among investors that the Fed may be starting to wind down their easy money stimulus party.

Over the course of April, FOMC members have made it clear that the US central bank intends to keep stimulus going for some time to come and is prepared to allow inflation to rise. Meanwhile, after peaking near 1.75%, the US treasury yield has settled back toward 1.60%.

With fears of Fed tightening fading, the NASDAQ Composite has resumed its upward course, snapping a downtrend and completing a bullish Double Top breakout followed by two larger, bullish Spread Double Top breakouts, the latest to a new all-time high, confirming the start of a new upleg. 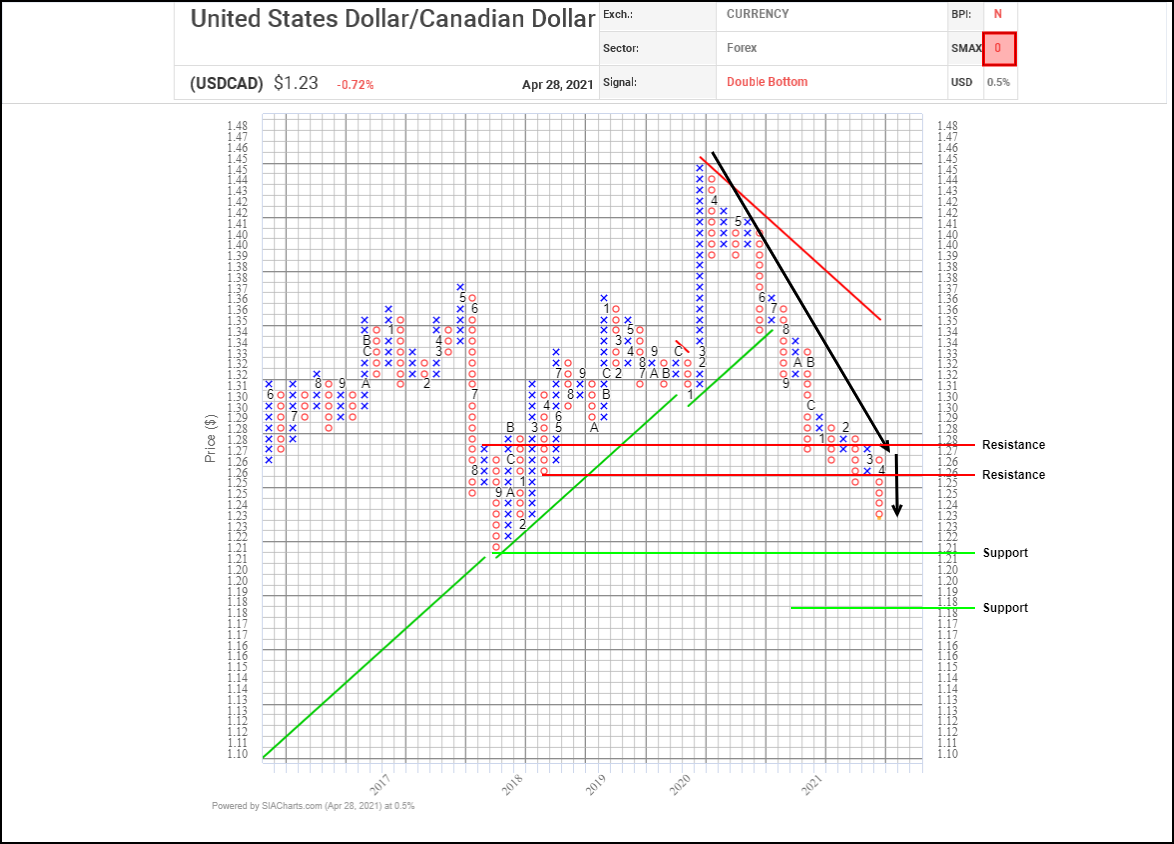 In the winter of 2020, the US Dollar soared against the Canadian Dollar on a combination of capital stampeding into the US as a perceived safe haven for capital when equity and commodity prices crashed. Over the remainder of last year, those crisis gains were unwound and by December, USDCAD was back below where it had started the previous January.

In 2021, the Canadian Dollar has continued to climb relative to the US Dollar driving USDCAD down below $1.2500. This move has been propelled by rising commodity prices (energy, metals and grains) helping the currencies of resource exporting countries such as Canada. This month, USDCAD broke down below $1.2500 and completed a bearish Double Bottom pattern, signaling the start of a new downleg. This latest move has been driven by monetary policy changes as the Bank of Canada has started to scale back its emergency stimulus asset purchase program which has made it relatively hawkish compared with the Federal Reserve Board, who remains in full on dovish stimulus mode.

USDCAD is starting to approach support at its previous low near $1.2100 set back in September of 2017 with additional support after that possible near the $1.2000 round number and then $1.1800 based on a horizontal count. Initial resistance on a rebound appears near the $1.2500 breakdown point, then $1.2600 based on a 3-box reversal.

The speed of the decline in USDCAD is also significant. The previous uptrend too 2 ½ years from the September 2017 low to the March 2020 peak. The decline back to within striking distance of the 2017 low has taken just over one year. This relatively quicker move in the currency pair has also had an impact on the relative strength of other asset classes between the two countries, particularly Canadian Bonds relative to US Bonds.