The arrival of May has brought renewed interest in stocks and particularly commodities, with catchup/reopening plays and small caps attracting particular attention.

Economic numbers have generally been positive and indicative of improving business conditions, particularly in the US where more states including New York have been announcing reopening plans. The few disappointments so far this week, such as US ADP payrolls (742K vs street 800K and previous 565K) were improved but not quite enough to catch up with aggressive street estimates.

Several more notable monthly reports are on the way before the end of the week including China trade, US nonfarm payrolls and Canadian employment.

In this environment, economically sensitive commodities such as crude oil and copper have been climbing, along with grains and other base metals such as uranium. One of the few concerns from this month’s PMI reports has been that the prices paid (inflation) component has been coming in higher than expected. So far, equities have taken this in stride, likely since the Fed has said several times recently that is plans to let inflation run a bit before tightening to help the economy get back up on its feet. Both the US 10-year treasury yield and gold, which historically have moved up with inflation, have been holding steady, keeping a possible headwind for equities at bay for now.

We are now into the back half of earnings season where many of the biggest companies have reported and the focus now turns to small and mid cap companies where are greater in number but generally lesser in impact individually, except for big surprises. Generally speaking, the majority of results to date have come in well above expectations but many stocks have only moved up marginally suggesting that many sectors may have already partly priced in a strong rebound. Canadian results dominate the coming week with seniors in the mining, energy, marijuana, pipeline, telecommunications and other sectors on the agenda.

In this issue of Equity Leaders Weekly, we look at recent strength in the prices of oil and rice, and what that means for markets. 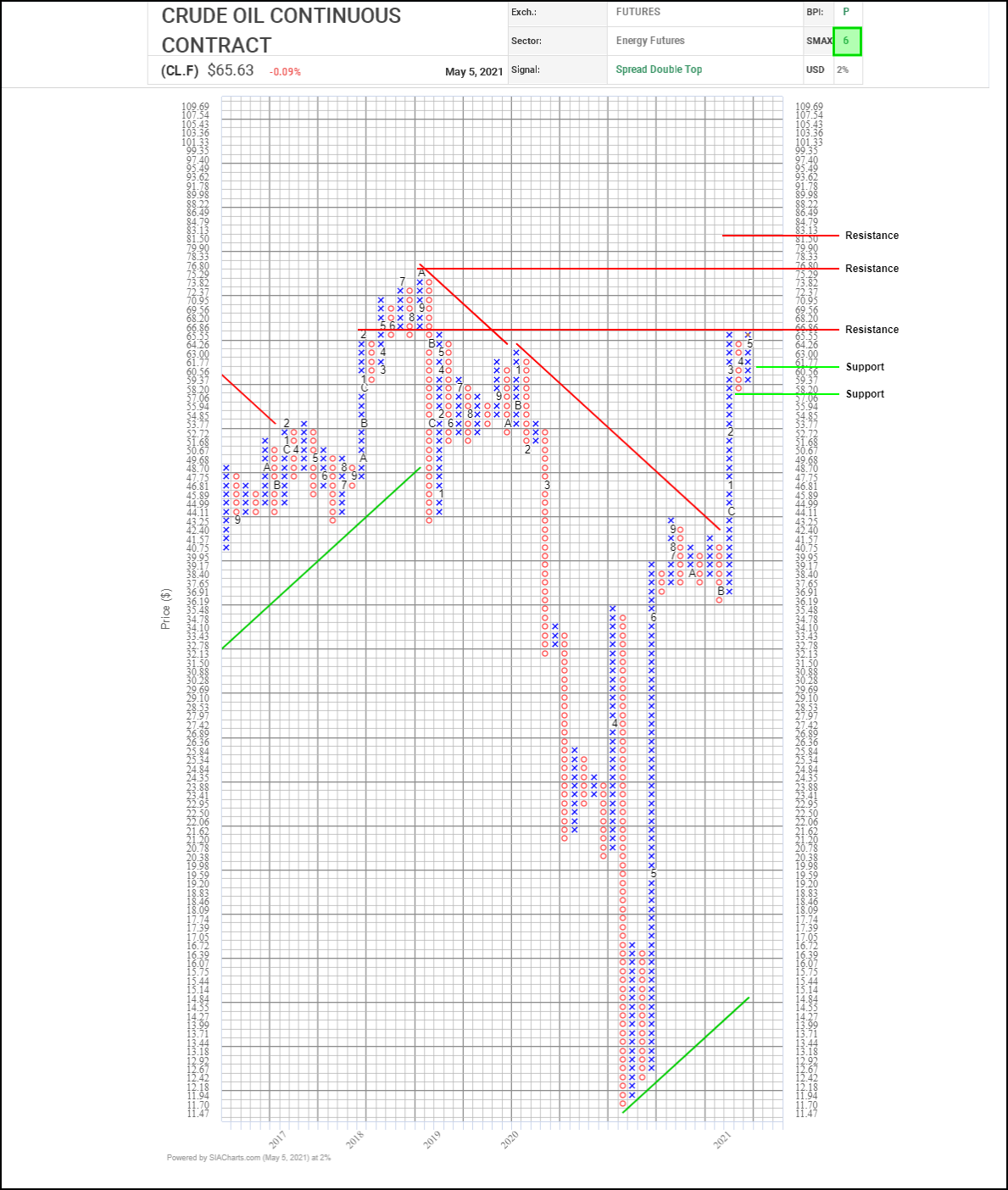 Since we last mentioned crude oil (CL.F) in the March 31st edition of Equity Leaders Weekly, it has continued to climb within the $57.05 to $66.85 range where it has been consolidating its October to March high pole advance that snapped a downtrend and nearly doubled the commodity price.Perhaps more significantly, oil settling into a higher range, and its recent advances has helped to spark renewed investor interest in other assets sensitive to the energy price including energy stocks and the Canadian Dollar.Currently, CL.F is testing $66.85, a point of resistance based on column highs dating back to 2018. A breakout would signal the start of a new upleg that could potentially challenge the 2018 peak near $76.80, ot $83.15 based on a horizontal count. If initial resistance holds, however, the current sideways trend would remain intact with initial support possible near $60.55 based on a 3-box reversal. 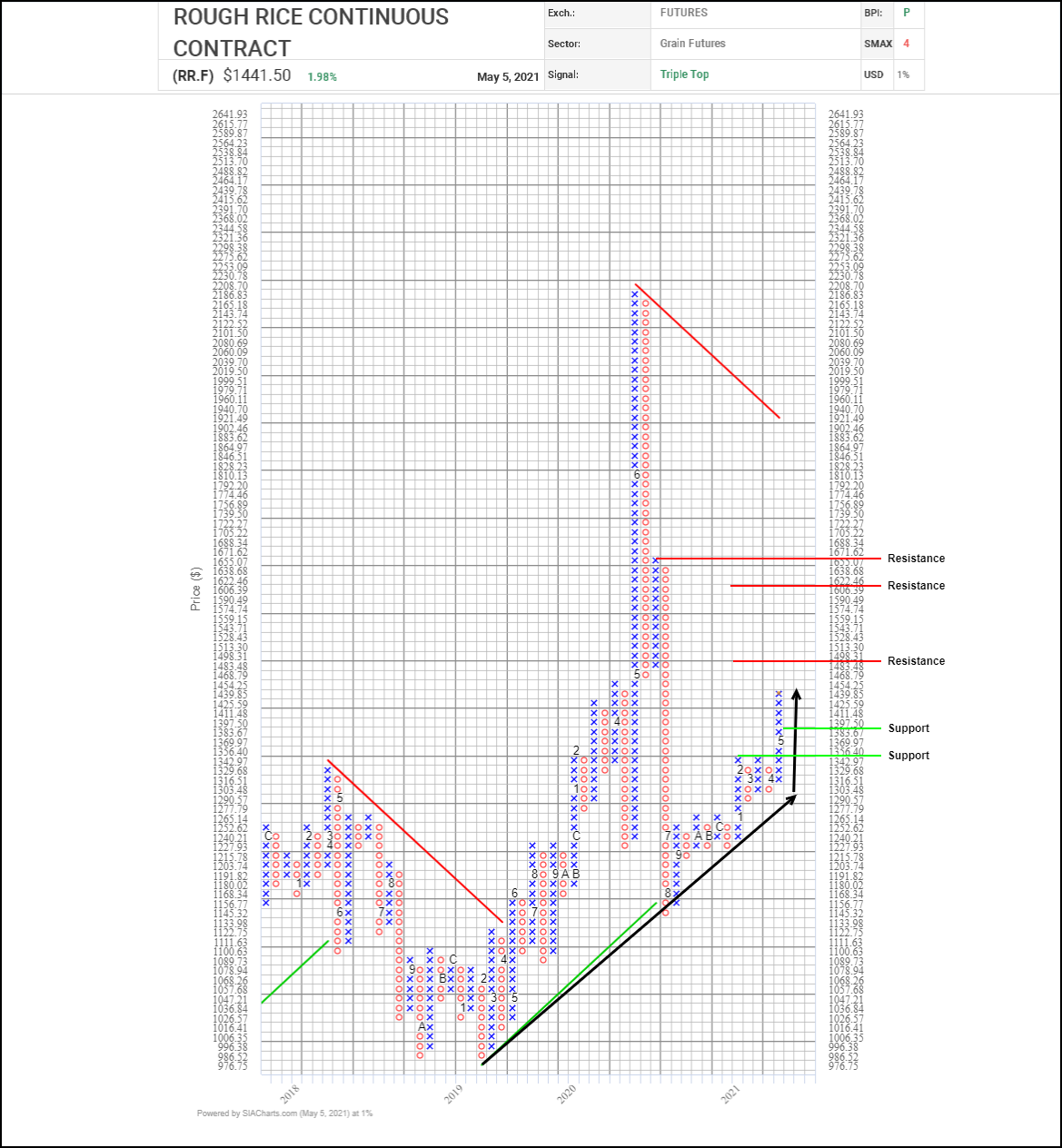 As one of the world’s staple foods, particularly in developing countries, the price of rice can give us insights into consumer demand and inflation pressures outside of North America. A year ago, the rice price soared then collapsed just as quickly.

Since the start of this year, Rough Rice (RR.F) has started to climb once again, first completing a bullish Triple Top in January, then confirming the start of a new uptrend with the recent breakout over 1,350 and the completion of a sector bullish Triple Top. This moderate advance suggests that while North America seems to be leading the global bounce back from the COVID crisis, recovery momentum in developing countries appears to be picking up as well.

Rice recently broke out over 1,355 completing another bullish Triple Top pattern and signalling the start of a new upleg after two months of consolidation. Vertical and horizontal counts suggest potential upside resistance near the 1,500 round number, then 1,625 on trend and 1,670 based on a previous X column high. Initial support appears near 1,385 based on a 3-box reversal.