Stock markets struggles into May have broadened out into other asset classes in the last week, suggesting that following a huge run over the last year, we may be seeing a trading correction or retrenchment unfold. In the last week, major indices have continued to trend sideways to downward, while the VIX Volatility Index has continued to drift upward, a sign that investor confidence may be starting to fade.

So far this retreat still appears to be a normal trading correction on profit taking with earnings season winding down and investors reacting to signs of inflation pressures building in both the US and Canada. This week, the stellar results which have come out from several of the largest US retailers have been greeted with shrugs and yawns indicating that market gains of the last year have already priced in high expectations. At the same time, indices have held above key round numbers such as 33,000 for the Dow Industrials, 4,000 for the S&P 500, 13,000 for the NASDAQ Composite and 2,100 for the Russell 2000. So far, these levels being defended suggests a “bend but do not break” situation, but if they fail, the dam could burst.

The biggest signs of investor fatigue and a retrenchment at the margins can be seen in how some of the hottest markets of the last few months, lumber and cryptocurrencies, have started to roll over and come back down. Cryptos in particular have been hit hard with China ordering its financial institutions to ban the use of cryptos in trading, payments and savings.

The coming week is relatively quiet for economic news with the main event being flash PMI reports on Friday morning. US retailers continue to report results through this week and into next. Next week is earnings week for Canadian banks. There are several items investors may look to in the bank numbers including whether they will reduce loan loss provisions like their US counterparts did last month, any comments on the Canadian economy related to commodity prices, the US reopening, current Canadian lockdowns, and any impact from the Bank of Canada tapering asset purchases.

In this issue of Equity Leaders Weekly, we look at relative strength among equity market sectors and recent action in Bitcoin as indicators of the current state of investor sentiment. 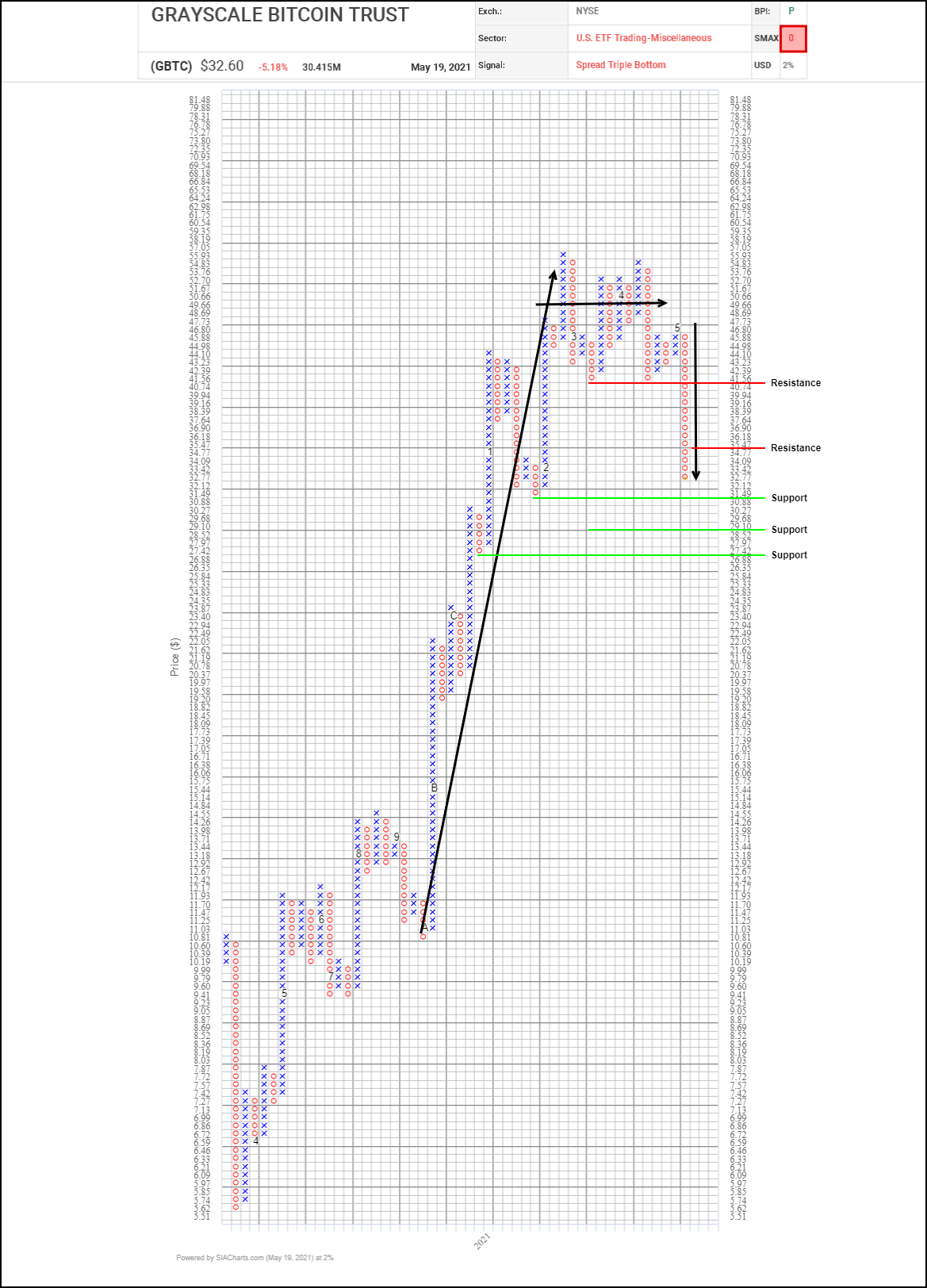 Earlier this year, several new cryptocurrency ETFs launched in Canada giving investors the ability to participate in market moves by Bitcoin and Ethereum. The US Grayscale Bitcoin Trust (GBTC) is used here because it has the longest history, dating all the way back to early 2018.

The chart highlights the rise and fall of Bitcoin over the last several months. After bottoming out in March of 2020, GBTC soared in a series of rallies from near $5.00 to a peak near $57.50 by February of 2021. Over that time the shares climbed a step pattern of advances followed by periods of consolidation at higher levels. Over the course of the advance, a series of bullish Spread Double Top breakouts accelerated into a series of High Poles.

From February through April, GBTC levelled off between $40.00 and $57.50 in what looked like another consolidation phase. Lower highs in April and early May, however, suggested that the tide was starting to turn against bitcoin. The decisive breakdown below $40.00 and the completion of a bearish Spread Triple Bottom pattern has confirmed that previous support has collapsed and a new downtrend has commenced.

Next potential downside support for GBTC appears at previous column lows near $30.90 and $26.90, along with $28.50 which is based on a horizontal count Initial upside resistance on a bounce appears near $35.45 based on a 3-box reversal. With a bearish SMAX score of 0, GBTC is exhibiting weakness across the asset classes. 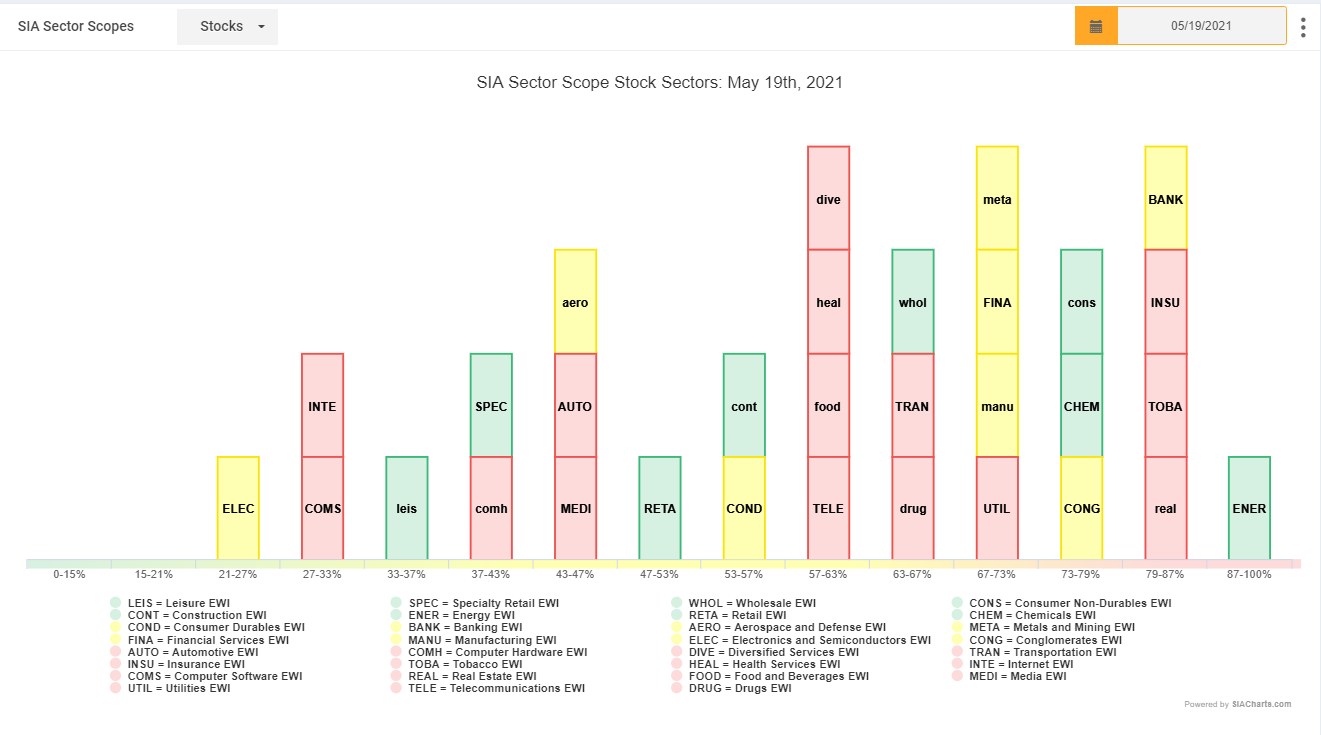 The Sector Scopes feature in SIA Charts, found in the Markets – BPI section, provides a visual snapshot of the relative strength of 31 equity industry group based on their bullish percent (percentage of stocks in the group on bullish technical signals).

At the moment, the sectors are spread fairly evenly across the spectrum, indicating a neutral phase neither overbought nor oversold. This also suggests we could be in a consolidation phase for the market where we may see more returns dominated less by overall market moves and more by differences in relative strength among stocks and sectors, particularly with such a wide divergence in relative strength among groups currently.

What is interesting is that the strongest groups (three rightmost columns) are mostly in commodity/catchup groups, (ENER, META CHEM), financial services (BANK, INSU), or defensive areas (CONS, WHOL). Conversely, the weaker, underperforming left-hand side is dominated by technology (ELEC, COMS, COMH) and communications (MEDI, INTE), groups which had benefitted from the stay-at-home economy and are now seeing capital leave as investors refocus onto reopening plays. This split also helps to explain why the technology-growth-communications-momentum weighted NASDAQ is underperforming relative to broader indices like the S&P 500 or the resource-financials dominates S&P/TSX.