Upward and downward swings seen in several markets over the last week have provided additional evidence to suggest that a common seasonal consolidation phase has commenced. Indices such as the Dow Industrials and the S&P 500 which had reached new all-time highs recently have pulled back into common 3-box corrections without any signs of a deeper downturn.

Meanwhile, indices which had been under pressure recently such as the NASDAQ Composite and the Russell 2000 have bounced back this week and appear to be establishing sideways consolidation ranges just below recent highs. Its not uncommon seasonally for stock markets to spin their wheels through the back half of May and June between earnings seasons and as warm weather and spring holidays arrive.

Meanwhile companies continue to put out strong results, particularly Canadian banks and US retailers. Unlike the muted response to many of the reports seen in the main part of earnings season, investors have been more willing to respond bullishly to strong results, suggesting that some results have even managed to outpace optimistic street forecasts and valuation.

This week has also seen a significant reversal of sentiment in currency trading. Cryptocurrencies which had been extremely hot in recent months cooled dramatically while their volatility has increased. With cryptos suddenly siphoning away less currency demand, and central banks (particularly Fed speakers and the RBNZ this week) indicating a willingness to let inflation run, precious metals have been bouncing back, particularly gold which has regained $1,900/oz for the first time since January. Meanwhile in commodity action, grains have turned downward in the last week, along with lumber.

The last days of trading for May are coming up, which for the US is Friday rather than Monday due to their Memorial Day holiday. The turn of the month brings a flurry of manufacturing and service PMI reports for countries around the world, which may indicate which economies are accelerating through May and which are stalling or lagging. In terms of earnings, results are due from the remaining Canadian banks and a few lagging retailers.

The coming week is relatively quiet for economic news with the main event being flash PMI reports on Friday morning. US retailers continue to report results through this week and into next. Next week is earnings week for Canadian banks. There are several items investors may look to in the bank numbers including whether they will reduce loan loss provisions like their US counterparts did last month, any comments on the Canadian economy related to commodity prices, the US reopening, current Canadian lockdowns, and any impact from the Bank of Canada tapering asset purchases.

In this issue of Equity Leaders Weekly, we look at how the NASDAQ appears to be pointing the way into a sideways spring and at the recent resurgence in precious metals. 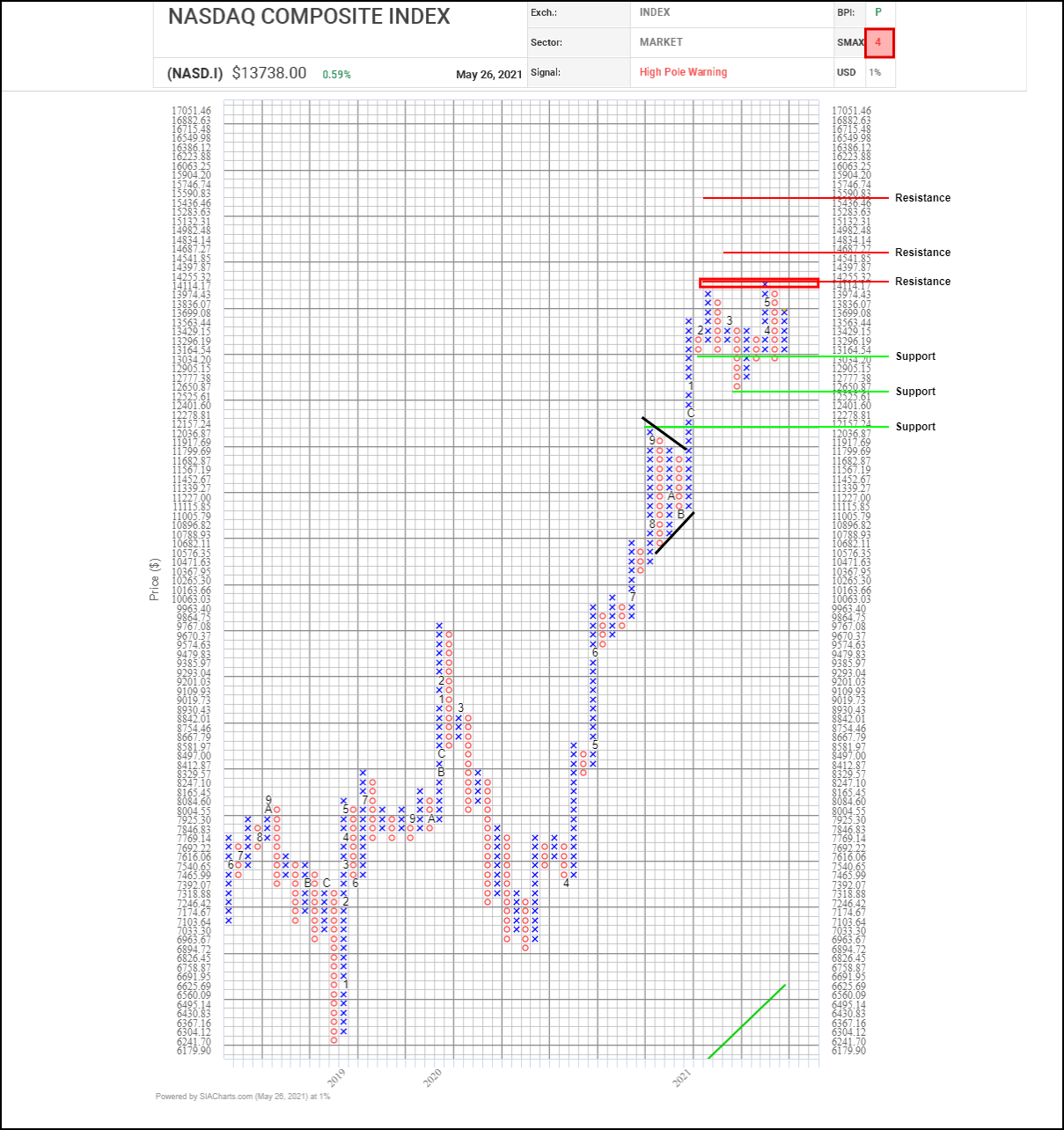 With its higher sensitivity to growth and momentum stocks, particularly in the Technology and Communications sectors relative to other major US indices, the NASDAQ Composite Index (NASD.I) has historically been seen by investors as a measure of investor aggressiveness, particularly their willingness to take on risk to chase growth.

In the last year or so, the sector composition of the NASDAQ has also made it the headline index for sectors which benefitted from the stay-at-home economy, particularly with its smaller weighting in sectors which were initially impacted by lockdowns such as Energy, Materials, and Transports.

Climbing out of the March 2020 market bottom, the NASDAQ Composite soared, retracing all of its losses and reaching new all-time highs by June, months ahead of many of its peers. After staging a symmetrical triangle consolidation through election season, the NASDAQ soared again between November and January.

Since February, the general trend for the NASDAQ Composite has shifted from upward to sideways primarily due to two factors. First, growth momentum for stay-at-home stocks has naturally slowed into 2021 with year over year comparisons becoming more difficult. Second, there has been a rotation of capital away from early recovery leaders (profit-taking in richly valued sectors) into value/recovery plays which have the potential to play catch up as economies reopen.

Back in March, a bearish Triple Bottom breakdown suggested a deeper correction was starting to unfold, but since then, the NASDAQ has regained its footing and established a trading range primarily between 12,500-13,000 and 14,000-14,250. Currently the index is in an upswing within this range, but with a bearish SMAX of 4, it is still exhibiting some weakness relative to the asset classes. 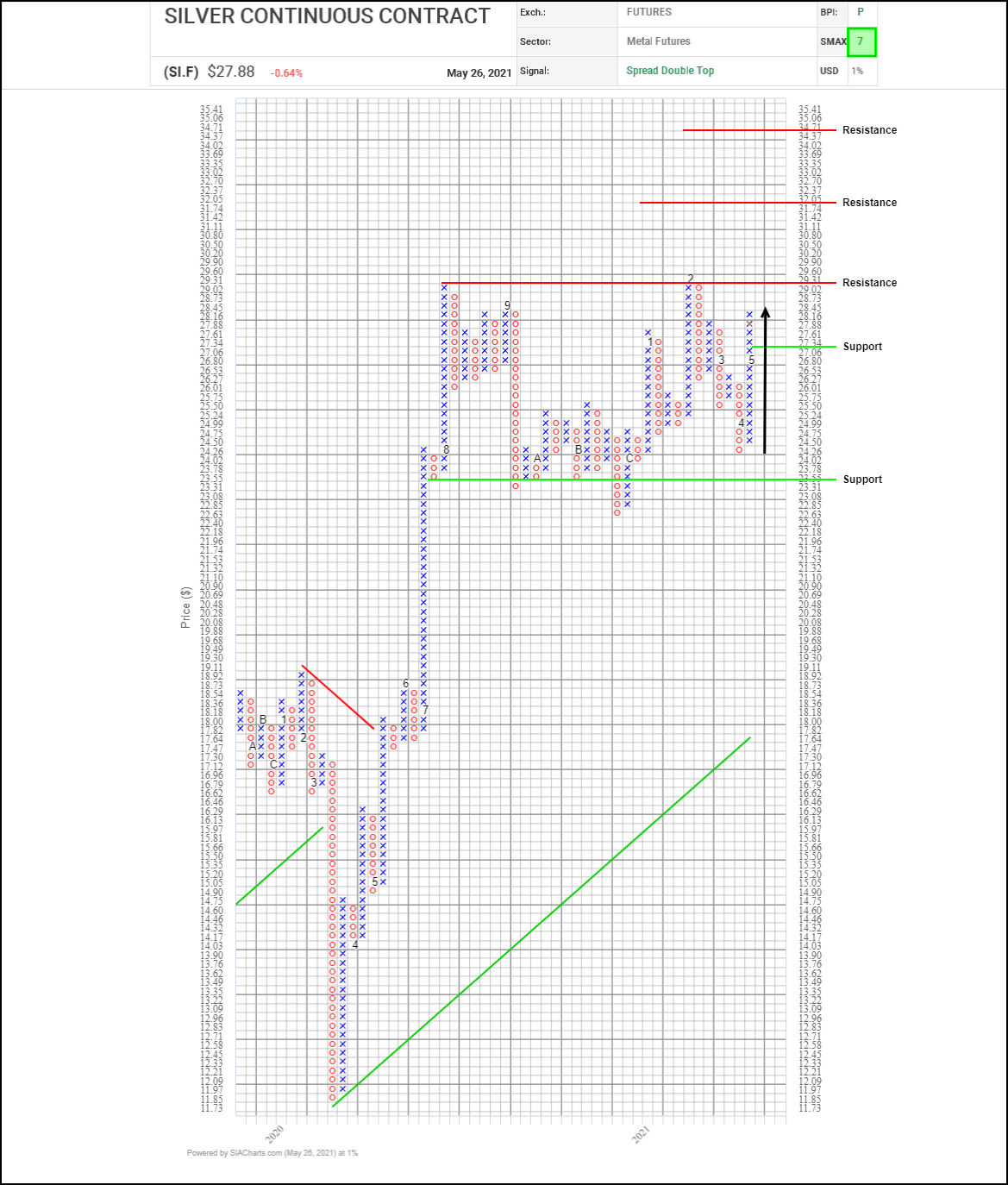 Since a massive recovery rally in Silver peaked last August, Silver has been trending sideways digesting its gains. Over the last nine months, a trading range has been established between $23.30 support and $29.30 resistance. Between February and April, Silver was drifting downward within this range, but in recent weeks, Silver has started to attract renewed interest, completing bullish Double Top and Spread Double Top breakouts on its way back up above $28.00 from a recent low near $24.00.

Gold and silver have attracted renewed interest lately as their role as hedges against inflation have come back to the forefront with central banks including the US Fed and more recently the Reserve Bank of New Zealand indicating a willingness to let inflation rise while keeping their stimulus programs running to support the current recovery. In addition, it appears that the headwind created in the winter as trading interest in alternative currencies shifted into cryptocurrencies like Bitcoin as started to fade, as we discussed in the May 20th edition of Equity Leaders Weekly.

Silver currently faces resistance in the $29.30 to $29.60 zone. On a breakout, resistance could appear near $32.00 or $34.70, based on vertical counts. Initial support appears near $27.00 based on a 3-box reversal. With a bullish SMAX score of 7, Silver is exhibiting strength relative to the asset classes.