Canadian equities often dwell in the long shadow of the larger, higher profile and some might say sexier (with all its big-name growth and momentum stocks), US stock market. This week, however, the Canadian stock market has seized the spotlight with the S&P/TSX Composite Index reaching 20,000 for the first time.

One of the biggest differences between the two markets is sector composition. While US indices, particularly the NASDAQ, tend to be more concentrated in Technology, Communications, and Health Care, Canadian indices tend to be more concentrated in Energy, Financials and Materials. A year ago, the NASDAQ soared up out of the March bottom as its largest sectors benefitted from the shift to a stay-at-economy while sectors with a higher weighting in Canada felt the impact of plunging commodity prices and soaring loan loss provisions.

What a difference a year has made. With the US well into its reopening and Canada preparing to get its reopening underway in the coming weeks, commodities, resource stocks and other reopening plays like airlines and movie theatres have been attracting renewed interest from investors who have been tactically rotating capital into reopening sectors after taking profits in some of the groups which had led the recovery last year. Financials have also been strengthening on the back of a stellar round of quarterly earnings from Canadian banks who were able to slash loan loss provisions with the North American economy improving.

The remainder of this week features a number of employment numbers which may give us an idea of whether the pace of recovery in the US is speeding up or slowing down, and how much of an impact the latest round of lockdowns in Canada has had on the economy. Next week is quieter for data but central bank meetings start to pick up again with the Bank of Canada and the European Central Bank expected to indicate their plans for monetary stimulus heading into the summer. We’re between earnings seasons now but there are a few results from retailers scheduled for next week including Gamestop in the US plus Dollarama and Roots in Canada.

In this issue of Equity Leaders Weekly, we look at some of the factors and sectors which have been underpinning recent gains in the S&P/TSX including the price of crude oil and the materials sector. 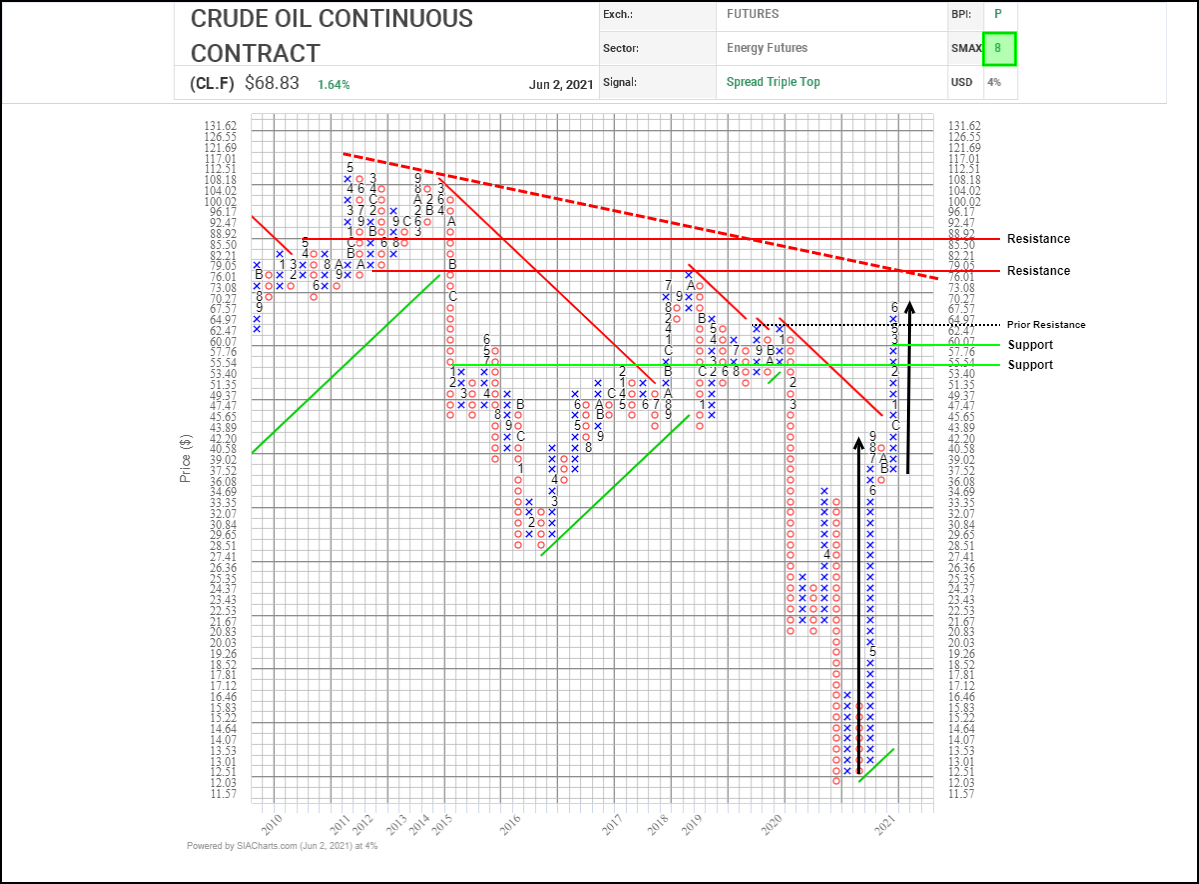 Since bottoming out a year ago, crude oil has been rebounding through a series of strong rallies followed by periods of consolidation at higher levels. Which an actual and anticipated recovery in energy demand has been underpinning the recovery for the most part, discipline on the part of suppliers has also helped.

This week on 1% charts, both Brent Crude (BC.F) and US crude oil have broken out to the upside completing bullish Spread Quadruple Top patterns. These breakouts indicate that a consolidation phase which started back in March has run its course and a new advance has commenced.

While positive economic numbers, such as better than expected Manufacturing PMI reports from around the world continue to support a demand recovery, supply management factors may also be playing a role. In recent days, it has become apparent that although the US and Iran have started to speak to each other again, it could be a long time before any sanctions are lifted. In addition, OPEC+ at their meeting this week confirmed their plans for moderate production increases through July without adding any more than what was expected for the time being.

The 4% chart shown here gives us a longer-term view of the trend in oil and potential points of resistance. The next key upside test for crude oil is in the $77.50 to $79.00 area where the price last peaked back in 2018. At that time, US President Trump opened the Strategic Petroleum Reserve to keep a lid on prices. It remains to be seen if new President Biden has a similar pain threshold, or if he would be more willing to let oil prices run. Don’t forget that through much of Biden’s previous time in office as VP under President Obama, crude oil traded above $100.00/bbl.A move up through $80.00 would also snap a downtrend line dating back to the 2011 peak and confirm the start of a new advance. Currently, initial support in a pullback appears near the $60.00 round number, then $57.75 based on a 3-box reversal. 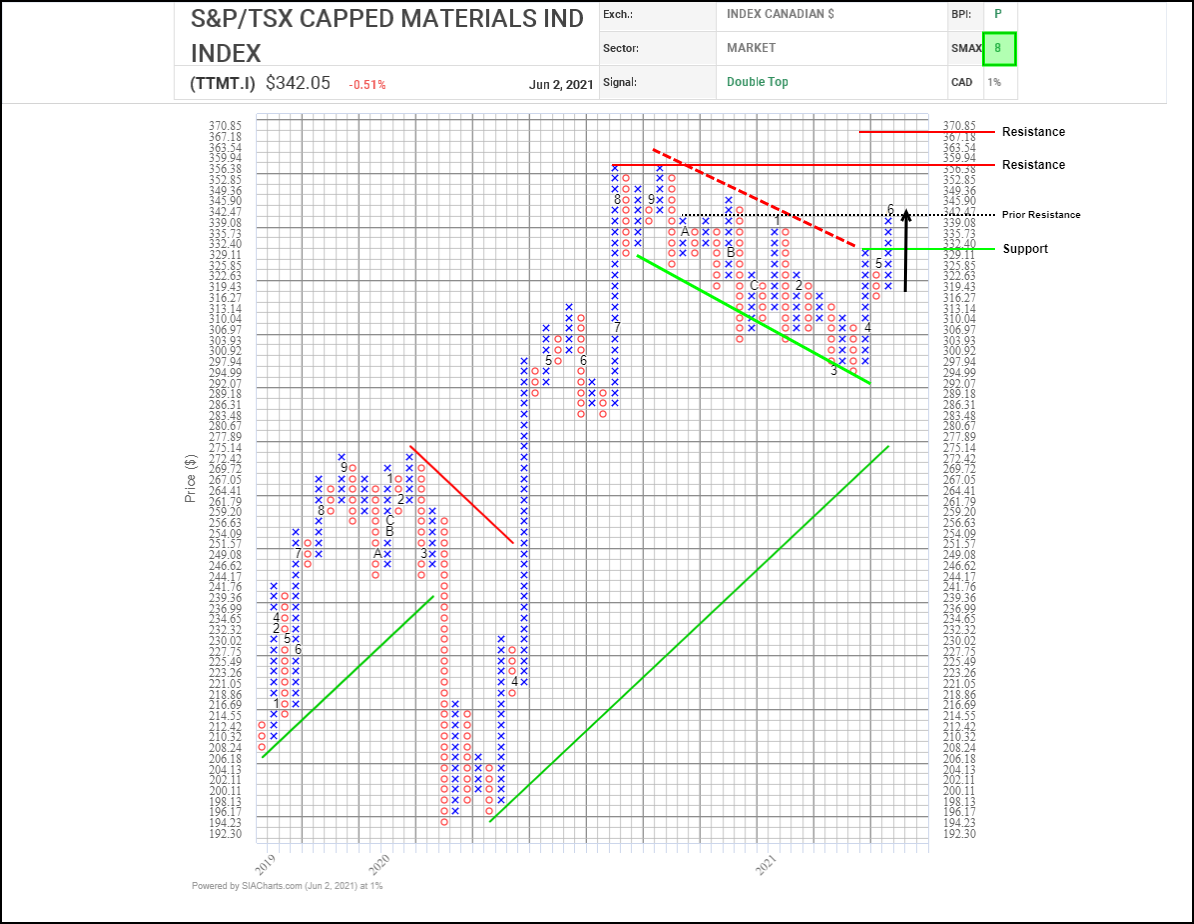 Since peaking last summer, the materials group in Canada drifted steadily back downward in a falling channel of lower highs and lower lows through to March. Since April, the sector has come under renewed accumulation with subgroup leadership evolving over time. The initial upturn back in March/April was led by copper miners and forest products companies as the prices of lumber and copper soared. As these two groups have started to lose momentum and lumber has gone into a sharp correction, other groups have taken up the torch.

This week, the S&P/TSX Capped Materials Index (TTMT.I) has broken out again, completing a bullish Spread Double Top pattern and snapping out of a falling channel to signal the start of a new advance. This time the rally has been led by gold and silver producers, who have been gaining on the back of rebounding precious metal prices and the producers of other base metals including lithium and uranium.Next potential upside resistance appears at the August peak near 360.00, followed by 370.85 based on a vertical count. Initial support for the index appears near 329.10 based on a 3-box reversal. With a bullish SMAX score of 8, TTMT.I is exhibiting strength against the asset classes.