The arrival of earnings season has coincided with an increase in volatility across equity markets. Although initial earnings reports from US banks and a few others were positive, stocks initially retreated as investors looked to news as an opportunity to take profits off the table suggesting that previous advances had already priced in high expectations for strong numbers.

Meanwhile, lingering concerns over the potential impact of a COVID Delta wave weighed heavily on commodity and reopening sensitive sectors such as energy, materials, transports and others. Technology stocks, however, were less impacted indicating that trend of sideways consolidation for indices and of rolling takedowns and rebounds continues. Monday’s selloff for now appears to have been a short-term washout, as a number of stocks have started to bounce back over the last two days. Most notably, the Russell 2000 Index bounced up off of a significant support level to keep its sideways trend intact.

The next two weeks bring us through the heart of earnings season especially for big cap stocks, with over 1,200 North American listings set to report next week alone. The breadth of sectors reporting results continues to expand from the big banks into Big Tech, Big Oil, Big Pharma, Big Miners, consumer products and other groups. So far, results have been coming in significantly better for the most part but the response from investors has been muted. The coming ten days may give a better inclination as to whether investors are looking to support positive news or take profits against positive developments.

With the end of the month approaching, economic announcements start to ramp up again, starting on Friday with flash PMI reports from around the world and Canadian retail sales on Thursday. Next Wednesday, the Fed is holding its mid-summer meeting which is usually pretty quiet with the US central bank usually preferring to wait for its annual Jackson Hole Symposium in August for updating forecasts and unveiling changes to its economic or monetary policy outlook.

In this issue of Equity Leaders Weekly, we look at the implications of the Russell 2000 passing a key technical test this week, and at what recent action in the price of wheat is telling us about inflation heading into next week’s Fed meeting. 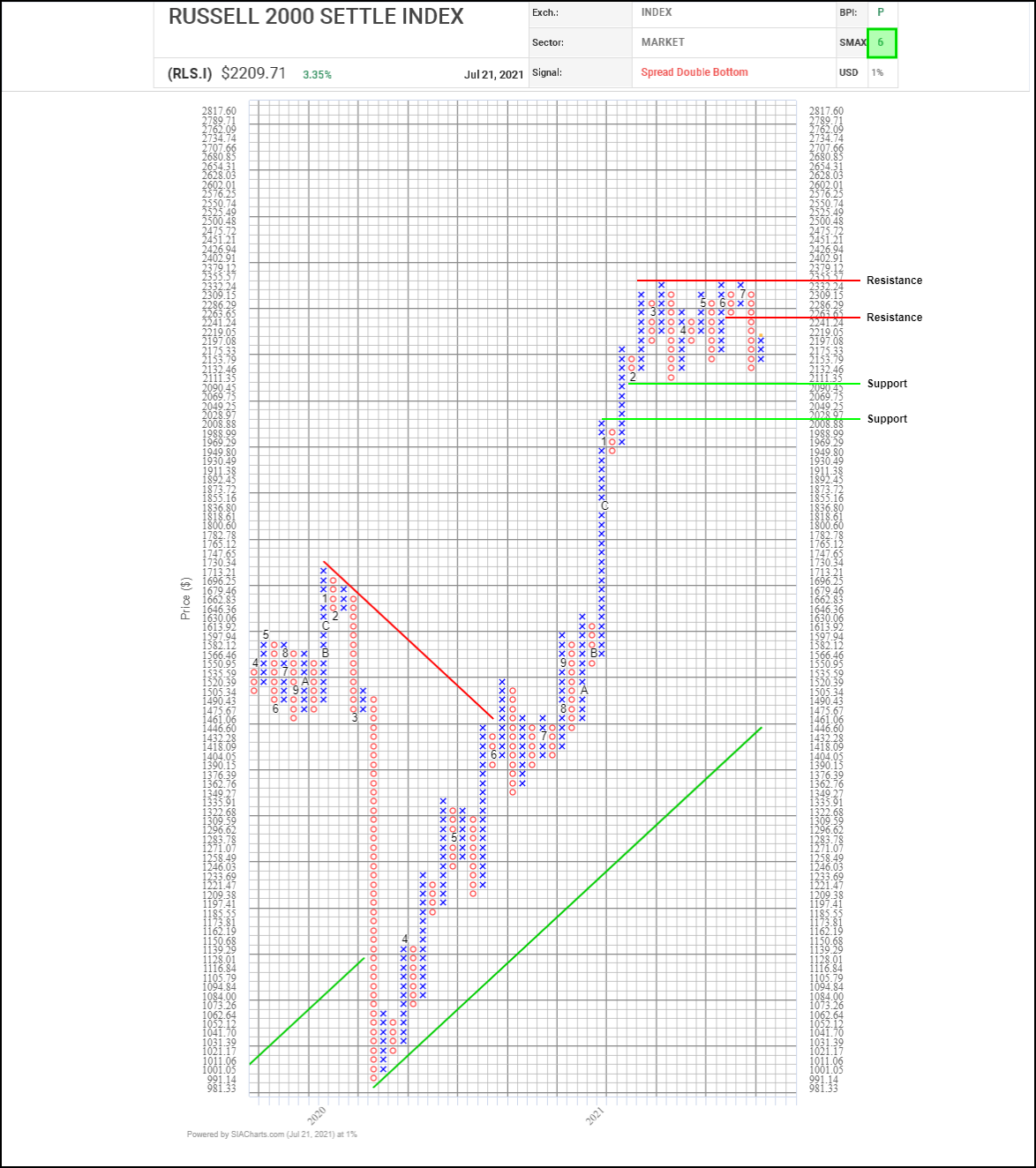 In last week’s issue of the Equity Leaders Weekly, we compared trading activity in the Russell 2000 Index (RLS.I) plus the Dow Jones Transportation Average against the large cap S&P 100 Index as presenting a potentially ominous sign for markets. This week, we revisit the Russell 2000 following a key successful support test.

Investors should note, however, that action in the Russell 2000 remains a significant indicator of investors appetite for risk. Should RLS.I fall below 2,100 it would not only be a bearish sign for small caps, but a canary in the coal mine that a deeper equity market downturn may be starting. A breakout over 2,355 would be either a bullish signal or a bullish confirmation for a new equity market advance. 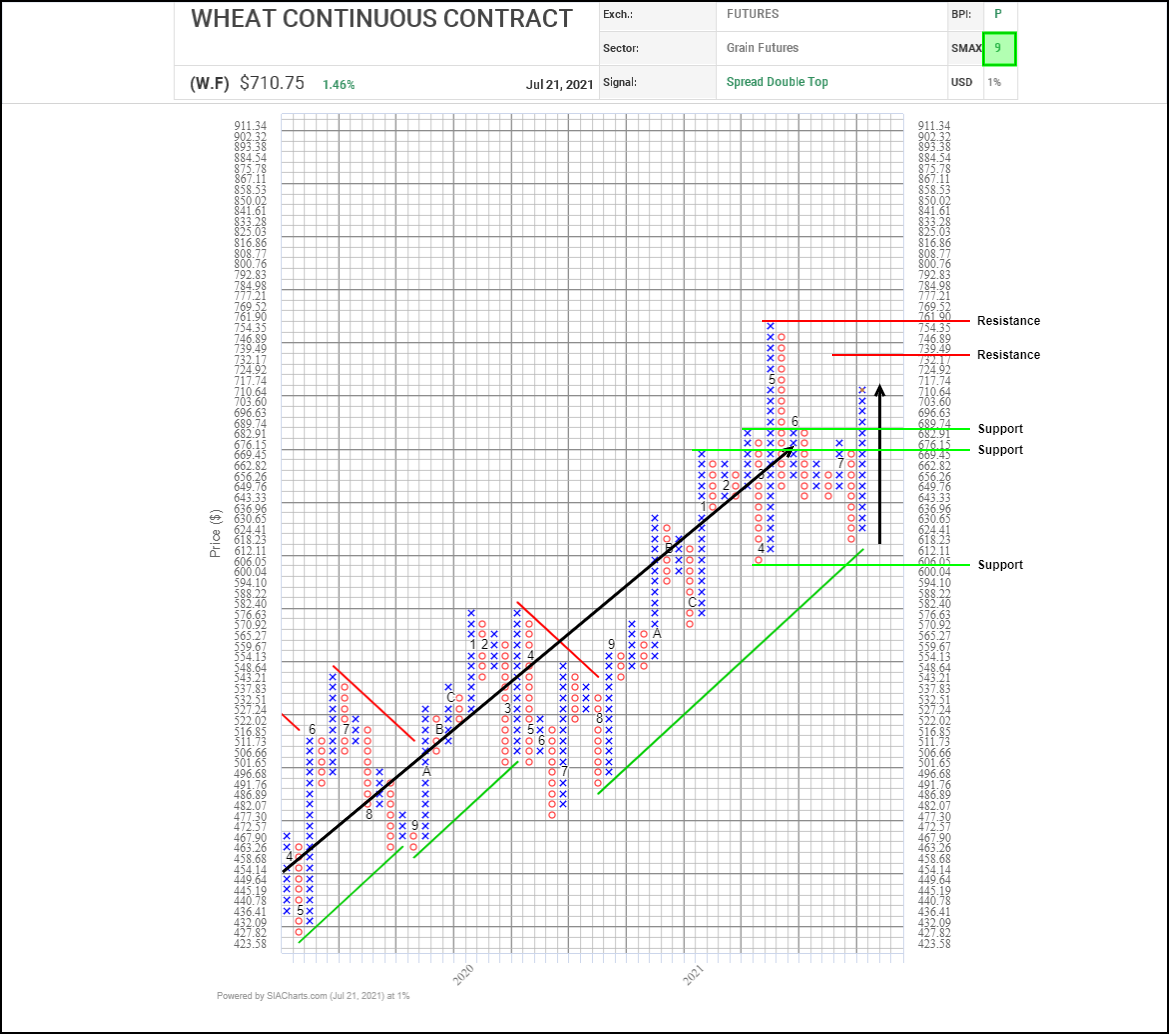 Although no major decisions or changes are expected to come out of next week’s Fed meeting, comments from the central bank related to economic conditions and inflation could still have an influence on investor attitudes and capital flows between asset classes.

Earlier this year, rising commodity prices sparked concern that inflation pressures may build and force the Fed to scale back stimulus and raise interest rates, pushing the US 10-year treasury yield to a peak near 1.75%. For the last several months, Fed officials have been talking down inflation, calling it transitory, which over time has pushed the 10-year treasury yield back down toward 1.25%.

The Fed’s transitory outlook for inflation pressure mainly appears to be coming from the commodity price component to inflation. A year ago, commodity prices in general were depressed and have rebounded strongly over the last year. Over the next year, commodity price inflation is widely expected to ease naturally as higher comparison numbers are encountered. Also, some commodity prices, particularly lumber and to a lesser extent oil and gasoline, have started to come back down suggesting inflation pressures could ease.Recent volatility in the price of wheat, however, suggests that inflation pressures have not gone away completely as food prices continue to rise. Wheat has generally been trending upwards for over two years, but after soaring in April and May, wheat staged a correction through June and into July. Earlier this month, things were looking bleak for Wheat as it staged a bearish triple bottom breakdown. After retesting uptrend support and its April low, Wheat has roared back upward completing bullish Double Top and Spread Double Top breakouts and rallying to its highest level since May.

Upside resistance tests appear near 739.50 based on a horizontal count, then the previous peak near 761.90. Initial support appears near 682.90 based on a 3-box reversal.Action in grains and livestock are important as indicators of rising and falling inflation in food prices. In the Fed statement investors may also look for comments related to wage inflation, which has tended to be more lasting and less transitory.