The middle of August to the middle of October has historically been the weakest and most volatile time of the year for stock markets over the last century. Following the end of summer earnings season, the dog days of August and the end of holidays in September has historically been a time when investors and policymakers reassess their holdings and their outlooks for the remainder of the year.

Capital appears to be in rotation out of higher risk areas including North American small caps (both the Russell 2000 and the S&P/TSX Venture Indices have been falling), emerging market indices and cryptocurrencies. Some capital has started to rotate toward safer shores this week. The Japanese Yen and the US Dollar have been climbing in particular, with gold and US bonds staging moderate rebounds.

Several forces appear to be driving this turn in investor sentiment toward caution. First, the sudden collapse of Afghanistan’s government and the return of the Taliban may have rattled investors out of complacency and provided a stern reminder that geopolitical risk parameters can change swiftly. Second, the growing COVID Delta wave in several countries has raised concerns about the possibility for yet another wave of restrictions and disruptions to the world economy. Third, some investors may be starting to position ahead of next week’s Fed Jackson Hole Symposium, which is a forum that Fed chairs have used in the past to signal changes in the direction of monetary policy.

Earnings season wraps up next week with reports from the Big Six Canadian banks which are scheduled for Tuesday the 24th to Thursday the 26th. This fiscal quarter covers May to July, the first half of which saw much of the country locked down. The second half of the fiscal quarter saw the country reopen again as vaccinations rolled out but was uneven with some provinces opening more quickly and more fully than others. Because of this, results may be a bit distorted, but it will be interesting to see if managements continue to reduce loan loss provisions and free up capital. Investment banking and trading results may be impacted by the choppiness of the quarter, compared with the stronger market gains of previous quarters.

In this issue of Equity Leaders Weekly, we look at what a rising US Dollar and a falling Copper price are telling us about investor attitudes and expectations. 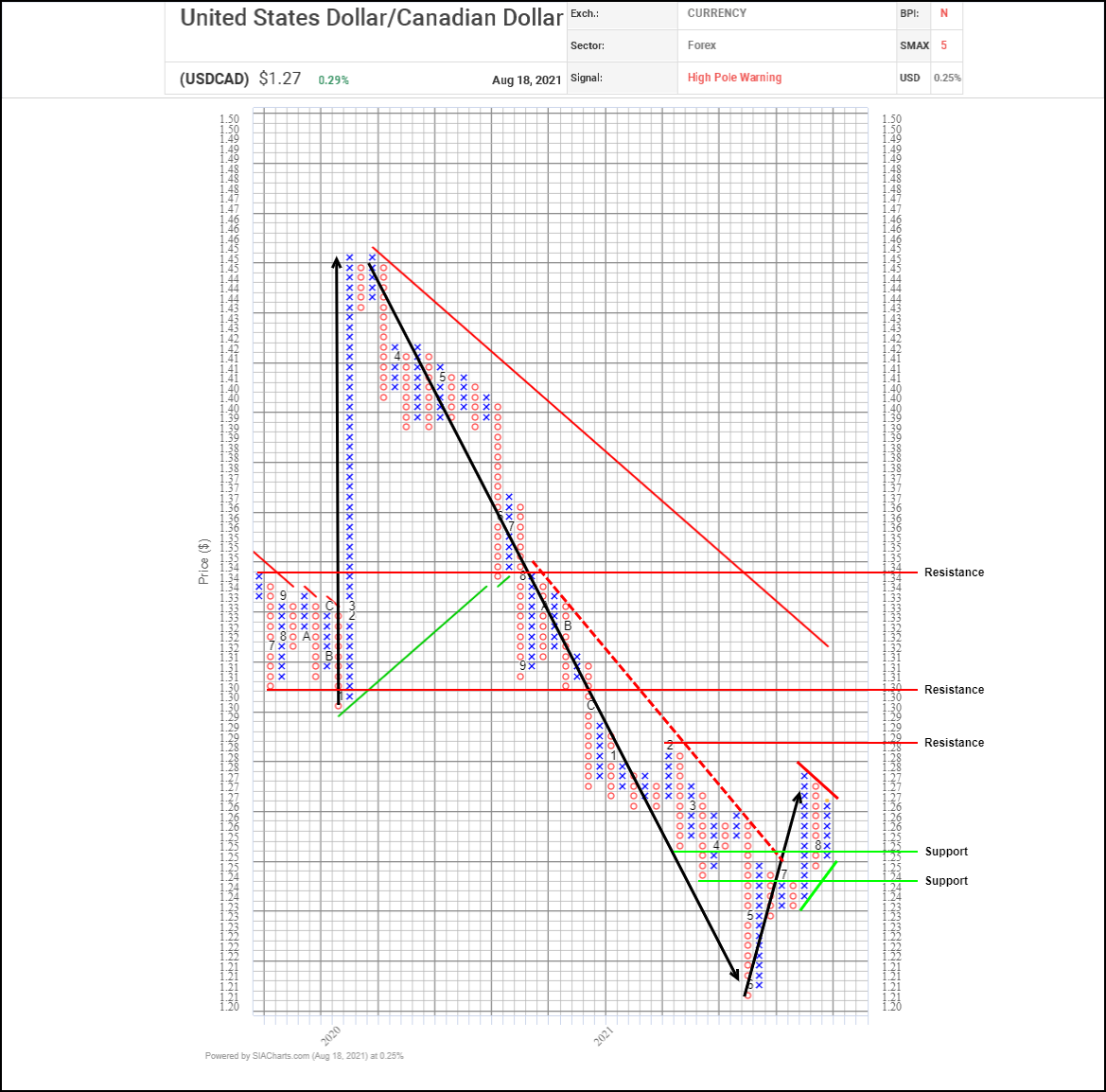 The last two years have seen dramatic change in the trading relationship between the US Dollar and the Canadian Dollar. The greenback soared against other currencies during the severe market turmoil of February-March 2020 as capital sought relative safety in the US. From March 2020 through to June of 2021, the US Dollar steadily retreated relative to other currencies, and particularly the loonie which received a boost initially from a strong rebound in commodities and later from the Bank of Canada becoming more hawkish relative to the Fed.

Since June, the US Dollar has started to rebound relative to the Canadian Dollar and USDCAD broke out of a downtrend in July. In recent weeks, a symmetrical triangle of higher lows and lower highs has been forming, a sign of consolidation, between $1.2400 and $1.2800. A breakout over $1.2800 would confirm the start of a new uptrend with next potential resistance at the $1.3000 round number, then a downtrend line near $1.3200.

Speculation among investors that rising inflation could increase pressure on the Fed to start tapering its asset purchase and other monetary stimulus programs has boosted US traded interest rates, most notably the 10-year treasury note yield, which has shored up support for the US Dollar. Meanwhile, support for the Canadian Dollar from commodity prices has faded, while the Bank of Canada impact has already been factored in. At this point the Canadian election campaign has not had an impact on the loonie although this could change down the road depending on the result.

The previous downward trend in the US Dollar relative to the Canadian Dollar had been one of the factors propelling CAD Equity to a higher ranking than US Equity in the SIA Charts Asset Class Rankings. This relationship could change, however, if the US Dollar continues to climb relative to the Canadian Dollar. Changes in the relative performance of sectors (Canada is more sensitive to Energy and Materials, US is more sensitive to Technology, Health Care and Consumer Discretionary) may also influence their relative rankings. 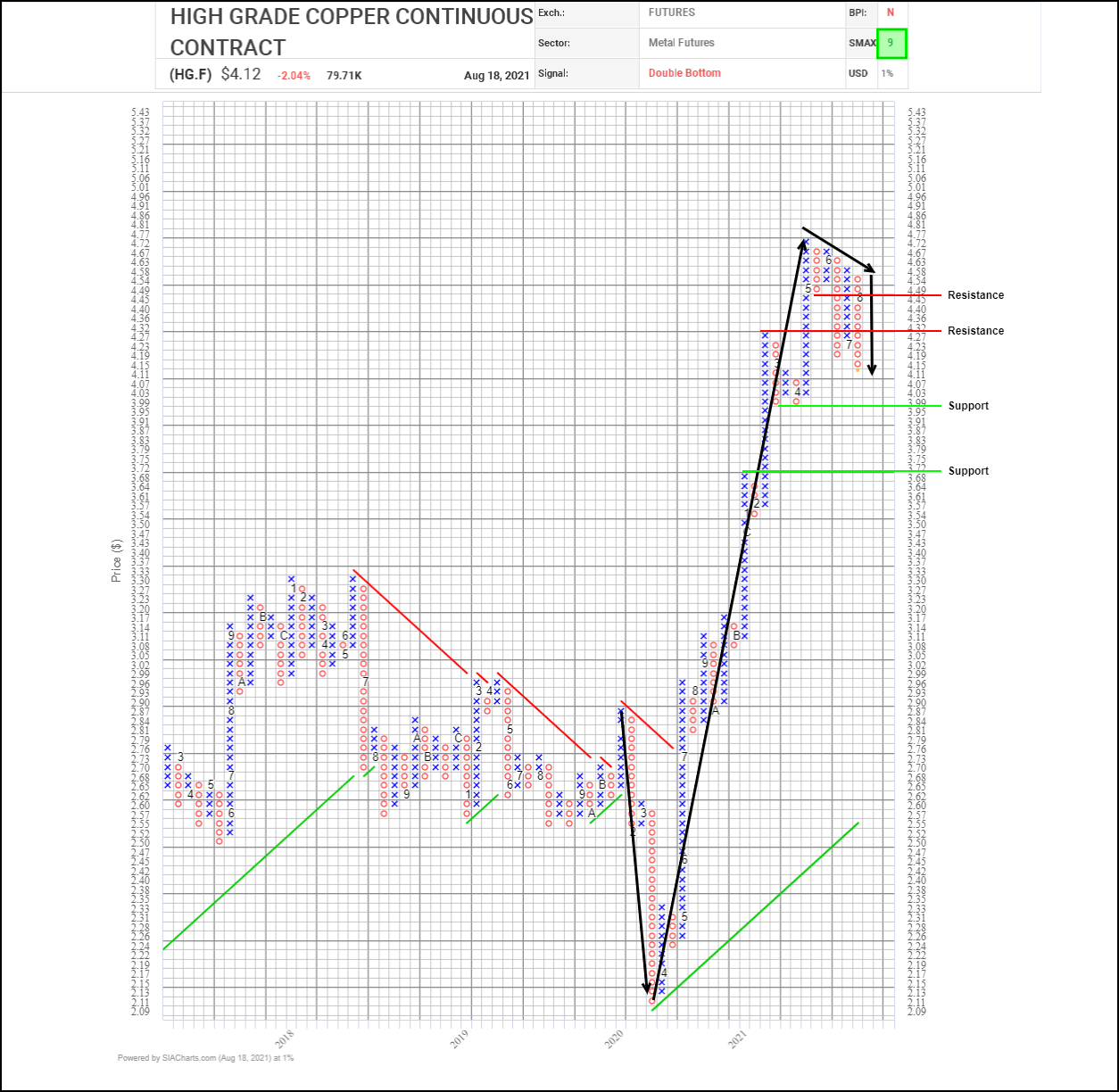 With its wide variety of consumer, industrial and construction applications, copper is widely considered to be the commodity most sensitive to global economic conditions. After falling off a cliff in early 2020 as the Covid Pandemic started, copper bottomed out in March of 2020 and staged a strong recovery through to May of 2021 on anticipation of a reopening world economy and recovery in demand for resources.

Since peaking in May, however, the copper price has faltered and accumulation has shifted to distribution. The first big crack appeared with a correction in June that a July rebound was unable to completely erase. This month, copper has turned downward once again, taking out its June low to complete a bearish Double Bottom pattern and signal the start of a new downtrend.

Next potential downside support for copper appears between $3.95/lb and $4.00/lb between a round number and previous lows, followed by $3.68. It would take a bounce back above $4.32/lb to trigger a 3-box reversal into an X column with more resistance possible near $4.50/lb.