For the last seven months, equity markets have been trending flat to slightly positive in a normal mid-cycle consolidation phase amid a series of rolling takedowns and rebounds that has seen divergent sector action offset each other. Bouncing back from a correction earlier this month, equity markets have regained some of their mojo in the last few days. Investors have been responding favorably to generally positive earnings reports from a wider variety of sectors over the last few days, sending the Dow Industrials and the S&P 500 to new all-time highs.

We are now approaching a potentially critical juncture for equity markets. The next seven to ten days is so jam-packed with earnings, economic, political and central bank events that upcoming developments could set the trading tone for the next four to six months. With the arrival of November, we move from the historically seasonally weakest time of the year for stocks to the seasonally strongest time of the year which runs through April.

The peak of earnings season continues with results due from thousands of companies on both sides of the border. In particular this is peak week for Canadian results, with results due from senior companies across the spectrum of sectors (except the banks who report a month from now). On both sides of the border, energy, insurance, fertilizer, clothing, and communications companies are reporting. In Canada, we also expect more results from senior stocks in the technology, airline, mining, and auto sectors. In the US, travel (hotels/casinos/concerts/reservation sites), video games, ride sharing, and online retailers, are also among the headlining groups.

The turn of the month also brings a flurry of economic numbers starting today with US Q3 GDP and continuing into next week with manufacturing PMI reports on Monday, Service PMI reports and US ADP Payrolls next Wednesday and US nonfarm payrolls plus Canada jobs next Friday. Investors may look to these reports for indications of inflation pressures and how economies are doing coming out of the Delta Wave.

Economic news may continue to be viewed through the lens of whether this increases or decreases pressure on central banks to slow asset purchases and/or raise interest rates. Yesterday, the Bank of Canada announced the end of asset purchases and moved up its timetable for the first interest rate hike to the “middle quarters” of 2022 from the second half of 2022.

Overnight, the Bank of Japan and the European Central Bank both remained dovish, indicating plans to continue asset purchases at current levels into 2022 at least. Monday the Reserve Bank of Australia, who has remained in the dovish camp in contrast to the hawkish Reserve Bank of New Zealand, is meeting.

All of this leads up to next Wednesday’s US Fed decision which investors have been looking to for signs of whether central bank is ready to start tapering back asset purchases or not. Based on previous hints, investors appear to be expecting tapering to start before the end of the year and continue over a 6-8 month period to mid-2022 with rate hikes to follow in the second half of next year. How investors react to the potential for the easy money party to end relative to inflation concerns and what tapering decisions say about the health of the economy and the prospect for corporate earnings could have a big impact on equity market sentiment moving forward.

In this issue of Equity Leaders Weekly, we look at the implications of central bank decisions on the US Dollar / Canadian Dollar Exchange rate and provide an update on our discussion of Dow Theory from two weeks ago. 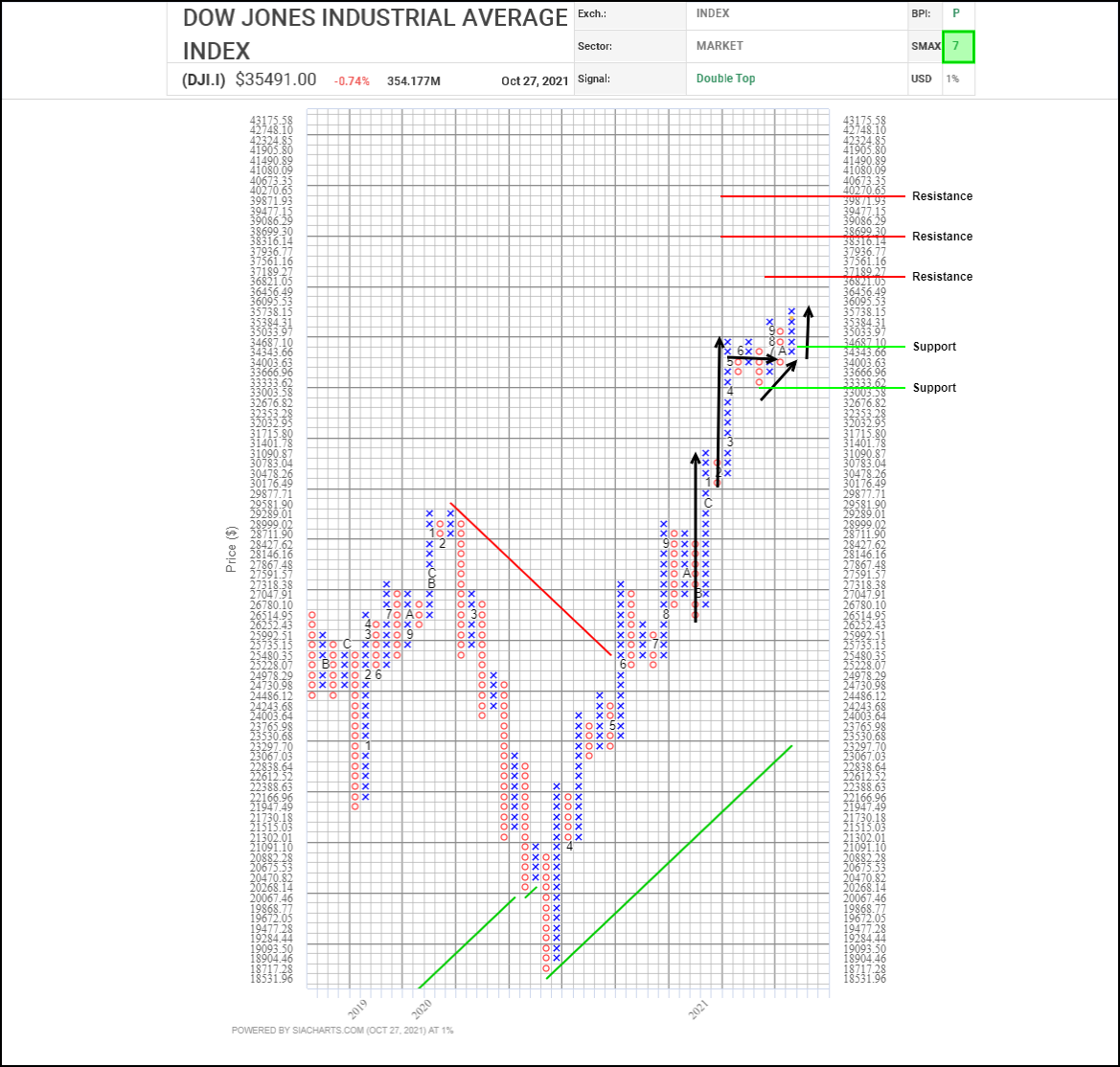 In the October 4th issue of the Equity Leaders Weekly, we compared the technical situation of the Dow Jones Transportation Average (DTX.I) and the Dow Jones Industrial Average (DJI.I) in the context of Dow Theory. Over a century ago, Charles Dow, the father of western technical analysis, wrote a series of articles on market trends and outlined a series of rules, one of which is that for breakouts and trends to be valid, the Dow Industrials and the Dow Transports must confirm each other.

Two weeks ago, the Dow Industrials were advancing and the Dow Transports were starting to show signs of life bouncing back from a selloff. Since then, the Dow Industrials have continued to climb to new all-time highs and on Tuesday, the Dow Transports completed their recovery by closing at a new all-time high of their own (barely), potentially confirming the start of a new advance for the US market, but then both the Industrials and the Transports rolled down a bit yesterday. For investors who would like to see more confirmation, the Dow Transports need to close above 1,606 on a 1% point and figure chart, which would complete a bullish spread triple top pattern, or above the previous intraday peak near 1,616.The Dow Jones Industrial Average (DJI.I) spent three months over the spring and summer stuck in a sideways range as it consolidated two high pole advances from earlier in the year. Last month, the shares broke out to a new high and completed a bullish Triple Top pattern. Earlier this month, a higher low in a correction confirmed that the shares long-term uptrend has resumed. This week, the index has broken out again, completing a bullish Double Top and signaling the start of a new upleg. 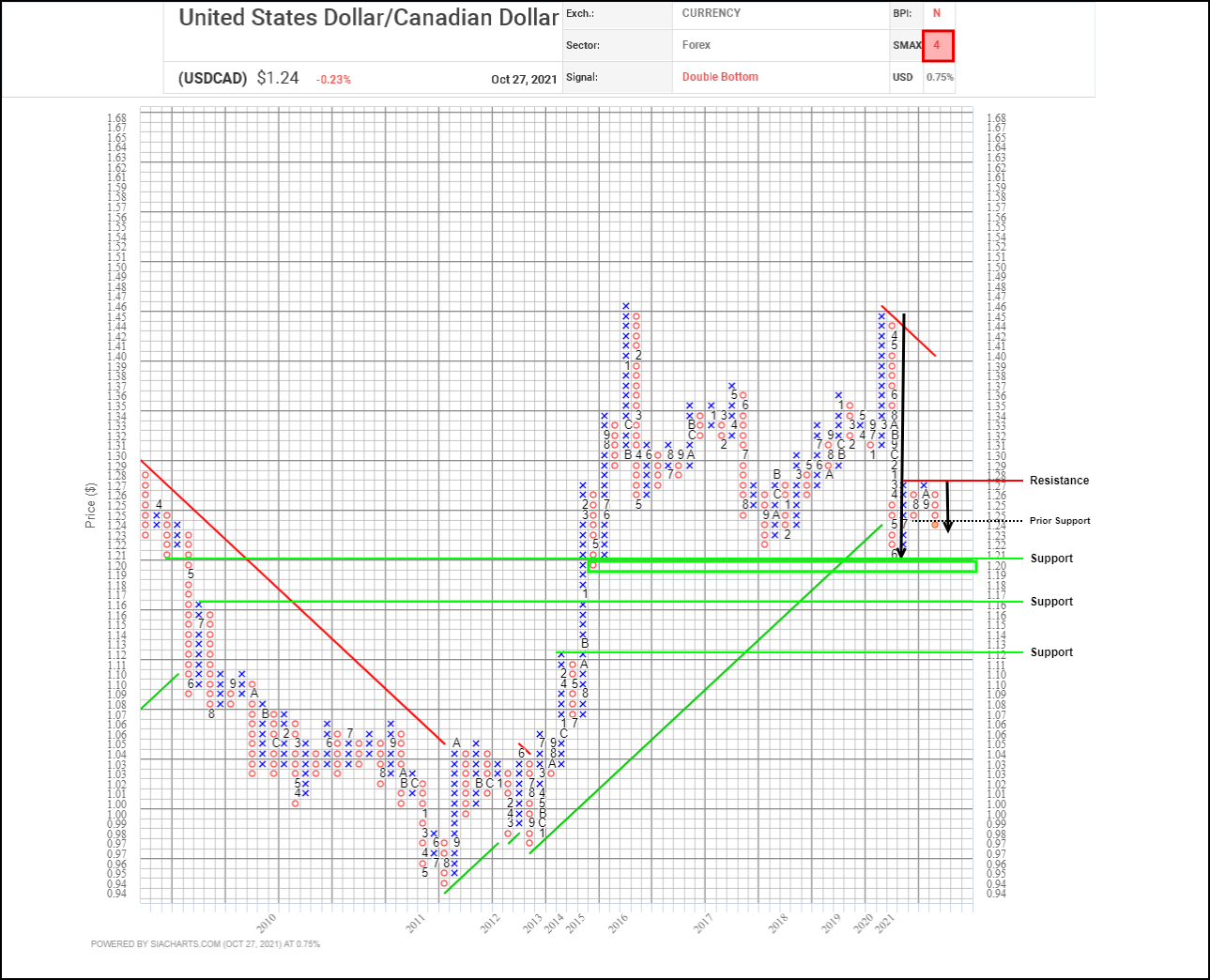 Changes in the US Dollar / Canadian Dollar exchange rate can have significant implications for Canadian investors. For Canadians investing in US equities, an increase in the value of the Canadian Dollar (Falling USDCAD) can depress their USD returns when translated back to CAD. A rise in the value of CAD also can impact capital flows and the SIA Asset Class rankings, increasing the relative value of Canadian equities relative to US equities, all else being equal. A fall in the Loonie relative to the Greenback could have the opposite effect.

Recent action has brought USDCAD to a key technical test and a potential turning point. There are two main factors driving USDCAD at the moment. First is the value of energy prices. As with the currencies of other large energy exporting nations, the Canadian Dollar tends over time to trend upward or downward with the price of oil. Energy prices have been on the rise recently with WTI crude oil reaching its highest level since 2014 and natural gas recently trading at its highest levels since 2008, both recently breaking out of long-term bases.

Second is the relative hawkishness and dovishness of the two central banks. The Bank of Canada has been more hawkish in its actions through 2021, tapering back its asset purchase program several times and now ending new purchases and shifting to maintaining its balance sheet while moving up its timetable for raising interest rates. Anticipation of yesterday’s hawkish announcements has also helped to propel CAD upward in recent days.

So far this year, the Fed has been relatively dovish, keeping its asset purchase program going full speed. Speculation that increasing inflation pressures could force the Fed to start tapering pushed the US Dollar upward for a while in the summer. Next week the Fed meets with investors expecting more clarity on whether or not tapering will start this year, how long it could take to end QE and when US interest rates may start to rise. A hawkish turn by the Fed could spark a relative rebound for the US Dollar.

Since peaking in March of 2020, USDCAD has been trending downward with the Canadian Dollar gaining in strength relative to the US Dollar. The pair bounced up toward $1.2800 over the summer as US treasury rates rose and speculation on US tapering became more serious. In recent weeks, the pair has turned back downward and recently completed a bearish Double Bottom pattern. Currently, USDCAD is testing a key technical support level near $1.2000 where a round number and the bottom of a long-term trading range align. A breakdown below $1.1900 would confirm the start of a new downtrend, with next potential support near $1.1600 and $1.1200 A bounce would confirm current support and potentially signal the start of an upswing within the current $1.2000 to $1.2800 trading range.