The turn of the calendar into November has brought equity markets into the most seasonally favorable time of the year, which runs more or less through April. Several senior indices in the US and Canada have reached new all-time highs and we have had two key breadth confirmations this week. First, continuing our discussions of Dow Theory from recent issues of the Equity Leaders Weekly, the Dow Transports have been soaring this week, and broke out to a new all-time high, signaling the start of a new advance, confirming a recent breakout by the Dow Industrials, and sending a bullish signal. Second, and perhaps more importantly, small and mid cap indices in the US have been breaking out, a bullish sign of increasing breadth and growing participation in the current market advance.

The Fed has officially joined the parade of central banks cutting back on stimulus announcing yesterday that it intends to reduce asset purchases by $15 billion per month, a pace that would see it run down and finish the current program in June of 2022. This timetable is in line with previous hints from the US central bank and has been seen by investors as a bullish sign of confidence in the economy.

In its statement, the Fed suggested it expects supply chain disruptions to ease over time and that it still sees recent inflation pressures as transitory. There is some potential evidence for this as several key commodities have turned downward in the last few days including Crude Oil, Copper, and Lumber. Part of this may be a reaction to a rising US Dollar, but the downturn may also be in response to recent signs of growth slowing in some sectors, particularly a recent decline in US construction spending.

Economic and earnings news continues to roll out over the rest of this week, then drops off dramatically next week, which could give investors and analysts a chance to catch their collective breath. Stagflation remains a key theme for economic numbers with US nonfarm payrolls and Canada employment numbers coming out tomorrow, followed by inflation reports for the US and China next week. Earnings season shifts into the later innings next week with the calendar dominated by smaller companies and headlined by Disney and a few retailers including Canadian Tire.

In this issue of Equity Leaders Weekly, we look at the Russell 2000 Index and the retailing sector as indicators of increasing market breadth, and accelerating accumulation. 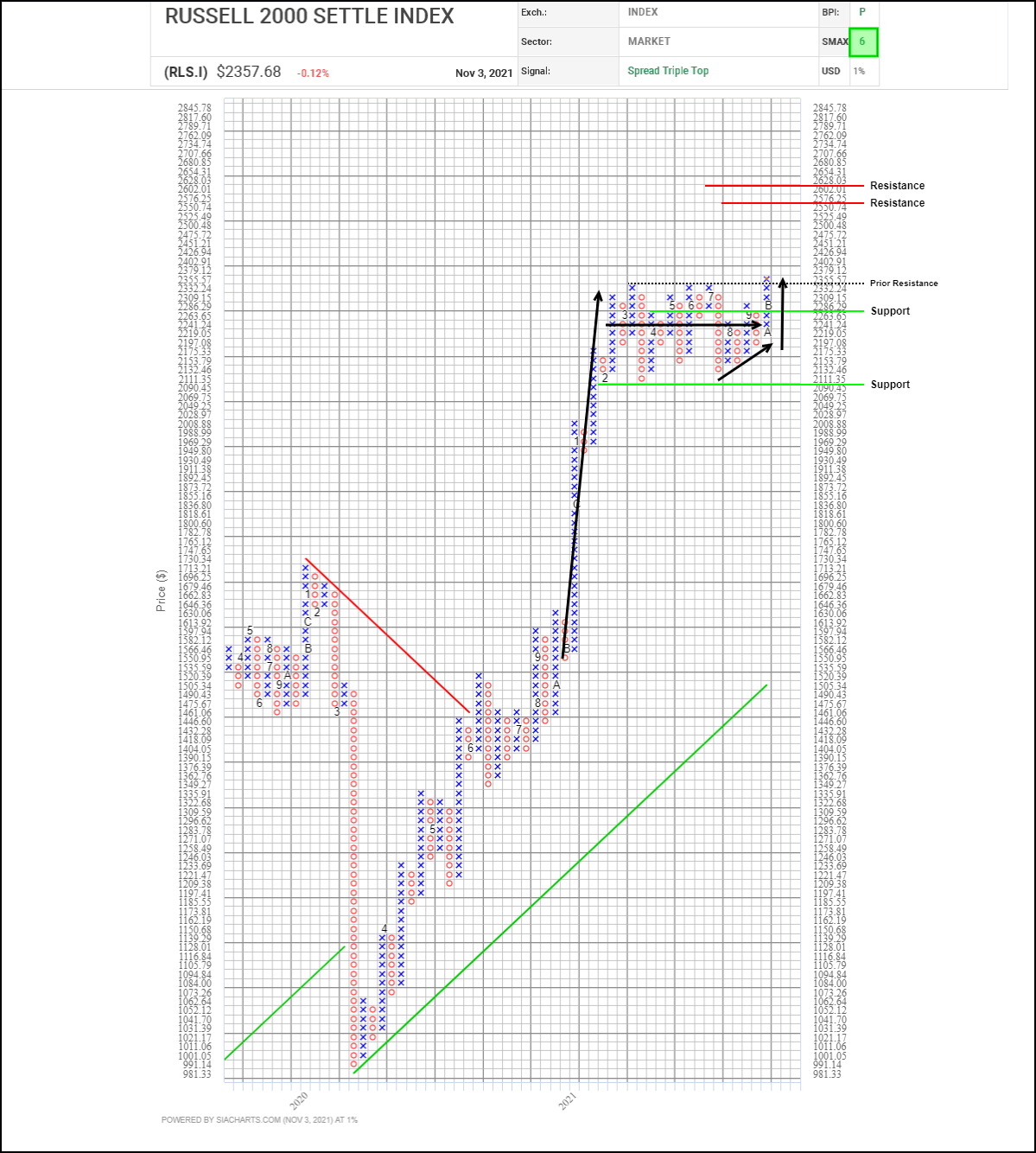 One of the best examples of how the stock market has been stuck in a sideways trend of rolling takedowns and rebounds has been the Russell 2000 Index, which has been range bound since March. The new highs made by the Dow Industrials and the S&P 500 in October were encouraging but questionable due to their sensitivity to a small number of high priced and/or large cap stocks.

This week’s breakout by the Russell 2000 Index (RLS.I) is a clear signal that a new market advance has started with investors prepared to move down the chain and take on risk buying small cap stocks. This wider participation also provides clear confirmation that the consolidation phase of the last 6-8 months is over and that the larger bull market which started in March of 2020 has resumed.

RLS.I started this year in rally mode but after peaking in March, has spent the last eight months trending sideways in consolidation mode between 2100 and 2350. A major breakout is underway this week with the Index breaking through 2355 to a new all time high, completing a rare and very bullish Spread Quadruple Top pattern and signaling the start of a new advance. Initial upside resistance appears near the 2500 round number, followed by 2576 and 2628 based on horizontal counts. Initial support appears near 2263 based on a 3-box reversal.

November has the potential to be a make-or-break month for the US retailing sector. The sector has started to attract renewed interest already with meme retailers like Gamestop and Bed, Bath & Beyond starting to surge on positive news this week. This month is earnings season for retailers with quarters that ended in October (ie most of them), and not only will investors be considering the results, but also holiday season guidance and the potential impact of supply chain disruptions on the sector recovery. Speculation could get trumped by reality at the end of the month when Black Friday/Cyber Monday sales events (the busiest shopping days of the year in the US) give us a better idea about consumer sentiment this year and retailers ability to meet demand.

Since June, the SPDR S&P Retail ETF (XRT) has been stuck in a sideways trading range, digesting gains made earlier in the year and enabling fundamentals to catch up to valuations. Yesterday, XRT broke out to a new all-time high above $100.00, completing a bullish Spread Quadruple Top pattern and confirming a bullish Spread Triple Top pattern that called off a short-lived previous spread quadruple bottom breakdown. This strong upturn that resistance has been overcome, underlying accumulation has resumed, and a new advance has started.

Based on horizontal counts, next potential upside resistance for XRT appears near $104.20 and $110.55 on trend. Initial support appears near $96.20 based on a 3-box reversal.