Equity markets, which started the week rallying to new all-time highs, have started to slip back a bit due to a combination of factors, including profit-taking, a reluctance to take new action around today’s Remembrance Day holiday, and investors pausing to reflect on their portfolios with earnings season winding down and a quieter week for economic and business news.

The main factor driving markets this week, however, appears to be a change in investor attitudes toward inflation. Consumer price numbers released yesterday from the US and China indicate that inflation not only is Not Transitory, despite what central bankers have been preaching, but in fact is increasing even more than the street had anticipated.

Yesterday, this sparked significant capital movement across asset classes. US traded interest rates rose on expectation that rising inflation could force central banks to cut back on stimulus faster or move up their timetables for interest rate increases. The US Dollar rallied yesterday on higher traded rates and precious metals took off as their roles as inflation hedges came back to the forefront. The rising US Dollar and inflation fears weighted on commodity prices and cut some of the wind from stocks’ sails as well.

Looking ahead to the coming week, inflation may remain a hot topic of conversation with consumer, housing, retail and producer price reports on the way from the US, Canada and the UK. Retail sales, which we discussed in last week’s issue of the Equity Leaders Weekly, is also likely to be in the spotlight with monthly sales numbers due for the US, China, Canada and the UK, and with earnings from major North American retailers on the way starting with Canadian Tire this week, and leading into reports from Wal-Mart, Home Depot, Macys, Loblaws, and many others over the course of next week.

In this issue of Equity Leaders Weekly, we look at major breakouts for Gold and other precious metals, and take a monthly look at what the sector scopes are telling us about equity market sentiment and capital flows. 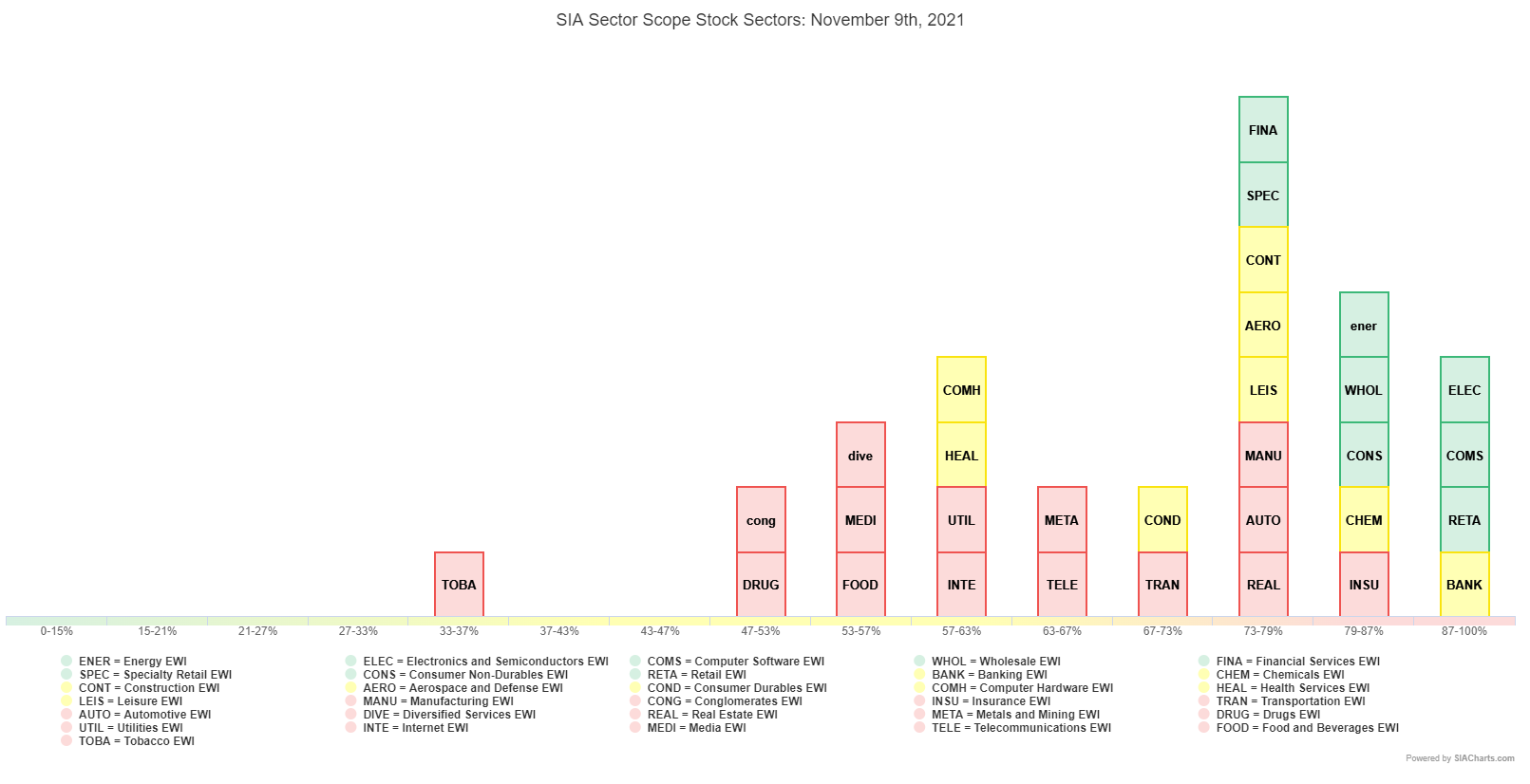 The Sector Scopes feature in SIA Charts, found in the Markets – BPI section, provides investors with a snapshot of the bullish percent (percentage of stocks in a group on a bullish charting signal) for 31 industry groups. This provides us not only with a indication of market sentiment at a point in time, but also a visual way to evaluate changes in attitudes and capital flows between groups over time.Currently, the BPI chart shows the majority of equity market sectors piled up on the right-hand side of the chart. This is indicative of a rising and perhaps slightly overbought market. A month ago, the majority of sectors were in the center-left of the chart, a neutral to slightly bearish position.

Banks and energy have remained among the strongest sectors over the last month. Sectors staging the strongest rightward moves over the last month come from a broad range of groups including retail, electronics & semiconductors, computer software, and chemicals. The leftmost, underperforming groups currently tend to be concentrated in defensive areas including tobacco, food, conglomerates and drugs 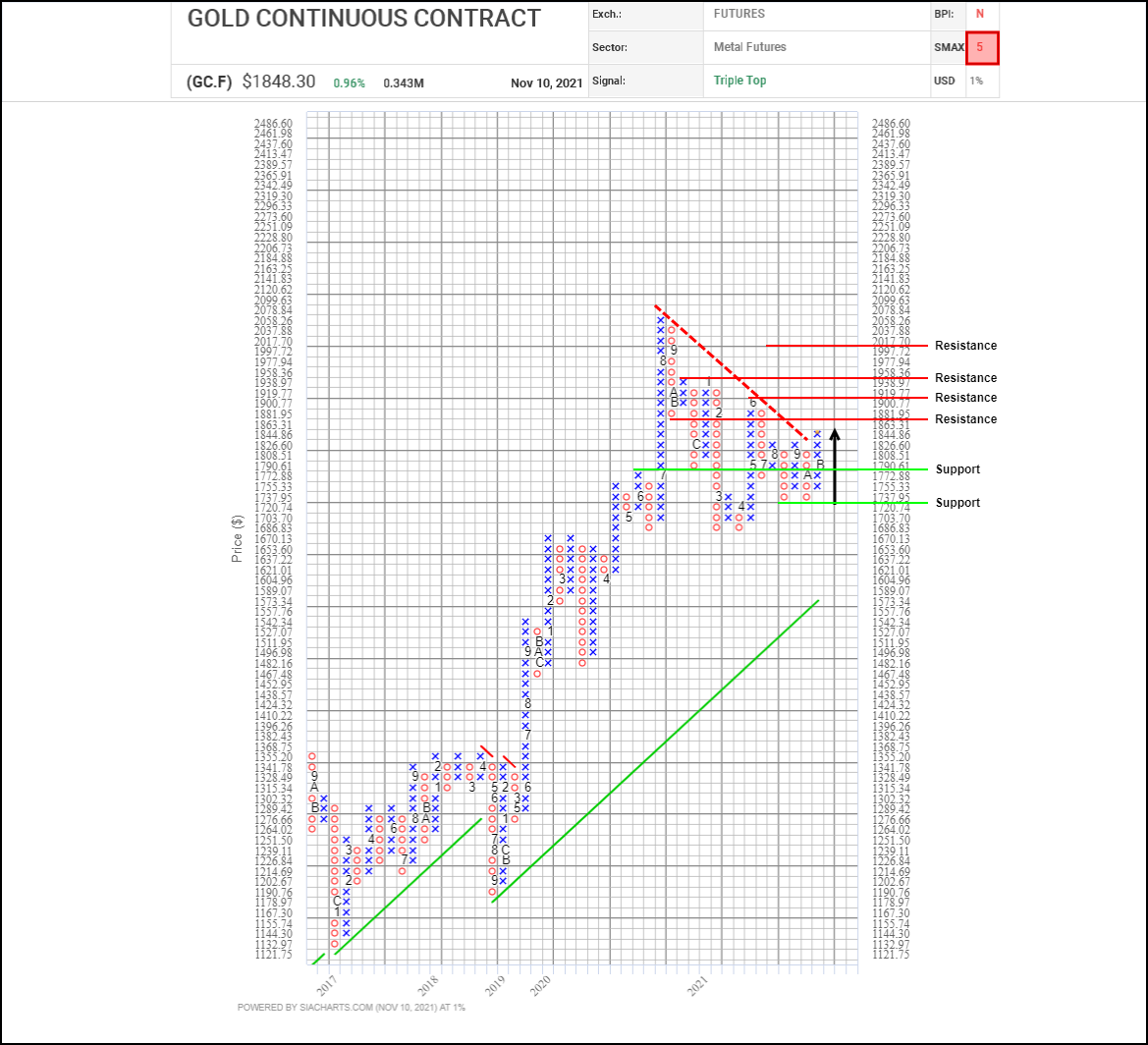 As the world’s premiere hard currency, gold has long played a role as a store of value. While its presence as a haven during times of market stress and financial fear is well known, gold also has historically played a role as a store of value in times of rising inflation, when the value of paper money gets eroded. Silver and platinum, meanwhile, have sometimes historically traded with gold and sometimes with base metals depending on whether investors are more interested in their financial/jewellery applications or their commercial/industrial applications.

Gold (GC.F) and other precious metals drifted sideways through the summer as the prices of several commodities including copper and lumber fell back, suggesting that commodity related inflation could be transitory and easing fears a bit. Recently, however, concerns about inflation have started to rise again, this time in relation to increasing oil & gas prices, rising wages and the impact of supply chain disruptions on the supply and price of goods, the latter two potentially being more persistent and less transitory.

Gold and platinum also snapped downtrend lines yesterday, further confirming the significance of this week’s upturn. Previous column highs and lows suggest potential upside resistance for gold could appear near $1,881,95, $1,919.75 or $1958.40 on trend. A horizontal count suggests the yellow metal could potentially challenge the $2,000/oz round number once again. Initial support appears near $1,772,90 based on a 3-box reversal.