It has been a tumultuous week for equity markets with several large intraday swings indicating a volatile environment. The prospect of interest rate increases in both the US and Canada, with both the Fed and the Bank of Canada hinting that they could start raising rates at their next meetings in March, sent investors fleeing from risk markets into defensive havens.

In this environment, capital continued to rotate out of technology/momentum stocks, and cryptocurrencies with several markets staging significant breakdowns including the S&P 500, the Russell 2000, and Bitcoin. On the other hand, capital moved back into gold, the Japanese Yen and defensive US Dollar assets.

Earnings season continues and while results and the market reaction to them have generally been better than last weeks disappointments and selected massive plunges in stocks like Netflix and Peloton, overall, investor sentiment remains skittish with investors nervous about when or where the next shoe could drop.

The coming week brings us through the peak of earnings season for large cap US stocks tonight with the focus on Big Tech, Big Oil and Big Pharma. Headliners include Apple and Visa tonight, Chevron and Caterpillar tomorrow, Exxon on Tuesday and Alphabet and Meta (Google and Facebook) next Wednesday. Big Oil earnings in Canada (Imperial and Suncor) start later next week.

The coming week also brings the turn of the month and a number of economic reports, with investors likely to continue weighing indicators on the health of the economy versus indicators highlighting inflation pressures. Today for example, the decision was split between stronger than expected US Q4 GDP (6.9% vs street 5.5%), and higher than expected US Q4 GDP price inflation (7.0% vs street 6.0%).

In this issue of Equity Leaders Weekly, we take a look at the implications of a breakdown by the Russell 2000, and at the recent rise in US traded interest rates. 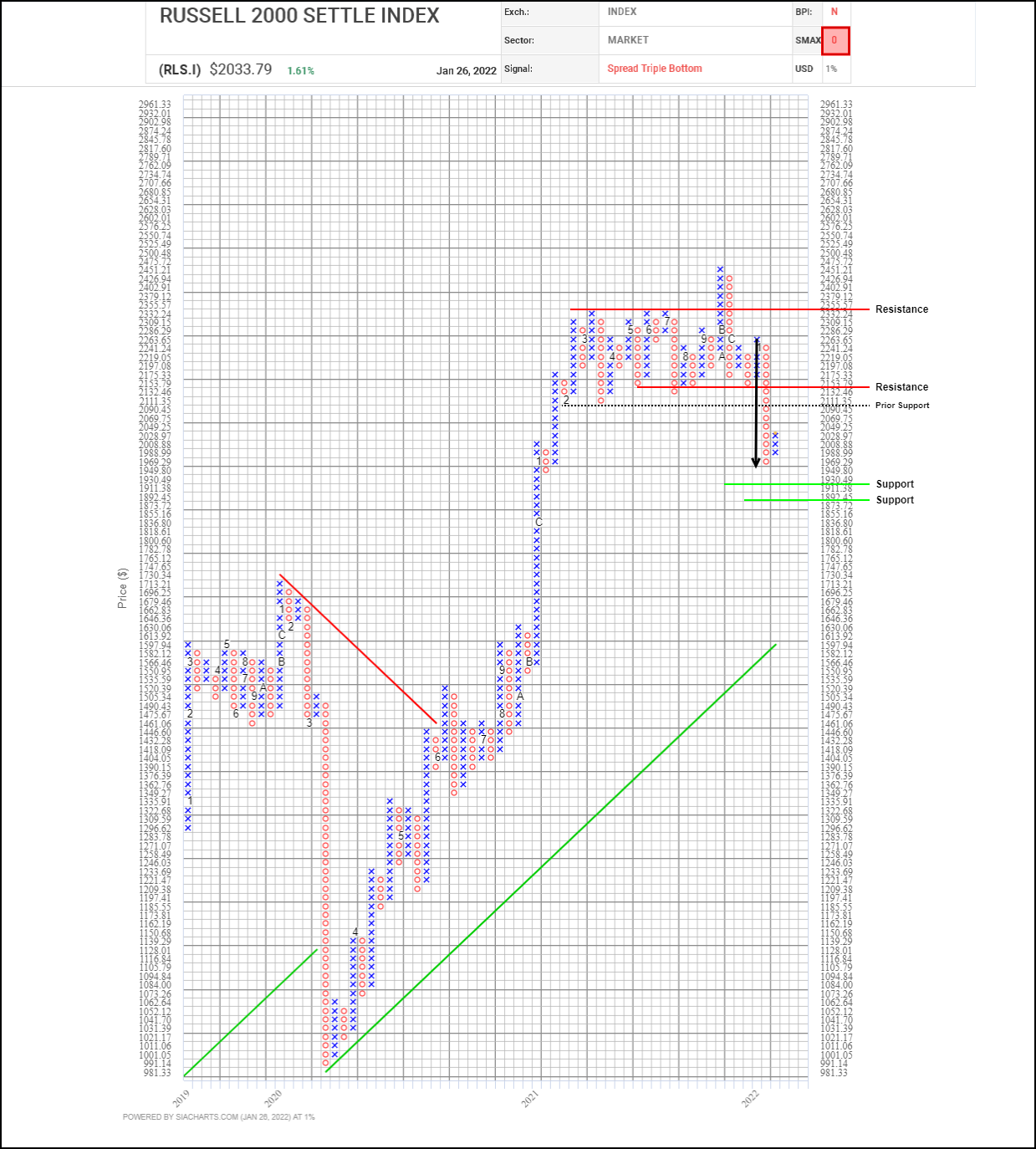 has been a key indicator of market breadth and direction for over a year now. In late 2020, the Russell breaking out to a new high and soaring form there confirmed previous breakouts by larger cap US indices like the NASDAQ, S&P 500 and S&P 100. In March of 2021 the Russell ran out of gas and became the standard-bearer of the broad sideways market that persisted through the rest of 2021 for the majority of stocks outside of a few big cap names.In November, things were looking good for the Russell 2000 as it broke out to a new high but this turned out to be a false breakout as the market quickly reversed back into its previous range in the November Thanksgiving Weekend crackup.This month, the Russell 2000 (RLS.I) has confirmed its previous bearish reversal by falling through the bottom of its previous sideways range near 2,130 and then plunging down toward 2000. A bearish Spread Triple Bottom pattern and a bearish Low Pole are currently active and it would take a rebound back up into the 2,130 to 2,150 area for investors to even think about calling them off. Next potential downside support appears in the 1,875 to 1,915 zone based on vertical and horizontal counts. 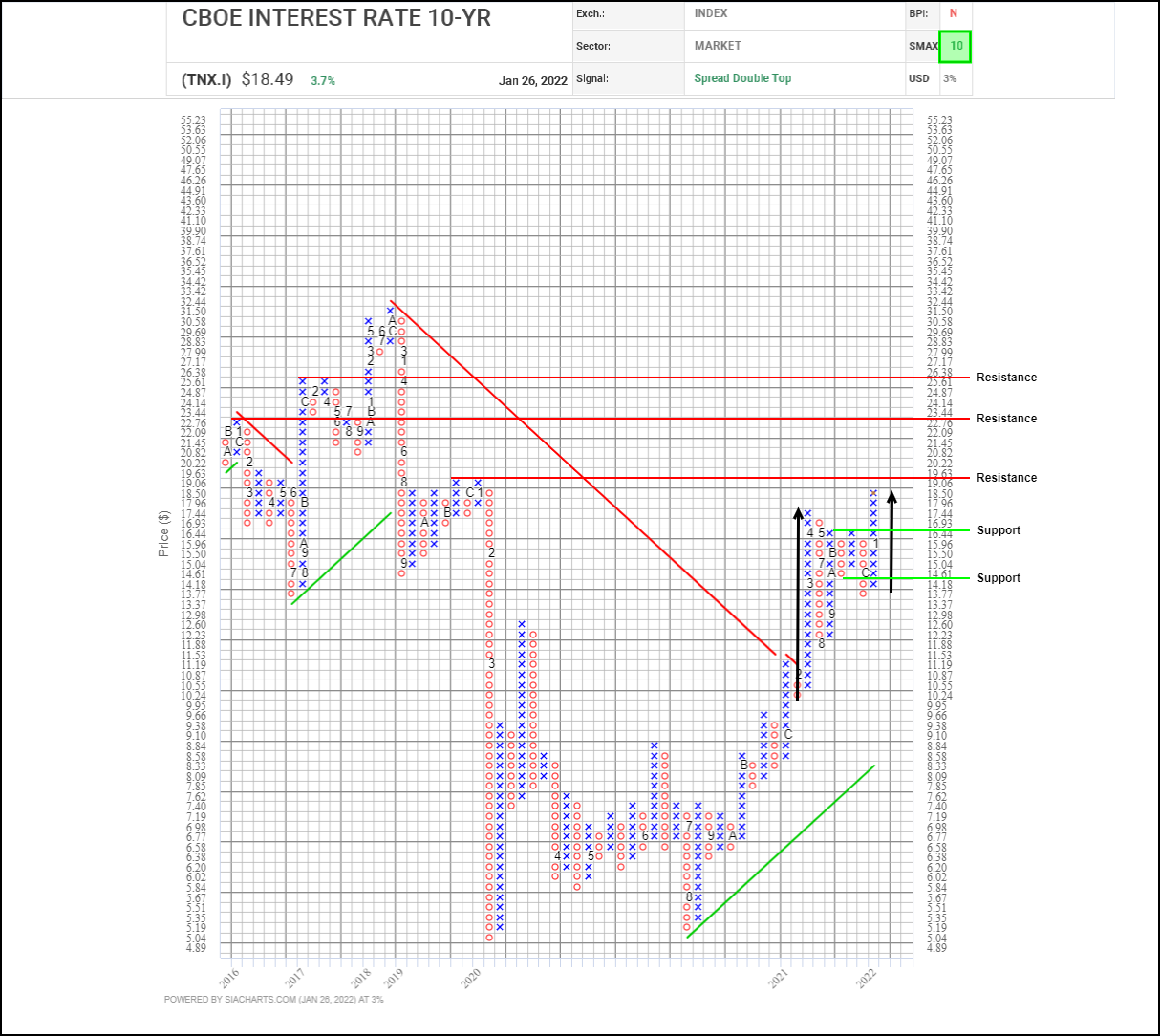 One of the reasons that stock markets have come under pressure previously and lately is the rise in US traded interest rates, the CBOE 10-year interest rate (TNX.I) for example. Much of the cheap, easy stimulus money unleased over the last two years has found its way into stocks and other trading markets like cryptocurrencies.

With stimulus programs ending and the cost of borrowing money about to climb as central banks raise interest rates, it comes as no surprise that investor enthusiasm for risk has faded. TNX.I can be seen as an indicator of where investors think interest rates are heading in the coming years and significant changes appear to coincide with changes in stock market trends as well.

Last year, the downshift in trend for the Russell 2000 and many stocks outside of the mega caps coincided with a spike in TNX.I rom near 1.00% toward 1.75%. This month, TNX.I has broken out again, completing bullish Triple Top and Spread Double Top breakouts and launching toward 1.90%, its highest levels since late 2019. This spike has coincided with the recent breakdown by RLS.I highlighted earlier.

The next key psychological test for TNX.I appears near the 2.00% round number, which is also the long-term inflation/interest rate target for many central banks, after that resistance appears in the 2.25% to 2.35% range.