Stock markets around the world have continued to retreat with major US indices falling back to levels not seen since last summer. Increasing tensions and the spiral into the open war between Russia and Ukraine which started overnight have been centre stage, pushing pretty much everything else into the background. Capital has continued to flow into commodities, with WTI crude oil rallying toward $100.00/bbl, and Brent Crude approaching $105.00/bbl.

Capital also continues to flow into defensive havens. This can be seen most clearly in recent gains for Gold with the price rising above $1,900/oz relative to cryptocurrencies like Bitcoin, which has dropped back under $40.000. Strong demand for US bonds as a haven has pushed the US Dollar up, US bond prices up and US treasury yields down even in the face of potential interest rate increases.

Central banks remain under pressure from inflation to start, continue or accelerate interest rate increases. This week the Reserve Bank of New Zealand raised its benchmark interest rate by another 0.25% again this time to 1.00%. The Bank of Canada, which meets March 2nd and the US Federal Reserve Board, which meets March 15-16 have both hinted interest rate increases are potentially on the way with the biggest questions being when and by how much? The coming week brings earnings reports from the big Canadian banks, which may indicate how much of an impact recent Omicron related restrictions and choppy markets have had on the economy and bank results. Results also continue to come out from US retailers and a smattering from other sectors. Results from Zoom and AMC Theaters next week may indicate how stay-at-home companies are faring these days relative to reopening plays.

February has flown by incredibly fast and ends on Monday. The turn into March brings the usually flurry of monthly economic indicators including manufacturing/service PMI numbers, US employment reports and some inflation numbers. Investors may continue to assess reports in terms of what they tell us about inflation more than the economy and what they mean for the future of monetary policy.

In this issue of Equity Leaders Weekly, we look at recent breakdown by US indices as the current downswing deepens, and at the eternal tug-of-war battle between Growth and Value. 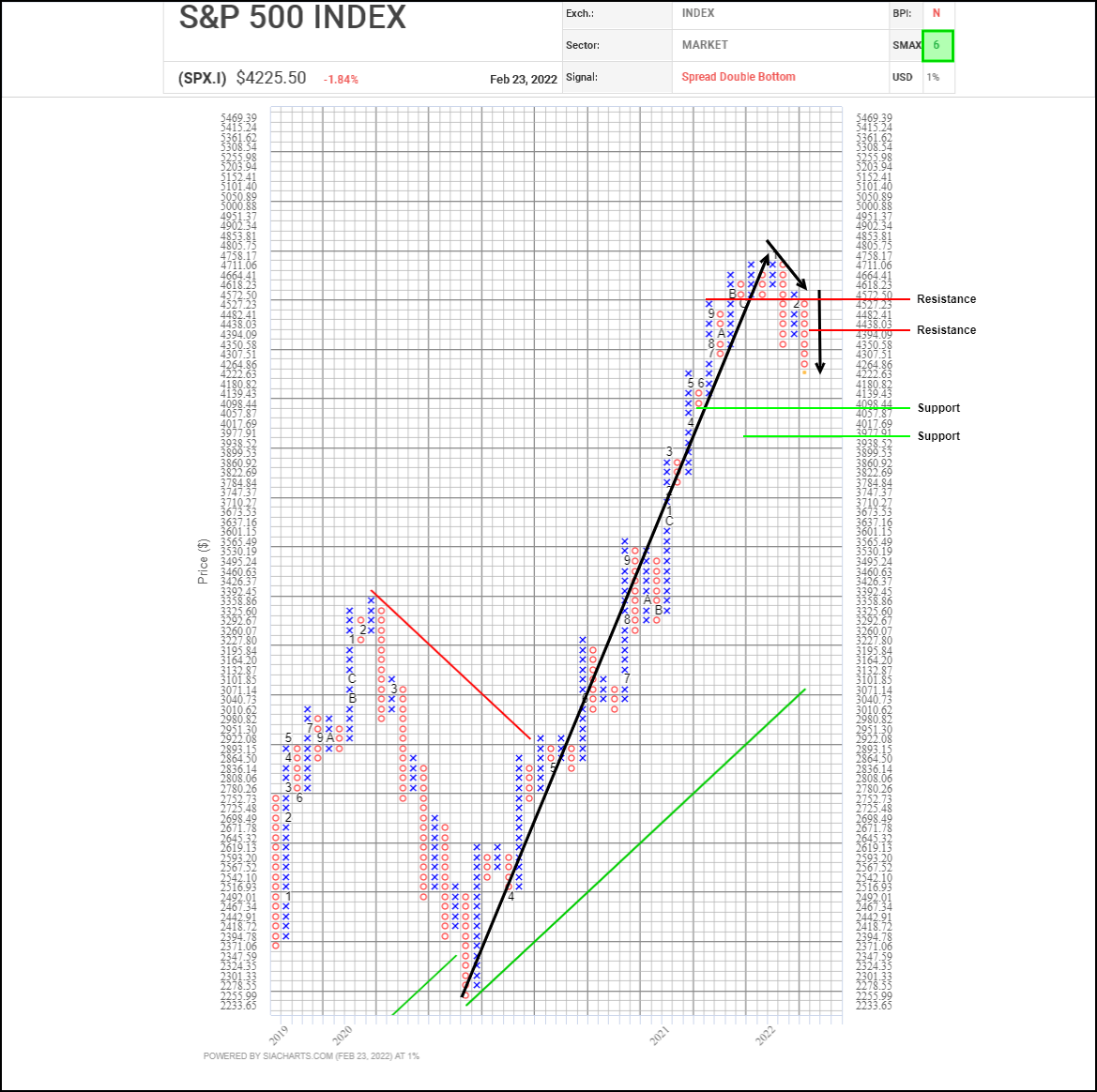 Recent trading in the S&P 500 (SPX.I), shows how sentiment in equity markets has swung from bullish to bearish since the start of this year. The S&P 500 Index had been consistently trending upward from the March 2020 market bottom through to an all-time high in early January.Over the last month or so, however, the technical picture has changed dramatically. A one-row breakout failed and the shares completed a bearish Double Bottom pattern in January. This month, a rebound attempt triggered a low pole warning but then faltered as well as bears regained the upper hand. This week, SPX.I has completed bearish Double Bottom and Spread Double Bottom breakdowns and fallen to its lowest level since last July, confirming that US stocks have come under distribution and that a new downleg has started.

Next potential support for SPX.I may appear near 4057 based on a previous column low, the 4,000 round number, or 3940 based on a horizontal count. Initial resistance appears near 4440 based on a 3-box reversal. 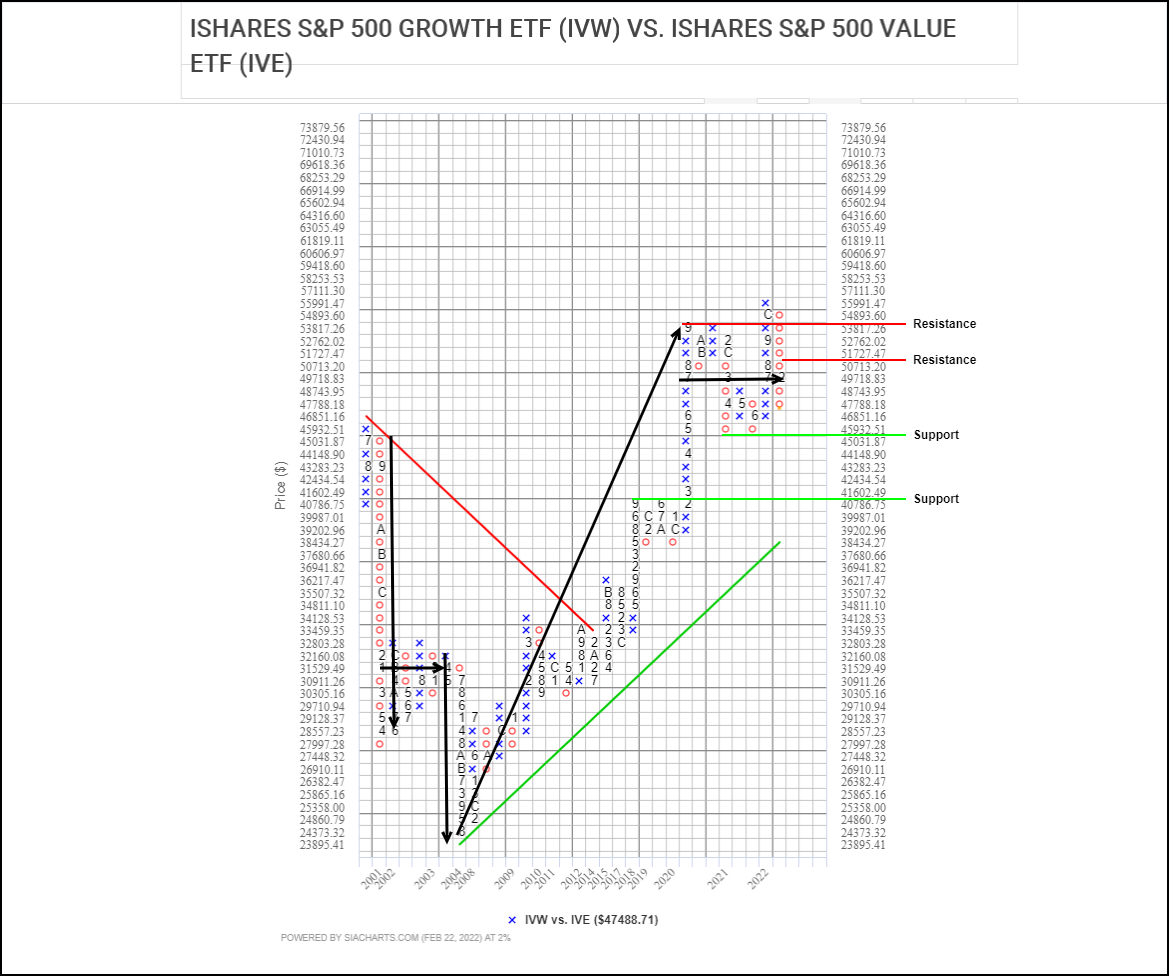 Although equities have generally been in retreat, the relative performance between groups and indices has varied dramatically. The technology/communications, growth/momentum stock sensitive NASDAQ Composite has been crushed, falling 16.6% so far, while the S&P 500 is down 11.3%. In contrast the value/broad-based Dow Jones Industrial Average and the NYSE Composite Index are down 8.8% and 6.6% respectively.

With the performance of gold and other safe haven assets picking up, it appears we may be near a tipping point in the ongoing struggle from domination between the growth and value philosophies of investing.

This 2% chart of the ratio between the iShares S&P 500 Growth ETF (IVW) and the iShares S&P 500 Value ETF (IVE) shows that for nearly all of the last twenty years, Growth has dominated and outperformed relative to value. The two times where Value outperformed was in the 2000-2002 and 2007-2009 bear markets. Since the end of 2020, except for a short throwover late last year that may have been the climax of the Growth outperformance trend, Growth and Value have been in balance, but in the last few weeks, the ratio has turned downward suggesting that Value may be starting to regain the upper hand.

In fact, year to date, IVW is down 16.5% while IVE is down 5.1%. Also, on the 1% chart, the Growth versus Value comparison has already broken down, completing a bearish Triple Bottom last month, a bearish Double Bottom this month, and testing a long-term 45-degree support line.A break down below 45,000 on the 2% chart would complete a bearish Triple Bottom breakdown and confirm that the trend has turned in favor of Value.