It has been another wild week for world markets with big swings and sea changes in sentiment taking place. The overriding fears that the continuing war in Ukraine could lead to supply shortages stoked big rallies on commodity prices late last week, but these were suddenly reversed when new COVID lockdowns in China sparked fears of new supply chain problems and demand shortfalls. The biggest moves were seen in Energy and metals contracts, while grains, a market where Ukraine itself is a big producer, remain elevated.

It has also been an active week for overseas indices. Chinese markets plunged to start the week on the COVID lockdown news but bounced back after the government pledged support for the financial system and its stocks listed in international markets. We may hear more in the coming days with the PBOC meeting Sunday night. European markets remained under pressure with the war still raging but indices in Poland, Germany, and elsewhere briefly started to stabilize on reports of progress at peace talks but have turned back downward this morning. Both the Ukraine and China situations remain fluid and volatile.

Yesterday’s US Fed decision and statement came in even more hawkish than expected. The US central bank raised interest rates by 0.25% and published projections suggest that most members are expecting hikes of at least 0.25% at every one of the six remaining meetings this year, with increases possible into 2023. The Fed also joined the Bank of Canada in starting to talk about shrinking its balance sheet sometime soon. US markets had tried to bounce back earlier in the week, but then turned back downward again following the Fed decision. This morning, the Bank of England raised its benchmark interest rate for the third meeting in a row, a 0.25% increase to 0.75%.

The coming week is light for economic data and earnings reports, so investor focus appears set to remain fixated on the main themes of war in Europe, economic disruptions, and central bank tightening. The Bank of England meets this morning, and the Bank of Japan meets tonight.

In this issue of Equity Leaders Weekly, we take our monthly look at the implications of rising US interest rates and an interesting divergence by the Dow Transports. 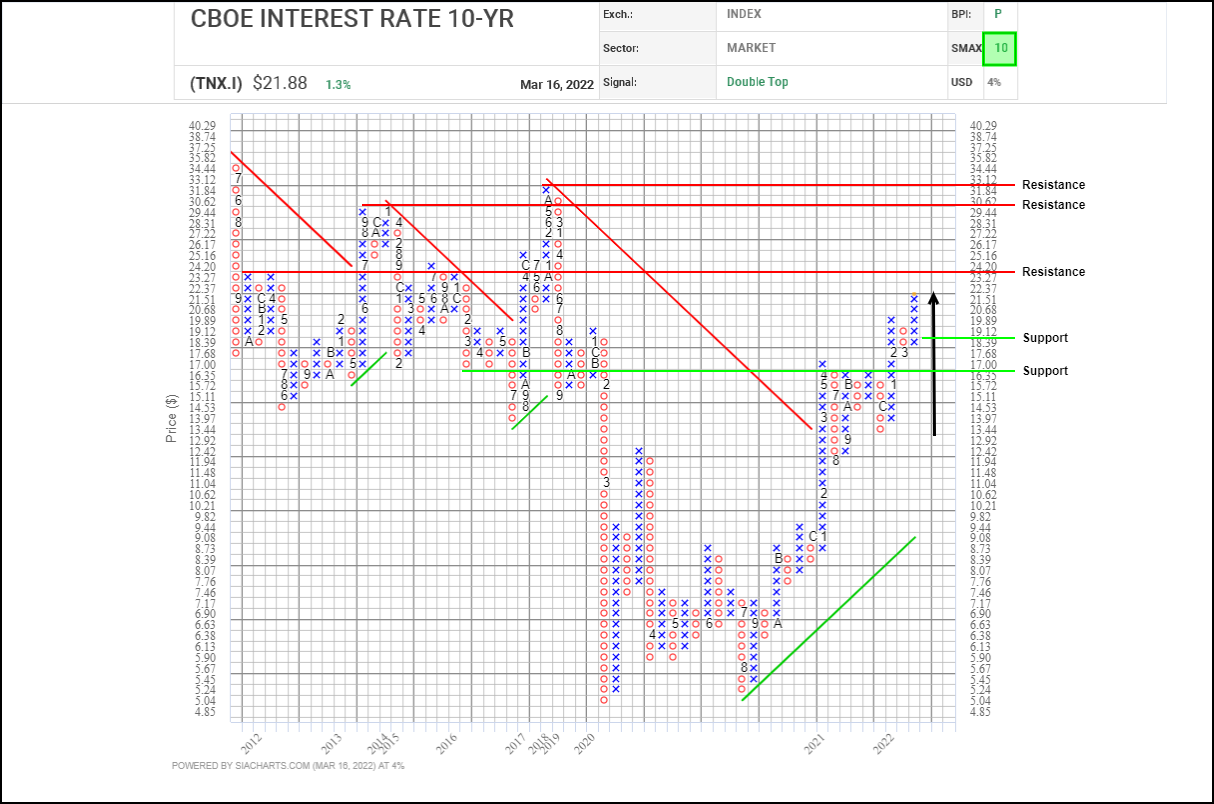 The traded US 10-year interest rate (TNX.I) is seen by many investors as a key economic and market indicator, a crucible where expectations about the economy, inflation and monetary policy collide.

Back in early 2020, TNX.I plunged as the pandemic shut down the world economy and central banks unleased massive co-ordinated stimulus. By early 2021 as the economy was getting back up on its feet, TNX.I started to bounce back toward neutrality (many central banks have a 2.00% interest rate and 2.00% inflation as their long-term goal) on speculation that stimulus would eventually end.This year, TNX.I has climbed up above 2.00% reflecting a surge in inflation and growing expectations that central banks may need to tighten monetary policy to get inflation back under control. Yesterday, TNX.I rallied to its highest level since 2018 following the Fed’s rate hike and hawkish projections.

Based on a convergence of vertical and horizontal counts with previous column highs and lows, potential upside resistance for TNX.I could appear near 2.4%, the 3.0% round number, or the 2018 peak near 3.3%. 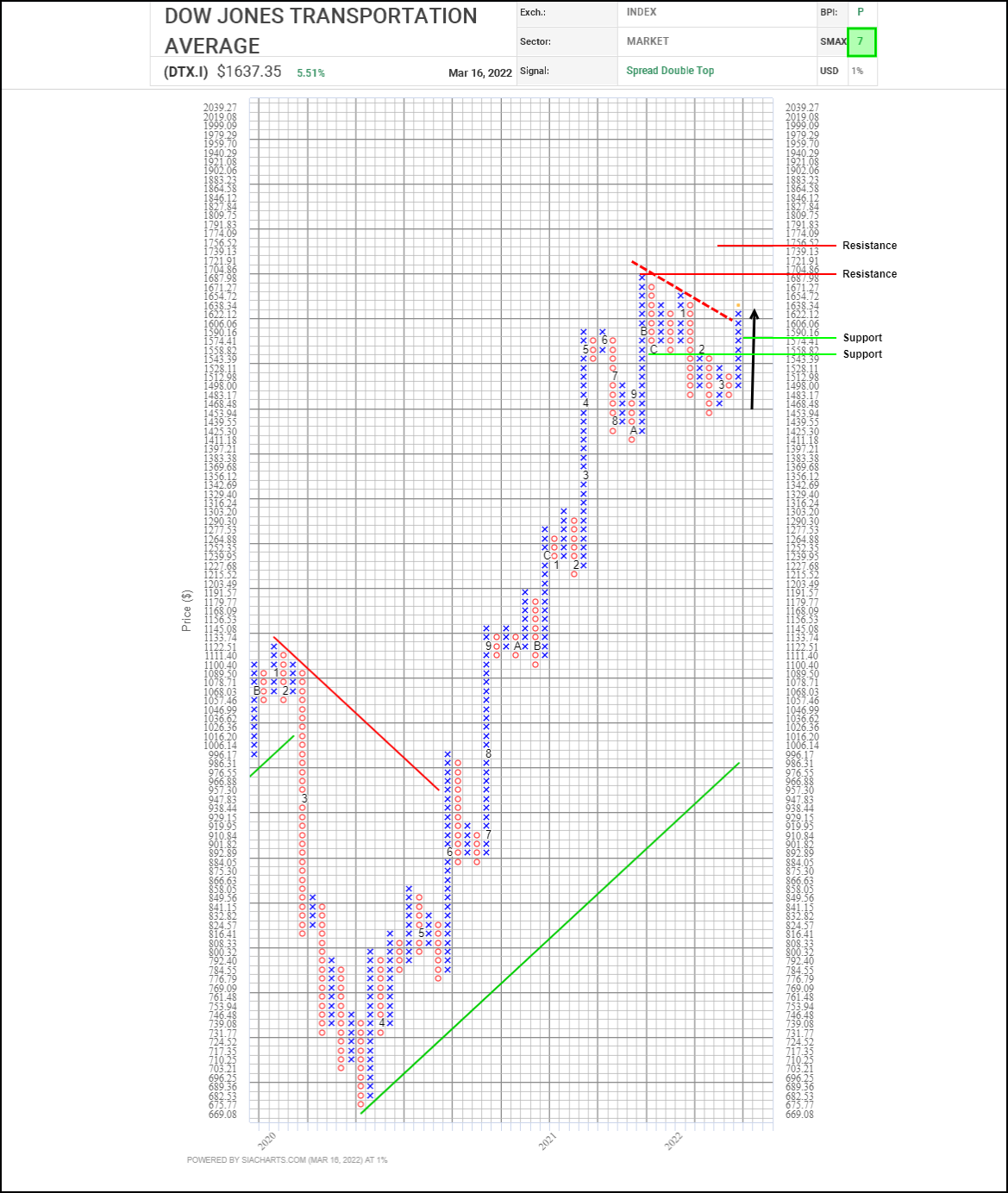 The importance of comparing trends in the Dow Jones Transportation Average (DTX.I) relative to the Dow Jones Industrial Average (DJI.I) dates back over a century to the writings of Charles Dow. Dow indicated that the two indices should confirm each other and that divergences (or non-confirmations) can be a signal of potential turning points in the market.

When looking at US indices to write about for today’s edition of the Equity Leaders Weekly, we saw several US indices including the Dow Industrials, NASDAQ, S&P 500 and others on bearish patterns and trending downward with two notable exceptions. The Russell 2000 (RLS.I) appears to be stabilizing in a lower range, and the Dow Transports have broken ranks and turned back upward.

Based on recent trading action, it appears that with the pandemic coming to an end, US airlines have started to attract renewed interest on their potential to bounce back from previously depressed industry conditions. The falling energy prices of the last few days may also provide a general boost to transport companies (ease the recent spike in fuel costs), but it’s too early to say on that one.

From November to February, the Dow Transports were under distribution, falling with other indices but since the beginning of March, DTX.I has gone its own way. This month, a new uptrend of higher lows has emerged, the index has completed bullish Double Top and Spread Double Top breakouts and snapped a downtrend line.

Next potential upside resistance appears at the November peak near 1,705, followed by 1,755 based on a horizontal count. Initial support appears near 1,575 based on a 3-box reversal.