The rebound in US and European stock markets which started tentatively last week has accelerated this week. With peace talks between Russia and Ukraine continuing, some of the darkest fears which had gripped markets through February and the first part of March have eased a bit, enabling some of the more depressed areas within equities to rebound including European indices, small caps, and technology/communications stocks.

Easing fears about the potential implications on resource supply from the Ukraine War, and growing concerns about the potential for decreased resource demand as China COVID lockdowns increase again, knocked several commodity markets for a loop this week, particularly in the energy, metals and grains groups which had a follow-through impact on the Energy and Materials sectors in world stock markets.

Although the latest wave of fear appears to be receding for now, the prospect that high inflation could force central banks around the world to accelerate interest rate hikes and shrink their balance sheet continues to weigh over markets and could limit near term upside. The US 10-year treasury note yield continues to climb and approached 2.40% recently, its highest level since 2019. As a result, the homebuilding sector, for example, failed to participate in the market rebound and remained on its downward trajectory.

The coming week brings more economic news than we have seen in a while. March wraps up today with and OPEC+ meeting and some US inflation plus regional PMI numbers. April kicks off tomorrow with US nonfarm payrolls and manufacturing PMI reports from around the world. Monday night, Australia’s central bank is meeting and Tuesday brings service PMI reports.

It’s a light week for scheduled earnings reports but confession season starts so it could be interesting to see if there are any early signs of whether the general business environment in Q1 was a volatile as the market environment or if rising inflation has impacted corporate earnings.

In last week’s issue of Equity Leaders Weekly, we looked at the turnaround in US small cap stocks. This week, we investigate the resurgence in European Indices, particularly Germany and at the NASDAQ as an example of renewed interest US momentum/growth sectors plays. 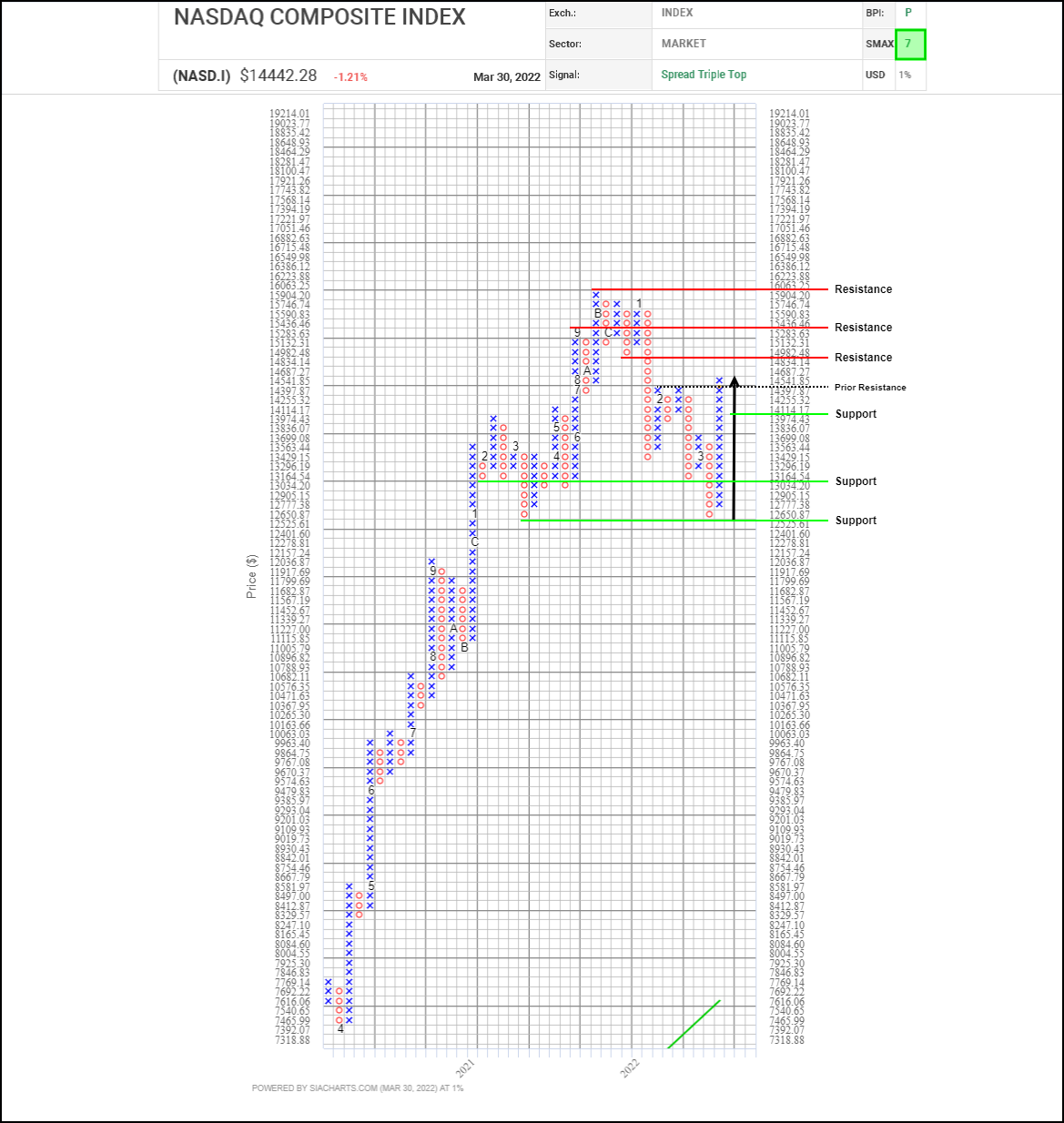 Earlier this year, the NASDAQ (NASD.I), with its higher weighting and greater sensitivity to growth stocks and momentum sectors such as Technology and Communications was particularly impacted by the downturn in equities relative to its peers. With some of the downward pressure easing, the NASDAQ has staged a strong rebound from previously depressed/oversold levels.

Earlier this month, the NASDAQ selloff was contained by support at a low set a year ago near 12,525. Since then, the index has surged back upward, completing a bullish Double Top and then a Spread Triple Top with a breakout over 14,540.

Next potential upside resistance tests appear at previous column highs and lows near appears near 14,980, 15,435, and 16,060. Initial support appears near 13,975 based on a 3-box reversal. With a bullish SMAX score of 7, NASD.I is exhibiting strength against the asset classes. 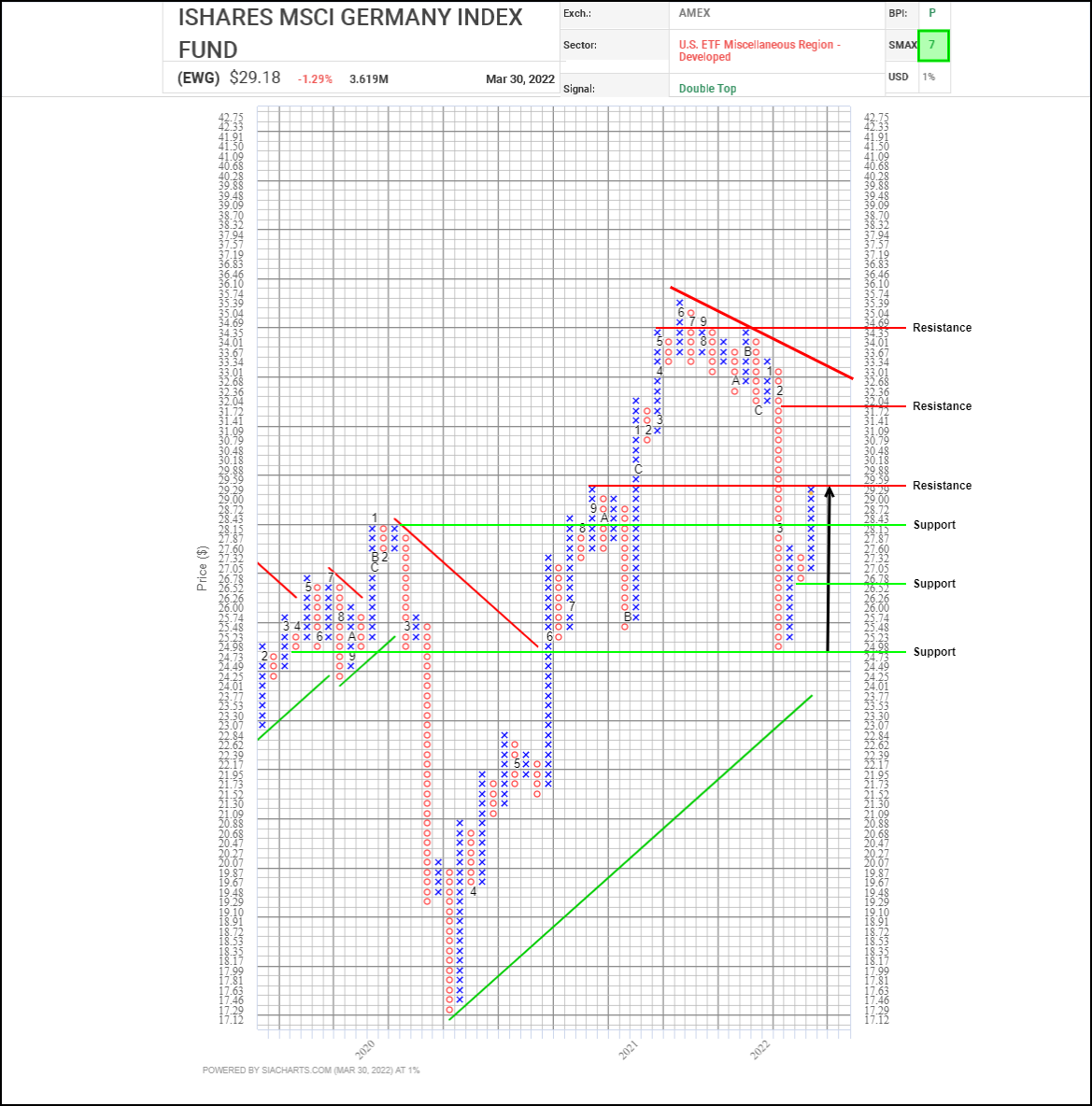 German equities (EWG) actually peaked back in June of 2021 and had been under steady distribution for eight months when the bottom fell out in February as war broke out in Europe. The ensuing selloff, exacerbated by Germany being caught in a tug of war between its NATO commitments and its dependence on Russian energy, took EWG down to levels last seen in June of 2020 before it finally bottomed out.

In recent weeks, EWG has started to rebound and completed a bullish Double Top. Currently is retesting resistance near $29.60 and still has quite a way to go before getting back to its breakdown point, let alone testing its downtrend line.

Initial resistance appears in the $32.00 to $33.00 area, where a horizontal count, previous column lows and a downtrend line cluster, followed by $34.70-$35.00 based on previous column high and a round number. Initial support appears near $28.15 based on a 3-box reversal.