The summer relief rally came to an abrupt end last Friday as Fed Chair Powell’s unfurling of his hawkish claws led market bears to bring their claws out as well, sending the Dow down to a 1,000 point one day loss last Friday. Market declines have extended into this week as investors have increasingly understood that the notion of a “dovish Fed pivot” next year was incorrect and that stagflation means that central banks may be unable to support the economy or markets in the coming years as they had in recent years due to their primary goal shifting to getting inflation back under control.

Central banks remain in the spotlight heading into September. Last week the focus was on the Fed, and while Chair Powell’s Friday speech captured most of the attention, a Saturday panel featuring central bankers from Europe and Asia suggested that hawkishness and inflation fighting is a global phenomenon. The coming week brings the first major central bank meetings since the US conference and the Fed’s Quantitative Tightening program doubles to $95B per month starting today.

The Bank of Canada stunned the market with a 1.00% increase to the overnight rate at its last meeting and is widely expected to keep raising rates although the pace may slow when it meets next Wednesday. The European Central Bank meets a week from today and has hinted that having raised interest rates for the first time since 2011 at its last meeting with a larger than expected 0.5% hike, the pace of increases could accelerate even more.

Earnings season went out on a low note with several Canadian banks reporting disappointing results due to a combination of falling capital markets revenues and rising loan loss provisions. Companies continue to announce layoffs, including social media company Snap who slashed its workforce by 20%. The coming week is pretty light for earnings with only a few notable reports from retailers including Lululemon today, plus Gamestop and Dollarama later next week. The financial and business struggles of meme retailer Bed Bath and Beyond may also continue to attract attention from traders.

With the calendar turning to September, we enter what has historically been one of the weakest and most volatile times of the year for stocks, potentially exacerbated this year by political and economic turmoil in many countries and the US midterm election campaign. The coming week brings a number of economic reports headlined by US nonfarm payrolls, Manufacturing and Service PMI numbers from around the world, and Chinese trade and inflation data.

In this edition of the Equity Leaders Weekly, we look at the impact of political tensions in Europe and Asia on the Uranium and Semiconductor sectors. 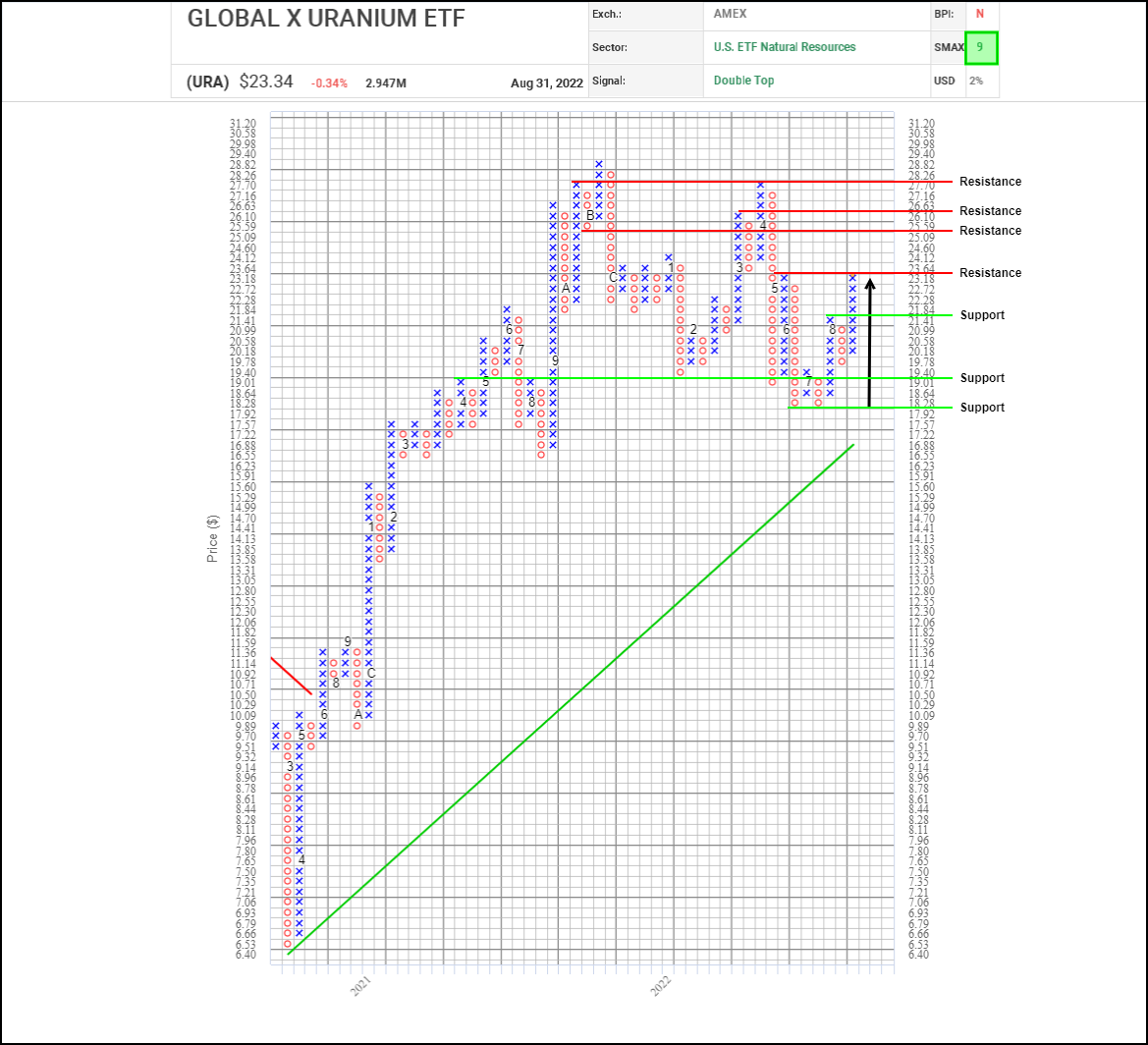 In last weeks edition of the Equity Leaders Weekly, we discussed the impact of sanctions related to the ongoing War in Ukraine has had on natural gas pricing. The related gas supply disruptions, including shutdown/slowdowns to key pipelines, have several countries in Europe and elsewhere not only worried about heating homes this winter, but also if they will be able to generate enough power through natural gas and other sources to keep industry going.

In the last few days, calls in Germany to stop the final planned shuttering of its nuclear plants and to ramp nuclear power generation back up, have grown louder, along with calls in Japan to restart some of their shuttered plants. This has raised speculation that demand for Uranium could increase moving forward, sparking renewed interest in Uranium producing stocks.

The Global X Uranium ETF (URA) bottomed out in July near $17.90 and has been on an upswing for over a month now, completing two bullish Double Top breakouts along the way. Currently, URA is bumping up against resistance near $23.65 where a breakout would complete a bullish spread double top pattern and confirm the start of a new uptrend.

On a breakout, next potential resistance appears in the $25.60 to $26.65 area where vertical/horizontal counts and previous column highs/lows cluster, then at previous resistance near $28.25. Initial support appears near $21.40 based on a 3-box reversal. With a bullish SMAX score of 9, URA is exhibiting strength against the asset classes. 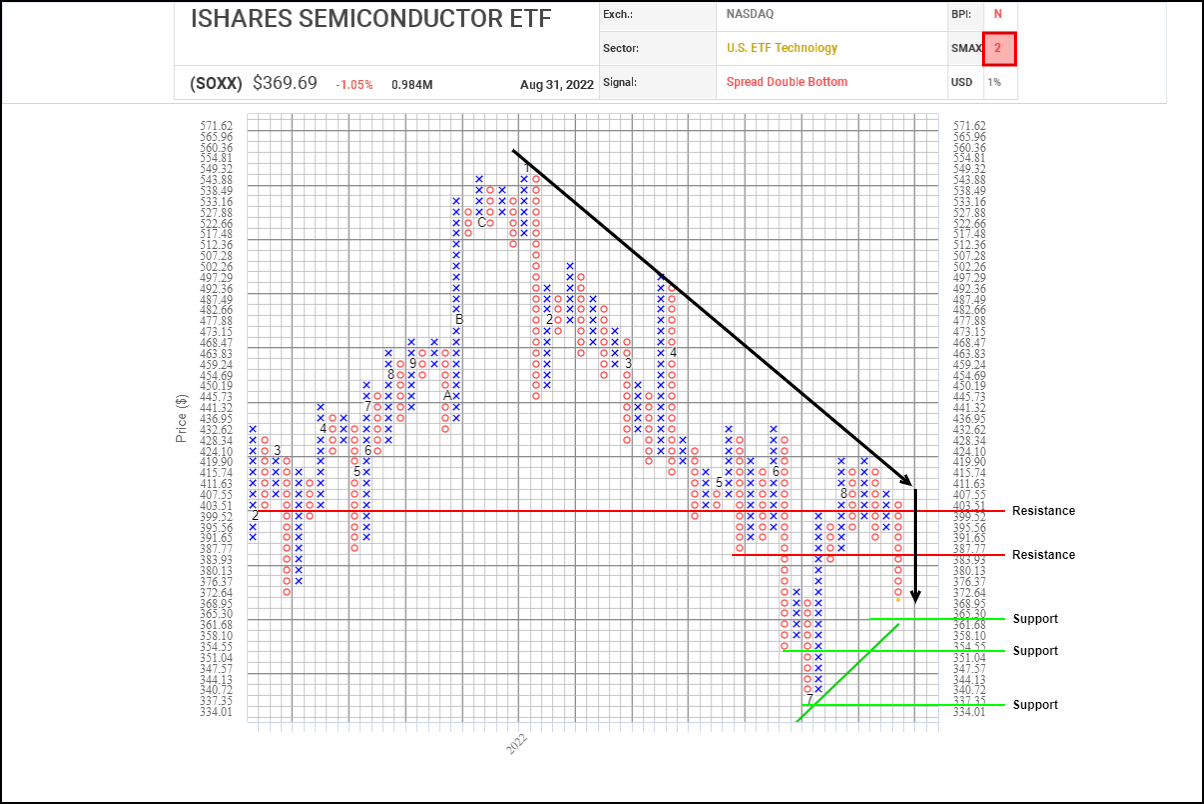 The semiconductor sector has been at the epicentre of the supply chain problem that has plagued the global economy for the better part of two years now, and chipmakers now find themselves in the middle of political tensions.

Political tensions between the US and China over Taiwan, one of the world’s key semiconductor producers, have been increasing over the summer. Late yesterday, Nvidia announced that the US Government has asked it to stop shipping some of its high-end semiconductors to China and to Russia as well.

Investors have historically been hostile to political interference in trade such as restrictions and tariffs (unless they create shortages like in energy markets), and Nvidia is falling again in premarket trading today. It remains to be seen what impact this move, and any potential retaliatory moves from other countries, has on the wider sector but growing political tensions could increase volatility in the coming weeks and months.

The iShares Semiconductor ETF (SOXX) has been trending downward since peaking in a Bull Trap back in January where it reached a new high by one row and then turned decisively downward. The recent rebound turned out to be another bear market rally, peaking at another lower high near $420.00. Bearish Double Bottom and Spread Double Bottom breakdowns that have extended into a bearish Low Pole have combined to indicate the start of a new downleg.

Next potential support appears near $361.65 based on a vertical count, then previous lows near $351.05 and $334.00. Initial rebound resistance appears near $387.75 based on a 3-box reversal. With a bearish SMAX score of 2, SOXX is exhibiting weakness against the asset classes.