The downward spiral by equity markets which started in August and accelerated following Fed Chair Powell’s Jackson Hole speech continued into September. Yesterday, the markets staged their first notable bounce in nearly two weeks although it’s unclear if this was just because markets were getting oversold in the short term or not as corporate news is in its usual quarterly lull between earnings seasons.

The overall trend toward monetary tightening by central banks continues this week with the Bank of Canada and the Reserve Bank of Australia raising their benchmark rates by 0.75% and 0.50% respectively. This morning the European Central Bank raised its lending rate by 0.75%, which was at the high end of expectations, and raised its deposit rate above zero for the first time since 2012. Expectations of more rate hikes has pushed up treasury yields in the US with the 30-year yield climbing toward 3.50% and its highest level since 2014. This has boosted the US Dollar at the expense of other currencies and maintained a headwind in front of equities and commodities. Economic news remains mixed with a better than expected US nonfarm payrolls offset by disappointing Chinese trade numbers. Overall, however, outside of China, there has been nothing in the data to give the central banks a reason to change their minds about monetary tightening.

In fact, Russia cutting off natural gas supplies to Europe, a move that should have been bad news, has had limited impact, suggesting that the recent pullback in equities may have already priced in a certain level of fear. That being said, we remain in what has historically been the weakest and most volatile time of the year for stocks. The coming week brings inflation and retail sales reports for the US, China and the UK. Investors may look to the US number in particular for signs of whether last month’s easing of inflation pressures was a one-time event or the start of a downward trend.

In this edition of the Equity Leaders Weekly, we take our monthly look at sector scopes and at recent weakness in the oil market. 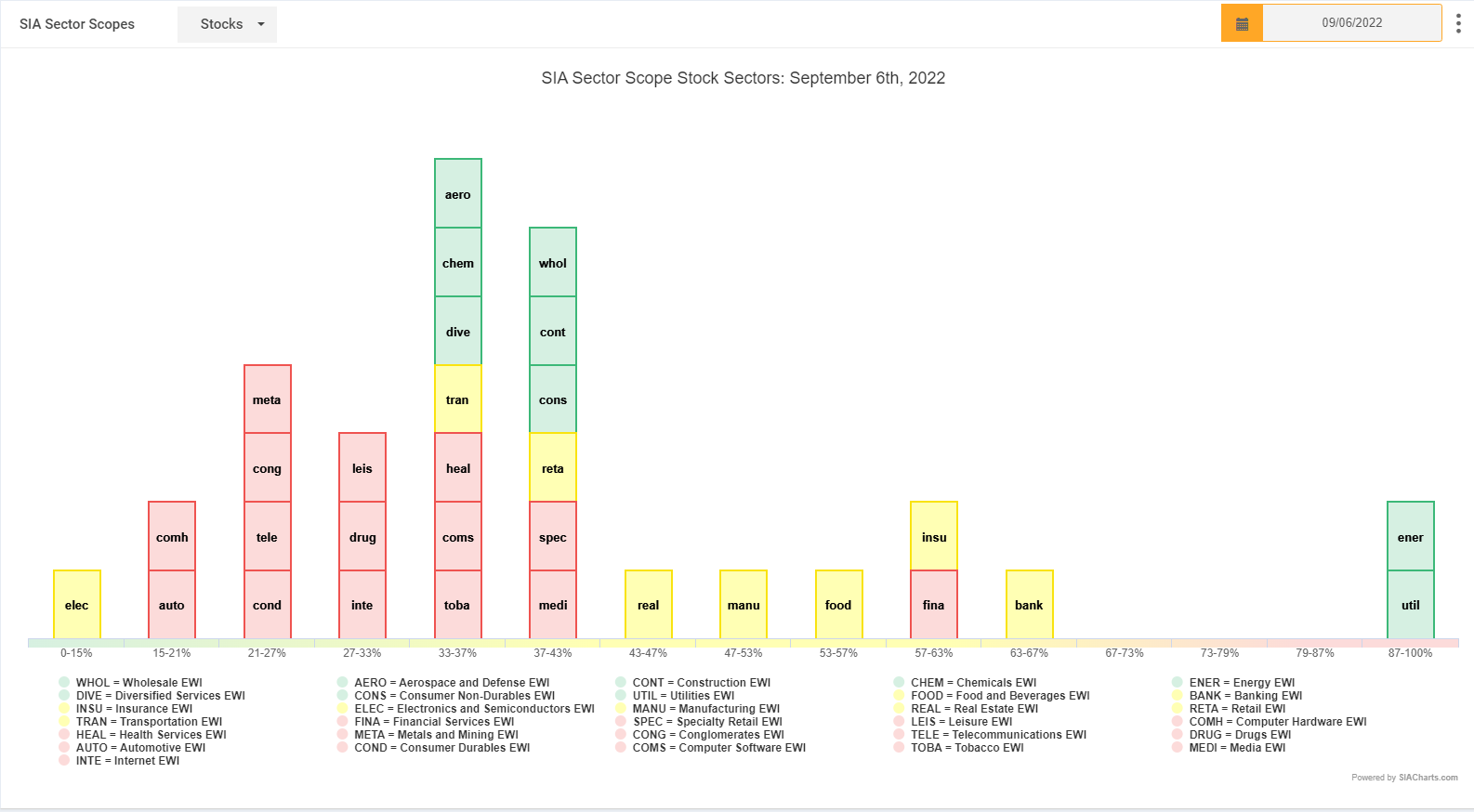 The Sector Scopes feature, found in the Markets > BPI tab of SIACharts, provides a snapshot of the bullish percent (percentage of stocks in a sector on bullish technical signals), for 31 industry groups. Analysis of the relative positioning of the groups across a spectrum and of changes in positioning over time can tell us a lot about changes in investor sentiment.

The last month has seen a serious swing in the sector scopes. In early August, the majority of sectors were piled up on the right-hand side (high bullish percent), and only one sector was just left of center, all of which was indicative of a bullish market that was approaching overbought.

Over the last few weeks there has been a major leftward shift of the sectors (falling bullish percent). The largest group of sectors is slightly left of center with only three groups in the two leftmost columns and five groups still right of center. This is indicative of a downward trending but not oversold market.

Electronics and Semiconductors had the worst month a sector can possibly have in the BPI report, swinging from the rightmost column to the leftmost column. We highlighted weakness in this particular group in the September 1st edition of the Equity Leaders Weekly.

Computer Hardware, Autos and a number of other sectors also had large leftward shifts. Energy and Utilities, on the other hand, both had a strong month, moving from the center right to the rightmost column. Insurance, Banks, Financials and Food managed to hold their ground relatively well. 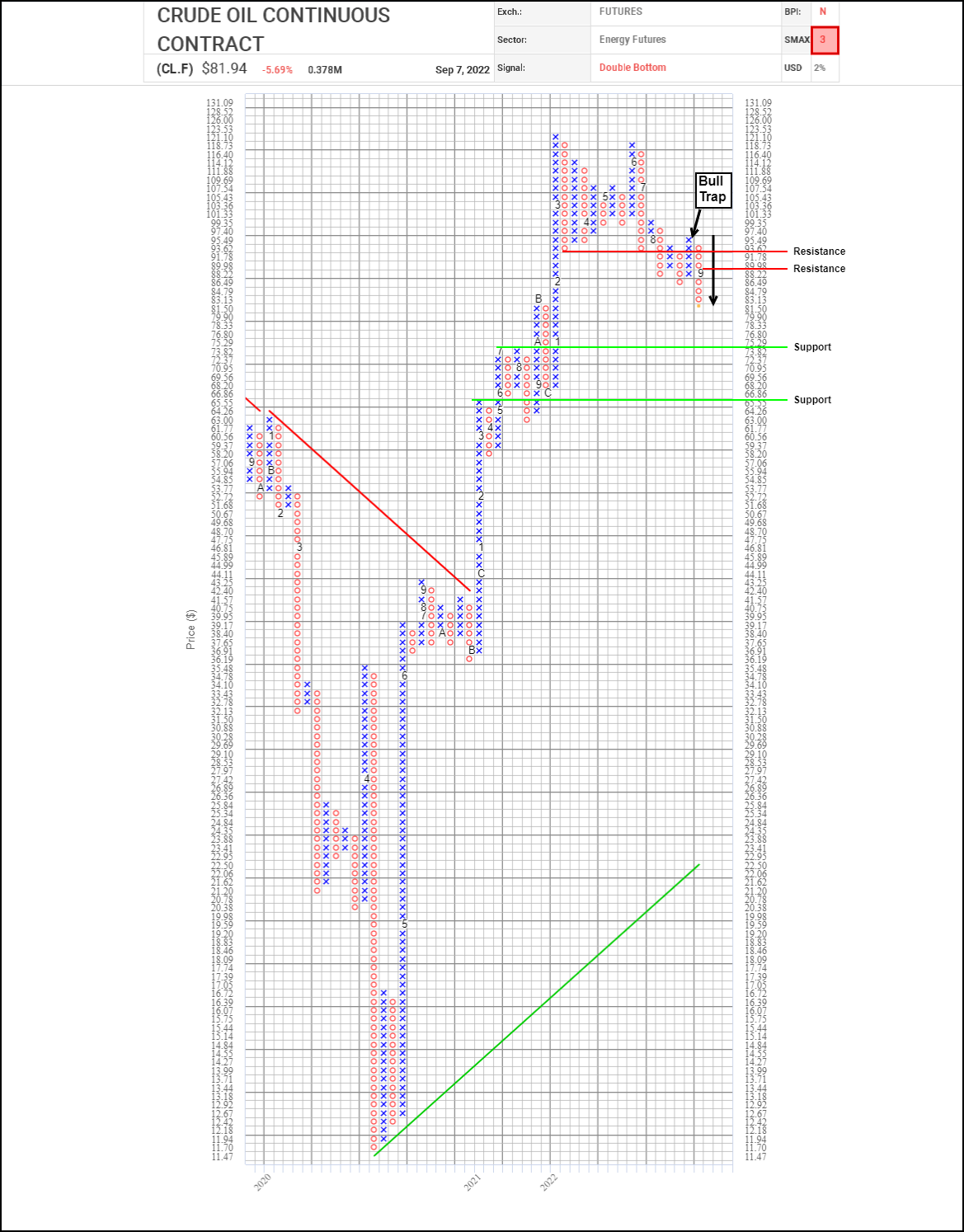 The oil market has been at the center of a political and economic tug of war which has had repercussions around the world this year. Back in the winter and through the spring, the focus was mainly on the supply side as the implementation of sanctions against Russia over its invasion of Ukraine disrupted the usual supply chains which then sent the prices of oil and gasoline soaring, igniting inflation, and forcing central banks to accelerate monetary tightening.While energy supply remains a major issue in Europe, elsewhere and more globally, focus in the oil market has increasingly shifted to the demand side over the summer. High fuel costs and rising interest rates in many countries has cut consumer demand and tipped several countries toward recession. A slowing global economy combined with a round of new lockdowns in China has lowered demand expectations and has started to drag on oil prices, even after OPEC+ announced a small decrease in the production quota this week.

This 2% chart shows that the technical picture for Crude Oil (CL.F) has been deteriorating for several months. A May-June surge failed to break through $122.50/bbl resistance and since then, the price has been retreating. In July, CL.F dropped back under $100.00/bbl, in August, and signaled the start of a new downtrend with a bearish Triple Bottom breakdown. Since then, Crude Oil has continued to trend downward, completing a series of bearish Double Bottom breakdowns. The last rebound attempted failed in a Bull Trap reversal when a breakout failed at only one row, also a bearish sign.

Next potential support for the current downleg appears at a previous breakout point near $73.80, followed by $65.55 where a horizontal count converges with previous support/resistance. Initial resistance on a bounce appears near $90.00 based on a 3-box reversal.