September has historically been one of the worst months of the year for stocks and this past week, the bears have had their claws out, with good reason.

Profit warnings from FedEx and Ford in the last few days and KB Home last night have reminded investors that as bad as things are here in North America, economic turmoil is even worse overseas. Because of these warnings, investors have started to reconsider their broader earnings expectations for this year and beyond, a process that could accelerate in the coming weeks with confession season starting and the fall earnings season about three weeks away.

Meanwhile, any last lingering hopes that the Fed would pivot and ride to the rescue of falling markets remaining after Fed Chair Powell’s Jackson Hole speech were crushed yesterday. The US central bank raised its benchmark rate another 0.75%, raised its Fed Funds forecasts to suggest another 1.00%-1.25% of increases could potentially be on the way by year end, raised its inflation forecasts and cut its GDP forecasts. At his press conference, Fed Chair Powell was decidedly hawkish, indicating that there are no plans to slow rate hikes until inflation is “convincingly” falling, that the Fed wants to see unemployment rise and the economy slow down to help ease inflation, that the housing market may need a correction, and that the Fed would want to see real interest rates positive (above inflation) across the curve by the time they are done tightening.

Powell’s comments sparked another selloff in US stocks late yesterday, sending major US indices to their lowest levels since early July. Meanwhile, US treasury yields have been soaring in the last week, with the 1-year and 2-year yields breaking above 4.00% putting pressure on bond prices. The US Dollar, meanwhile, continues to soar, rallying to levels last seen in 2002.

Fears of a slowing global economy have been pressuring economically sensitive commodities like copper and lumber. Energy markets remain mixed and volatile caught between concerns about falling demand and concerns about supply disruptions amid continuing political turmoil, particularly related to Russia and Europe.

With the end of the month and the third quarter approaching, investors may spend the next week repositioning their portfolios for the coming fall season. On top of questions about how a slowing economy and rising US Dollar may impact corporate earnings, plus the witches’ brew of tightening monetary policy, high inflation, slowing economies, and ongoing supply chain problems, US midterm elections are now less than six weeks away.

In this edition of the Equity Leaders Weekly, we take a closer look at the implications of a rising US Dollar for asset prices and corporate earnings and at the state of international equity markets. 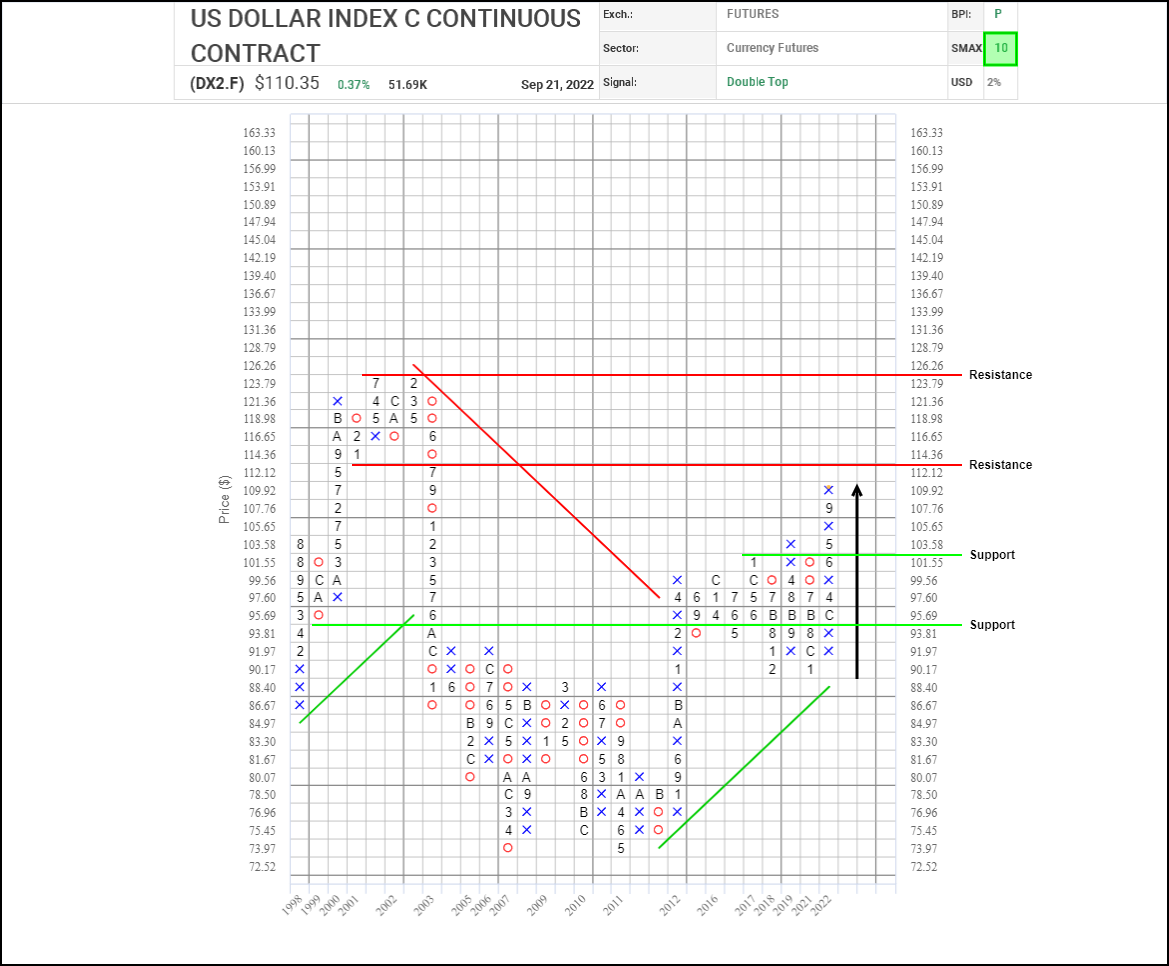 The US Dollar Index (DX2.F) has soared this year due to a combination of tailwinds, most notably a hawkish Fed boosting US interest rates and North America being pretty much the only haven of economic stability left in the world. It’s not uncommon for investors around the world to seek shelter for their capital in the US during times of trouble. The difference this year is that other countries have lost their safe haven status, particularly Japan, where the currency has been crushed by their central bank becoming the last dove standing, refusing to jump on the hawkish tightening bandwagon.

There are a number of implications for different asset classes from the US Dollar soaring to its highest level in twenty years. First, it has depressed other currencies. The Euro has dropped back to par, the Yen has completely crashed and the Pound has struggled. The only notable currencies that have even come close to keeping pace with the greenback this year (moderate declines) have been the Canadian Dollar and Gold. The rising US Dollar has helped to lessen the impact of commodity shortages and price increases in US Dollar terms, which exacerbated the impact of commodity inflation in other countries.

Gains in the US Dollar have the potential to significantly impact the earnings of US companies in the coming quarter. US companies with large overseas operations and exporters could be impacted quite negatively relative to companies who are importers or are more domestically focused.

This 2% chart highlights the significance of the current rally in the US Dollar. After spending a decade trading in a sideways range between approximately 88.00 and 103.00, DX2.F broke out to the upside this summer and has rallied up above 110.00. Next potential upside resistance appears near 114.35 and then 126.26, the boundaries of a previous 2000-2002 trading range. Initial support appears near 101.50 based on a 3-box reversal. With a perfect SMAX score of 10, which is rare to achieve for a currency, DX2.F is exhibiting strength across the asset classes. 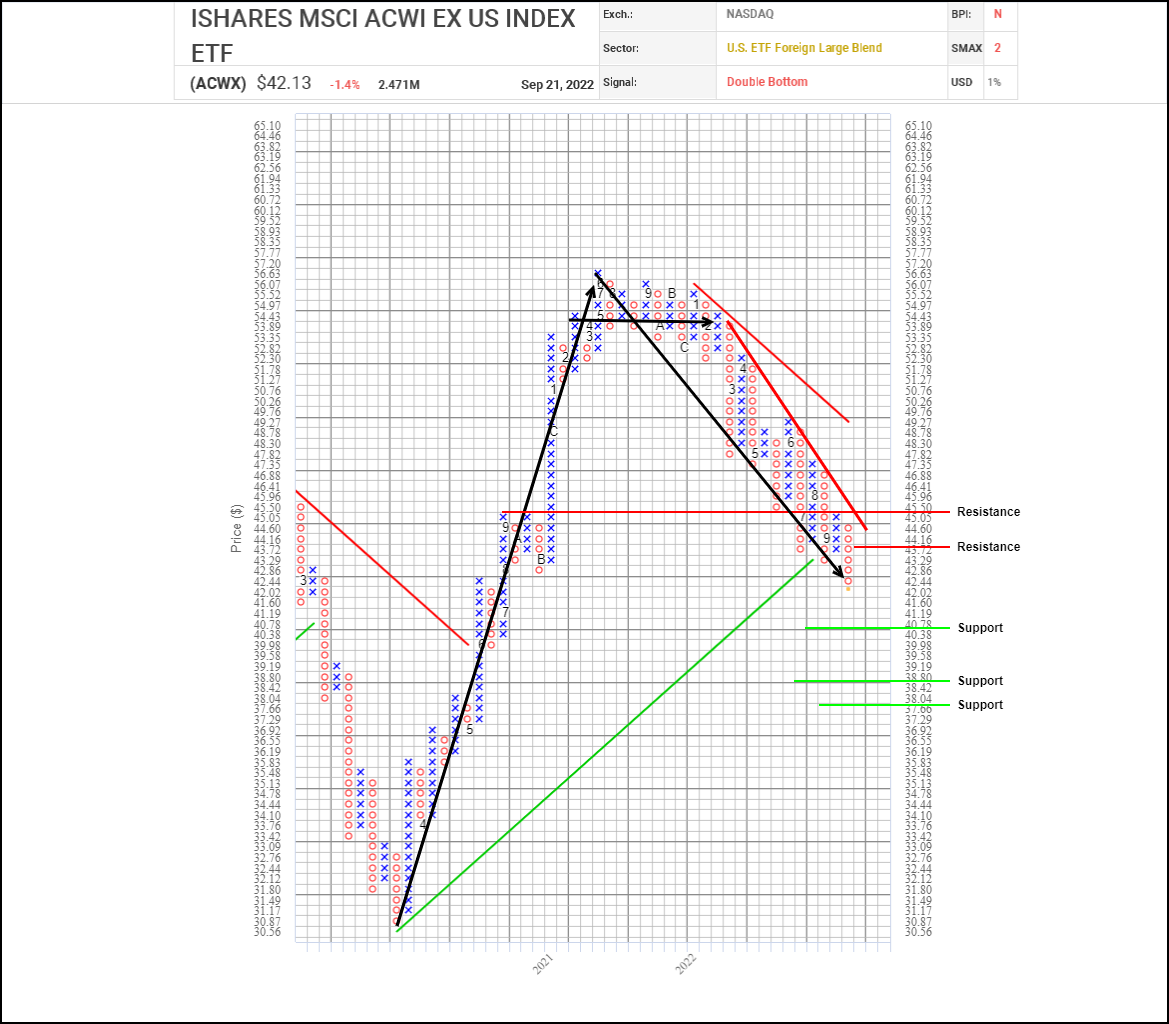 International Equities have been struggling for well over a year now impacted by a mounting number of problems that started with supply chain disruptions and have broadened out to include political tensions between Russia-Ukraine-Europe that has led to war, sanctions and an energy crisis in Europe, drought, more COVID lockdowns in China growing tensions between China and Taiwan, and more. Because of all of these issues international companies have struggled to keep their operations running smoothly, and

Like North American stocks, international equities, represented by the iShares MSCI ACWI Ex US Index ETF (ACWX) soared up out of the March 2020 market bottom, but formed a rounded top over the course of 2021 and have spent 2022 under distribution, leading global equity markets downward. In fact, ACWX peaked in June of 2021, a full six months ahead of the S&P 500.

Back in January, a sideways topping trend downshifted into a falling distribution trend, as shown by the series of consistently lower highs and lows on trend and a series of bearish pattern completions including several active Double Bottoms. The units also recently snapped an uptrend line then failed at a downtrend line on a subsequent rebound. Next potential downside support appears near $40.75 and $38.40 based on vertical counts, then $37.65 based on a horizontal count. Initial rebound resistance appears near $44.15 based on a 3-box reversal.