It has been another week of turmoil across world markets. Last week’s interest rate increases from the US, UK, Sweden and Switzerland tried to convince investors of central banks’ resolve to get inflation under control, driving up the US Dollar and treasury yields in the US, UK, Germany and elsewhere, while sending commodities, stocks and non-US currencies through the floor. At the same time concerns about the impact of a higher USD and global economic turmoil on the upcoming earnings season and demand for goods and resources also cast a cloud over world markets.

Through most of this year, the tone has been one of controlled demolition, that central banks were trying to slowly let the air out of the asset bubbles which had built up and trying to avoid a financial crisis that could unwind their tightening measures. This week, larger cracks started to appear, particularly in the UK where bond prices plunged along with the British Pound after the new cabinet brought in a mini-budget that included tax cuts and new spending. This forced the first dovish pivot by a central bank yesterday as the Bank of England cancelled its plan for asset sales (Quantitative Tightening) and relaunched asset purchases (Quantitative Easing) to stabilize its bond market.

Stocks rebounded on the Bank of England news but considering how oversold equities have become lately, the bounce of around 1.5% for US indices seems moderate. There remains the potential for a short squeeze in the short term, particularly the next two days as traders position themselves for quarter end on Friday.

Energy markets have also been in turmoil. Despite a natural gas pipeline explosion in the Baltic Sea, and a hurricane in the Gulf of Mexico, energy prices have been falling which suggests that at this point, commodity traders are more concerned about decreasing demand from a slowing world economy, than decreases in supply.

The next ten days bring a flurry of economic reports including GDP, inflation, PMI and employment reports from many countries around the world, which combined may paint a picture of what impact recent monetary tightening has had on economies, whether any progress has been made toward containing inflation yet or not and if any other central banks may need to make a dovish pivot sooner than previously expected. The turn of the quarter also brings confession season with the risk of companies disappointing on results or guidance due to a combination of the rising US Dollar and weakening global economy, particularly overseas.

In this edition of the Equity Leaders Weekly, we take a closer look at the UK as an example of sentiment toward international equities, and what action in some of the more defensive sectors like Consumer Staples is telling us about the state of the market. 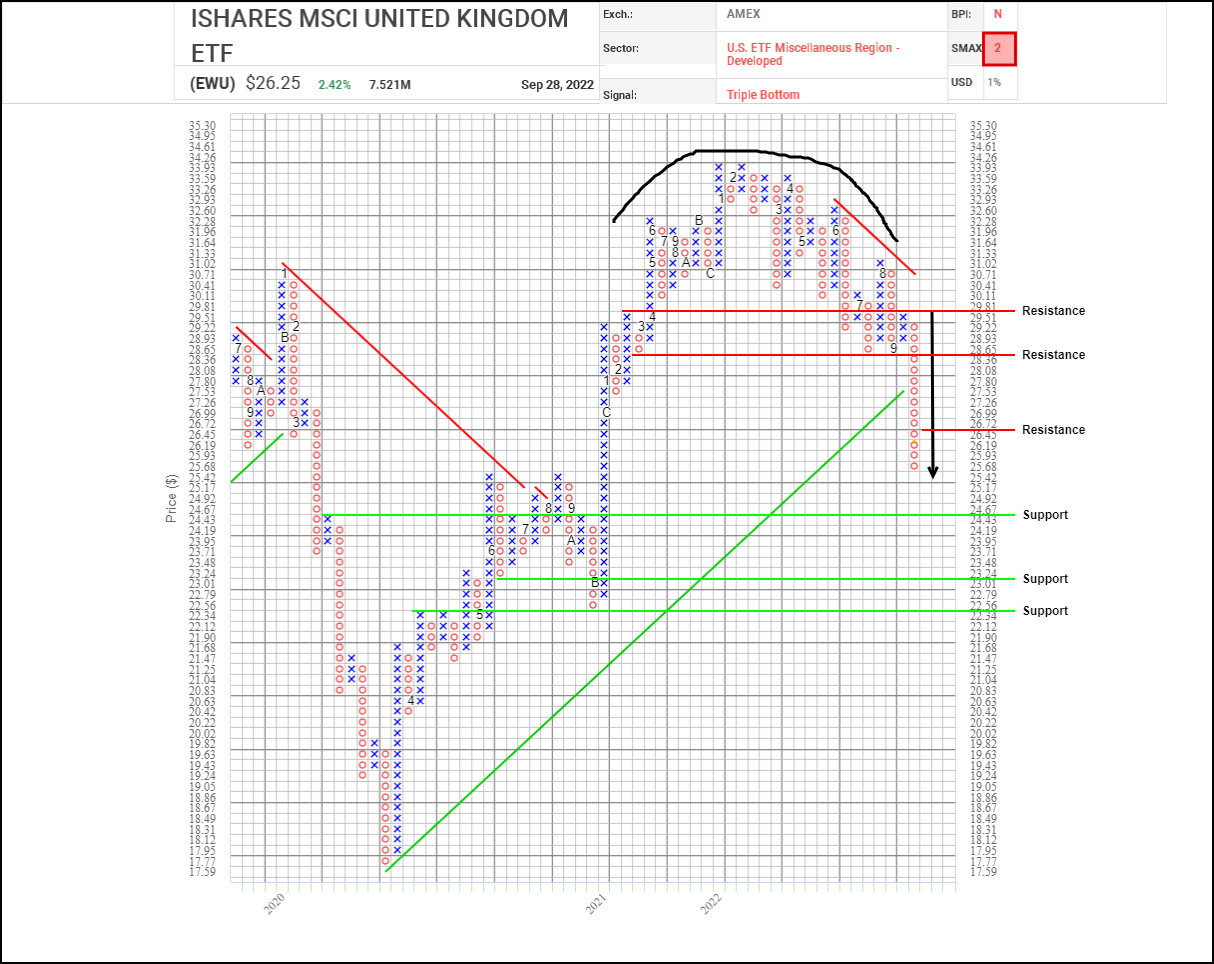 Of the three equity asset classes in the SIA Asset Class rankings, International Equity has consistently struggled the most this year relative to US Equity and Canadian Equity. As bad as things have seemed in North America, business conditions in Europe and Asia have been much worse this year between war, sanctions, energy crises, lockdowns, and ongoing supply chain problems. Financial conditions have also been worse overseas this year with collapsing currencies igniting even higher inflation, more pressure on central banks to rein it in, and higher stresses in financial markets.

The iShares MSCI United Kingdom ETF (EWU) highlights the shift in sentiment toward international equities. EWU formed a major rounded top over the course of about eighteen months but has turned decisively downward lately following a bearish Triple Bottom breakdown and snapping a long-term uptrend line.

Based on a combination of previous column highs/lows, and a horizontal count, potential downside resistance tests appear near $24.45, $23.00 and $22.35. Initial rebound resistance appears near $26.75 based on a 3-box reversal. With a bearish SMAX score of 2, EWU is exhibiting weakness against the asset classes.

In fact, perhaps due to UK’s status as an energy producer, and the FTSE’s higher relative weighting in resource stocks, the UK market has actually been one of the last international markets, along with Japan, to really start accelerating downward. This suggests that investors have become even more bearish lately, throwing in the towel on everything and perhaps heading toward some kind of short-term capitulation. 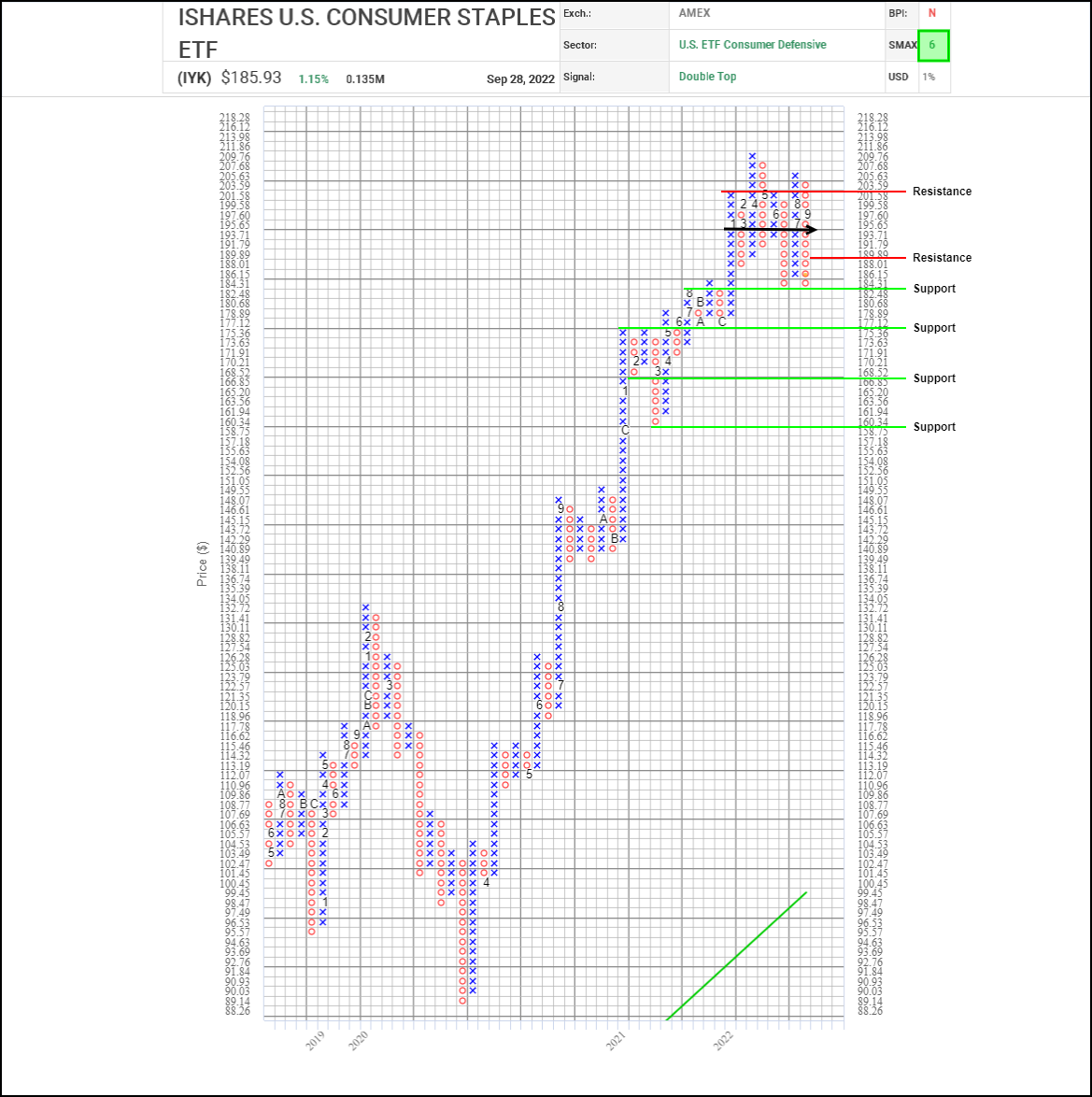 It has been said of the markets that in crises, diversification goes out the window and most correlations go to 1 as everything sells off together. So far this year, the overall market downtrend has been orderly with sector performance diverging. While technology, industrials, Consumer Discretionary and other cyclical sectors have been leading the way downward along with higher beta areas like emerging markets, small caps and cryptocurrencies. Energy and to a lesser extent, Materials, outperformed through the first half of the year but have dropped off lately along with commodity prices.

The last sectors left standing (mainly by posting smaller declines) have been the more stable, defensive sectors such as Health Care, Utilities, and Consumer Staples. These groups have started to decline lately as well with Pharmaceuticals breaking down and Utilities dropping back to test uptrend support.

A key support test is currently underway in the iShares US Consumer Staples ETF (IYK), which has been trending sideways since peaking back in April. IYK is currently testing support near $182.50. A close below that level would complete a Bearish Double Bottom and signal the start of a new downtrend with wider implications for the overall market as it would suggest support is finally giving way and a new downleg may be intensifying.

Should IYK break down, a combination of previous column lows, some of which coincide with vertical counts, suggest potential support could appear near $175.35, $166.85, and $158.75. Initial resistance on a bounce appears near $189.90.