Another week, another wild ride for world markets. It seems that the swings keep getting shorter and shorter these days. Since last Wednesday, we have had a 1-day bump on the Bank of England’s dovish pivot, a 2-day slide into quarter end, a 2-day trading bounce to start the new quarter helped by the Reserve Bank of Australia’s dovish pivot, and yesterday another downturn.

A big battle over the last week between bulls and bears over whether the BOE and RBA moves are the start of a broader dovish turn by central banks appears to be ending in favor of the bears, ie isolated pivots with the main group of central banks remaining hawkish. First, the Reserve Bank of New Zealand hiked its benchmark rate by 0.50% as expected, and indicated it remains focused on fighting inflation. Second, a stronger than expected US ADP Payrolls report suggested the US employment market remains robust weakening the case for a Fed pivot. Third, OPEC+ announced a 2 million barrel per day production cut over US objections, indicating their interest in supporting the oil price which could make it more difficult to tame inflation.

The OPEC+ cut also raises another question. If the cut has been prompted by expectations of lower energy demand, how badly is the world economy doing, particularly outside of North America, and what does this mean for the upcoming earnings season which gets underway next Thursday and Friday? So far confession season has been quiet, but that could change and one has to wonder what happens if earnings are positive but guidance is negative or companies start to complain about the negative impact of the high US Dollar? The business news calendar for this week and next is heavily weighted toward Thursdays and Fridays with a lull in between, including a full Canadian and partial US holiday on Monday. This week wraps up with the big US nonfarm payrolls and Canadian employment reports on this Friday with investors focusing both on job creation and wage inflation. Next Thursday and Friday bring the US consumer price index and retail sales reports, and the start to earnings season with Big Banks kicking things off as usual.

In this edition of the Equity Leaders Weekly, we look at the price of crude oil and at the Russell 2000 as an indicator of the state of the US market heading toward earnings season. 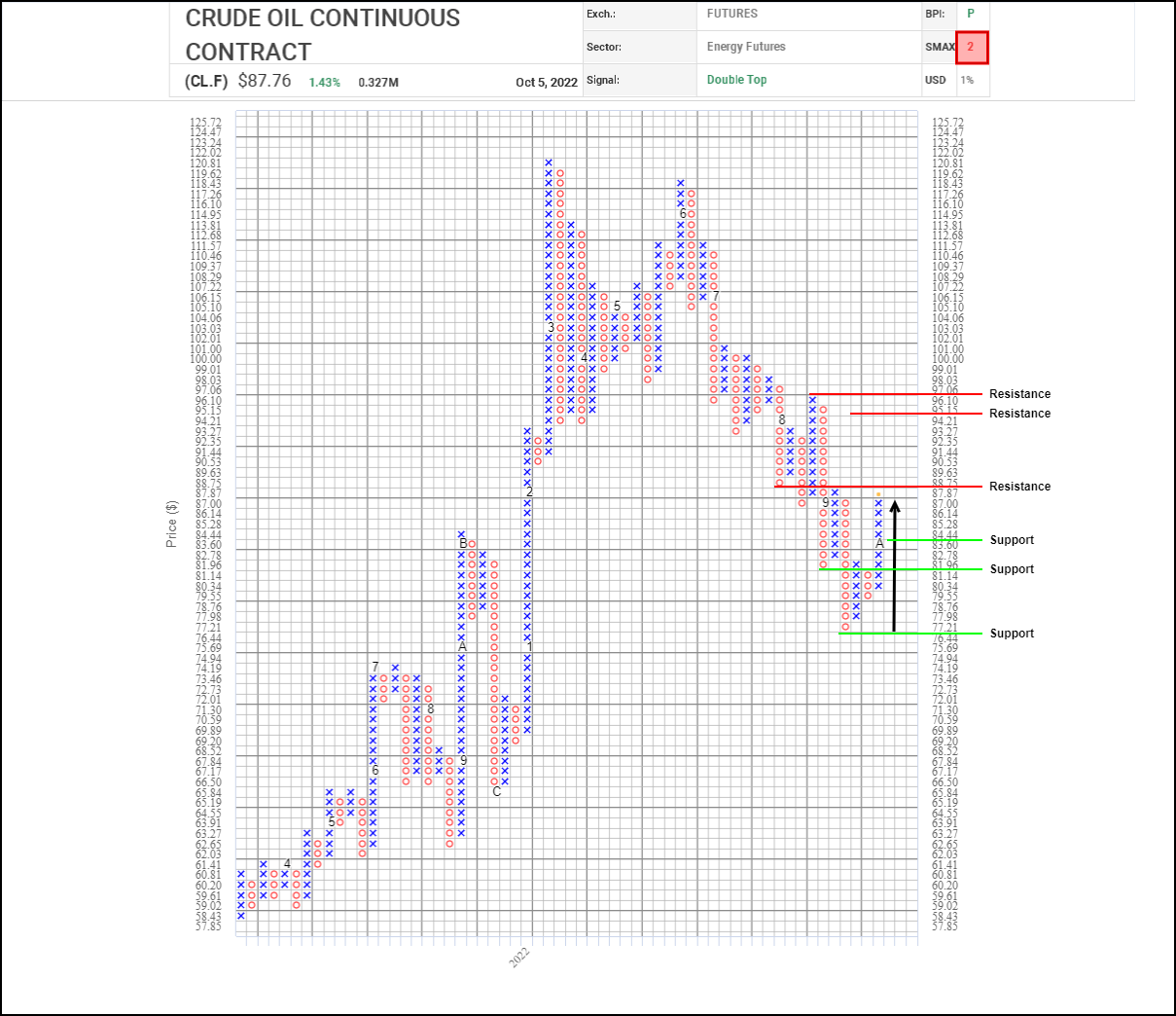 The Crude Oil Continuous Contract (CL.F) has staged several large swings over the last year, driven by two main factors. Fear of a supply shortfall, particularly related to the Ukraine War and related sanctions drove price spikes in January-March and May-June. Since June the balance of fear has tipped toward more concern about a demand shortfall due to lockdowns in China and a generally weak global economy outside of North America.

Supply side political actions have also influenced the price. In recent months, increased supply into the US market from the Strategic Petroleum Reserve has helped to push the price down. In recent days, speculation surrounding what turned out to be a larger than expected 2 mmbbl/d production cut from OPEC+ has helped to shore up the price, keep it above $75.00/bbl support and spark a Double Top breakout. Moving forward, it remains to be seen how long the US may continue SPR withdrawals, especially after next month’s midterm elections, or how committed OPEC+ is to keeping the price up.

Crude Oil is currently approaching initial resistance near $88.75. a breakout there would complete a bullish spread double top pattern and confirm the start of a new uptrend. Next potential resistance after that appears in the $95.15 to $97.10 zone where previous column highs and lows cluster with a horizontal count. Initial support appears near $83.60 based on a 3-box reversal. 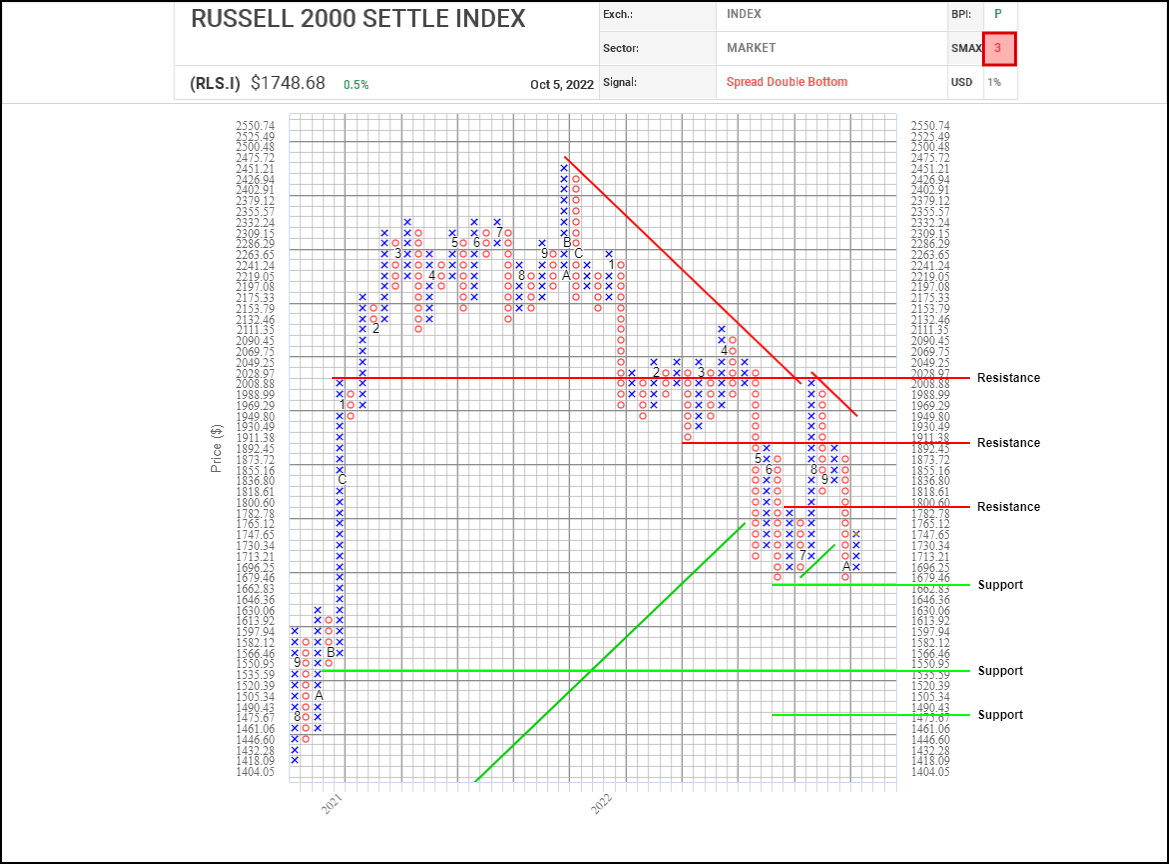 The Russell 2000 Index (RLS.I) gives investors insight into broad based market sentiment across a large number of companies particularly compared with the more focused large cap indices. Being focused on small cap stocks, it also provides an indication of investors appetite for risk over time.

Divergences between the Russell and its large cap peers can emerge near significant market turning points. Back in March of 2021, the Russell 2000 levelled off while the S&P 500 Index (SPX.I) continued to climb. The final peak for the Russell 2000 came in November about six weeks ahead of the S&P 500’s peak in January.

So far this year, the Russell 2000 has been under distribution, steadily trending downward in tandem with other major indices. Recent trading action has been interesting. Last week, the S&P 500 dropped under its June low before finding support and rebounding. The Russell 2000 held above its June low, a sign that perhaps the current bear market may be entering its later innings.

A breakdown below 1,662 would complete a bearish spread triple bottom and signal the start of a new downleg with next potential support at a previous low near 1,535. A rally up through a round number and previous high near 1,800 would indicate that the current rebound may be more than just another trading bounce.