A week ago, stock markets in North America and overseas staged an explosive rally in the wake of last Thursday’s better than expected US Consumer Price Index Report, which suggested that US inflation pressures are starting to ease which could enable the Fed to at least slow the pace of interest rate increases.

This dovish shift in market sentiment also played out in bond markets, which rebounded as long-term treasury yields fell back under 4.00%, and in currency markets where the US Dollar retreated, lifting the lid off of precious metals, particularly Gold. The yellow metal also benefitted from turmoil in cryptocurrency markets where the FTX exchange went bankrupt, sparking a flight away from cryptos and into other alternative currencies.

The big question so far this week has been whether last week’s stock market pop was another bear market rally or the start of a sustainable rebound. On the positive side, US midterm elections returned a split decision, US producer prices and Canadian consumer prices confirmed that inflation pressures in North America are finally easing, and US retail sales beat expectations. On the negative side, China did not completely abandon its “Covid Zero” policy as some had hoped, which has weighed on commodities this week, and Europe remains in political and economic turmoil.

So far this week, indices have been in a holding pattern, not building on last week’s rally but not giving much of it back either. The US Thanksgiving holiday is a week from today and between now and then there is still a lot of scheduled news with the potential to rock the markets.

On the corporate side, earnings reports continue to roll out from major US retailers. So far retailer earnings have been very polarized with most companies that have reported either doing a lot better or a lot worse than street expectations, which has sparked significant moves in both directions within the group. Economic reports for the coming week are dominated by retail sales, housing market, and inflation numbers. US durable goods orders and Flash PMI reports headline a particularly busy pre-holiday calendar next Wednesday.

In this edition of the Equity Leaders Weekly, we look at recent trends in gold stocks and the homebuilding sector. 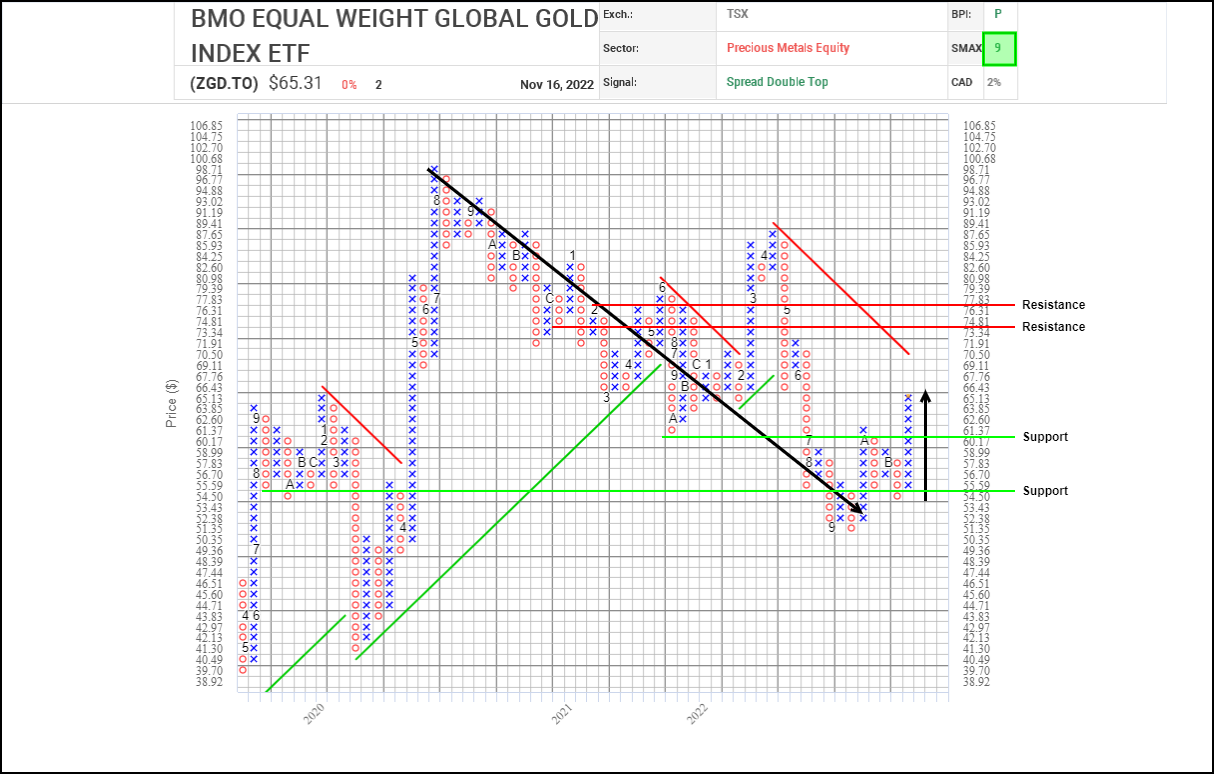 In last week’s issue of the Equity Leaders Weekly, we discussed how the price of gold has maintained its role as a store of value this year, outperforming nearly all of the major paper currencies and cryptocurrencies. We also noted that this broader outperformance was obscured by this year’s big US Dollar rally, Gold’s nemesis and the one currency it is most commonly compared with.

With the US Dollar rally finally starting to fade in the last month, Gold has started to shine once again, which has had a positive impact on sentiment toward gold stocks.

A general downtrend trend in the BMO Equal Weight Global Gold Index ETF (ZGD.TO) that had started in the summer of 2020, appears to have finally been contained above the $50.00 round number back in September. Since then, the ETF price has been bouncing back, establishing a new uptrend of higher lows, and completing a series of bullish Double Top and Spread Double Top breakouts with the current advance extending into a bullish High Pole.Next potential resistance on a 2% chart appears at a downtrend line near $70.50, then $74.80 based on a horizontal count, and $77.85 based on a vertical count. Initial support appears near $60.00 where a round number, 3-box reversal and previous column low align. 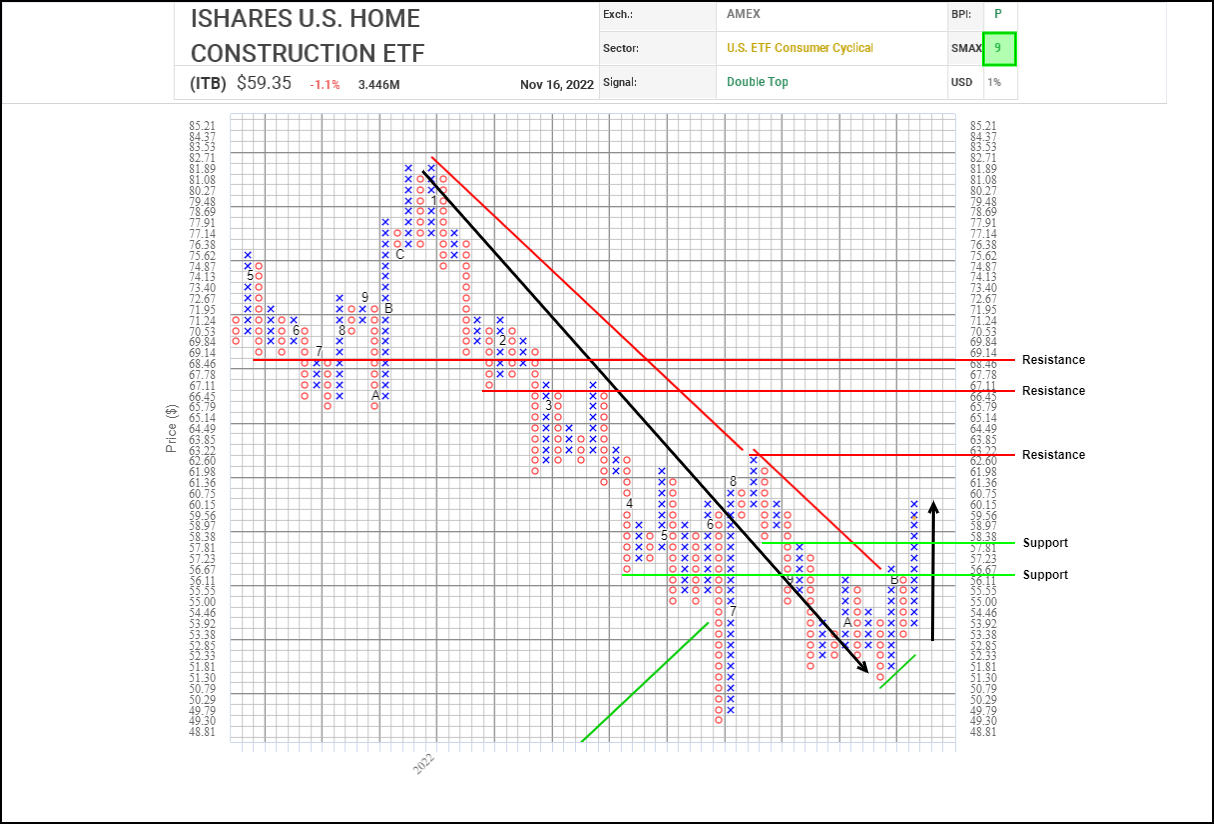 The homebuilding sector, exemplified by the iShares US Home Construction ETF (ITB) has been hammered this year by the sharp and sudden increase in interest rates which has made mortgages much more expensive at the same time that a slowing economy, high inflation in core staples products and sharp declines in equity and bond markets negatively impacted consumer’s ability to spend on discretionary purchases.

Housing stocks appear to have taken the brunt of this perfect storm in the first half of this year when ITB lost nearly half of its value plunging from a high near $82.50 to a low near $49.00. In the last few months, the sector has stabilized, holding above its June low. In recent weeks, and particularly this month, ITB has turned back upward, snapping out of a year-long downtrend and completing a series of bullish Double Top and Spread Double Top breakouts, the latest of which has extended into a bullish High Pole.

Next potential resistance appears near $63.25 where a vertical count converges with the August high, then $67.10 and $69.15 which are based on horizontal counts. Initial support appears near $57.80 based on a 3-box reversal and a previous column low.