The New Years Rally has continued and broadened this week, with equity markets in North America and around the world still climbing and several commodity markets posting gains as well.

There appear to be three main themes driving current market action. First, inflation reports from several countries including the US, Canada, China and the UK have been coming in below expectations, indicating that price pressures continue to ease. Along with this, the pressure on central banks to continue aggressively raising interest rates has been fading

Second, China posted better than expected retail sales and industrial production numbers for December. This news, along with the country reopening its borders to travelers last week has stoked speculation for a rebound in its economy and resource demand, and ignited rallies in China-sensitive commodities like Copper and Crude Oil, along with equities in countries sensitive to China like Australia.

Third, earnings season has commenced with mixed results from US banks and brokerages. Airlines, however, have done really well so far even with December’s weather-related disruptions. Earnings season ramps up and broadens out in the coming week with results starting to roll out from senior companies in the Industrials, Technology and Energy sectors. Headliners include Netflix today, Schlumberger tomorrow, Microsoft, 3M, and GE Tuesday, and Tesla Motors, IBM, Boeing Wednesday, Intel, Visa, and MasterCard next Thursday.

In the last 24 hours, equity markets have started to weaken, with weak US retail sales and Empire State Manufacturing data increasing concern over a hard landing relative to a soft landing. It remains to be seen if this is a correction or the start of a downturn.

Economic reports for the coming week are dominated by housing, inflation and retail sales reports from around the world. Flash PMI reports, the first peek at January economic conditions are due on Tuesday. The Bank of Canada holds its first meeting of the year next Wednesday, with investors wondering if we could see another 0.50% rate hike like last time, or a slower paced 0.25% increase. Investors should note that Saturday is Lunar New Year and during the holiday festivities, several Asia Pacific markets will be closed for 1 or more trading days this week which could impact overnight trading in stocks and commodities.

In this edition of the Equity Leaders Weekly, we look at what the price of copper is telling us about sentiment toward China’s economic reopening, and at a change in sentiment toward interest-sensitive real estate stocks. 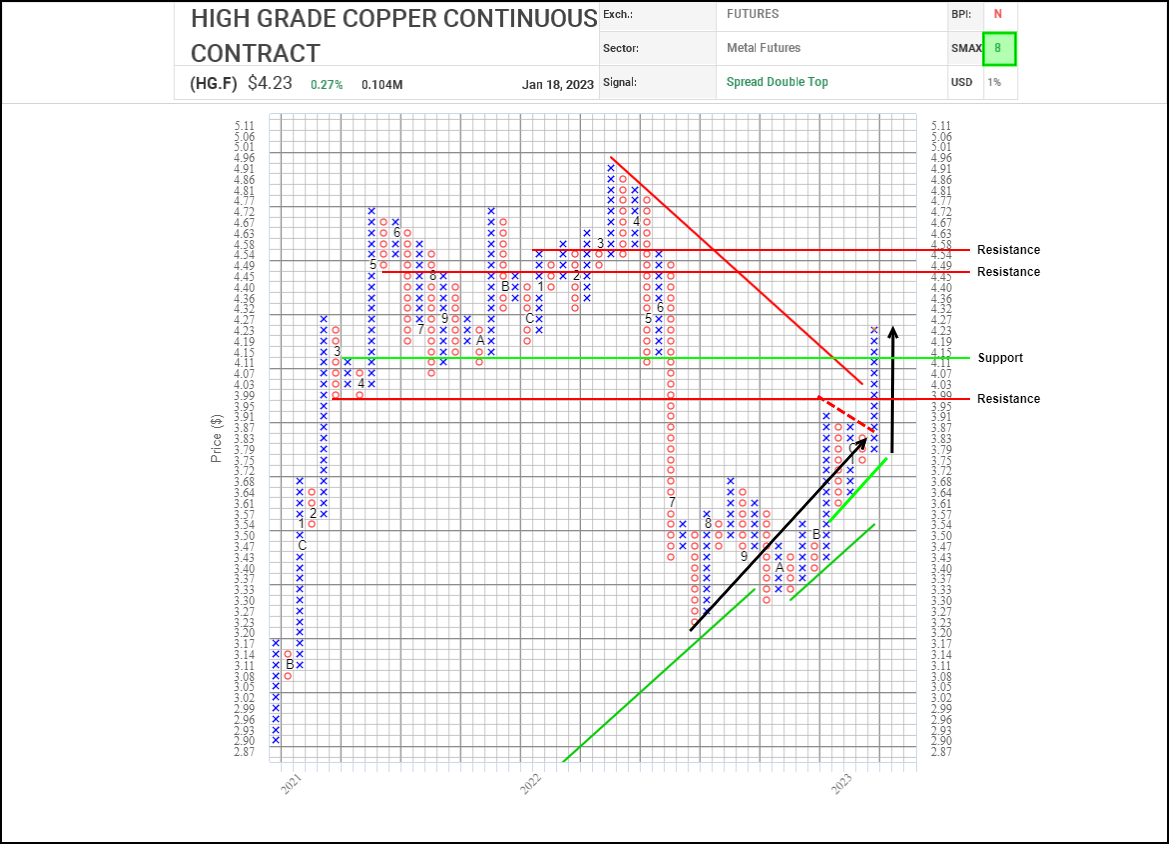 With its use in so many industrial and consumer applications, Copper (HG.F) is widely considered to be a proxy for the health of the global economy and of resource demand. In recent years, Copper has become particularly sensitive to changes in demand from China.

Back in the summer, Copper plunged off a cliff as China shut in its economy in another round of COVID lockdowns. It bottomed out between July and November. In recent weeks, as China has taken steps toward reopening, Copper has been on the recovery trail, completing bullish Double Top and Spread Double Top breakouts and establishing a new uptrend of higher lows. Continuing its recovery path, Copper recently broke out of a Symmetrical Triangle, snapped a downtrend line, and extended a breakout into a bullish High Pole. 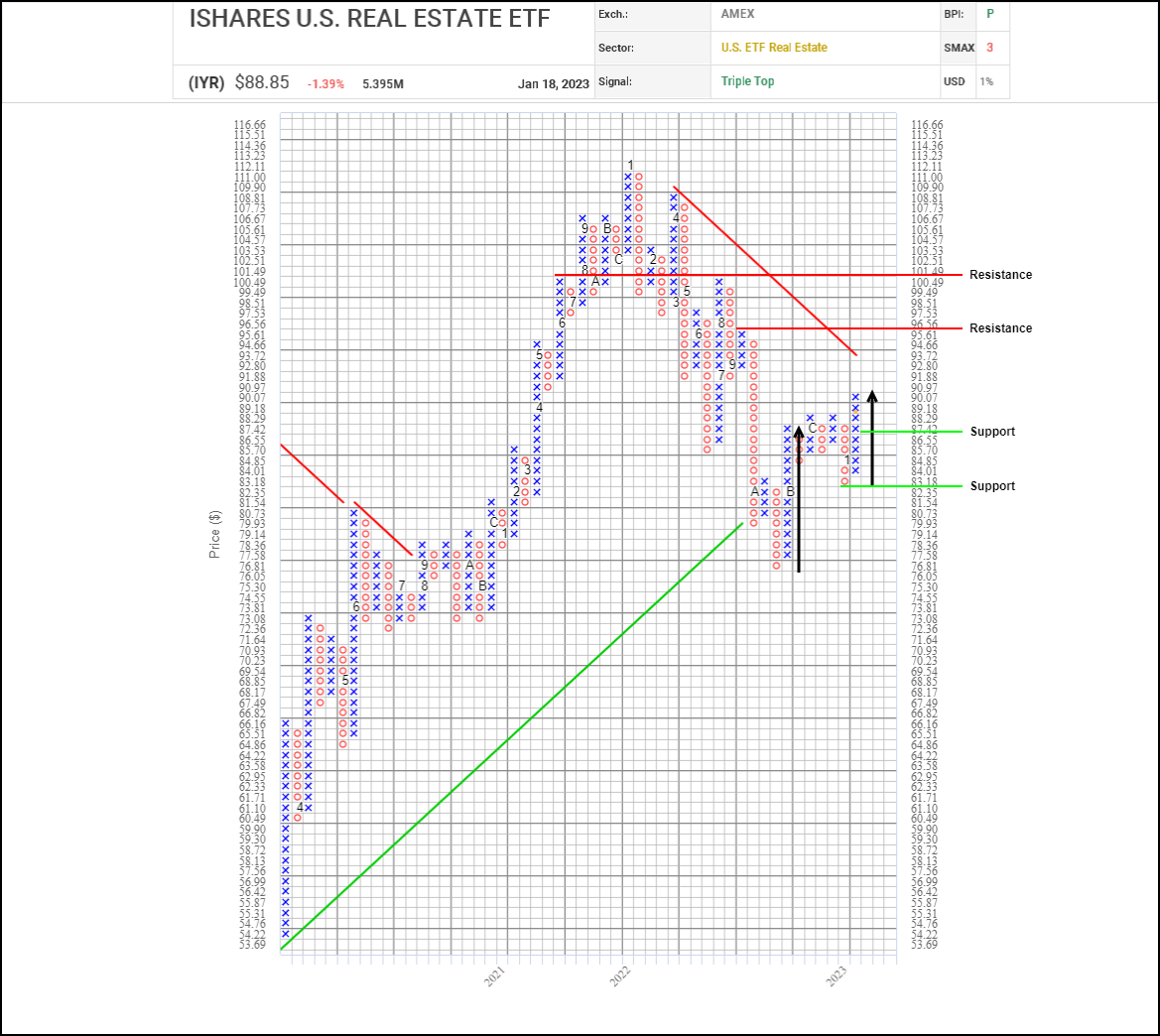 In last week’s edition of the Equity Leaders Weekly, we highlighted a turnaround in US homebuilding stocks which has continued and also broadened to include the wider US real estate sector. Real estate stocks over the long-term, along with Utilities, tend to be sensitive to and often move in the opposite direction to interest rates, similar to but often more volatile than bonds.

Economic data over the last week has been supportive of the sector. In addition to easing inflation pressures potentially enabling central banks to slow or even stop raising interest rates this year, the US National Association of Home Builders (NAHB) Housing Market Index not only beat market expectations (35 vs street 31) it registered its first uptick since late 2021.

The iShares US Real Estate ETF (IYR) spent most of 2022 under distribution, steadily retreating in a downtrend of lower highs. After bottoming out and bouncing in October-November, IYR spent the end of 2022 base building. IYR has kicked off 2023 with a bullish Triple Top breakout which has confirmed the start of a new recovery trend and indicated that a step accumulation pattern of rallies followed by consolidation phases at higher levels may be emerging.Initial potential upside resistance appears at a 45-degree downtrend line near $93.75, followed by a previous column high near $96.55, and then the $100.00 to $101.50 zone where a round number, vertical count, and previous column highs cluster. Initial support appears near $86.55 based on a common 3-box reversal.