Coming out of a very strong November which saw significant surges across equity and commodity markets, and new all time highs for major US indices including the Dow Jones Industrial Average achieving 30,000 for the first time, the start of December has been muted.

Equities and commodities have paused this week, as markets which had run up on anticipation of several developments, digest corporate/industry news and valuations. For example, the positive impact of new vaccine developments, including the approval of Pfizer’s vaccine in the UK has been fading. Action in US retailers has been mixed following Black Friday / Cyber Monday which showed a decisive shift from in-store to online shopping with deals now spread out over several days to weeks. Canadian bank earnings have come in stronger than expected driven by particularly good results from markets/wealth management related businesses and smaller loan loss provisions.Economic news out of the US has been mixed this week with construction spending and ISM new orders beating expectations, but ADP payrolls and the ISM Manufacturing PMI report disappointing and suggesting slowing growth. Service PMI reports are out today and then tomorrow US nonfarm payrolls and the Canadian Labour Force Survey cap off the week.

With earnings season now pretty much over and economic news winding down after this week, political negotiations have moved back into the spotlight. This week negotiations among OPEC+ oil producing countries over whether to extend supply cuts or slow production increases previously scheduled for January have been at an impasse and could potentially impact energy markets in the coming days. Also, after weeks of languishing around the US election, economic stimulus and government funding talks have gotten back underway in earnest this week with a Friday December 11th deadline looming to avert a government shutdown.

In this week’s issue of Equity Leaders Weekly, we take a look at the emerging recovery in real estate stocks as an example of previously lagging sectors starting to catch up and at lumber as an example of renewed interest in industrial commodities. 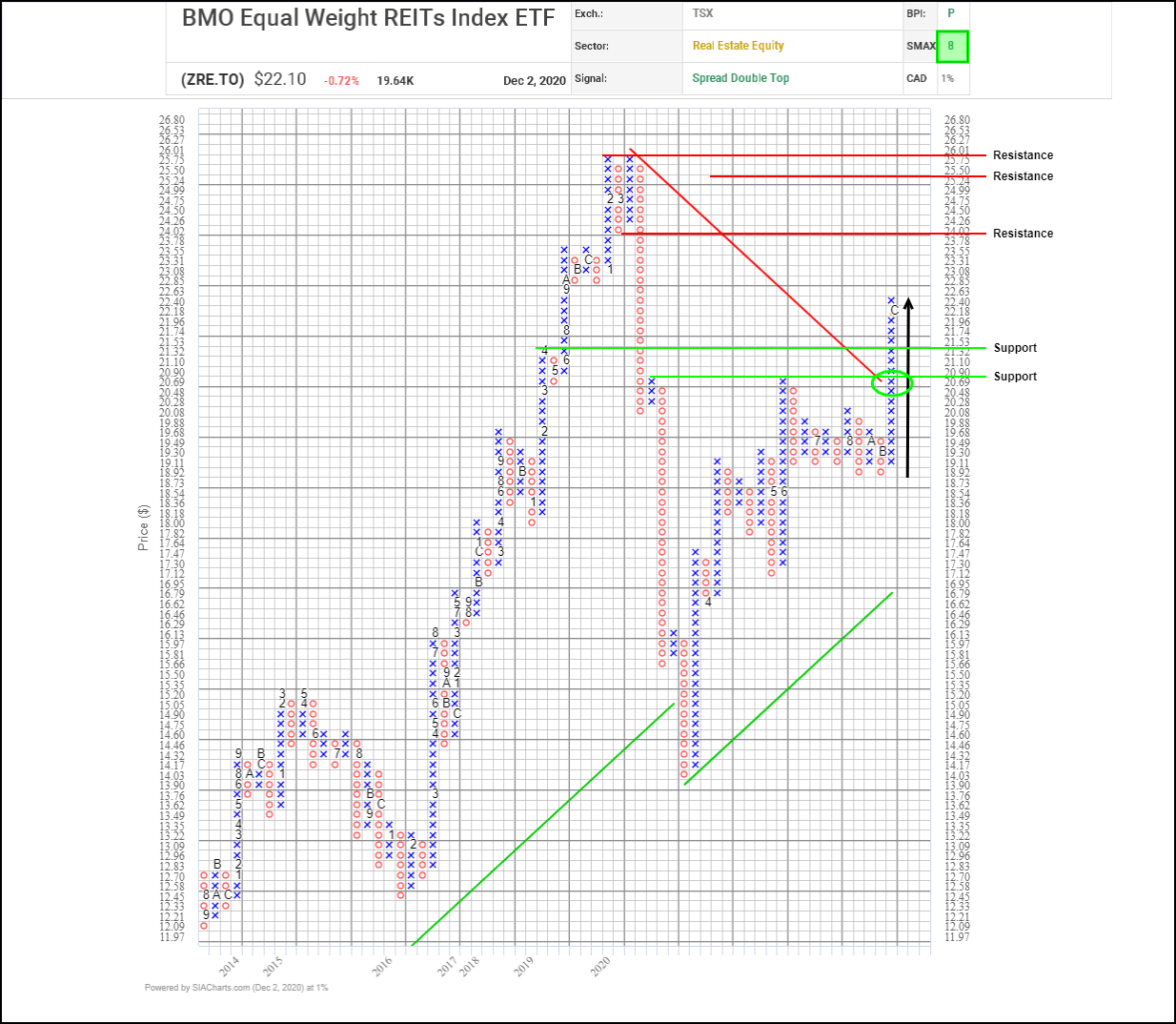 Trading action in Canadian REITS, and the real estate sector in general has tended to initially lag behind turns in the overall market, then catch up quickly. For example, the BMO Equal Weight REITs Index ETF (ZRE.TO) didn’t turn downward until March, well after major indices peaked in February, then fell off a cliff. The sector recovered along with the overall market between March and June but then it levelled off and spent most of the last six months trending sideways.

In recent weeks, the REIT sector has come under renewed accumulation with ZRE.TO completing a series of bullish pattern breakouts starting with a Double Top and a Spread Double Top More recently, the shares regained $20.00 and broke through a longer-term resistance level and snapped a downtrend line clearing $20.90, confirming the start of a new uptrend.

ZRE.TO has continued to advance into December toward $22.50. Next potential resistance on trend appears in the $23.80 to $24.00 zone where previous column highs/lows converge, then the $25.00 to $26.00 zone where a round number, the previous peak and multiple vertical and horizontal counts converge. Initial support appears in the $21.50 to $21.75 area where a previous column high and a 3-box reversal converge. 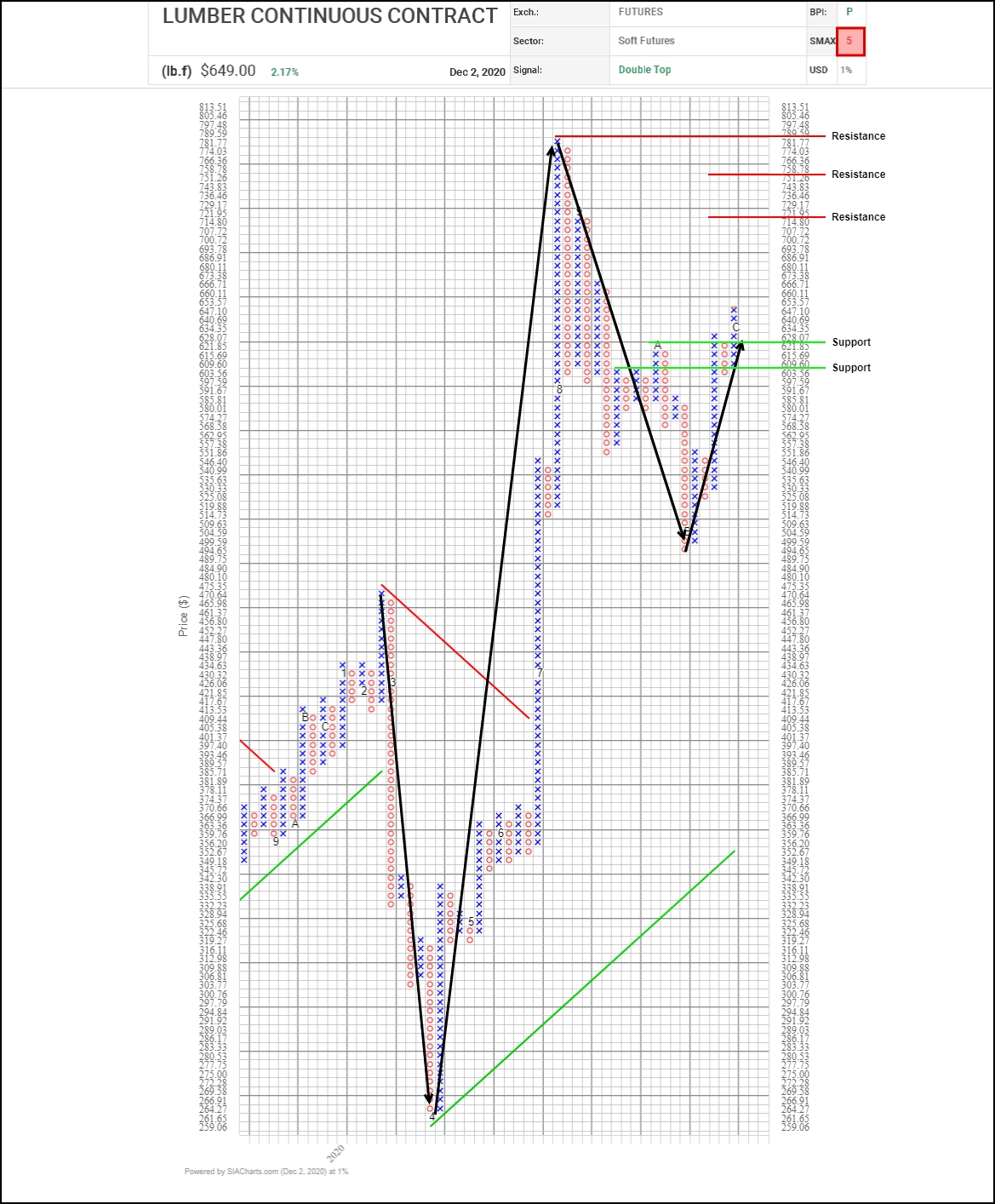 The price of lumber (LB.F) has been on a major roller coaster ride this year driven by its sensitivity to economic conditions, particularly construction, soaring and crashing as the impact of lockdowns, reopening and stimulus impacted both demand and supply at different points in time.

From a high near $470 in February, lumber plunged down toward $260 in March, then rocketed up toward $790 by August, and dropped back toward $490 by November. In recent weeks, Lumber has come under renewed accumulation, rallying back above $600 as vaccine progress has renewed hopes of a lasting economic recovery. Better than expected US construction spending numbers announced this week has also helped lumber’s cause.

This week, lumber has broken out to the upside once again, clearing $635 to complete a bullish Double Top pattern, build on a recent bullish Spread Double Top and signal the start of a new upleg. Next potential resistance appears near $722 and $759 based on vertical and horizontal counts, then the August peak near $790. Initial support appears near $622 based on a 3-box reversal.

The current recovery in lumber prices also appears to be having a positive impact on forest products stocks.