2021 is off to a generally positive start although two of the three trading days so far have seen significant intraday swings and reversals, to the downside on Monday and then to the upside on Wednesday. Defensive havens such as Gold and Silver have mirrored equity market action, rallying on Monday and then retreating on Wednesday.

Investors have been responding positively to indications that the long US election campaign is finally ending with the Democrats poised to take control of both the Senate and the White House away from the Republicans this month. As vaccine rollouts continue, investors appear to be taking a positive stance, looking over the valley of near-term lockdowns toward potential reopenings later in the year. Breadth remains positive as well with the Russell 2000 soaring to a new all-time high this week.

Commodities have also continued to rally this week both on an absolute and relative basis with Commodities leapfrogging over the equity asset classes to take over top spot in the SIA Charts Asset Class Rankings this week. Crude Oil has been leading the charge, climbing on the news that Saudi Arabia is planning a voluntary 1 mmbbl/d production cut for the next two months to offset the negative impact of lockdowns on demand. Meanwhile, economically sensitive metals like Copper and Platinum also continue to rally. The US 10-year treasury note yield has regained 1.00% this week, also a sign of investors anticipating an economic recovery. Gains in commodity prices have also been having a positive impact on resource stocks and in countries where resource stocks have a higher weighting including Canada, Australia, Russia, Mexico, Norway and Saudi Arabia, just to name a few.

Economic data has been mixed so far this week. US ISM manufacturing PMI beat expectations, but US construction spending and ADP payrolls fell short of expectations, the latter actually declining in December as new lockdowns started to take their toll. The coming days bring a number of key economic reports including US nonfarm payrolls and Canadian employment on Friday, and then US retail sales later next week. Earnings season doesn’t start until Friday the 14th and then picks up over the following two weeks. Confession season has been quiet so far.

In this week’s issue of Equity Leaders Weekly, we focus on action in Commodities, particularly Crude Oil and Platinum. Reeling from a price crash early in the year, Crude Oil (CL.F) spent most of the second half of 2020 building a base for recovery in the $35.00 to $45.00/bbl range. In November, a series of breakouts which snapped a downtrend line, completed a bullish Spread Triple Top and then cleared the previous high set in September combined to signal the start of a new uptrend.

Along with general demand recovery anticipation, increasing confidence that oil producers may continue to manage production, has helped to improve sentiment toward oil, particularly this week when Saudi Arabia stepped up with a two-month 1 mmbl/d voluntary production cut to support the price through the current round of lockdowns.

A brief 3-box correction quickly ended recently with a bullish Double Top breakout and a move back up over $50.00/bbl for the first time since February, signalling the start of a new advance. Next potential upside resistance appears near $56.70 then $59.60 based on vertical and horizontal counts. Initial support appears near $48.35 based on a 3-box reversal. 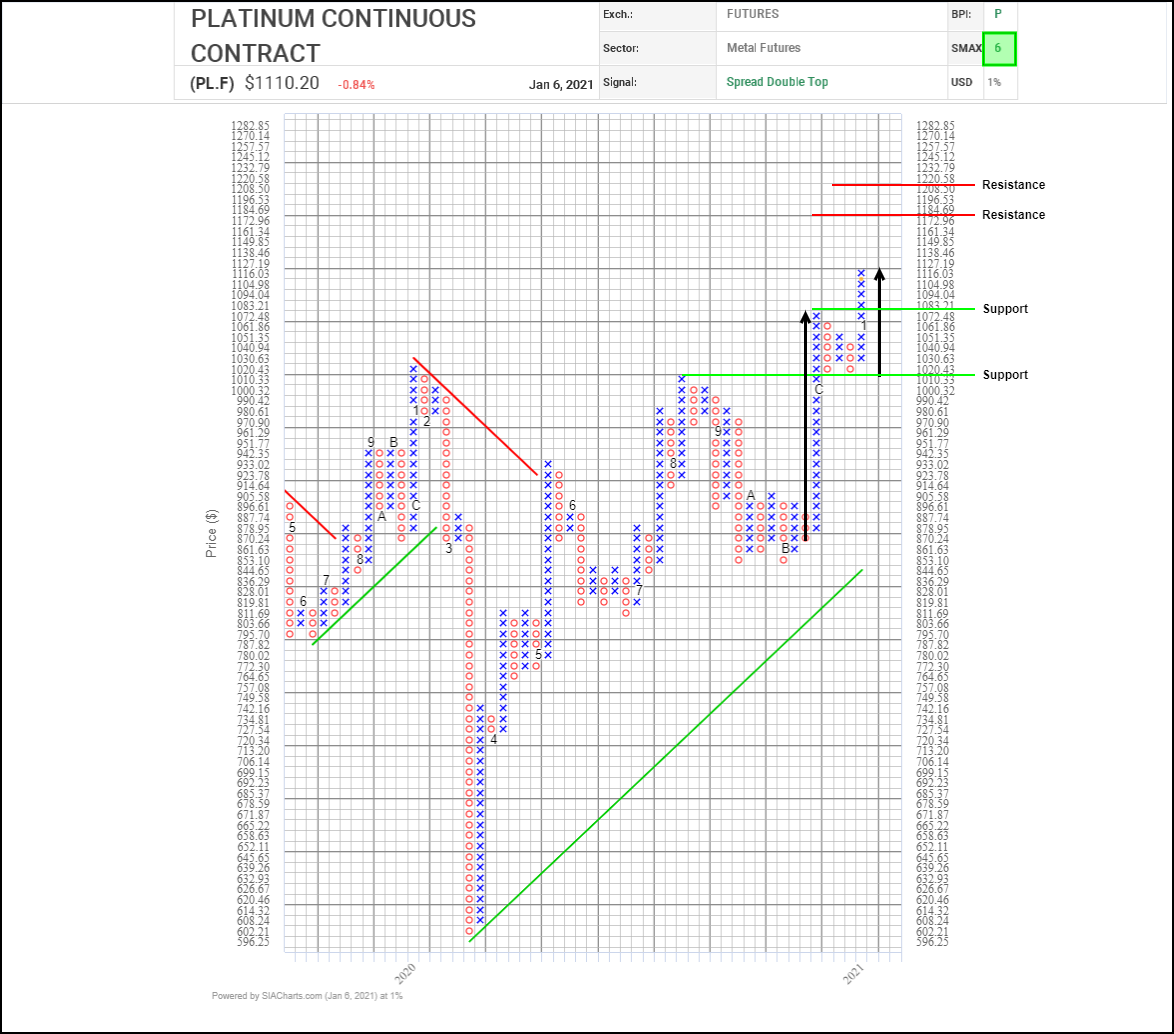 This week, Platinum has benefitted from both sides of the metals market moving, as commercial metals have continued to climb on anticipation of an improving resource demand environment, while precious metals have started to rebound with the US Dollar still under pressure. Sentiment toward industrial/consumer stocks, including autos, has remained positive, also putting a tailwind behind platinum.

A correction in Platinum bottomed out back in October and the metal price resumed its primary uptrend with a bullish Spread Triple Top breakout back in November. The price paused recently to consolidate a breakout over $1,000/oz and this month it has broken out to the upside again, clearing $1,085/oz and completing a bullish Spread Double Top pattern.

Next potential upside resistance for Platinum appears near $1,185 and then $1,220 based on vertical and horizontal counts. Initial support appears near $1,070 based on a 3-box reversal and a retest of the recent breakout point.