The turn of the month has been particularly choppy for North American markets which retreated into the end of January, bounced back to start February and have stabilized into midweek. The stampede into and then back out of Reddit driven stocks such as GameStop had somewhat of a ripple effect across markets between short squeezes and margin calls. This effect has already started to subside with some of the Reddit stocks falling back, while an attempt by some to spark a rally into Silver quickly fizzled out. There have been some significant divergences between sectors as the week has unfolded. Marijuana stocks, which we featured in last week’s issue of the Equity Leaders Weekly, have continued to rally while retailers and transports have been crumbling.

This week’s economic news, including manufacturing and service PMI reports, US construction spending and US ADP payrolls have come in better than expected, with US employment rebounding in January. Overall, it appears that the impact of COVID Wave 2 on the world economy has been less severe than a year ago, and with case counts continuing to fall in many regions/countries, investors may be differentiating between winners/losers and looking ahead to potential reopening's later this year as vaccines roll out.

Commodities have been climbing this week, particularly the energy group. Anticipation of improving demand and indications that OPEC members have been keeping to their quotas has helped to boost crude oil. Meanwhile, natural gas and heating oil have soared as temperatures plunged and big winter storms rolled through eastern consuming regions.

Agricultural commodities have also been rallying this week, led by livestock and some grains.

In the coming week, earnings reports continue to roll in with the focus turning to Canada where results are due from the big 3 insurance companies, senior pot stocks, gold producers, forest products and others. US headliners include Walt Disney, Uber, Twitter, Coca-Cola and others.

In this week’s issue of Equity Leaders Weekly, we take a look at recent strength in the price of crude oil and recent weakness in transport stocks. 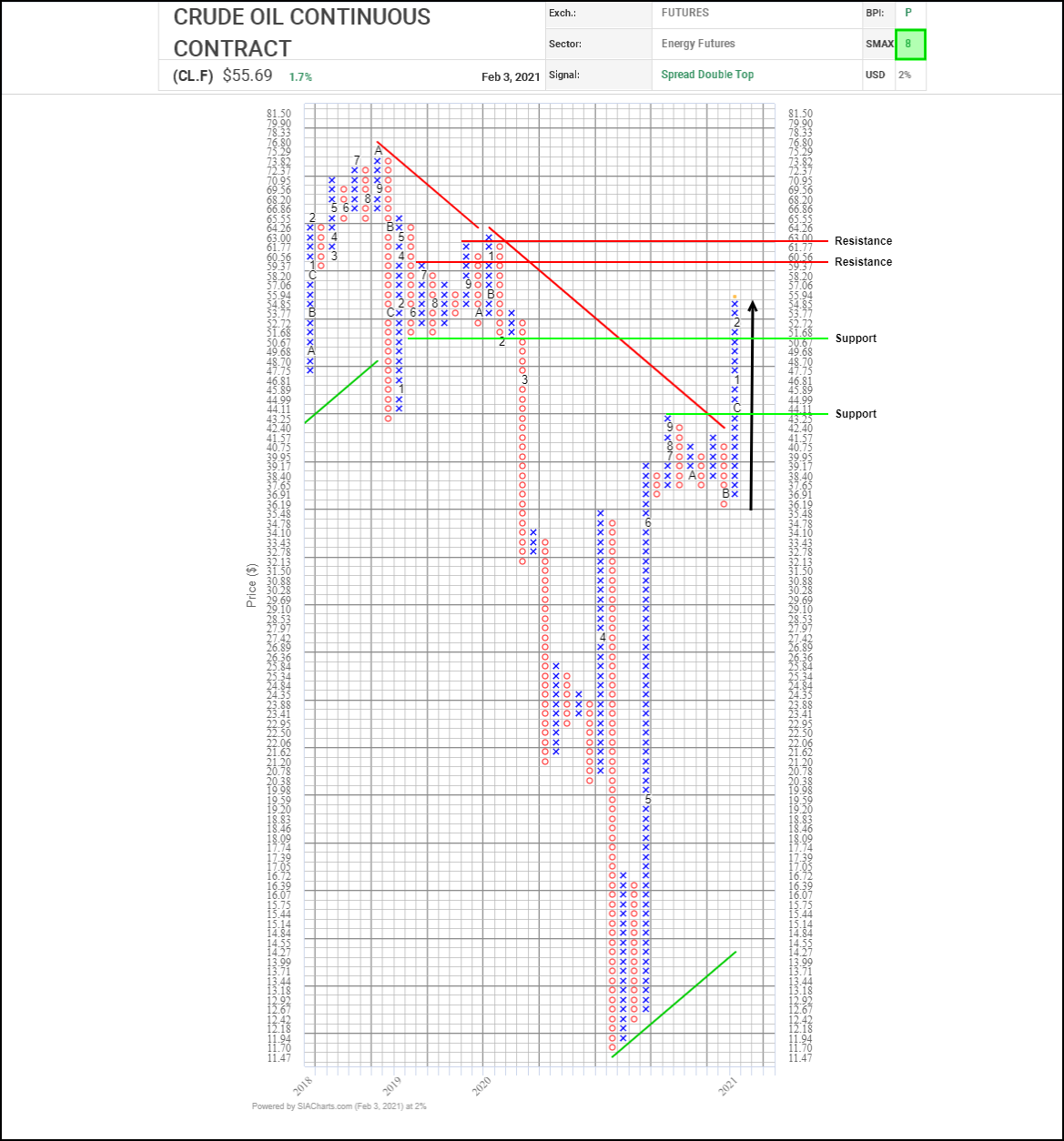 Since we last featured crude oil in the January 7th edition of the Equity Leaders Weekly, the price has continued to steadily climb, gaining 9.99% over the last four weeks. Over this time, OPEC producers have kept to their quotas, increasing confidence that OPEC+ can manage supply through significant changes in demand, and easing oversupply fears.

Meanwhile on the demand side, as with stocks, energy investors appear increasingly prepared to look past the impact of near-term lockdowns, preferring to focus on the potential for an economic reopening later this year as COVID case counts continue to decline and vaccines continue to roll out, that could shore up demand for energy.Back in November, the Crude Oil Continuous Contract (CL.F) snapped out of a downtrend and broke out of a Spread Double Top base clearing $44.50. Oil has not looked back since then, rallying up through $50.00 and then $55.00 without even so much as a 3-box correction on a 2% chart.

Next potential upside resistance for crude oil appears in the $60.00 to $63.00 zone where a round number, vertical and horizontal counts and previous column highs cluster. Initial support appears near $50.65 based on a 3-box reversal. 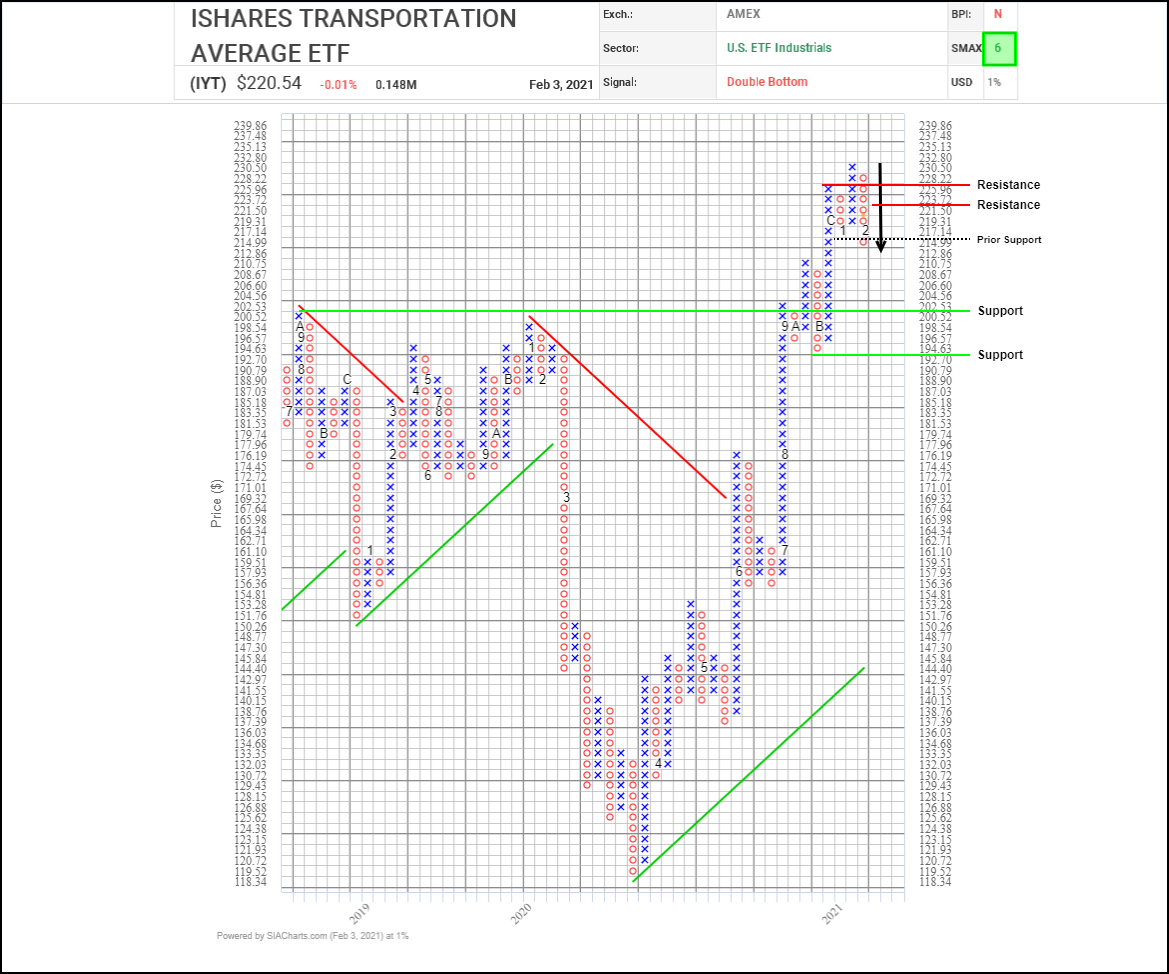 For over a century Dow Theory has stressed the importance of the Dow Jones Industrial Average and the Dow Jones Transportation Average confirming each other’s trend. In recent months, both indices have been trending in the same direction and in January they confirmed each other’s new all-time highs.

Because of this, the recent downturn in transportation stocks raises a yellow warning flag that the broad market trend may be changing. Transports have recently encountered two significant headwinds. First, new travel restrictions have weighed heavily on airlines some of whom have suggested that another round of layoffs could be coming. Second, oil and gasoline prices have been on the rise again lately, increasing a key cost for transportation companies.

This week, the iShares Transportation Average ETF (IYT) broke down below $215.00, completing a bearish Double Bottom pattern, signalling the start of a new downtrend. So far, this appears to be a sector correction, but if the Dow Industrials were to confirm this downturn in future, it could become a broader bearish sign.Initial downside support appears in the $200.00 to $205.00 zone where a round number and previous breakout points converge, followed by $192.70 based on a horizontal count. Initial rebound resistance appears near $223.75 based on a 3-box reversal.