March went out like a lamb over the last week with the Dow Industrials and the S&P 500 both achieving new all-time highs, while indices which had struggled mid-month, such as the NASDAQ Composite and the Russell 2000, stabilized. A survey of Sector ETFs across North America found many of the charts in consolidation mode with either rectangles or symmetrical triangles forming. Equities currently find themselves in a situation common to the transition between a recession ending and an expansion becoming more established. With last year’s crisis winding down, some of the emergency liquidity brought in a year ago to deal with the COVID collapse are starting to be scaled back. Emergency breaks to US banks on their capital requirements ended yesterday, which appears to have led to a reeling in of some margin lending culminating in the liquidations at Archegos Capital which sparked selloffs in some media companies and banks. Meanwhile, the Bank of Canada has started to hint that it may start to taper its asset purchases in the coming months. This reduction in easy money rocket fuel, and a rotation of capital between equity market sectors may limit the near-term upside for broad indices.

On the other hand, the near-term downside appears limited as well. Recent economic data has been positive, including strong manufacturing PMI reports out of Europe this morning, the Biden Administration just announced a $2.1 Trillion, 8-year infrastructure spending program, and a new earnings season is approaching, providing fundamental support for markets. The fact that Archegos Capital’s margin problems were contained to itself, a couple of its lenders and a few of its holdings and did not spark a wider contagion can be seen as a sign that overall market confidence remains strong.

A flurry of news is due over the next few days including more manufacturing PMI reports today. US nonfarm payrolls come out on tomorrow’s Good Friday holiday so their impact may influence trading more on Monday, and service PMI reports are due early next week. Earnings season doesn’t start for another couple of weeks, but we are into confession season which has been quiet so far.

In this issue of Equity Leaders Weekly, we take a look at two sectors which have been on the rebound lately, real estate and semiconductors. 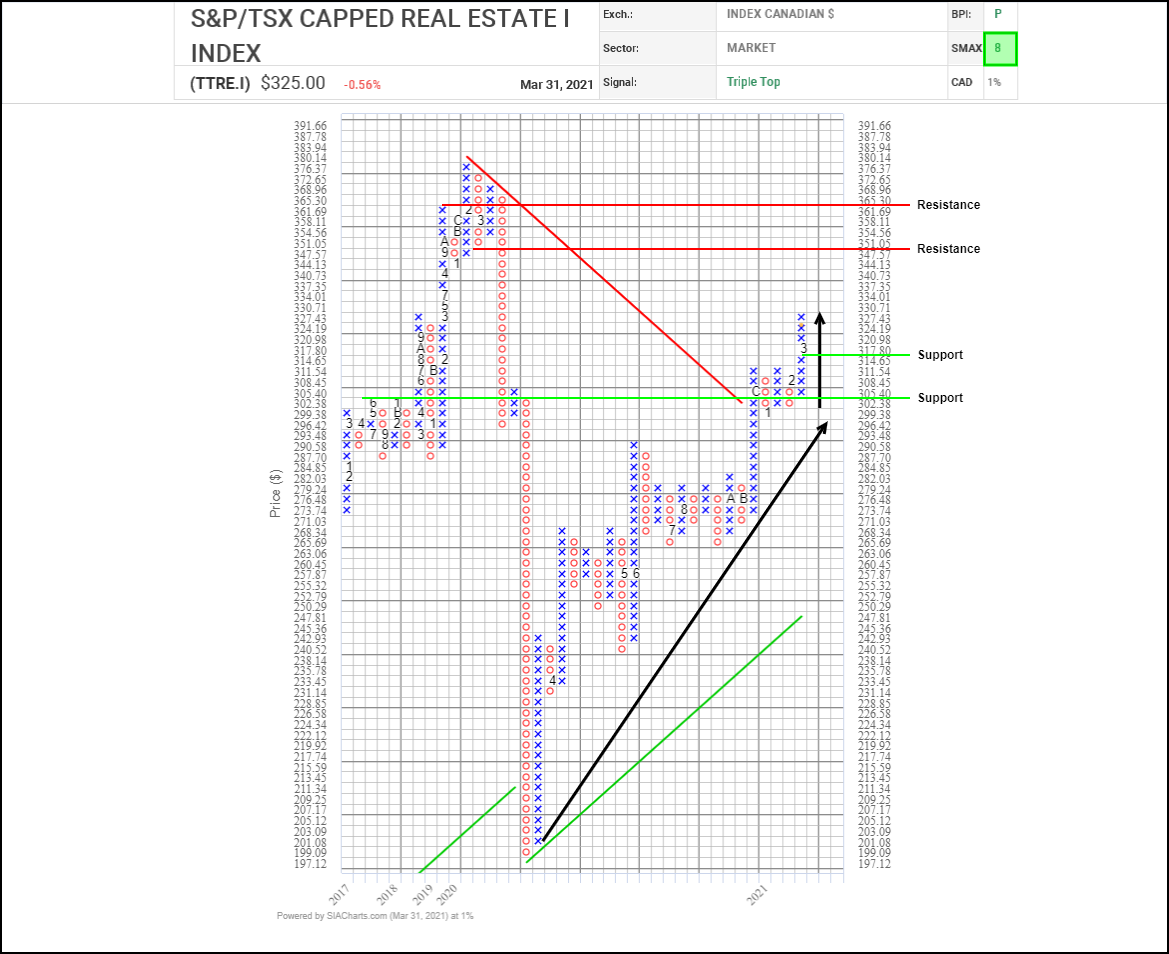 Although real estate has historically been seen as an interest rate sensitive sector, in the last year, it has been more sensitive to economic conditions. A year ago, the real estate sector in North America collapsed as widespread lockdowns suddenly changed how and where people worked, put tenants under stress and raised serious questions about how demand for commercial real estate (location and amount) may change in the future.

Since bottoming out a year ago, the S&P/TSX Capped Real Estate Index (TTRE.I) has been steadily recovering in a step pattern of rallies followed by periods of consolidation at higher levels. Last summer, the index staged a bullish Quadruple Top breakout and in November it snapped a downtrend line. Recently, the index has embarked on a new upleg completing a bullish Triple Top breakout.

Even with these bullish signals emerging, TTRE.I remains in recovery mode still well short of its early 2020 peak near 380. Yesterday, the index finished at 325 with next potential upside resistance near 350 where a vertical count, round number and previous column support converge, followed by 365 where a previous column high and a horizontal count converge. Initial support appears in the 310-315 area between a retest of a recent breakout point and a 3-box reversal. 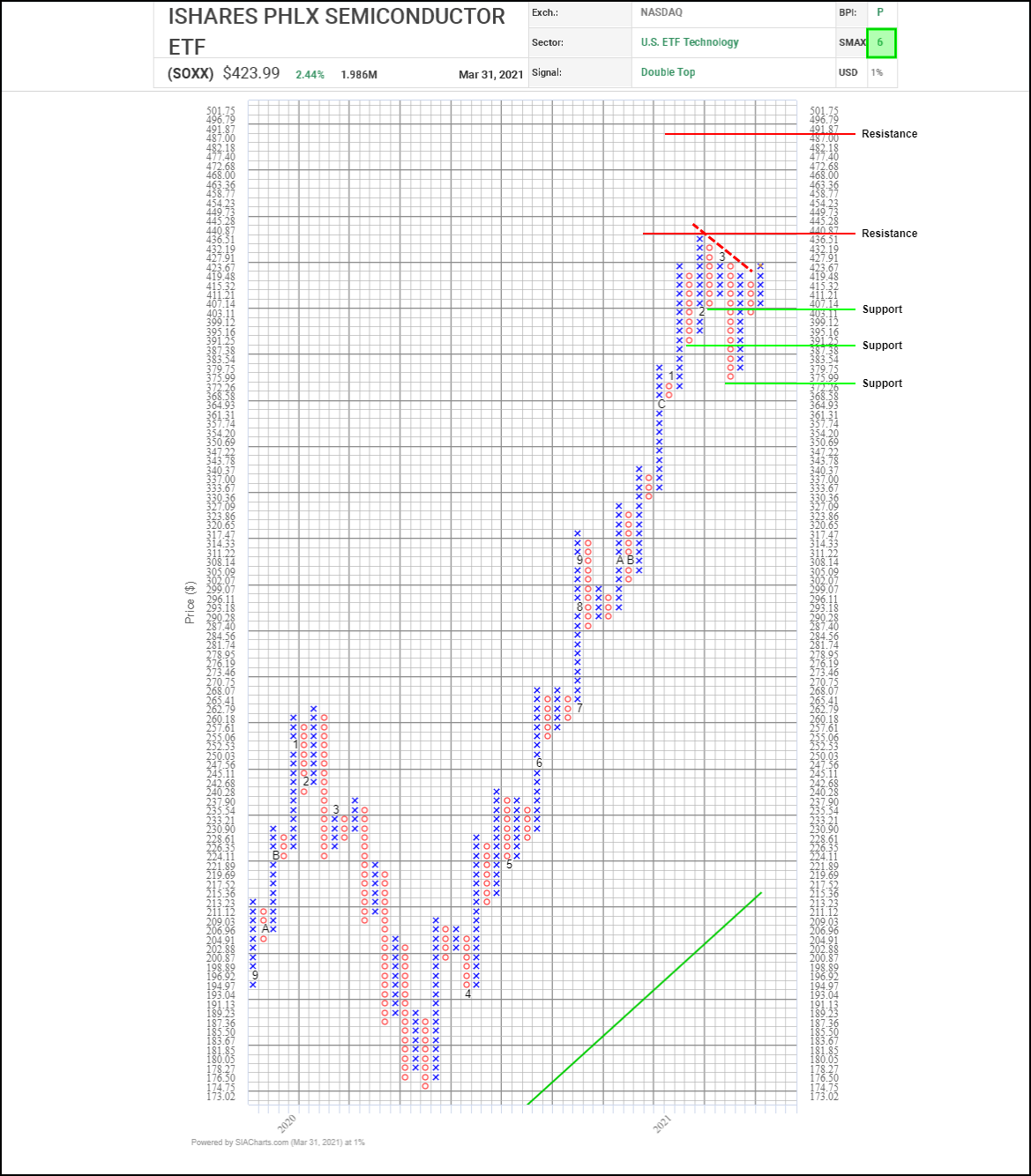 The semiconductor sector was one of the early leaders in the current market uptrend, having clawed back all of its bear market losses by June and continuing to climb through to February. For much of the last five to six weeks, the chip space has been struggling and for a time after a bearish double bottom breakdown, it had appeared that the sector was entering a new downtrend as capital rotated away from early growth leaders into value catchup plays.

Action in the last week for the iShares PHLX Semiconductor ETF (SOXX) has been more encouraging. The sector ETF has bounced back and some individual semiconductor stocks have started to climb back up the rankings in the SIA S&P 500 Index and SIA NASDAQ 100 Index reports.

SOXX has snapped a downtrend line and completed a bullish Double Top pattern, calling off the recent double bottom. At this point, it appears that the trend for SOXX has shifted from upward to sideways and that the recent pullback was a correction rather than the start of a downtrend.

For SOXX to resume its longer-term uptrend it would need to break out over its previous high near 440.85. Should that occur, next potential resistance may appear near 492.00 based on a combination of vertical and horizontal counts. Initial support appears near 403.10 based on a 3-box reversal with more possible near 387.40 and the recent low near 372.25.