The first week of earnings season has been somewhat odd. Overall, initial results have been coming in significantly stronger than expected, but the reaction has been somewhat mixed. The Dow and S&P eked out marginal new highs last Friday, Monday and Tuesday saw stocks tumble as indices corrected, then on Wednesday, North American stocks resumed their upward course. It appears that equities are still working through a rotation between the stay-at-home sectors which outperformed last year and the reopening/catchup sectors which have been on the move lately. The reopening groups have had a bit of a setback after the J&J vaccine was paused in the US over clotting issues, but then regained traction when Europe indicated J&J vaccinations could resume with a warning. The US is expected to decide on what to do about J&J later this week which could impact sentiment once again.

In earnings news, US banks have been having a strong quarter and in several cases, have freed capital that had been tied up on loan loss provisions, a clear sign of a strengthening economy, and the potential for dividend payments to resume this summer. On the other hand, the biggest disappointment so far has been Netflix which struggled to keep subscriber growth going after last year’s big bump. Earnings season continues to ramp up with many seniors in the Technology, Energy, Mining, Pharmaceuticals, Consumer Products and Industrials sectors scheduled to report results by the end of the month.

Perhaps the biggest vote of confidence so far came yesterday from the Bank of Canada, who slowed their asset purchase program by 25% to $3B per week from $4B weekly. The bank also moved up its forecast for when enough of the excess capacity in the economy may be absorbed to enable it to start raising interest rates forward to the second half of 2022 from its previous forecast of 2023. Most interestingly, this confidence from Canada’s central bank comes at a time when several provinces are in lockdown and vaccination efforts are lagging well behind the US. This decision sparked a rally in the Canadian Dollar and may help to shore up confidence in non-commodity related Canadian equities.It remains to be seen if the Bank of Canada decision may reflect growing pressures on the Fed to start easing back on stimulus at its meeting next week. Fed speakers have been talking dovishly on interest rates lately, but they could still tweak other support measures or asset purchase levels, like they did last month by ending the break on capital requirements it had given US banks a year ago.

Between earnings reports and central bank meetings, the coming week looks to bring a lot of news for investors to consider. Also, flash PMI numbers are out on Friday.

In this issue of Equity Leaders Weekly, we look at resurgences in International Equities and in the price of Gold. 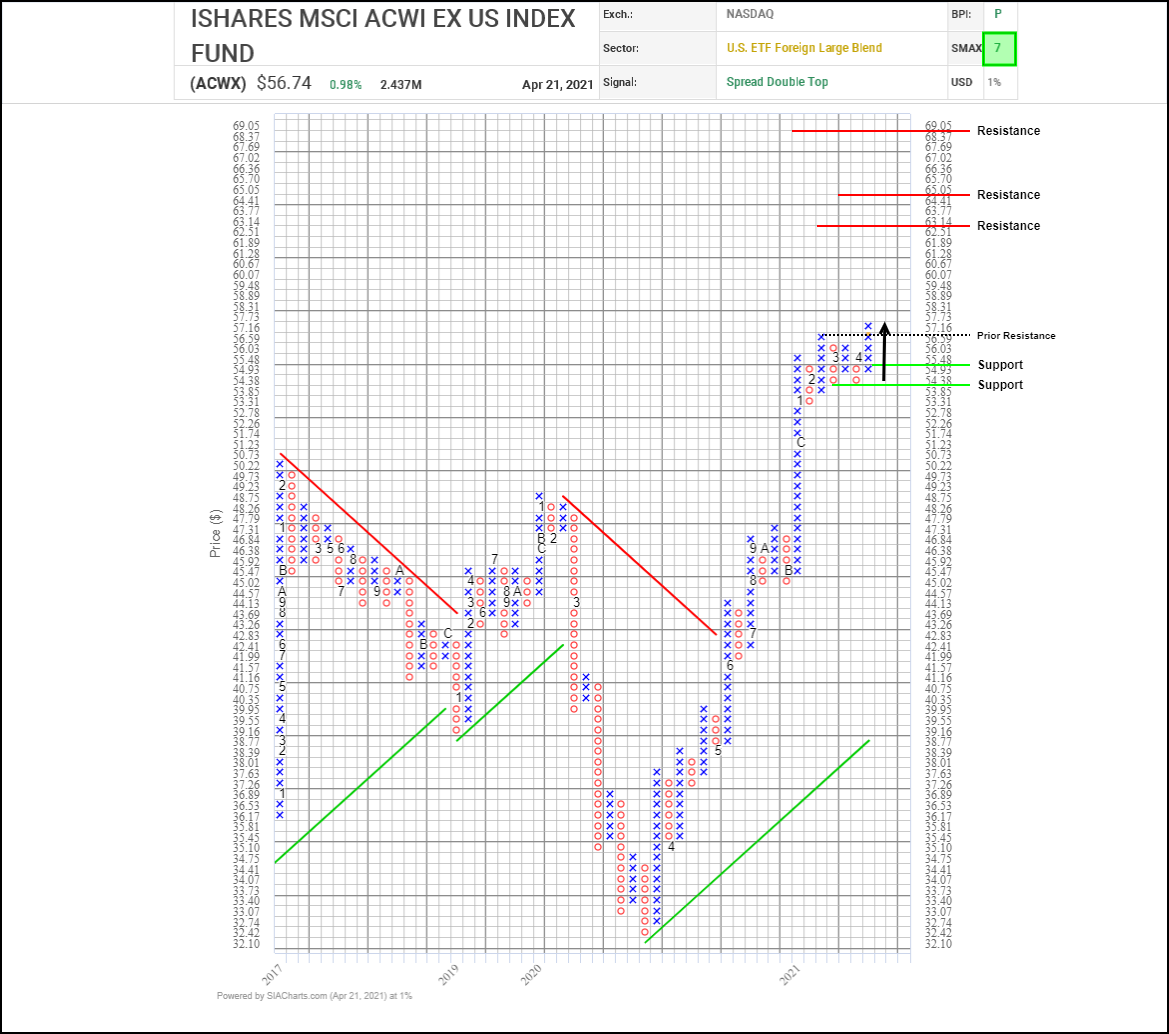 ACWX is the world index excluding US stocks, which gives us an indication of sentiment toward International Equities and world market breadth. While generally trending upward for a year now, ACWX staged its biggest high pole rally back in December-January when it completed its recovery and broke out to its highest levels in at least three years. ACWX then levelled off to consolidate gains for about two months, as is common after a big rally at the same time that NASDAQ/momentum stocks in the US and commodities also consolidated.

This week, ACWX has broken out to a new high, clearing $57.50 and completing a bullish Spread Double Top pattern to signal the start of a new advance This move appears quite significant because it suggests that stocks outside of the US are also looking past COVID Wave 3 and that investor anticipation of wider re-openings as the year progresses is not just limited to North America.

Based on horizontal and vertical counts, next potential upside resistance tests on trend appear near $63.15, $65.05, and $69.05. Initial downside support appears near $54.95 based on a 3-box reversal. 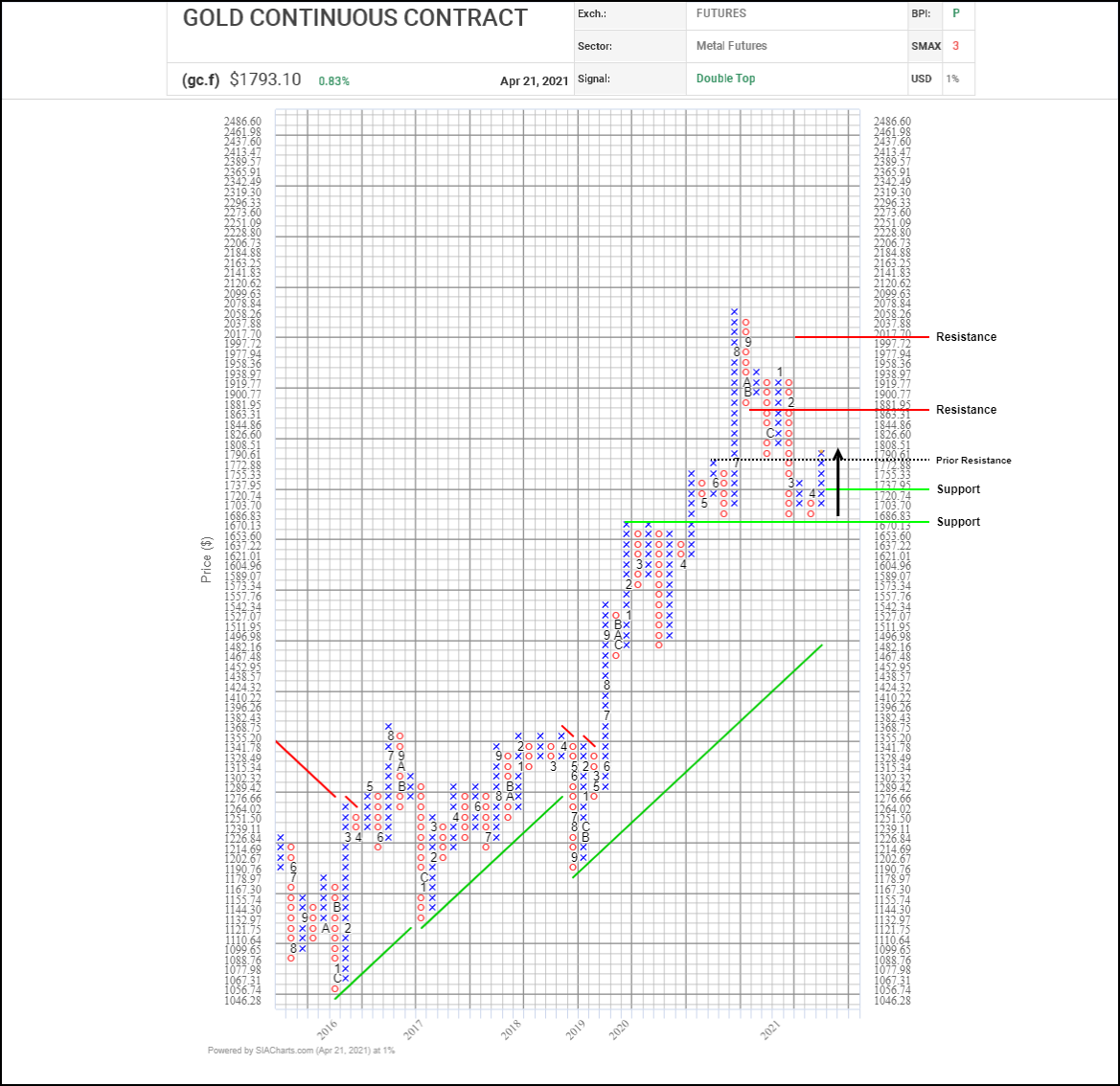 Since peaking above $2,000/oz last summer, gold has been steadily backsliding. Recent trading, however, suggests that having successfully established support in the $1,670 to $1,685 area with a successful retest of a previous breakout point. Gold’s resurgence this month can be mainly attributed to two recent headwinds which had pushed it lower through February and March finally fading. Gold’s nemesis, the US Dollar, has started to fade with the 10-year treasury note yield’s recovery march pausing. Also, the siphoning away of alternative currency demand into cryptos appears to be fading as well with Bitcoin and others starting to fall back.

Meanwhile, commodity prices have started to climb once again led by lumber and copper plus breakouts in grains such as corn and soybeans. This action suggests that inflation pressures may be starting to build again which could create a tailwind for precious metals as an inflation hedge. Gold may continue to attract attention in the coming week with several central banks including the ECB, Fed and BOJ set to comment on monetary policy and economic conditions. It will be interesting to see if they follow the Bank of Canada’s lead, or if they remain dovish. In addition, several gold miners are scheduled to report earnings next week which may also attract attention to the precious metals space.

This week, gold has regained $1,790, retaking a previous breakdown point to confirm the start of a new upswing and a recent bullish Double Top breakout. Initial upside resistance appears at a previous column low near $1,882, then the $1,000 to $2,015 area where a round number and a horizontal count converge. Initial support appears near $1,720 based on a 3-box reversal.