Equity markets continue to grind their way sideways. With summer approaching and corporate news in between earnings seasons, investors appear to be marking time waiting for the next big catalyst to appear.

Yesterday’s Fed decision was uneventful for equities and confirmed that the US central bank is prepared to continue providing monetary support to the economy and remains comfortable with letting inflation run a bit above average for a while. The Fed did raise its GDP and inflation forecasts and moved up its forecast for the first-rate hikes to 2023 from 2024. This news sparked a rally in the US Dollar but the 10-year treasury note yield only responded briefly before slumping back down and stocks have dropped moderately, less than 1.0% in total so far. The market reaction suggests that investors think the Fed likely won’t be adding any more stimulus and perhaps could start cutting back later in the year, maybe announcing a change in thinking at its Jackson Hole conference in August.

There are a few more central bank meetings in the coming week. The Swiss National Bank and the Bank of Japan have been in the US full stimulus camp, while the Bank of England has been hinting about cutting back on stimulus but the timing of that remains unclear. It’s unclear which way the Peoples Bank of China is leaning.

Evidence to support many central bankers thinking inflation is transitory can be seen in commodity prices which have continued to backslide into June, particularly, lumber, copper, platinum, rice, soybeans and other grains. As with equities, it appears that investor anticipation of a strong demand recovery for resources may have become a bit too exuberant earlier this year, leaving highly valued markets in a position where they may need to consolidate through the summer to digest previous advance.

There has been some differences in performance within equity markets as well. While broad indices in the US have levelled off, some of the areas that have historically been late-stage outperformers like emerging markets and small caps continue to show strength. Some sectors which retreated earlier this spring appear to be bouncing back, while some sectors like homebuilders and transports appear to be going into corrections along with commodities.

Based on this differing action across equity markets, it appears that we may be heading into a sideways summer of rolling corrections where gains in some areas offset losses in other areas, highlighting the importance of stock/sector selection and relative strength.

Outside of the central bank meetings the coming week is pretty quiet for corporate and earnings news with the main events being US housing data, Canada retail sales, flash PMI reports and the US bank stress test results (which may enable them to resume dividends and buybacks this summer) between next Tuesday and next Thursday.

In this issue of Equity Leaders Weekly, we explore differences in investor sentiment within equities with a look at the US homebuilding sectors and at emerging markets. 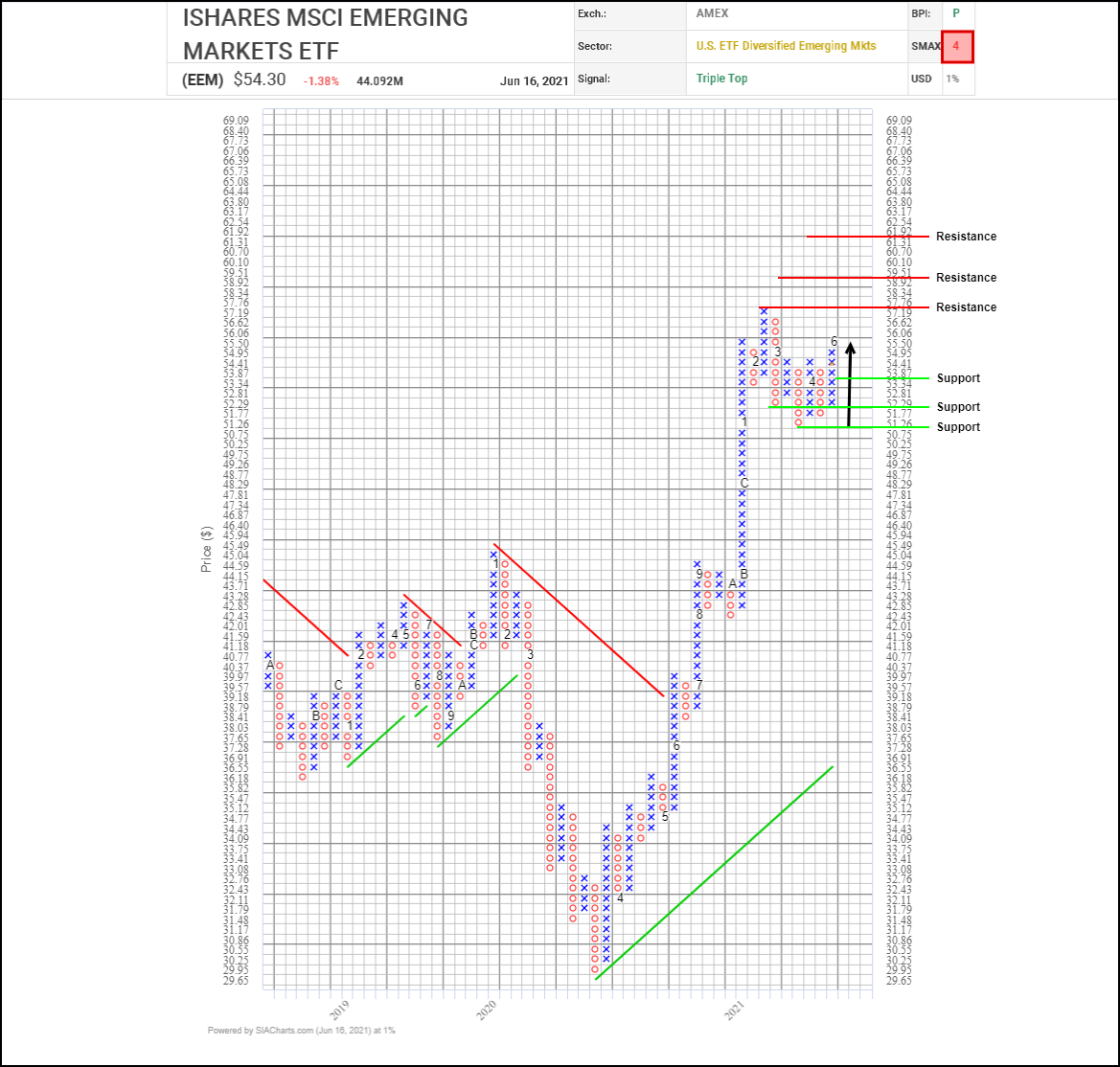 Action in emerging markets is often seen as in indicator of how aggressive or defensive investors are, or how willing they are willing to take on country/currency risk in order to chase potentially higher returns. Some emerging markets also are significant resource exporters, so the rise and fall of commodity prices can also have an impact on emerging market returns.

The iShares Emerging Markets ETF (EEM) staged a strong charge between March of 2020 and February oof 2021. The ETF then staged a correction in March and regained its footing in April. This month, EEM has completed a bullish Triple Top breakout indicating that the recent consolidation phase has ended and accumulation has resumed, but it would take a breakout over the February peak near $57.75 to confirm the start of a new upleg.

Gains across emerging markets has been quite widespread with climbing countries including Brazil, India, Russia, Argentina, Mexico, Poland, and Nigeria. Asia Pacific emerging markets like China and Taiwan have been lagging behind suggesting that renewed interest may be related more to resource prices than technology or manufactured goods exports. 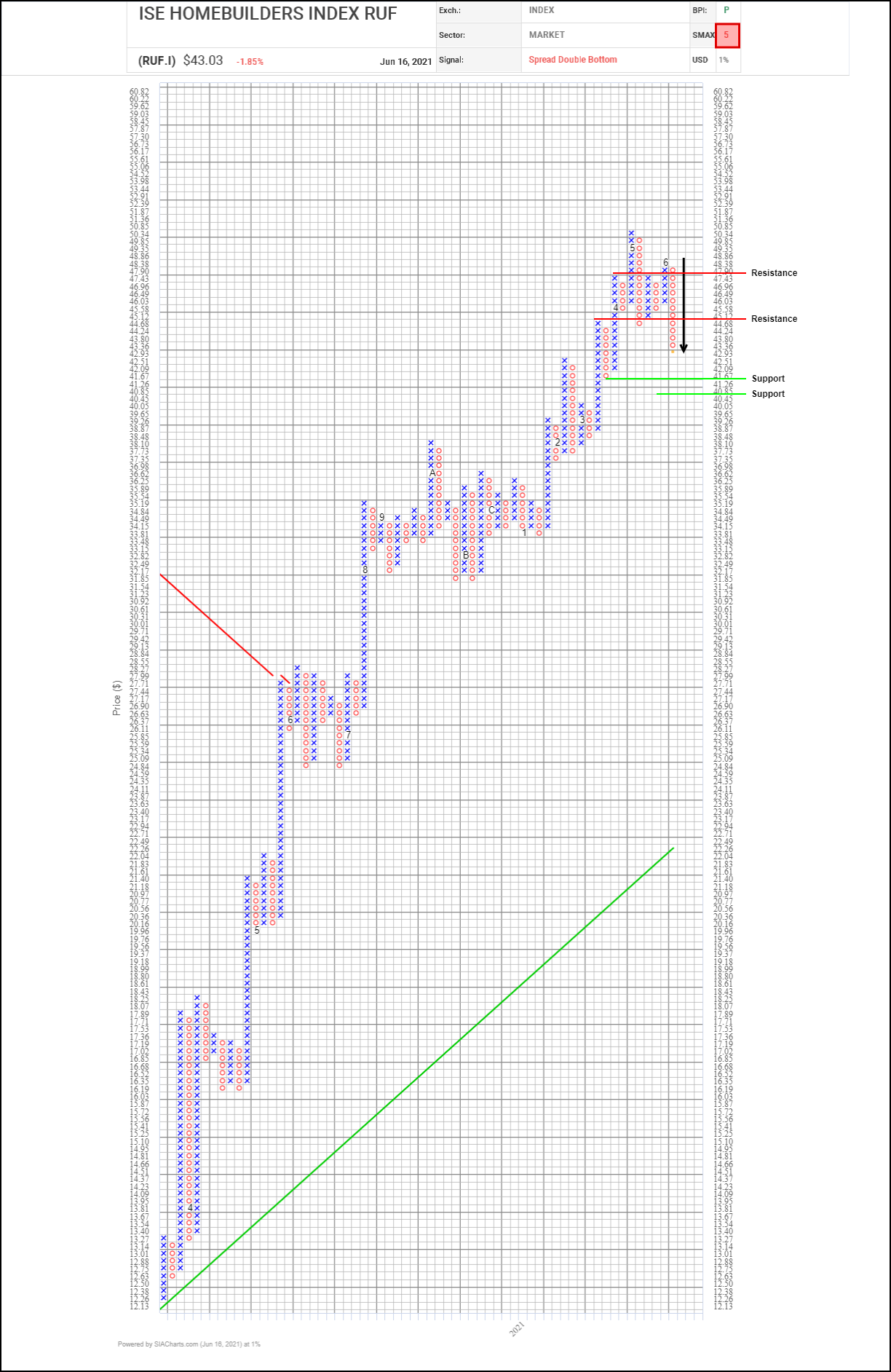 Construction & homebuilding is one of the key sectors in the US economy and action in the industry along with movement in related stocks can be seen as a key indicator of consumer and market sentiment.

The ISE Homebuilders Index (RUF.I) rallied out of a consolidation zone in January and continued to climb into May. Since peaking a month ago, the sector has come under pressure with RUF.I starting into a correction with the completion of bearish Double Bottom and Spread Double Bottom patterns. With a bearish SMAX of 5, RUF.I is exhibiting weakness relative to the asset classes.

Some factors that potentially could be weighing on the sector include the soaring price of lumber which could impact profitability if rising costs can’t be passed on, the potential impact of rising house prices on demand if lumber costs are passed through, the ability to meet production targets if there are lumber shortages, and questions about sector momentum after the last two US monthly construction spending reports showed growth but less growth than the street had hoped.

The monthly US new home sales report is due on Wednesday, which may give further insight into business conditions for the sector. Its also possible that recent weakness may be seasonal as RUF.I also suffered pullbacks in the Junes of 2018, 2019 and 2020.