Its not uncommon for the latter part of June and the early part of July to be a quiet time of the year for world markets. With the school year ending, summer vacations starting, and the usual end of quarter lull for earnings reporting, investors often have their attention turned elsewhere at this time of year. In recent weeks, it has become apparent that having staged a massive rally up off of the March 2020 lows, broad equity market momentum has slowed and a sideways trend has emerged while equities digest previous gains and wait for valuations to catch up. At the same time a look at sector action in both equites and commodities and commodities suggests that we could be in for a “summer of sideways” amid a series of rolling takedowns and recoveries with different sectors heading in different directions at different times. For example, three months ago a theme of capital rotation emerged with investors taking profits in stay-at home-beneficiaries and moving into sectors that could benefit from reopening, but now that rotation appears to be reversing a bit (more on that later in this report).

Similarly in commodities, while energy contracts continue to climb, lumber, platinum and many of the grains and softs have come under heavy pressure and copper has bounced back and forth between sides.

Even though North American trading over the next two weeks may be quietened by holidays in Canada on Thursday the 1st and in the US on Monday the 5th, there are still a few economic announcements that may attract attention from investors. Later today, US bank stress test results are due which the Fed has previously indicated could lead to passing banks being allowed to resume dividend payments and share buybacks this summer. With the turn of the quarter, the only other corporate news of note could be if there are any profit warnings, but confession season has been really quiet the last few quarters.

Wednesday June 30th, brings Canadian monthly GDP which could be significant in showing the impact of recent lockdowns on the economy in the wake of dismal Canadian April retail sales announced yesterday. The last day of the month and the quarter also brings US ADP payrolls and Chicago PMI. July kicks off with two busy days for data with manufacturing PMI reports from around the world and US construction spending due on Thursday July 1st, followed by US nonfarm payrolls on Friday July 2nd. Service PMI reports from around the world come out on Monday July 5th.

In this issue of Equity Leaders Weekly, we look at the internet and transportation sectors as examples of capital rotation within North American Equity Markets. In particular note how the theme of significant divergences continues to play out, which can impact indices differently depending on their composition. 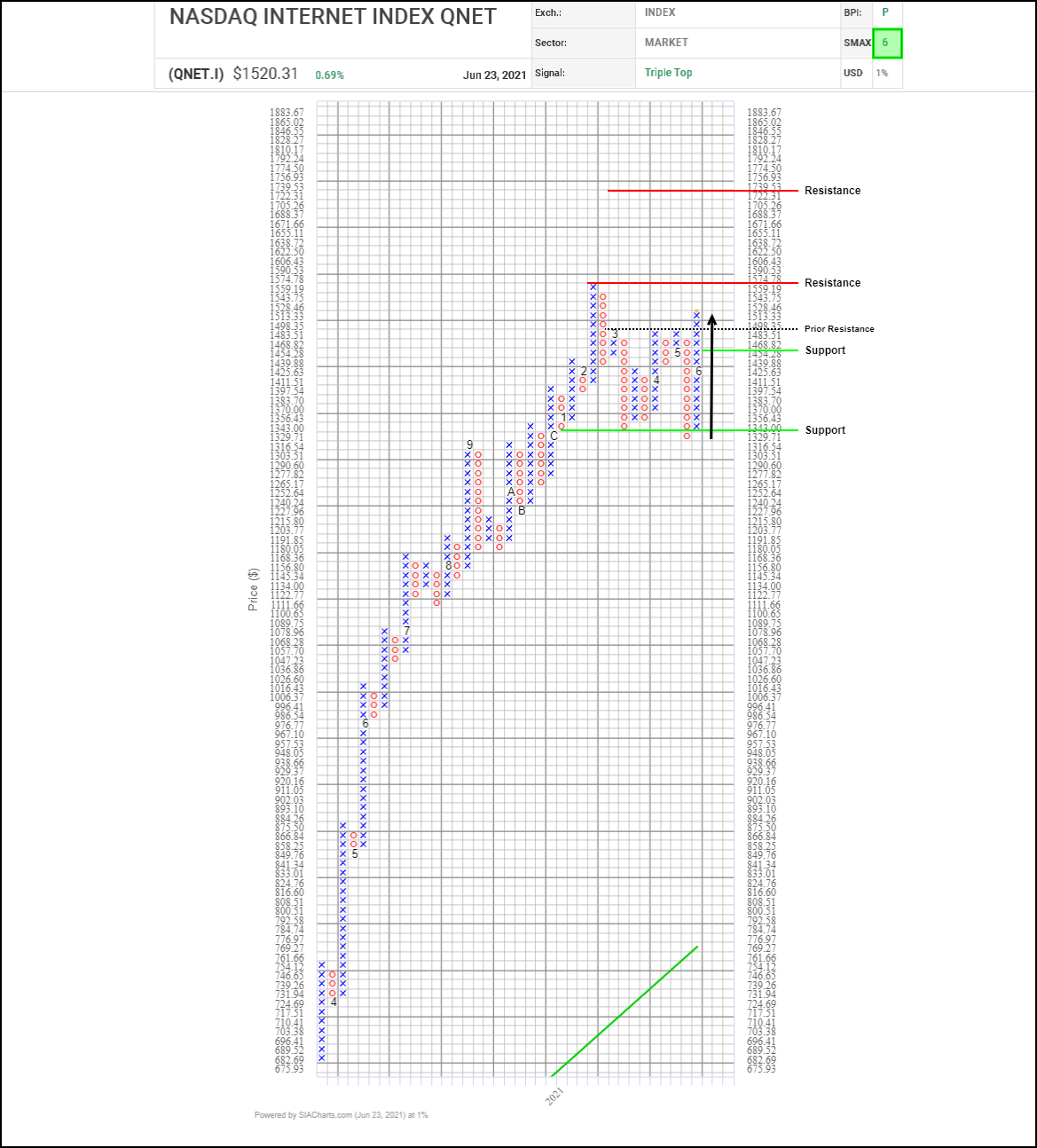 After leading the charge up out of the March 2020 market bottom through the rest of the year and through the winter of 2021, the NASDAQ had a correction in March-April. Since then, the NASDAQ, often synonymous with sentiment toward growth and technology/communications stocks, has been steadily recovering and last week achieved a new all-time high at the same time that the mega-cap/value-oriented Dow Jones Industrial Average was starting to roll over.

The recovery in the NASDAQ has been driven by rebounds in a number of the key subgroups, including the NASDAQ Internet Index (QNET.I) and the NASDAQ Biotech Index (NBI.I), both of which suggest renewed interest in growth and that the correction in stay-at-home stocks has run its course.As the chart shows, QNET.I peaked back in February and retreated through March. In April the sector stabilized and a sideways trend started to emerge. A breakdown attempt in May failed and turned out to be a head fake confirming support. Since then, the sector has come under renewed accumulation. A bullish Triple Top breakout over 1,500 has signalled the start of a new upswing which could challenge the previous peak near 1,575 which could decide whether a new upleg is beginning of if this is just an upswing within a continuing sideways trend. Investors interested in technology may also monitor the Philadelphia Semiconductor Index (SOXX.I) which has been approaching the top of its current trading range as well. 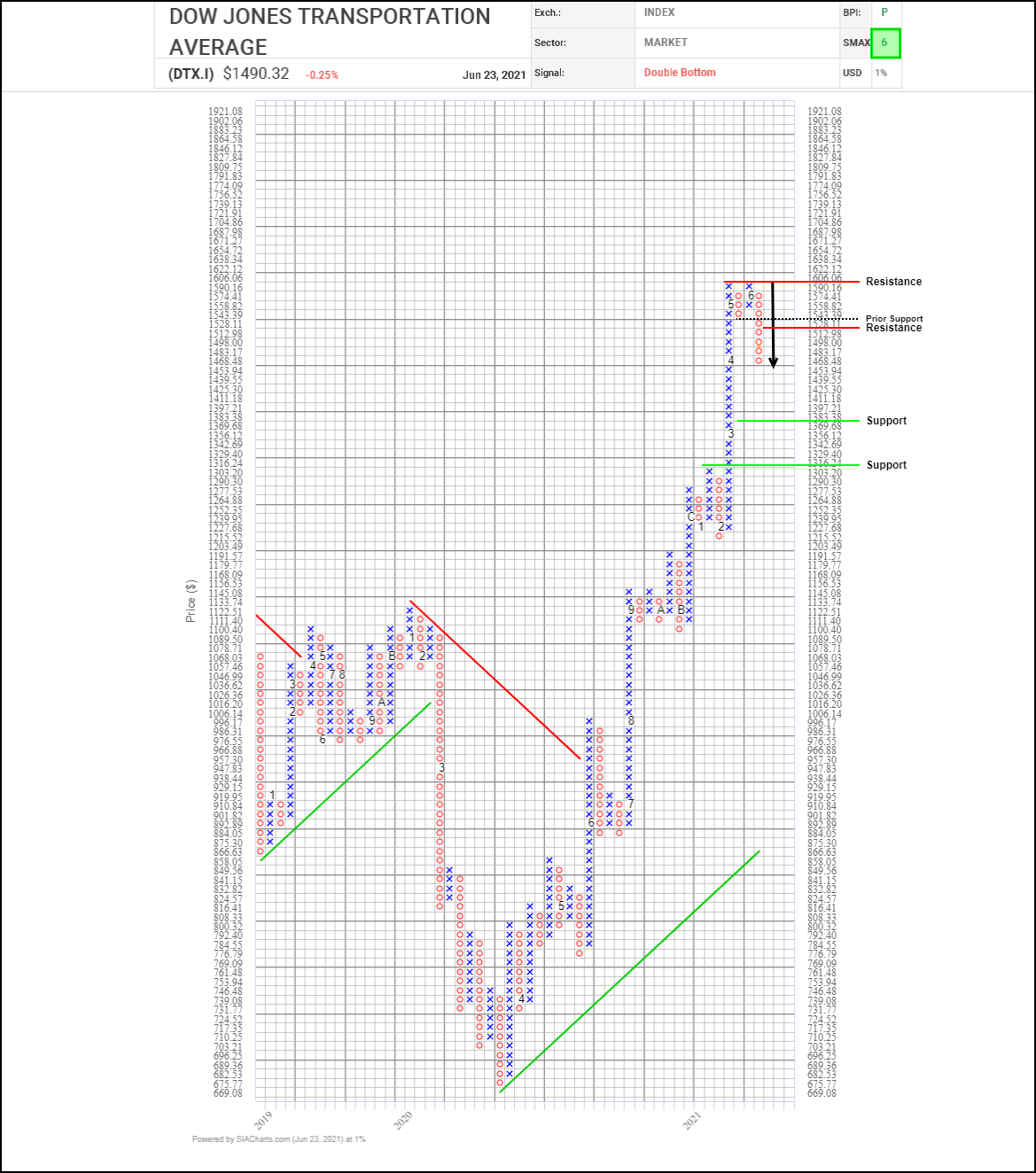 While the NASDAQ making it back to new highs can be seen as a positive sign for investor sentiment, it may be a bit early for investors to pop the champagne, because there have been some concerning signs from other parts of the market.

For followers of Dow Theory, the last week has been disconcerting because the Dow Jones Industrial Average (DJI.I) and the Dow Jones Transportation Average (DTX.I) both staged bearish Double Bottom breakdowns on 1% point and figure charts, an ominous sign, particularly with these two indices confirming each other’s breakdowns.

The breakdown in the Transportation Average, which has also coincided with a downturn in several commodity groups, may be particularly significant as a sign that reopening anticipation may be fading. The sector had benefitted earlier this year from expectations that subgroups like airlines and cruise lines could recover this year, but recent weakness suggests that investors may have become overly enthusiastic on indications that reopening may not be as strong or could be more uneven than previously thought.

While the US domestic economy has pretty much fully reopened, Canada, Europe and other parts of the world are lagging behind and the UK recently extended its lockdowns. Meanwhile even in the US reopening has been bumpy with American Airlines recently paring down and reorganizing its schedule as it struggles to meet resurgent demand.

With a drop below 1,525 earlier this month, the Dow Jones Transportation Average (DTX.I) completed a bearish Double Bottom breakdown, signalling the start of a downturn. Next potential downside support appears near 1,370 based on a horizontal count. Initial resistance appear near 1,528 based on a 3-box reversal.