The heart of this quarter’s earnings season has arrived, results on balance have been very strong with many reports coming in well above analyst expectations and stock markets…are not doing very much. Major indices have failed to advance very far suggesting that the gains of the last year have already priced in strong expectations.

It’s also possible that stocks may be getting priced to perfection with the balance of risks shifting to the downside. COVID Delta wave continued to weigh on reopening-sensitive sectors, and the prospect of increasing government intervention in Chinese companies sent the Hang Seng crashing down 8% in two days.

Although investors don’t appear ready to send stocks higher at the moment, governments don’t appear ready to let stocks slide either. After two days of sharp declines in Chinese equities, China’s government did step in to calm the waters adding some quick cash to its financial system. Meanwhile at yesterday’s Fed meeting, not only did the US central bank talk up the economy, it reiterated that it is comfortable with higher inflation for a while and that it has no plans to reduce stimulus (although it may revisit this stance at coming meetings). Perhaps most significantly, the Fed introduced two new standing repo facilities (one for domestic transaction, one for foreign transactions) to keep money markets working smoothly.

Significant capital flows and relative strength rotation continues to roll though world markets. This week, commodity prices continued to rebound from recent weakness, particularly livestock, crude oil and softs. Cryptocurrencies also roared back to life with Bitcoin taking another run at $40,000. On the other hand, defensive havens like gold and US bonds drifted aimlessly.

Most importantly, the Russell 2000 SmallCap Index successfully retested 2,100 support once again, keeping its sideways trend intact and containing the bears. The technology and communications sensitive NASDAQ Composite continued to climb along with the large-cap Dow Jones Industrial Average. Over the next week or so, over 2,000 North American listed companies are scheduled to report results. In terms of sectors, Big Tech and Big Pharma are joined by Big Oil and Big Insurance along with automotive, apparel, video game and many other groups. While the focus in the US starts to turn from big cap to mid and small cap companies, the four days following Monday’s Canadian holiday brings results from a number of the largest companies north of the border.

The turn of the month also brings a number of economic reports starting with today’s US GDP report through PMI reports early in the week to the big US nonfarm payrolls and Canadian employment reports next Friday.

In this issue of Equity Leaders Weekly, we look at the Biotechnology and Industrials sectors as examples of ongoing changes in equity sector leadership as we move through the summer. 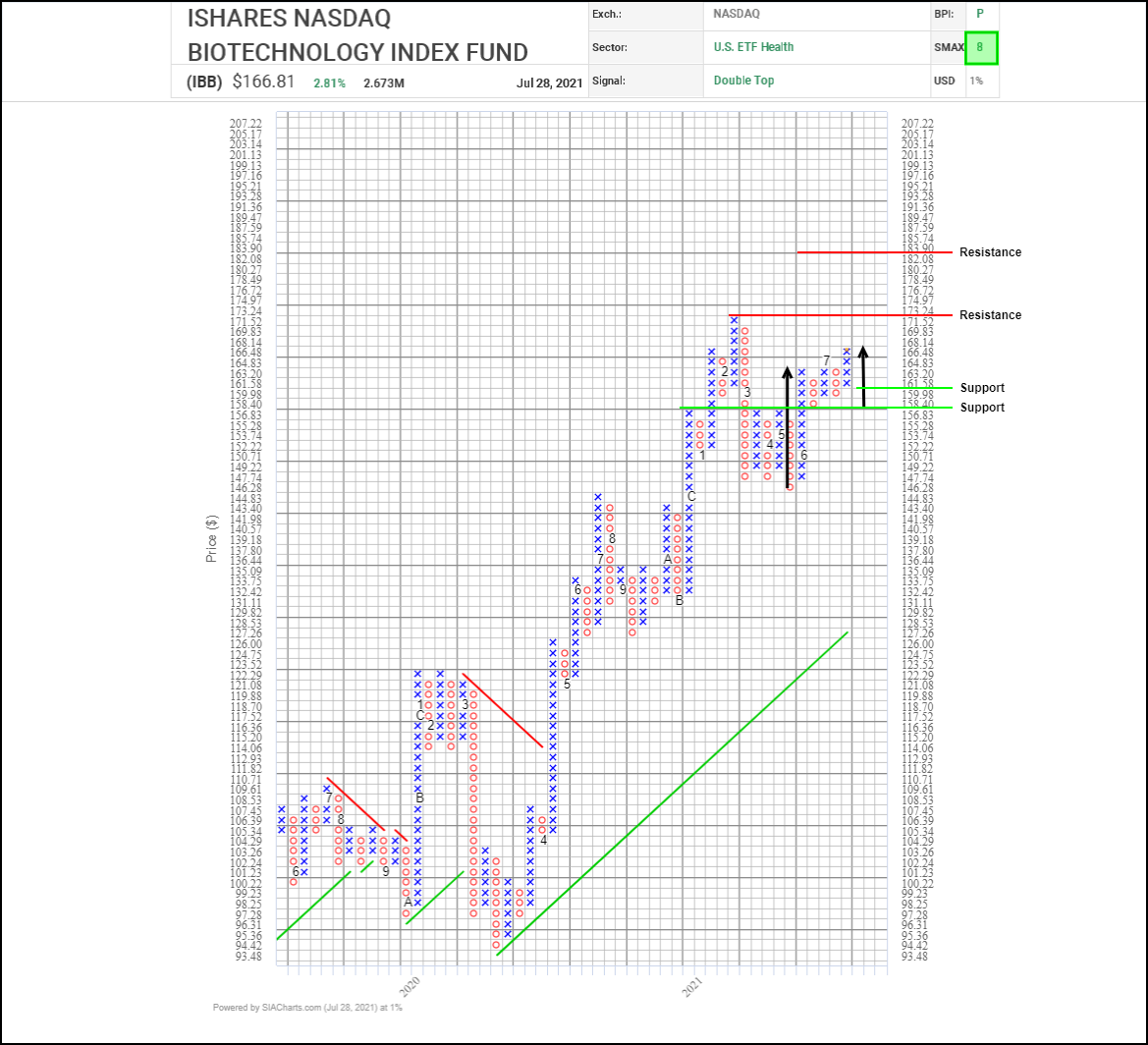 The Biotechnology sector was one of the groups which led the initial market recovery back in the spring of 2020, erasing all of its bear market losses and reaching new highs in April of 2020. The biotech sector continued to climb through to February, then retreated along with other sectors that had led in the early stages of the recovery such as technology and communications and groups which benefitted from the pandemic.

Since bottoming out in May, the biotech sector has resumed its upward course and continues to strengthen. Moving into the summer, health care has been outperforming in general which could be seen as a defensive shift, but biotech climbing is particularly interesting because it was generally considered to be the most volatile part of health care before cannabis stocks came along. As a result, gains by he biotech group suggest that investors are rotating into health care based on growth anticipation and are willing to take on some risk, rather than looking at health care as a defensive haven.

The iShares NASDAQ Biotech Index Fund (IBB) staged a bullish Triple Top breakout back in May which remains active. This month, the shares have climbed above $166.50 to their highest level since February, indicating renewed accumulation. Initial upside resistance appears at the February peak near $173.25, followed by $183.90 based on a vertical count. Initial support appears near $160.00 based on a 3-box reversal. 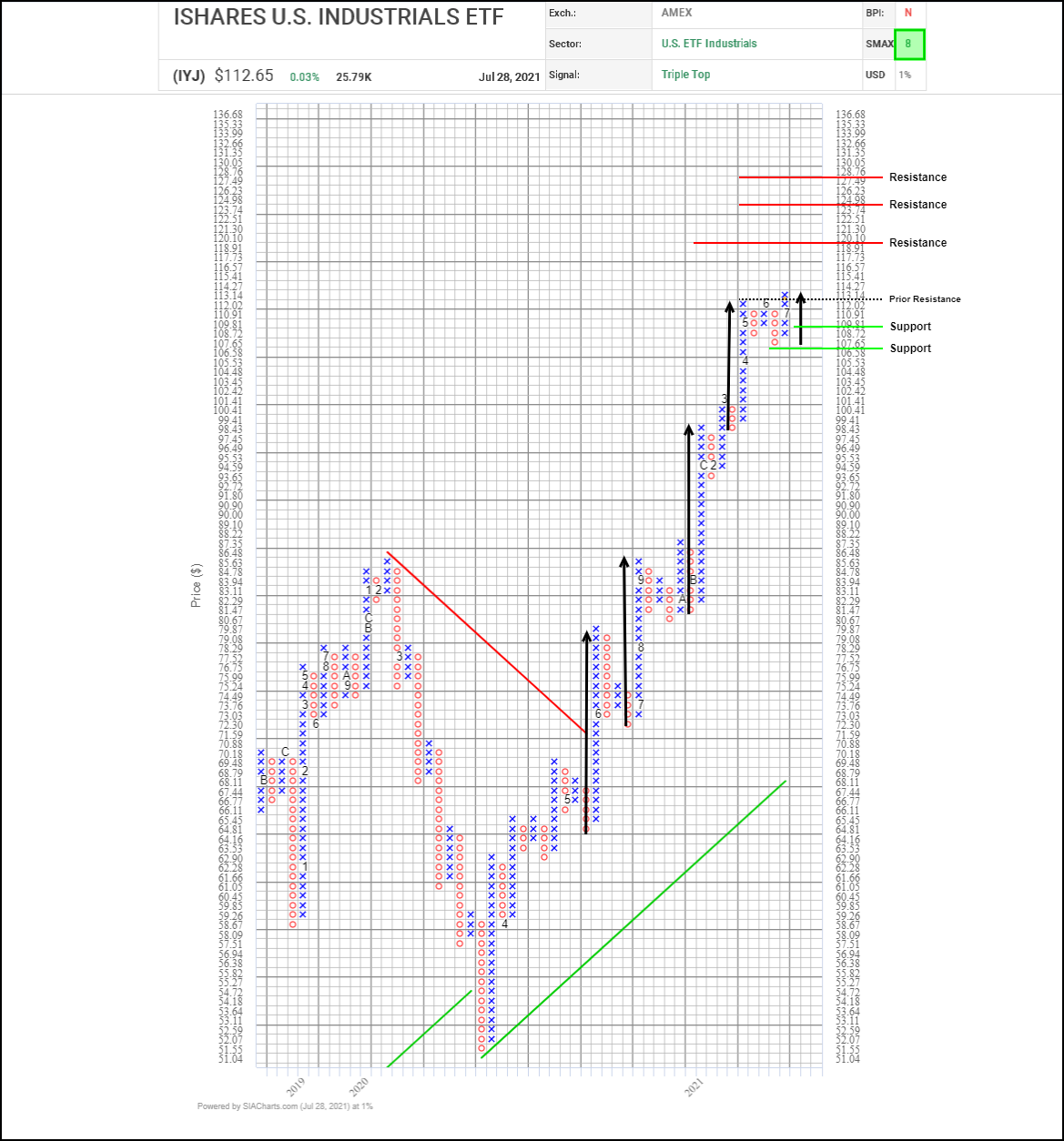 Since the overall market bottomed out in March of 2020, the Industrials sector has been steadily climbing in a step pattern of rallies followed by consolidation at increasingly higher levels. This pattern has continued into 2021 with the sector rallying through April and May, consolidating through June and now breaking out to the upside once again.

What is most interesting about this breakout is that it is coming at a time when the Transportation subgroup, which had helped to propel the spring advance, has been struggling. This indicates that other subgroups within Industrials have taken up the torch and have been strong enough to carry the whole group higher even with the transports dragging. Subgroups within Industrials benefitting from rotation and exhibiting relative strength include Engineering & Construction, Aerospace & Defense, Manufacturing, Conglomerates, and Diversified Services.

The iShares US Industrials ETF (IYJ) recently broke out over $133.15 to a new all-time high, completing a bullish Triple Top pattern and signaling the start of the latest in a series of advances. Vertical and horizontal counts suggest potential upside resistance on trend near $120.10, $125.00, and $128.75. Initial support appears near $112.00.