The seasonal September slide for stocks that started last week has continued into this week. Although US markets bounced back a bit yesterday, overseas markets continued to trend downward. Much of the recent malaise has been due to a lack of positive catalysts over the last few days.

Economic news continues to point toward stagflation with Chinese retail sales and industrial production coming in below expectations while consumer price inflation reports for Canada, the US and the UK were either still above 4.0%, up from last month, above expectations, or a combination of these factors.

While equities have struggled, commodities have roared back to life. The negative impact of Hurricanes Ida and Nicholas on Gulf of Mexico production has carried through into falling US oil inventories sparking big rallies in crude oil, natural gas and gasoline. Copper has also started to bounce back, but grains and platinum, the latter of which is likely due to auto production being curtailed by chip shortages, remain under pressure.

News flow starts to pick up in the coming week with several central banks holding meetings. In light of the soft Chinese data, the PBOC looks unlikely to do much at its meeting. Investors may look to Wedesday’s Fed meeting for any signs of whether Governor Powell has changed his dovish stance since last month’s Jackson Hole Conference. The Bank of England may also attract attention as it has hinted at tapering earlier this year, UK inflation pressures have been increasing and the European Central Bank hinted toward tapering later this year at its own meeting last week.

Canada’s federal election is on Monday with polls indicating a close race between the Liberals and Conservatives that could potentially end in another minority government situation. Unless there is a big surprise, the impact on broader markets may be negligible.

Policy differences between the parties mean the results could have a significant impact on specific sectors including real estate, energy, and COVID/Vaccine Passport impacted sectors such as airlines, cinemas, restaurants, hotels and others.

Other notable upcoming economic reports include today’s US retail sales report and next Thursday’s flash PMI reports. There are a few earnings reports also due in the coming week headlined by FedEx on Tuesday, plus Costco, Nike and Blackberry next Thursday.

In this issue of Equity Leaders Weekly, we look what recent technical action in Chinese stocks could mean for global equities, and at renewed interest in the uranium market. 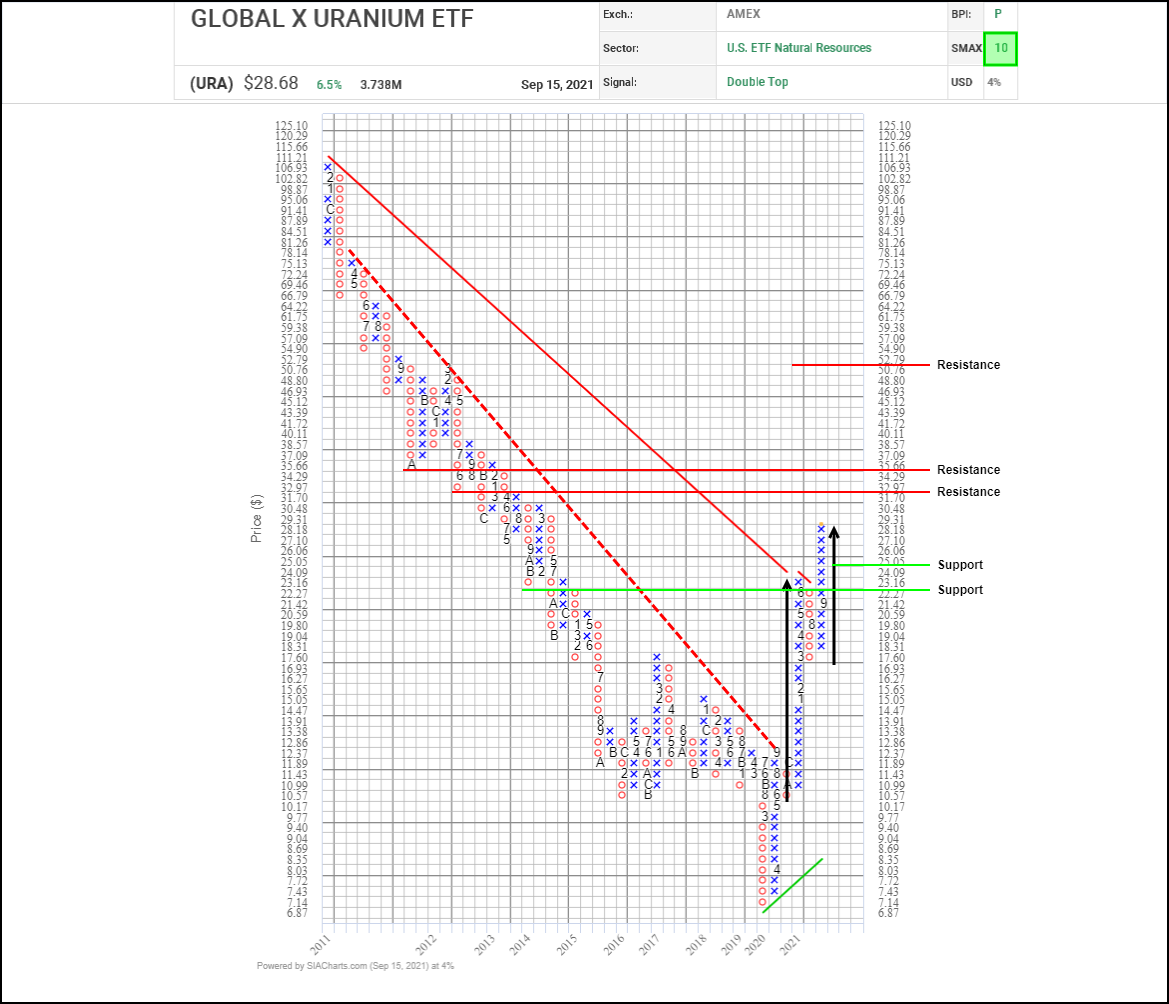 You may recall in last week’s issue of the Equity Leaders Weekly, we highlighted that investor interest in non-carbon alternative energy production has started to increase using Wind energy as an example. Uranium has also been attracting more attention lately and its recovery has really burst into prominence this week.

There also have been sector specific factors combining to attract renewed attention to uranium lately. Sprott’s Uranium Royalty Corp (UROY) has been accumulating physical uranium for several weeks now. This move has attracted attention from the Reddit/Meme trading group in the last week which could be fuelling a short squeeze.

Since Uranium Royalty Corp has a very limited trading history, we look to the Global X Uranium ETF (URA) for an indication of how strong the current rally has been, using a 4% chart. URA spent nearly the entire decade of the 2010s under steady distribution as shown by the downward trend of lower highs which ended in the March 2020 market washout.

Since bottoming out 18 months ago, URA has been recovering, staging an initial downtrend breakout in December of 2020 and rallying into June. The ETF then spent the summer correcting and consolidating its previous gains. This month, URA has launched into a new upleg, snapping another downtrend line, completing a bullish Double Top breakout and regaining $25.00.

Based on previous column lows and a horizontal count, initial upside resistance appears in the $32.95 to $35.65 area. Initial support appears near $25.00 where a 3-box reversal, and a round number converge. 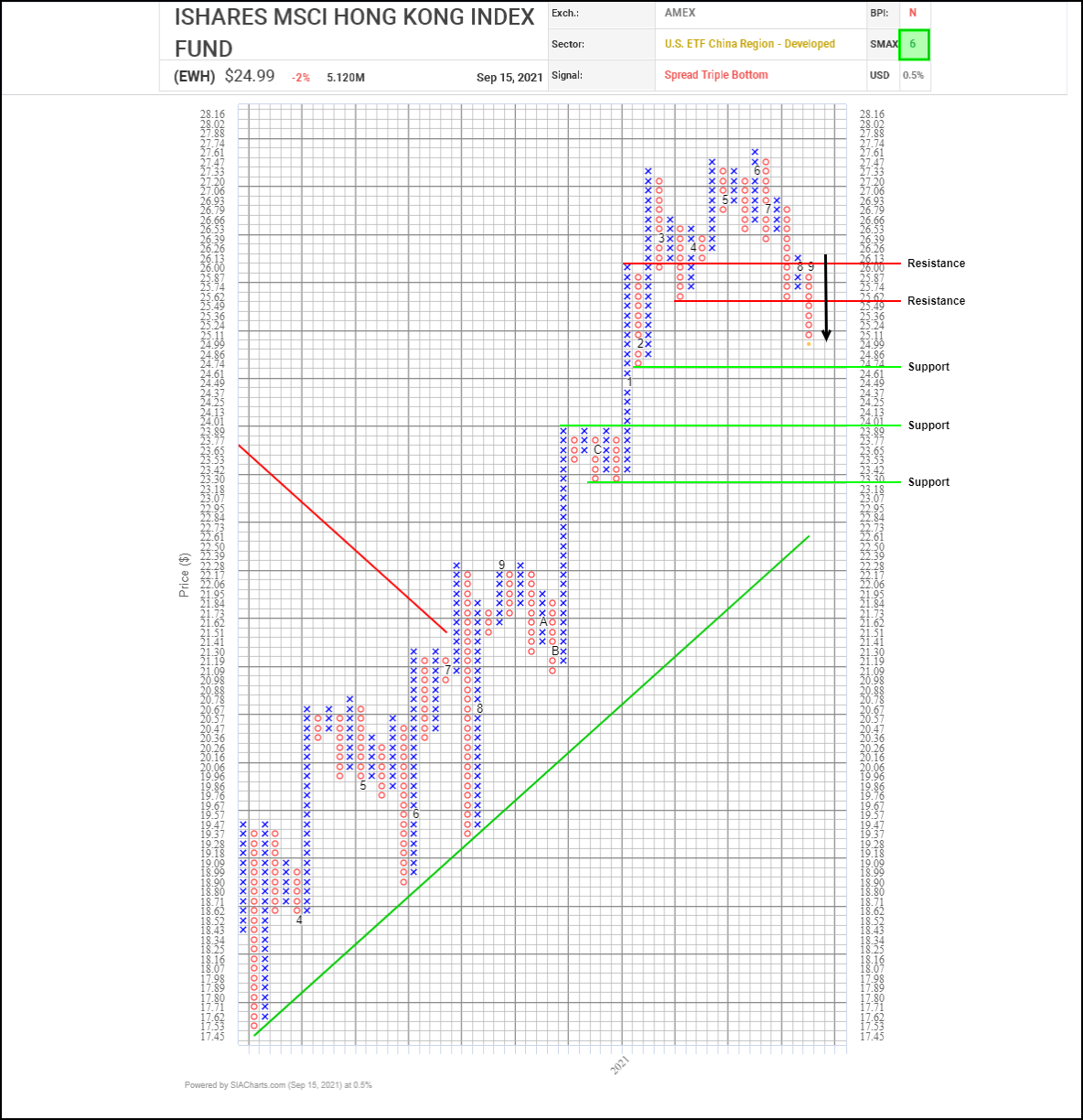 For the last six months, indices around the world have been trending sideways to slightly positive as is common at this point in the cycle, torn between improving fundamentals and growing pressure on central banks to ease back on easy money stimulus.

Through this period, major support levels set back in the late winter have held indicating this as a consolidation phase. The risk of this turning into a correction, however, has increased with the first major index crack appearing this week.

The Hang Seng, as represented here by the iShares MSCI Hong Kong Index Fund (EWH), peaked back in June and has been steadily drifting downward since then. The completion of a bearish Double Bottom and Spread Double Bottom patterns were ominous, but a shift toward distribution was confirmed by yesterday’s big Spread Triple Bottom breakdown below $25.50 and the follow-through drop below $25.00.

Overnight, the Hang Seng continued to plunge, losing another 1.45%, confirming the breakdown and signaling that equity market sentiment remains fragile. Next potential downside support appears a the February low near $24.60, followed by $23.90 where a horizontal count and a retest of a previous breakout point converge, then prior support near $23.20. Initial resistance appears near $25.60,based on a 3-box reversal and a retest of the current breakdown point.