It has been a roller coaster ride for world markets in the last week. First, we saw an in increase in selling pressure against stocks and commodities as concerns over the financial health of Chinese real estate giant Evergrande burst from the back pages to the front page. Just as quickly, these fears started to fade as the People’s Bank of China provided additional liquidity to the financial system, concerns about contagion beyond China eased, Evergrande indicated plans to meet a domestic interest payment and Fed Governor Powell downplayed wider contagion risks.

Meanwhile, in yesterday’s Fed decision and statement, the US central bank indicated that it plans to start moderating the pace of asset purchases, aka tapering, soon with an intention to be finished by the middle of 2022. Also notable was that the number of FOMC members expecting at least one interest rate hike in 2022 has increased to nine, or half the members surveyed. Fed members also still appear to be thinking of inflation as transitory, projecting Core PCE inflation (their favorite measure) to rally from 3.7% this year (up from 3.0% in June) to 2.3% next year.

The end of the month and the quarter are coming up fast. In addition to the potential impact of Evergrande’s financial difficulties on sentiment, US lawmakers are continuing to negotiate over the budget and the debt limit in a bid to avert a potential October government shutdown. Sunday, Germany is holding a federal election which may have more of an impact than Canada’s nothingburger result, particularly since either way, the country is looking straight into a post-Merkel future. Economic news is pretty light as well, headlined by today’s flash PMI reports and Canada retail sales, plus US durable goods orders on Monday. We are still between earnings seasons but we could get a few pre-announcements heading into month-end.

In this issue of Equity Leaders Weekly, we take a look at what action in gold is telling us about investor attitudes toward risk, and at the S&P 500 Retail ETF XRT. 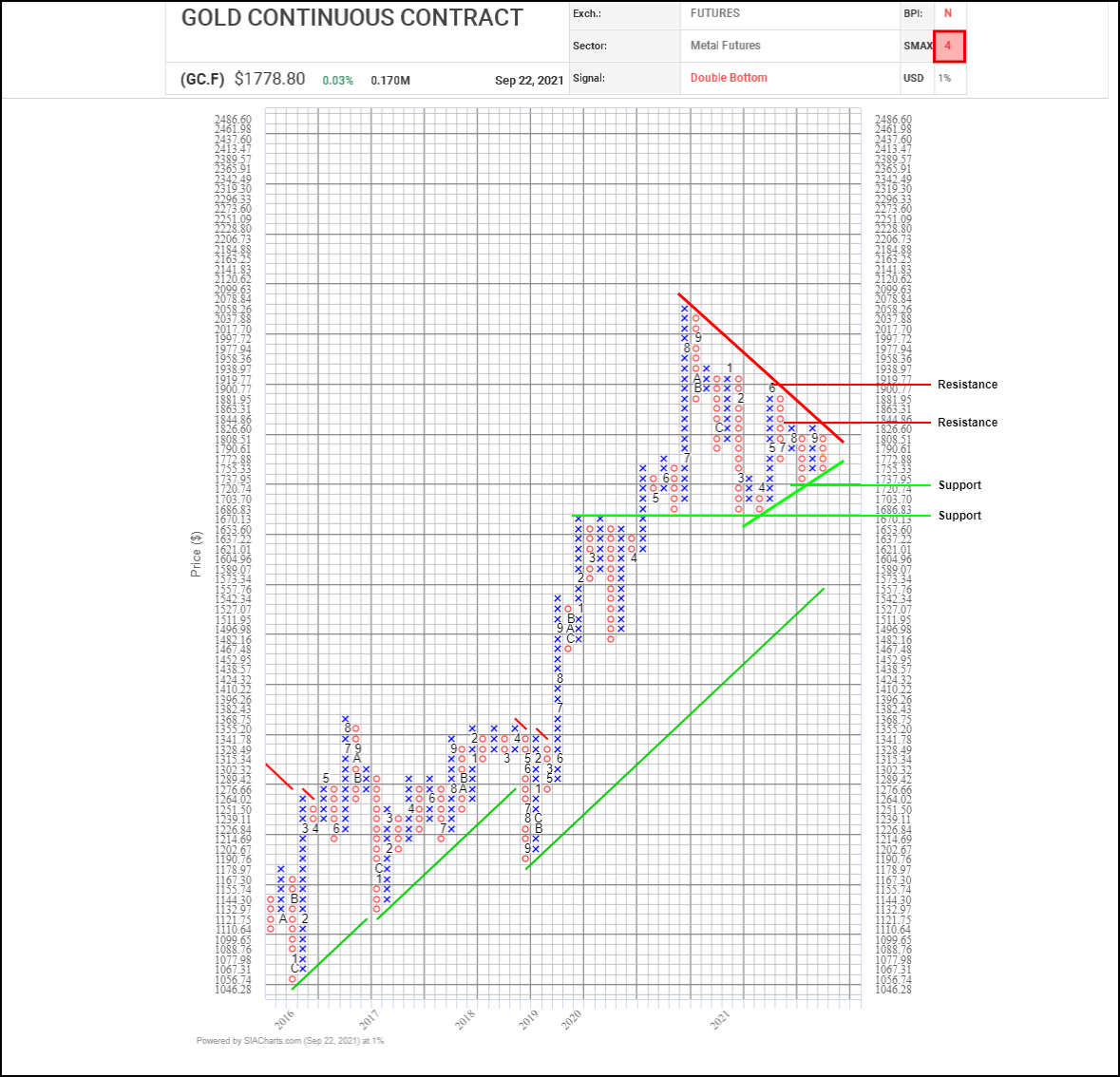 One question we have been hearing a lot lately from clients and the media is that given gold’s historic roles as a defensive play and as a hedge against inflation, in a time of rising inflation and increasing risks, why is the price of gold still depressed relative to its summer 2020 peak and stuck below $1,800/oz.

There are a few potential explanations for this. First, as a risk haven, it’s possible that given what investors and markets have gone through over the last 18 months, everyone may be desensitized to risk. More recently, the lack of a response to Evergrande’s troubles suggests that investors think the main risks may be contained to China and that a wider contagion looks unlikely.

Second, with regards to inflation, it’s possible that investors may be in agreement with the Fed that inflation (particularly on the commodity side), may be transitory. It is also possible that capital interested in alternative currencies which in the past may have gone into gold could be going elsewhere, particularly cryptocurrencies.

Since peaking above $2,000/oz in the summer of 2020, gold has been steadily retreating, as shown by the downward trend of lower highs which has emerged. On the encouraging side, however, an upward trend of higher lows has emerged, forming a Symmetrical Triangle which suggests a consolidation phase is underway. A sideways trend has also emerged between $1,720 and $1,845 lately.

A breakout over $1,845 would snap the downtrend line and signal the start of a new upleg with next resistance in the $1,900 to $1,920 area. That would also call off the currently active Double Bottom pattern which has potential downside 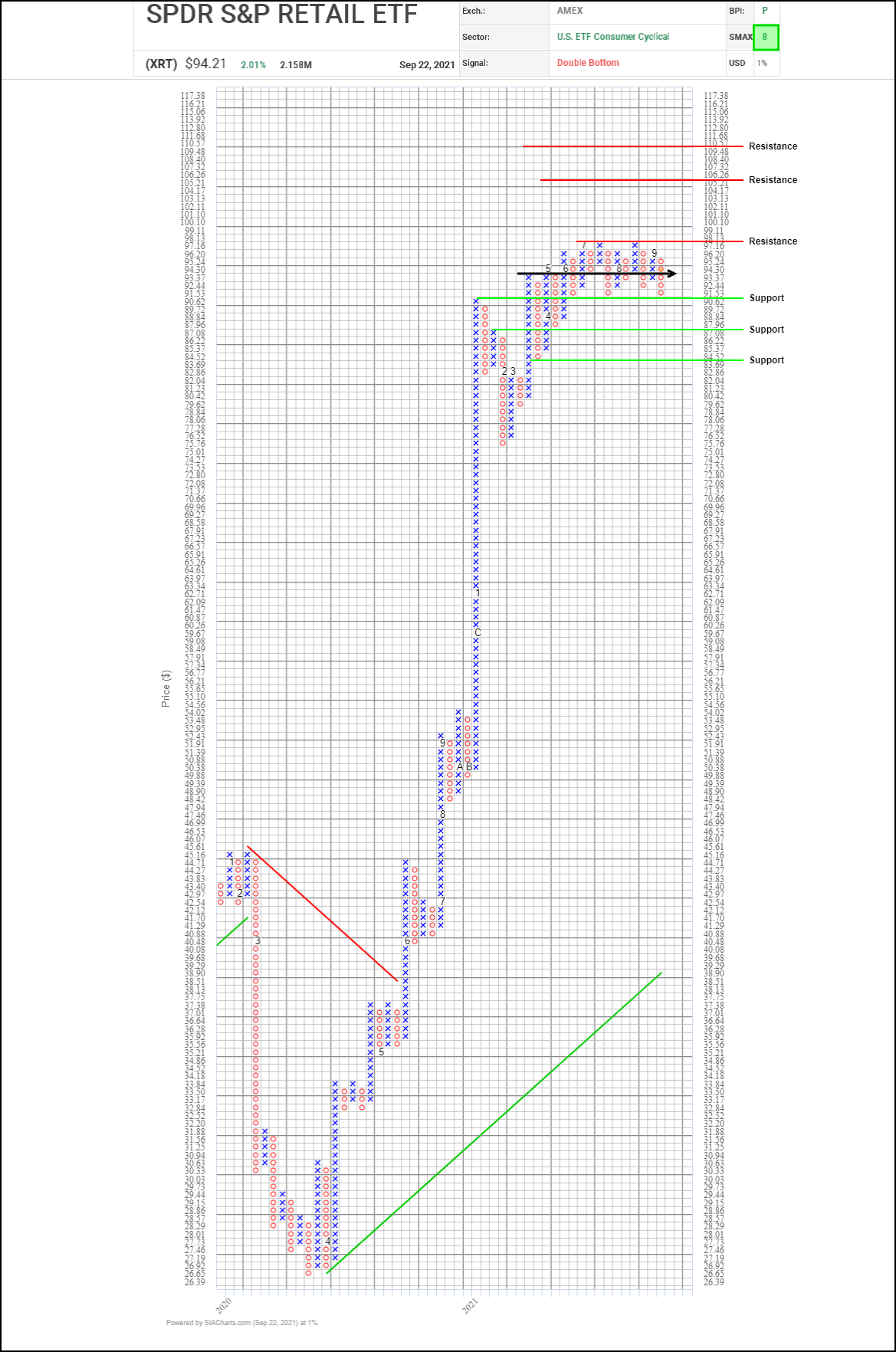 For the last several months, we have been highlighting how the overall trend for North American equities has shifted from upward to sideways in a normal mid-cycle consolidation, particularly for the Russell 2000 Index. This change in trend may also be seen in some industry groups, particularly the retail sector.

Coming off of a High Pole rally that peaked in January, the SPDR S&P 500 Retail ETF (XRT) staged a winter correction and an early spring rebound. While continuing to reach new highs into July, upward momentum slowed over the course of the spring.

Through the summer, XRT moved into a sideways range between $90.65 and $98.15, both sides of which have been successfully tested several times now. With retail tied closely to consumer spending, and consumer spending being a significant component of the economy, whichever direction XRT eventually breaks out of this range could have implications for the wider market as well.On a breakout, next potential upside resistance appears near the $100.00 round number, then $106.25 and $110.55 based on vertical counts. On a breakdown, next potential downside support appears near $87.05 and $83.70 based on previous column highs and lows. With a bullish SMAX score of 8, XRT is exhibiting strength against the asset classes.