It has been another rough week for equity markets around the world with big daily and even intraday swings in both directions. That being said, so far indices have held above key support levels, such as 2,100 for the Russell 2000, suggesting that we are currently in a downswing within a broader sideways trend. Recent choppiness can be attributed to a number of factors most notably related to investors increasingly recognizing that the easy money party of the last 18 months is winding down. This week, the Reserve Bank of New Zealand became the first sizeable central bank to announce an interest rate increase, having finished asset purchases earlier this year.

The main event of the last week has been a big rally in Energy prices that carried crude oil to its highest level since 2014 and natural gas to its highest level since 2008 with investors increasingly worrying about supply disruptions and an inability for capacity to keep up with demand. Renewed interest in energy commodities has spilled over into energy stocks on both sides of the border as well.

The coming week brings a number of key economic announcements including US nonfarm payrolls and Canadian inflation on Friday, followed by inflation and retail sales numbers for the US and China after Monday’s Canadian and partial US holiday. Investors may look to for signs of whether they add to the case for tapering or not. Earnings season also starts next week with big banks and brokerages leading the way as usual. In this issue of Equity Leaders Weekly, we look at recent strength in the natural gas price and at renewed interest in US Financials as the start of earnings season approaches. 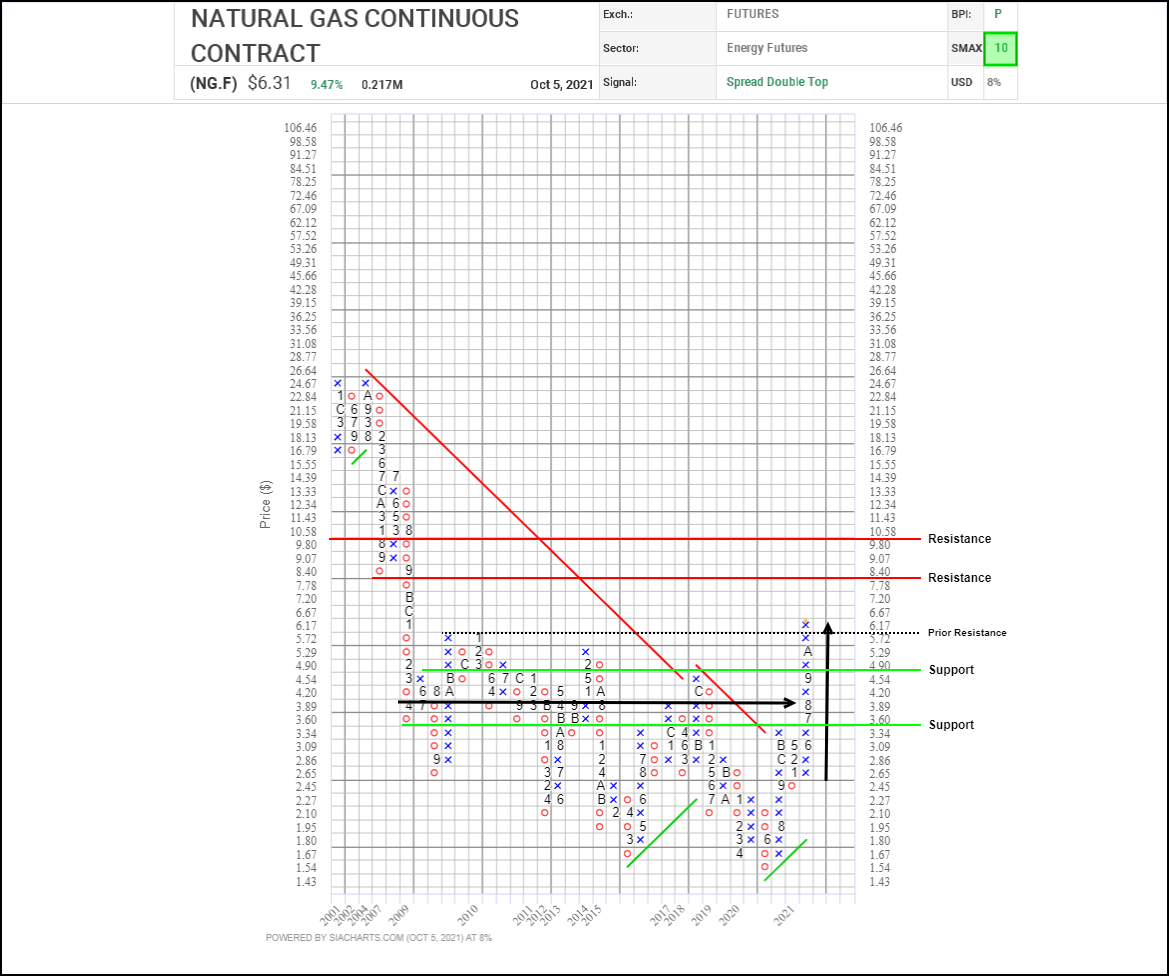 This long-term, 8% chart highlights the strength of the current rally in the natural gas price. Gulf of Mexico production disruptions from Hurricanes Ida and Nicholas, increasing demand as the economy improves, chronic underinvestment, and anticipation of home heating season demand, which starts next month, have combined to stoke current interest.

Since crashing in the late 2000s, natural gas has been stuck in a sideways range for over a decade, building a long base. The price started to climb back in the spring and this week, it cleared $6.00/mmbtu for the first time since 2008, signaling that base building is over and a new recovery trend has started. 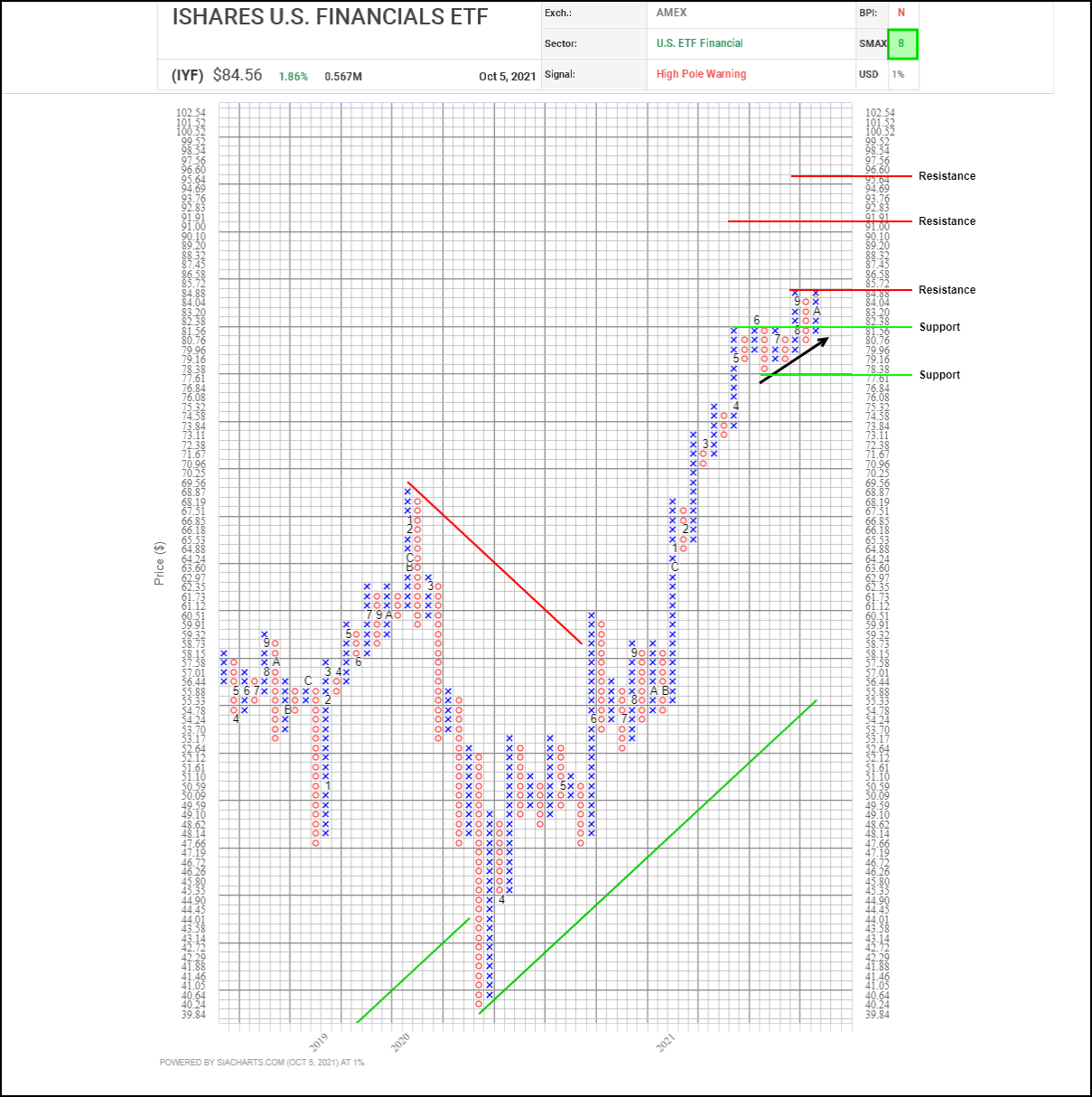 Although the rally in Energy stocks has been capturing a lot of attention from investors, in our daily reviews of the SIA Charts reports for US Stocks, we have noticed a lot of Financials quietly climbing up the rankings as well, particularly banks and insurance companies.

It’s unclear at this point whether Financials are attracting renewed interest in tandem with rising interest rates (which could enable them to raise the rates they charge to customers), or because increasing rates are a sign of an improving economy. Big US banks, asset managers, and brokerages start reporting earnings on Wednesday. This quarter, in addition to revenues and earnings, investors may look for signs of whether loan loss provisions are continuing to come down and how investment related revenues did though a choppy quarter for equity markets.

The iShares US Financials ETF has been under accumulation since the summer, establishing a new upward trend of higher column lows. Currently it is bumping up against resistance at its September high near $85.72. A breakout from here would signal the start of a new upleg for the sector with next potential resistance near $91.90 and $96.60 for the ETF based on vertical and horizontal counts.

A failure to break out, however, would suggest that the current sideways trend persists with initial support near $81.55 based on a 3-box reversal.