The Santa Claus Rally which started last week, has continued into this week but the initial rebound momentum has slowed. Participation has also been relatively narrow and concentrated in the largest cap companies. Some of the big cap indices including the S&P 100, S&P 500 and Dow Industrials have been able to touch new all-time highs, but this action has not been confirmed by broader or small cap indices like the Russell 2000.

Trading action across equity sectors, international markets, and other asset classes indicates that for the most part, investors remain defensive. Some of the main indicators of investor appetite for risk including emerging markets and cryptocurrencies continue to struggle. Defensive equity market sectors have been attracting interest lately including Consumer Staples, Health Care and Utilities, while momentum/risk sectors particularly technology and communications have been struggling.The week between the holidays is traditionally quiet not only for trading but for news. A couple of releases are scheduled for today including weekly employment claims and Chicago PMI. The economic calendar kicks off 2022 with a roaring start next week with a number of reports on the slate including Manufacturing and Service PMI reports, ADP and nonfarm payrolls, plus construction and trade data.

In this issue of Equity Leaders Weekly, we look at recent action in the Utilities sector and renewed interest in the UK market. 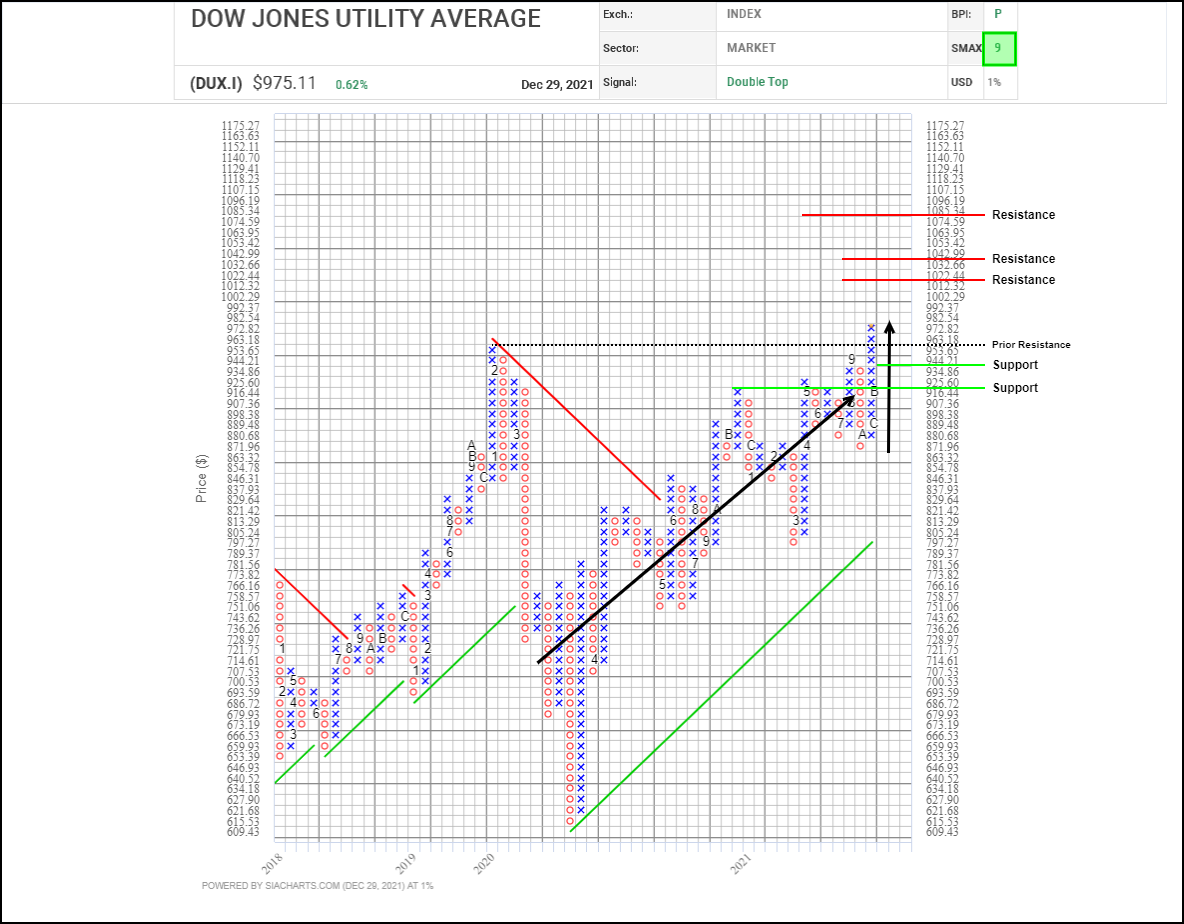 Generally seen by investors as a mature, slow growth, steady sector, utilities have tended to be seen as a defensive area of the market sensitive to interest rates.

It has been a long road to get here, but in the last few days, the Dow Jones Utilities Average has finally completed its recovery from the 2020 market crash, breaking through its February 2020 peak, which was near 963 to a new all-time high. Interestingly, this has occurred at a time when interest rates are expected to rise, which historically has been a headwind for the sector. This means that investors not only are focusing on the sector’s defensive attributes, but that the defensive mood among investors is strong enough to offset other forces.Prior to the big breakout, DUX.I staged a bullish Double Top breakout, continuing a series of positive pattern completions and rallies up off of higher lows. Initial upside resistance appears near the 1,000 round number. Vertical and horizontal counts suggest potential upside tests after that near 1,022, 1,042 and 1,085 on trend. Initial support appears near 934 based on a 3-box reversal. 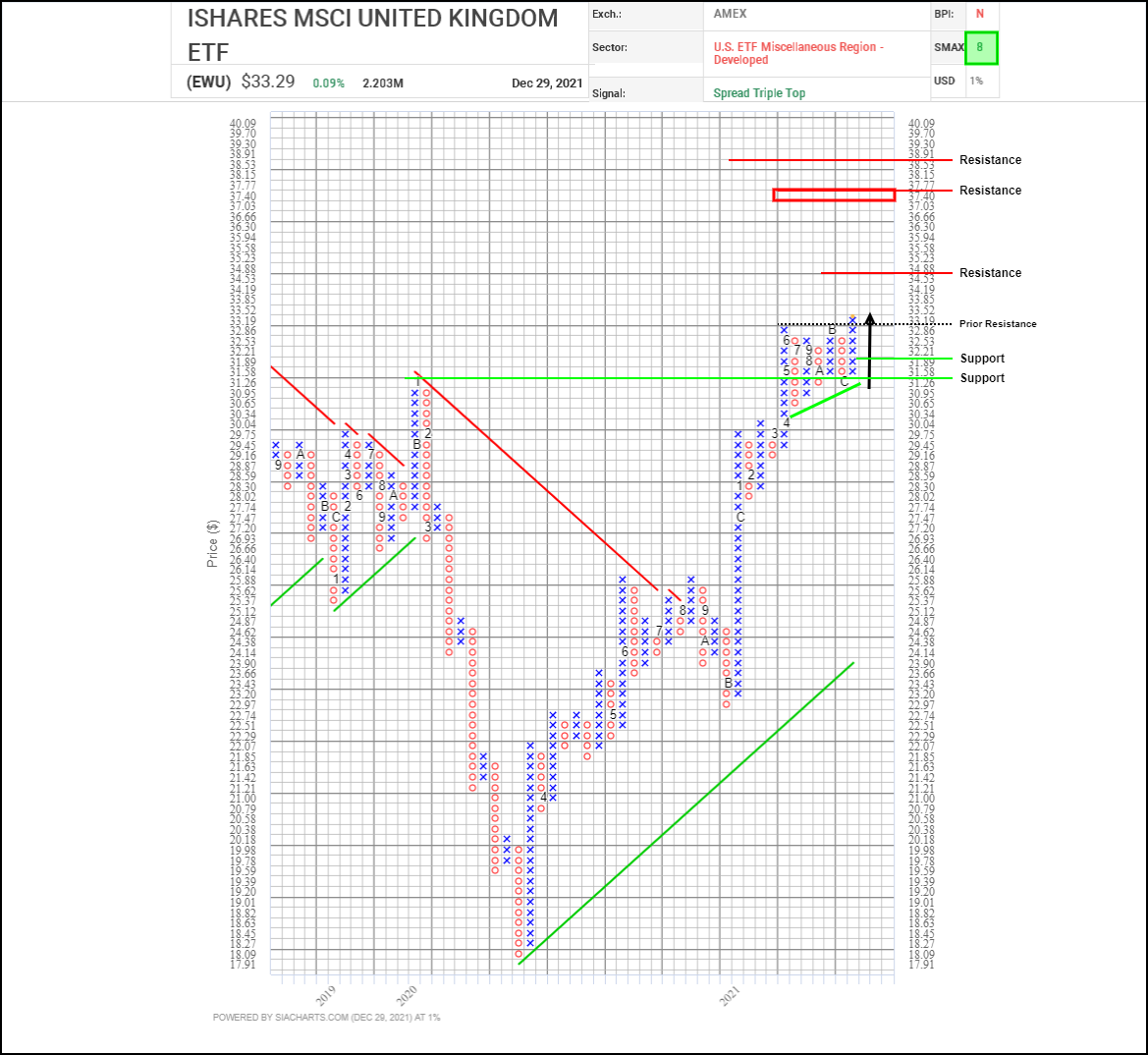 2021 has been a challenging year for the UK as the country dealt with the impact of Brexit combined with lockdown policies on logistics and their economy. The country also experienced multiple waves of COVID, including being one of the first countries after South Africa to be hit by the Omicron variant.

It appears, however, that at least some investors are anticipating that the UK may be on the verge of putting its problems behind it. The UK stock market, which had been stuck in a sideways trend since 2014 as the country worked its way through the distractions of the failed Scottish Independence drive and the eventually successful Brexit drive, broke out to a new high earlier this year. Following what looks like a false start and consolidation, UK equities broke out to a new high this week, indicating improving investor sentiment toward the country and the start of a new advance.

Back in the spring, EWU broke through its early 2020 peak, then starting in June, it paused for six months to digest its gains. Over that time, pullbacks continued to bottom out at higher lows, indicating that underlying accumulation remained intact.

EWU has now broken out to the upside once again, completing a bullish Spread Triple Top pattern to indicate that the recent consolidation phase has ended and a new rally phase has started. Vertical and horizontal counts suggest next potential resistance on trend may appear near $34.90, the $37.40-$37.75 range, or $38.90. Initial support appears near $31.90 based on a 3-box reversal.