This year’s New Year’s rally, which extended the Santa Claus Rally that ran through the last ten days of 2021, has quickly come to a screeching halt. Investors appear to have quickly recognized that many of the issues which plagued sentiment in late November and early December not only haven’t gone away, they may actually be worsening.

In particular, focus this week has turned back to the end of the easy money party. While the Bank of Canada has indicated that after it completed tapering it would maintain its balance sheet at a high level while it started to raise interest rates, minutes of the last Fed meeting hinted that not only did it accelerate tapering, interest rate hikes could start soon after tapering ends in March and the US central bank could potentially start to shrink its balance sheet shortly after that, a decidedly hawkish tone.

Investors reassessing their expectations to factor in a potentially more hawkish Fed than previously thought can be seen in the US 10-year treasury note yield climbing toward 1.75%. Capital continues to shift to a “risk-off” stance, exiting growth/momentum/aggressive plays such as technology stocks, small cap stocks emerging markets and cryptocurrencies, and rotating into defensive havens like the US Dollar, Japanese Yen and defensive equity market sectors like the utilities group we mentioned on the December 30 issue of Equity Leaders Weekly.

On the other hand, concerns about the impact of the Omicron wave appear to be fading for now. The price of crude oil has started to rebound with OPEC+ keeping a steady hand on the rudder as it continues to restore supply, and with US stockpiles continuing to be drawn down.

There are a number of economic announcements coming this week which investors may continue to look at through the lens of whether they increase or decrease pressure on the Fed to accelerate normalizing monetary policy. Friday brings US nonfarm payrolls and Canada employment, followed by US consumer and producer prices next Wednesday and Thursday.

We are a week away from the January 14th kickoff to US earnings season when several big banks report results. We are in confession season, which has been quiet so far, so it remains possible that we could see companies pre-announce results that could potentially impact sentiment.

In this issue of Equity Leaders Weekly, we contrast recent action in the software and energy sectors as examples of rotation between equity market groups. 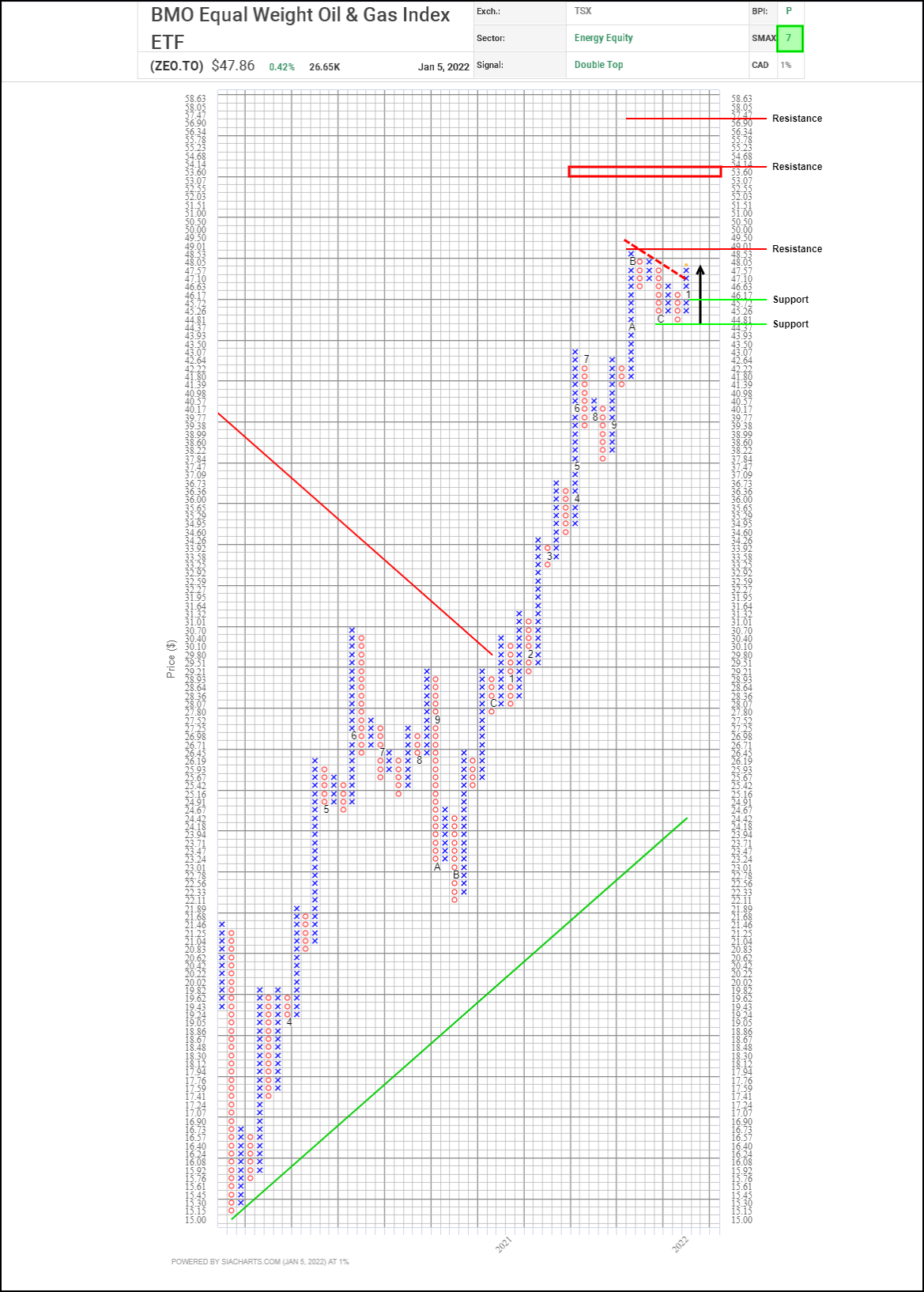 About a year ago, the BMO Equal Weight Oil & Gas Index ETF* (ZEO.TO) snapped out of a downtrend and never looked back. Through 2021, the ETF steadily climbed in an upward trend of higher lows, positive pattern completions and bullish High Pole rallies.

Back in October-November, the ETF soared, but over late November and December, a correction unfolded that now appears to be ending. A successful retest of $44.25 established support and into January, the ETF price has launched back up off that level, completing a bullish Double Top, snapping out of a short-term downtrend and signaling renewed interest in energy stocks in tandem with a rebound in crude oil and natural gas prices.

Currently, ZEO.TO* is staging an upswing within a sideways range. Initial resistance appears at the previous peak near $49.00 then the $50.00 round number. A move through there would confirm the start of a new upleg with next potential resistance after that in the $53.60 to $54.15 zone, then near $57.45. Initial support has moved up toward $45.75 based on a 3-box reversal. 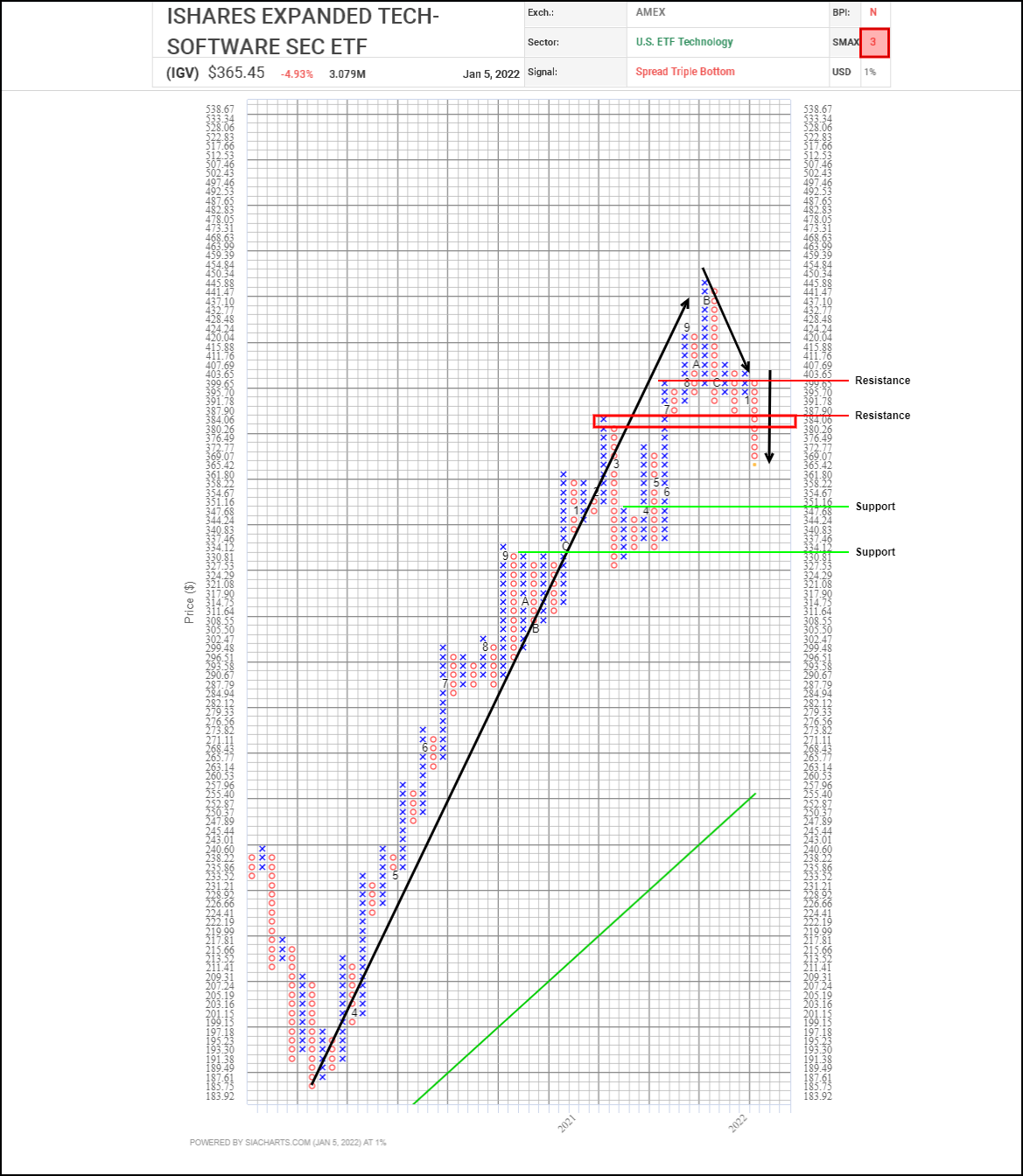 Soaring up out of the March 2020 market bottom, the Technology-Software sector never looked back, staging what for over eighteen months was a relentless drive upward, establishing consistently higher lows and completing a series of bullish patterns.

The first cracks in the uptrend started to appear in late November and early December when a market pullback and a bearish Double Bottom breakdown were not quickly reversed, with the units settling in at a lower level instead.

This month, support which had been near $385.00 caved and the iShares Expanded Technology-Software Sector ETF decisively came under distribution. This breakdown completed a bearish Spread Triple Bottom pattern, signaling the start of a new downtrend which has been confirmed by the formation of a bearish Low Pole.

With a bearish SMAX score of 3, IGV is exhibiting weakness against the asset classes.

Based on a combination of previous column highs/lows, and vertical/horizontal counts, the next downside support zone of note appears between $330.00 and $350.00. Initial resistance appears near $385.00 where a 3-box reversal and a retest of the breakdown point converge.