It has been another volatile week for world markets with several sizeable reversals of sentiment day to day and sometimes even hour to hour. The war between Russia and Ukraine and the implementation of sanctions on Russia’s banking system and energy distribution has sent shockwaves through stocks, bonds, commodities and currencies.

The price of crude oil has continued to soar with WTI blasting through $100.00/bbl and carrying on above $110.00/bbl and US gasoline climbing above $3.00/gallon for the first time since 2014. Meanwhile capital continued to move into defensive havens sending gold back up above $1,900/oz. There have been some signs of stabilization in stocks and cryptocurrencies but it’s too soon to say if this is temporary or sustainable.

Recent economic reports out of North America have been mixed with indicators of activity such as Canadian GDP and US ADP payrolls exceeding expectations. On the other hand, inflation readings have continued to run very hot even before this week’s energy price spike, keeping pressure on central banks to raise interest rates. Yesterday, the Bank of Canada announced its first 0.25% rate hike and started to openly talk about Quantitative Tightening (running off the assets it purchased under its QE program) while US Fed Chair strongly hinted to Congress about a potential US rate hike at the next Fed meeting in two weeks.

All of these colliding forces (changes in monetary policy, conflicting economic news and war uncertainty) may continue to influence trading and shape sentiment in the coming days. Even within equity markets there have been significant differences in relative strength. Most notably, several US defense contractors turning in their strongest relative performance in over five years lately and have been highlighted in recent issues of the Daily Stock Report. There are still a number of scheduled reports in the coming days with the potential to move markets including today’s OPEC+ meeting, tomorrow’s US nonfarm payrolls / wage inflation report and next week’s US consumer price inflation reading. Earnings season continues to wind down.

In this issue of Equity Leaders Weekly, we take a look at renewed interest in defense stocks and at the long-term context of recent action in the price of oil. 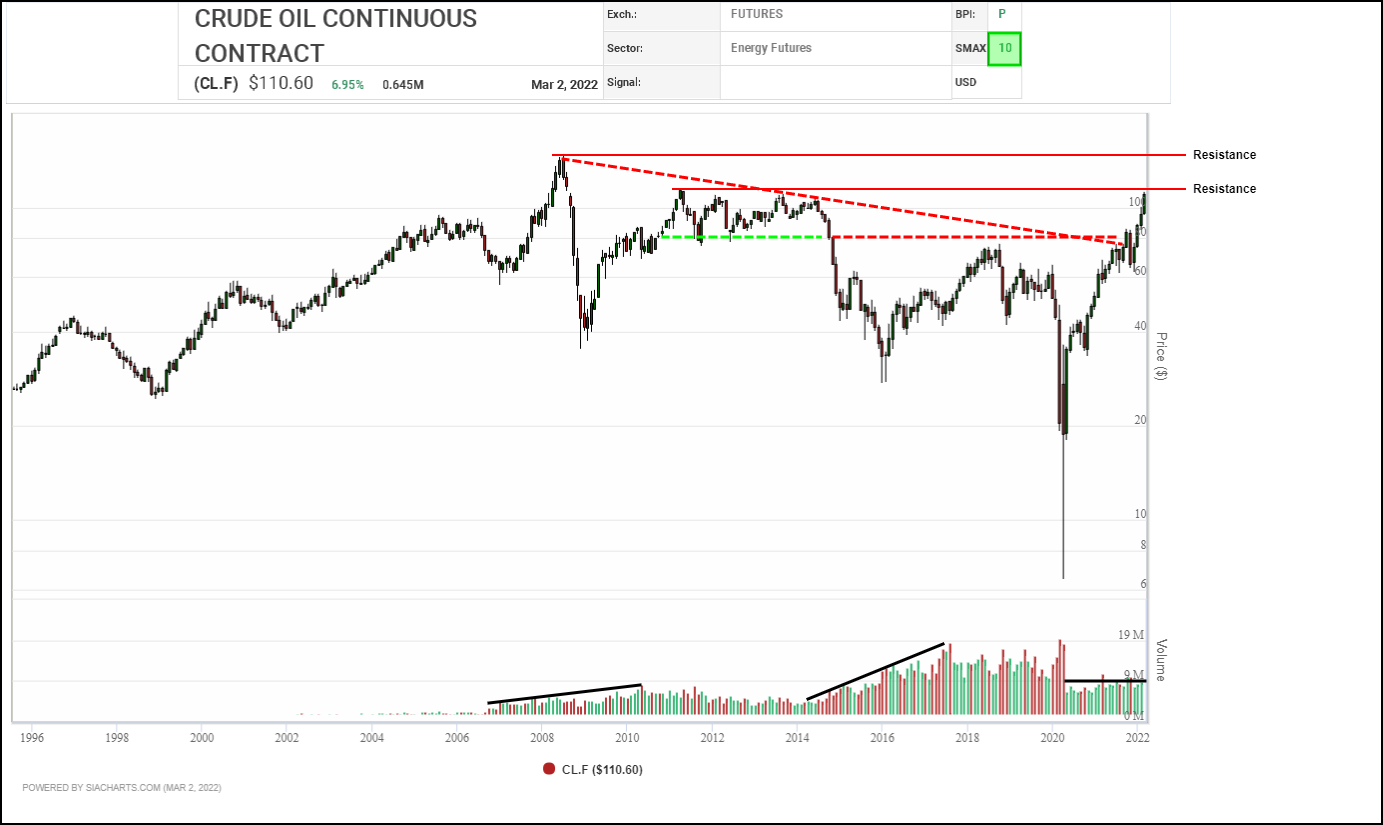 The outbreak of war between Russia, a major oil producer and Ukraine, a key pipeline transit country, has sent the price of oil soaring back up above $100.00 for the first time since 2014. On this momentous occasion it’s worthwhile to break from our usual analysis and take a longer-term perspective.

This monthly chart going back to 1995 shows that the oil price previously exceeded $100.00/bbl twice, once in 2008 when it popped up to a peak near $147.50, then quickly came right back down, and 2010-2014, where it traded between $80.00 and $113.50 for several years. Currently, crude oil is approaching resistance near $113.50 followed on a breakout by round numbers near $120.00 or $125.00.One of the surprising things about the current advance is that there has been no significant change in volume. Previous rallies in 2008, 2010, and 2018, plus the price declines in 2014 and 2020 were all accompanied by significant increases in trading volumes. This time around, volumes have remained similar to levels that have prevailed over the last two years. A low-volume rally suggests that perhaps some traders aren’t convinced about whether the current rally is sustainable since it has been sparked by political events rather than changes in demand. 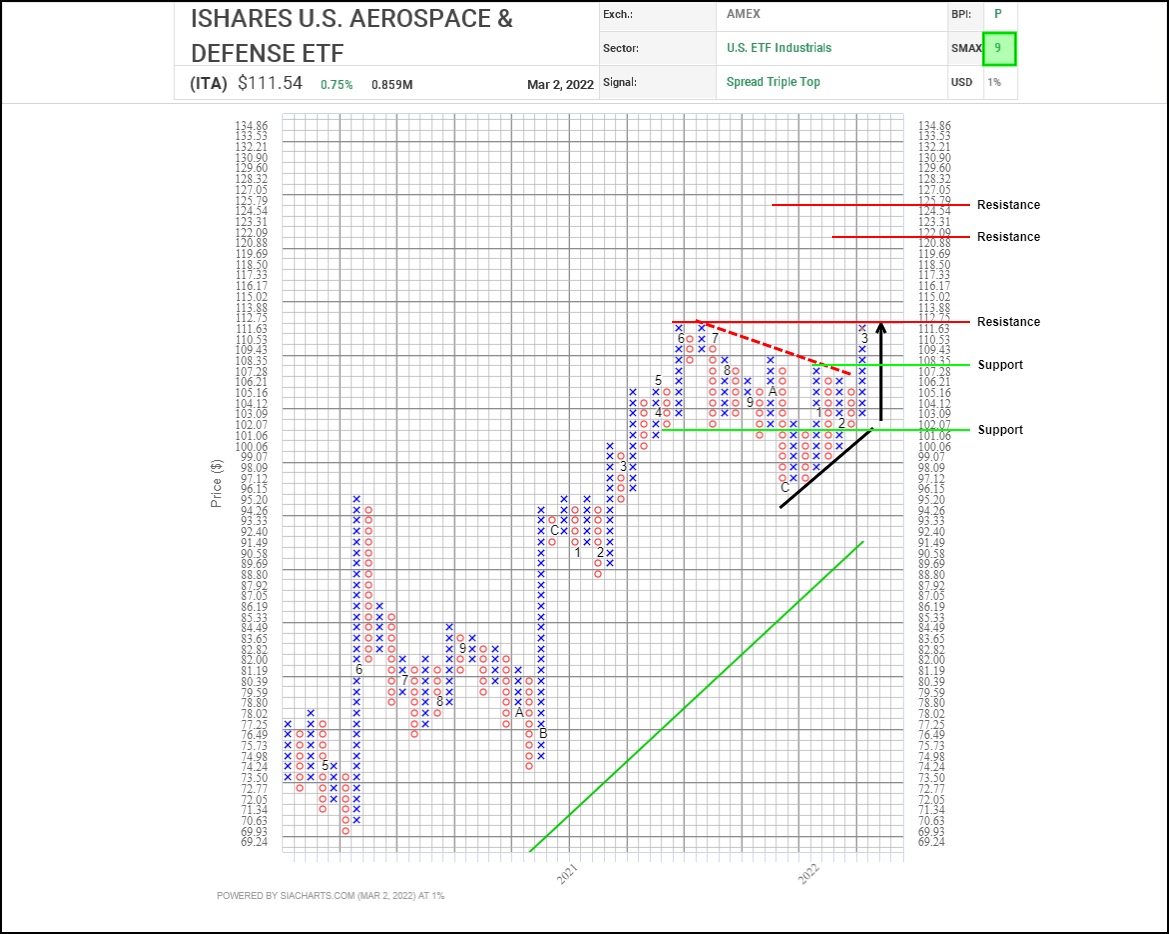 A significant change in the relative strength between the two components of the Aerospace & Defense sector appears to be underway. For the last five years or more, sector action has been dominated by the rise and fall of Boeing and other companies tied to the civilian aircraft sector. Over that time, several defense contractors found themselves stuck near the bottom of the rankings in their universes for years on end.

With the prospect of war looming and then igniting over the last several weeks, the defense side of the group has attracted renewed attention and several defense stocks have started to rally and rise up the rankings toward the top of their universes. This shift has also had a positive influence on trading in the iShares US Aerospace & Defense ETF (ITA).

ITA bottomed out in December and started to build a new uptrend of higher lows through to February. In the last few weeks, accumulation has accelerated, with the ETF snapping out of a downtrend, and completing several bullish patterns including a Double Top, a Spread Double Top and a Spread Triple Top.

Currently, ITA is bumping up against resistance at its June 2021 peak near $112.25. A breakout there would signal that the current consolidation phase has ended and a new upleg has started within a longer-term uptrend.

Should that occur, next potential resistance may appear near $122.10 or $125.80 based on horizontal counts. Initial support appears near $107.25 based on a 3-box reversal and a retest of a recent breakout point.