For the most part, equity markets around the world have been drifting downward over the last week and several have started to roll back down as their recent rebounds fade. Reports of higher than expected inflation reaching levels last seen in the early 1980s from the US, the UK and some European countries, has rekindled fears that central banks have fallen far behind the curve and may need to act much more aggressively to contain inflation. This sentiment has driven the US 10-year treasury note yield up toward 2.80% its highest levels since 2018, and gold, historically seen as a store of value and an inflation hedge, back up toward $2,000/oz.

Central banks have started to take increased action this week toward fighting inflation.

The Reserve Bank of New Zealand, who had already been among the leaders of the current tightening cycle, accelerated its rate hike program announced a 0.50% increase of its overnight rate to 1.50% when a 0.25% hike had been expected. The Bank of Canada also announced a 0.50% rate increase to 1.00% which was widely expected and also announced that it is going to start Quantitative Tightening later this month by no longer replacing bonds in its portfolio as they mature.

Earnings season in the US is off to a disappointing start. JPMorgan missed on earnings and announced a sizeable loan loss provision increase blaming higher inflation and uncertain economic conditions. Bed Bath and Beyond’s report could be even more ominous as the retailer announced a large surprise loss, blaming costs rising even faster than price increases and squeezing margins. These reports suggest that accelerating inflation could potentially have a large impact on results and guidance as earnings roll out over the coming weeks.

It's Easter weekend with markets closed for a full holiday tomorrow, followed by a partial holiday on Monday (government and banks closed, stock markets open). Earnings season resumes, expands and broadens starting on Tuesday with reports starting to roll out from US large cap companies in the Mining (how could benefit from higher commodity prices), Steel, Consumer Products, Regional Banks, Railroads, Technology and Oilfield Services.

In this issue of Equity Leaders Weekly, we take our monthly look at sector scopes and at what recent declines in Asia Pacific indices, particularly Japan, may be telling us about sentiment and risk tolerance toward international equities. 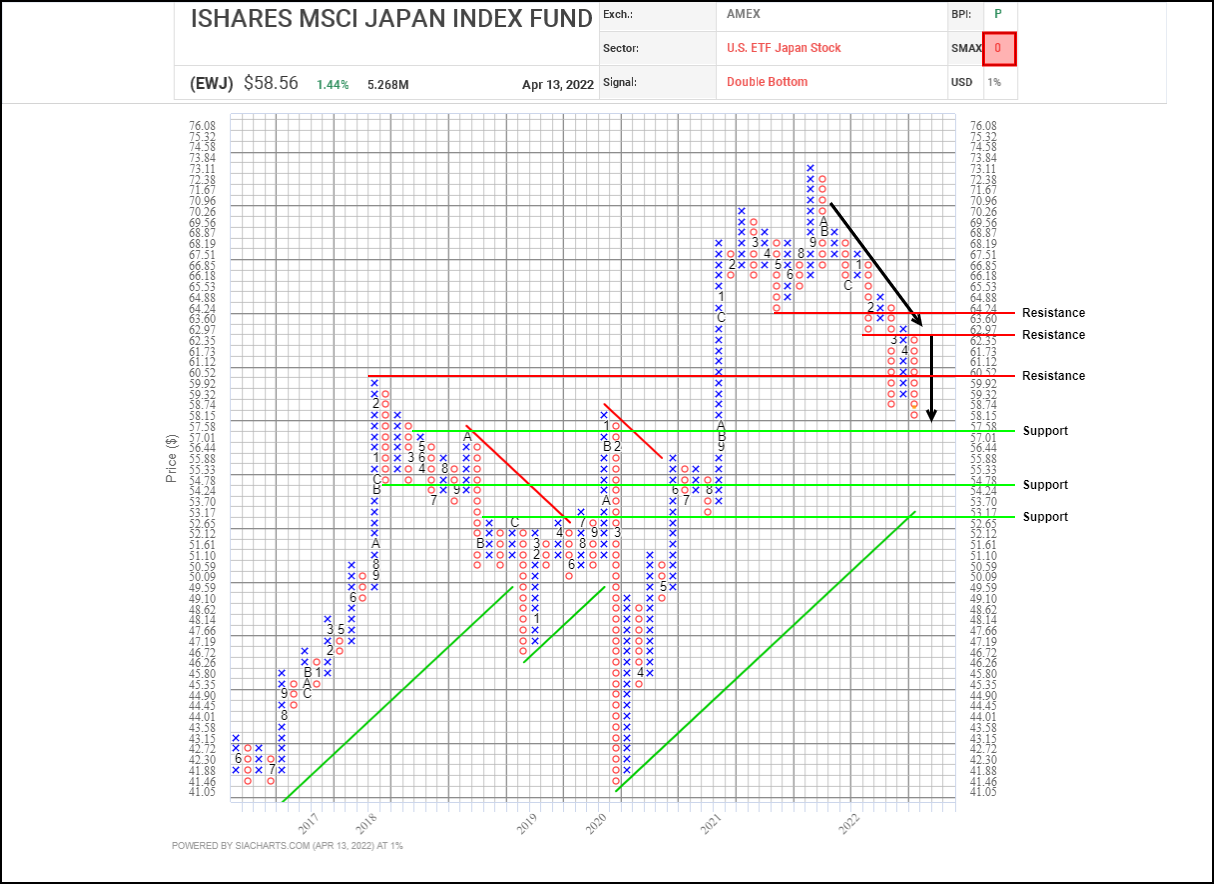 Two weeks ago, in the March 31st issue of Equity Leaders Weekly, we talked about how some European countries, particularly Germany were starting to rebound as the initial shock of war subsided. Asia Pacific markets, however, have remained under pressure, particularly Hong Kong, Shanghai, Taipei and Tokyo. Resource-sensitive Sydney, on the other hand, has been climbing on the back of rising commodity prices.

The odd thing about Japan is that in recent weeks, the Yen has crashed against the US Dollar with the Bank of Japan being the last dovish outlier and holdout at a time when most central banks are tightening monetary policy to fight inflation. Despite what one would expect to be a strong tailwind from the currency, Japanese stocks have continued to fall.It would seem that the recent lockdowns in China and the growing risk of conflict in East Asia may have increased fears about the negative impact of supply chain disruptions on exporters possibly impacting sentiment toward Japanese stocks and the Yen (potentially less demand for Yen if customers can’t get their goods).

The iShares MSCI Japan Index Fund (EWJ) peaked in September of 2021 and since then, it has been under distribution establishing a downtrend of lower highs and completing a series of bearish pattern breakdowns including several Double Bottoms and a Spread Triple Bottom. With a bearish SMZX score of 0, EWJ is exhibiting weakness against the asset classes. 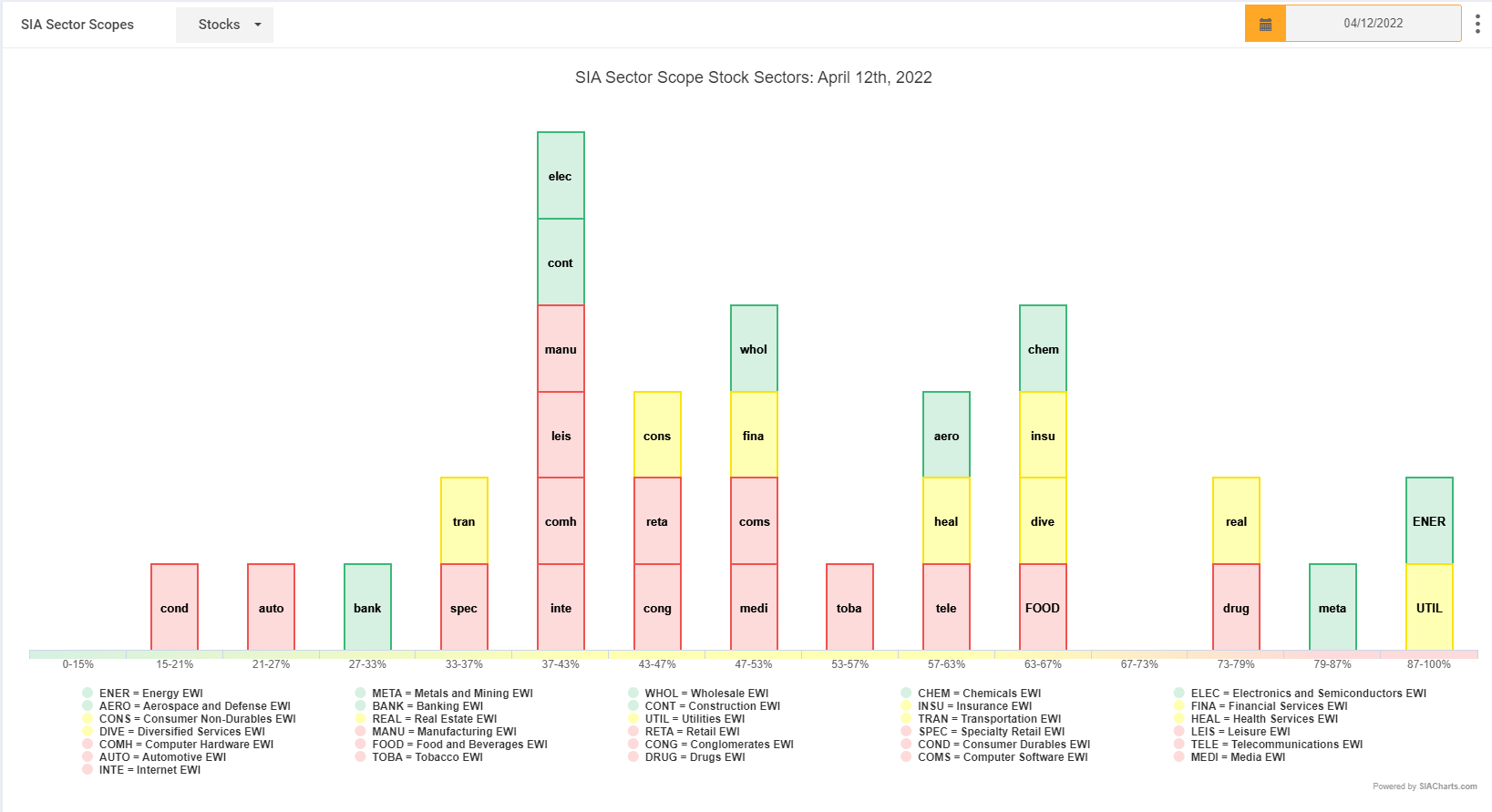 The Sector Scopes feature in SIA Charts, found in the Markets – BPI section, provides investors with a snapshot of the bullish percent (percentage of stocks in a group on a bullish charting signal) for 31 industry groups. This provides us not only with a indication of market sentiment at a point in time, but also a visual way to evaluate changes in attitudes and capital flows between groups over time.A month ago, most of the sectors were piled up on the left-hand side, indicative of a falling market that was getting oversold. The rebound of recent weeks has been fairly broad-based across sectors and currently, the groups are spread across the spectrum with the majority in the middle columns, which suggests neutral or balanced broad market conditions at the moment.

The resource producing Energy and Metals remain strong and have been joined on the right hand side by Utilities, Real Estate and Drugs, which have shown particular improvement over the last month along with Food. Consumer Durables, Autos and Banks are the relatively weakest sectors at the moment dragging behind on the left-hand side.