Traders had ignored a parade of hawkish Fed speakers but they were unable to downplay cold hard data that indicated US inflation remains high and that central banks remain under pressure to continue tightening monetary policy and get inflation under control. This realization sent major US indices to 4-5% one-day declines on Tuesday and also sent US treasury yields and the US Dollar soaring. While most posted declines on Tuesday, some of the relatively stronger areas included energy, and defensive groups like utilities, waste management, and consumer staples.

Central bank decisions and monetary policy remain the key focus for the coming week with the Federal Reserve Board, Bank of Japan, Bank of England and Swiss National Bank all scheduled to announce decisions between Wednesday afternoon and Thursday morning. The Fed is also scheduled to release economic and interest rate projections which investors may look to for hints about how long is inflation expected to remain high, how high could interest rates go and how long may they need to stay high in order to subdue inflation.

Even non-inflation numbers such as today’s US retail sales report may be interpreted by investors through the lens of what they mean for monetary policy in addition to consumer spending or corporate earnings.

Action in commodities continues to be mixed. Crude Oil has softened lately but natural gas has been bouncing back, and perhaps most concerningly for future inflation reports, grains and other agricultural commodities have been on the rise again.

In this edition of the Equity Leaders Weekly, we look at the state of the S&P 500 Index and the 30-year US Treasury yield ahead of next week’s Fed decision. 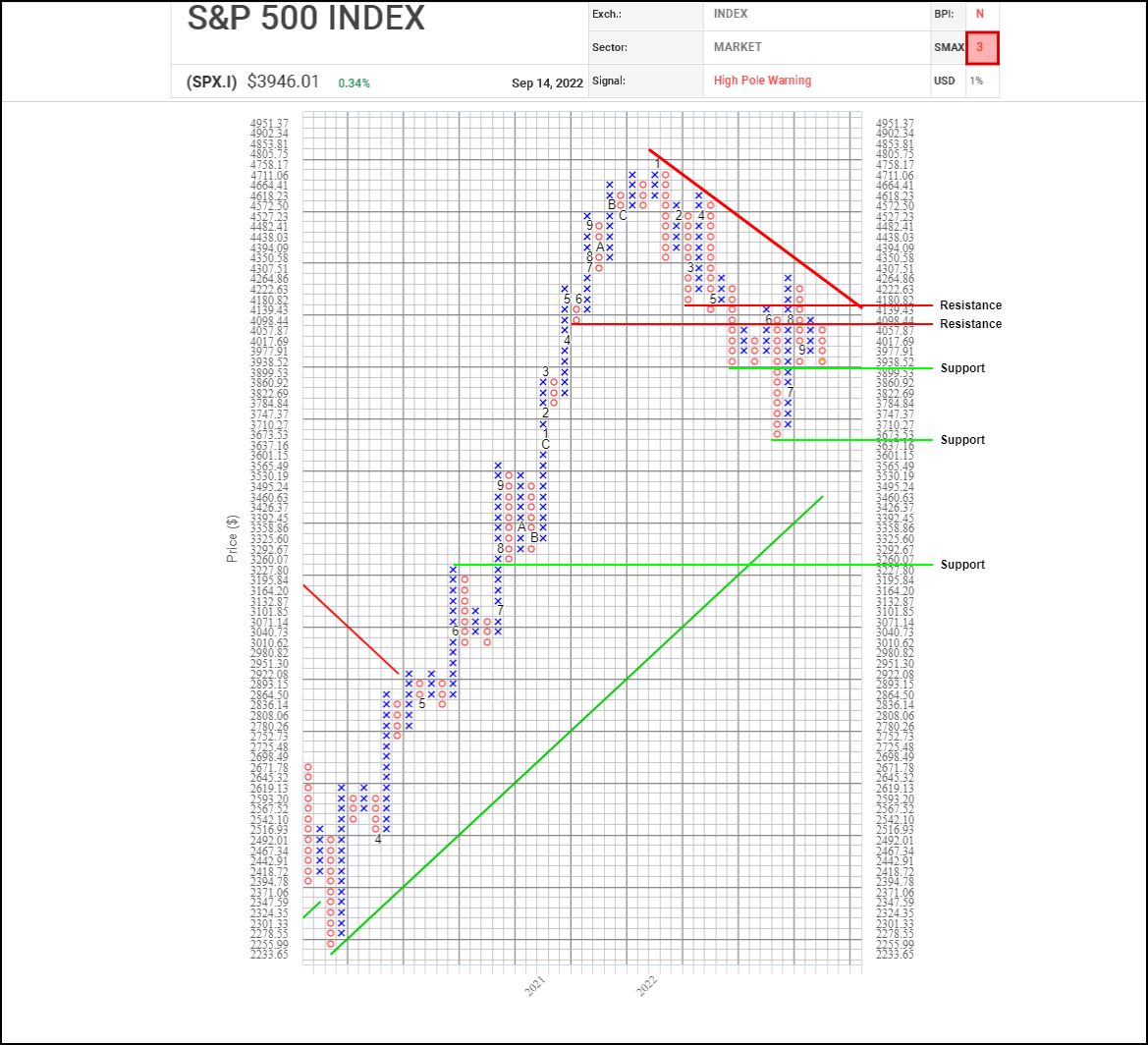 The large cap S&P 500 Index (SPX.I) is considered by many professional investors to be the premier benchmark and bellweather for the US market. In contrast, the other two major indices are seen as smaller and more concentrated samples by investors even through they still get a lot of media attention. The Dow Industrials are 30 stocks weighted more to value sectors, while the NASDAQ 100 is slanted more to growth/momentum stocks and sectors.

After staging a strong rally up off of the 2020 bottom that continued through 2021, the S&P 500 peaked in a bearish Bull Trap at the beginning of January. Since then, with the exception of a couple of bear market bounces, SPX.I has been under distribution establishing a new downtrend of lower highs and lower lows. With a bearish SMAX score of 3, SPX.I has been exhibiting weakness against the asset classes.

SPX.I is currently at a potentially key technical turning point. Last week’s trading bounce peaked at another lower high and the index has rolled down into another column of Os, but despite Tuesday’s selloff, support at 3,900 has held.

A break down below 3,900 would complete a bearish double bottom and signal the start of a new downleg which could potentially retest the June low near 3,635, an uptrend line near 3,500 or even 3,225, based on a vertical count and previous column highs/lows.

A bounce from here, however, would confirm 3,900 support and suggest a short-term bottom could be forming. Initial resistance on a rebound appears at previous breakdown points and column highs, plus a downtrend line in the 4,100 to 4,180 area. 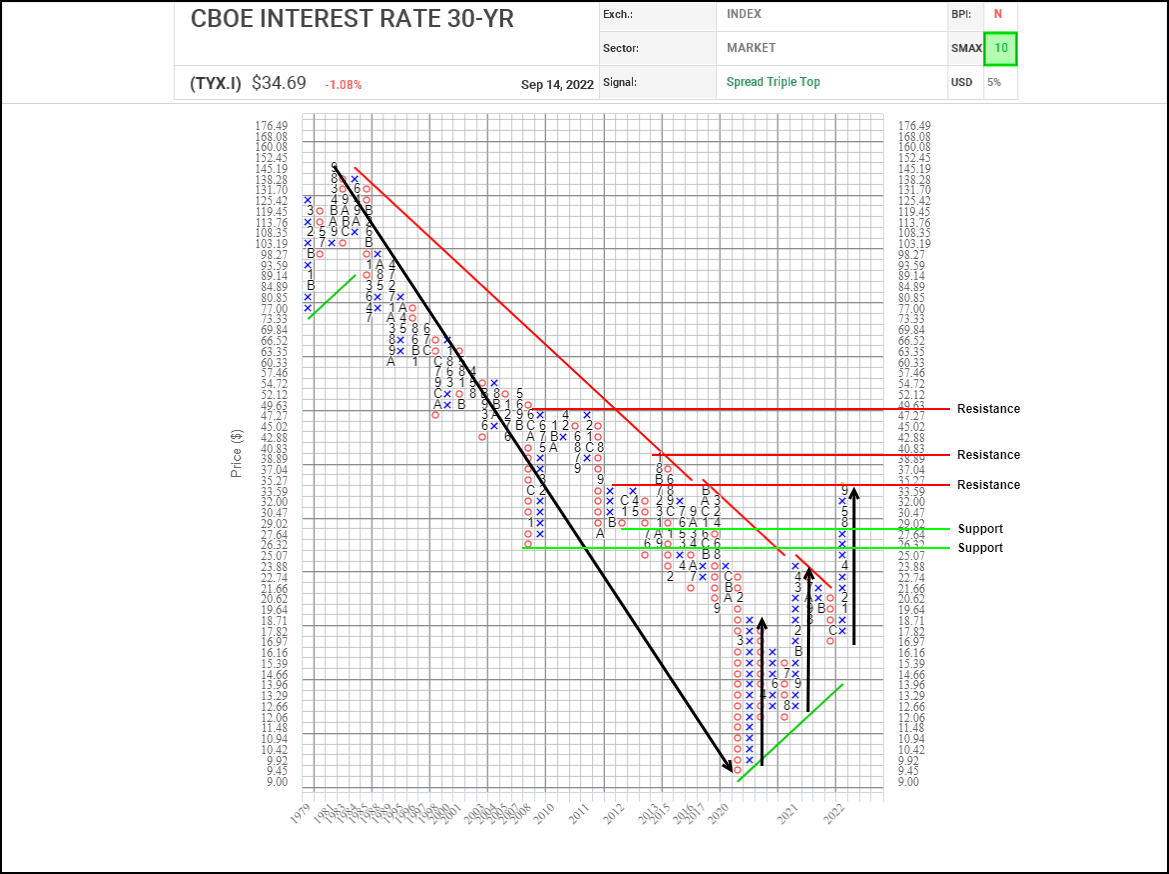 This 5% chart of the CBOE Interest Rate 30-Year (TYX.I) highlights the dramatic change in the long-term trend of interest rates that started two years ago and has accelerated this year. Dating back to the early 1980’s TYX.I had been in a long-term downtrend which became a long-term tailwind for bonds. The downtrend started at a time when central banks drove up interest rates to get inflation under control. In the later stages of the downtrend long-term interest rates approached zero and Quantitative Easing was introduced to fight off deflation.

TYX.I is currently at a potentially significant technical test, bumping up against resistance near 3.50% which has held for most of the last decade. A breakout close above 3.52% would signal that the current rally continues with next potential resistance at previous peaks near 4.10%, then the 4.75%-5.00% area. Should this level hold, however, initial support in a pullback appears near 2.75% then 2.50%.